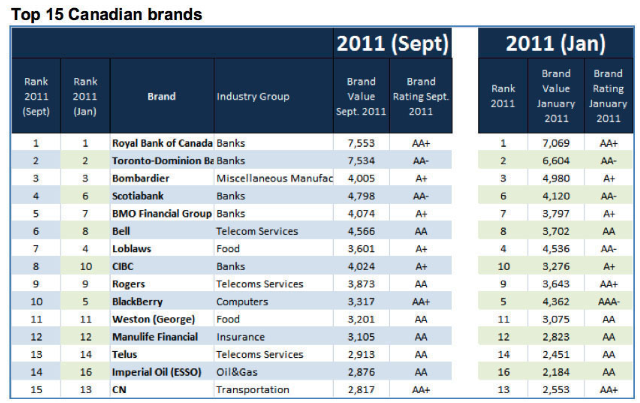 A new study has been released that shows the top 15 brands in Canada. The report was put together by Brand Finance who analyzed calculated the “strength” of a brand by organizing “detailed economic data, infrastructure data and perceptual market research data to rate and then value each nation brand”. At the top of the list was RBC, followed by TD Bank. As for the telecom sector, it was Bell (Canada’s 2nd largest carrier) who took home 6th spot overall, but claimed to be the strongest wireless brand. Rogers followed by placing 9th and TELUS came in at number 13.

For some reason – probably to gain media attention – Brand Finance decided this was a opportune time to single out and slam Waterloo-based RIM, who dropped 5 spots to the number 10 position. Kicking RIM while their down took up most of their press release and stated that “Blackberry’s dramatic decline comes as other handset providers are encroaching on the traditional B2B space, impacting handset sales. Blackberry has also failed to recently capture the hearts and minds of consumers globally in the way that Apple has managed to do.”

It’s great to see so much wireless being represent, a respectable 28% make up the top 15. Hopefully when RIM announces their Q2 results they will jump up in value, both in revenue and in the hearts/hands of Canadians.