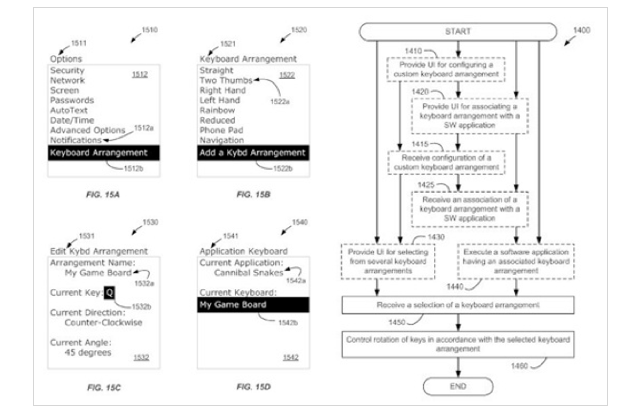 When RIM files a patent they just don’t get the same amount of attention as others do, however, this new submission to the USPTO is interesting. Last year a RIM patent that was titled “Handheld Electronic Device with Rotatable Member”. The unique aspect about this was that RIM had the idea of giving the user the ability to make the screen rotate either portrait or landscape. Now, the new “Customizable Keyboard” patent (application 20110148768) focuses in on the keyboard and how the “keys of the keyboard are rotatable”.

“A customizable keyboard for a handheld electronic device is provided. The keys of the keyboard are rotatable, either individually or in groups, either under manual control of a user of the device or by means of one or more micro-motors or solenoids controlled by a microprocessor running software on the device. The keyboard may be integrated in the device or may be detachable therefrom.”

Seems to be an interesting move: Rotatable, detachable, customizable keyboards and displays.. Is this the future devices?