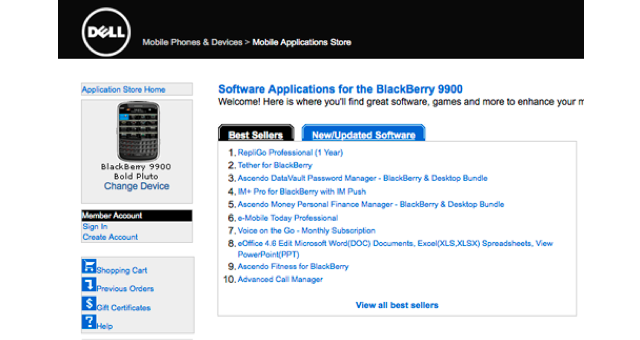 The new Dell App Store is not available yet in Canada but there are 11 carriers that do support it. Also there are over 50,000 apps available for several platforms including Android, BlackBerry, webOS, Symbian and Windows Mobile. The App Store is managed by PocketGear, not Dell. However it does give a good indication on a rumoured BlackBerry device.

If you check out the App Store here you’ll see a device that Waterloo-based RIM has yet announced or released… the BlackBerry Pluto 9900. Specs of this once rumoured device (apparently now canceled/postponed) had a 2.6-inch display with a resolution of 480 x 360, trackball, WiFi:, GPS, 3.1 mega pixel camera. The good news is that you can buy apps, the bad news is that device is not available. Perhaps RIM will release it with the new trackpad and BlackBerry 6.