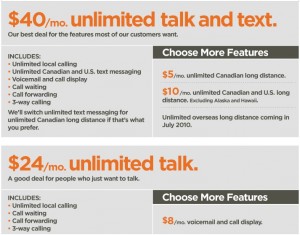 Not much more to say about new entrant Public Mobile and them officially switching on their Toronto network. Public has introduced a new $24 plan that includes Unlimited local calling, call waiting, call forwarding and 3-way calling. Add-ons like Voicemail and call display is for an additional $8 per month.They have also confirmed that a new feature will be coming out in July 2010 called “Unlimited Overseas Long Distance”.

No official word on exact subscribers but CEO Alek Krstajic said yesterday “thousands of customers signed up early”. Their Montreal network is set to go live on June 25th.