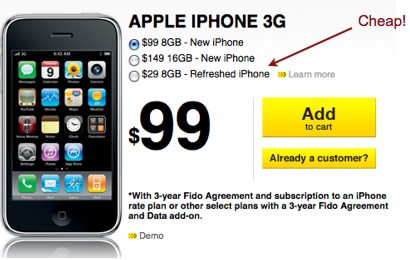 The Apple iPhone 3GS is a popular device and if you compare the speed from its previous model you’ll see how fast it really is. With speed comes an increased price. Depending which model you pick, the 3GS is roughly $100 more than the 3G. There are still many ways to score yourself a cheap iPhone and one of those options is to go “refreshed” or commonly known as refurbished.

Originally when Rogers and Fido started to offer the “refreshed” iPhone 3G 8GB it was priced at a low $49… but checking out the Fido site I noticed today that the price dropped by $20 to a very low $29! Now that’s a pretty good deal if you’re looking for an iPhone and feel comfortable getting a refurbished device.

Just so you know what you’re in for when you get a Fido “refreshed” iPhone:
– Phones do not come with ear phones or other accessories
– iPhones are preloaded with current software and have been extensively and independently quality tested.
– Refreshed iPhones carry a warranty of 6 months from the date of shipment
– Refreshed phones are phones that were returned by customers within 15 days from the date of activation.
– Either unused or lightly used and they must pass rigorous final Quality Assurance testing before their sale.
– Some refreshed iPhone 3G devices will have final scratches

Check it out here at Fido