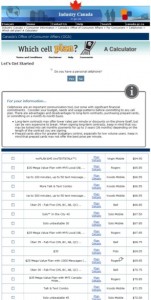 Coming right after the CRTC squashed Globalive’s plans to launch their Wind Mobile brand, Liberal consumer affairs critic Dan McTeague said in a statement yesterday that us Canadians “have a real competition problem in this country that is reflected in the high prices Canadian consumers pay for service. We need some real action with concrete proposals to lower prices and improve cellphone and internet service for urban and rural Canadians.”

The Liberals want clear rules and force the current cellphone companies to share their cellphone towers and sign equitable roaming agreements with the new wireless carriers. In addition, McTeague wants to launch the much failed government online cellphone calculator.

Regarding his request for the cellphone calculator, Lord said “The online tool was so limited in its scope and ability that it would have been completely ineffective, and it would have hindered rather than assisted consumers with making informed purchasing decisions.”