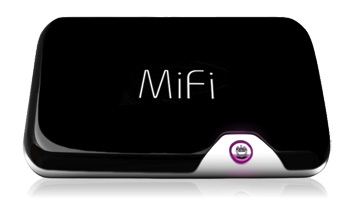 Bell officially announced they will launch 2 new products when they launch their HSPA network in November. The first is the Novatel U998 HSPA+ Turbo Stick and the MiFi 2372 Intelligent Mobile Hotspot.

The U998 is exclusive to Bell and we’ve mentioned it before here. The MiFi 2372 is a portable Wi-Fi hotspot that allows up to five devices to be used at the same time from anywhere. With data speeds of up to 7.2 Mbps downlink and 5.76 Mbps uplink, the MiFi is compatible with Windows and Mac operating systems and can hold up to 16GB of memory with a microSD.