Saints Row is much more fun and engaging than I expected

There's been a fair amount of apprehension towards this reboot, but after playing it for nearly four hours, I've found there's a lot to like 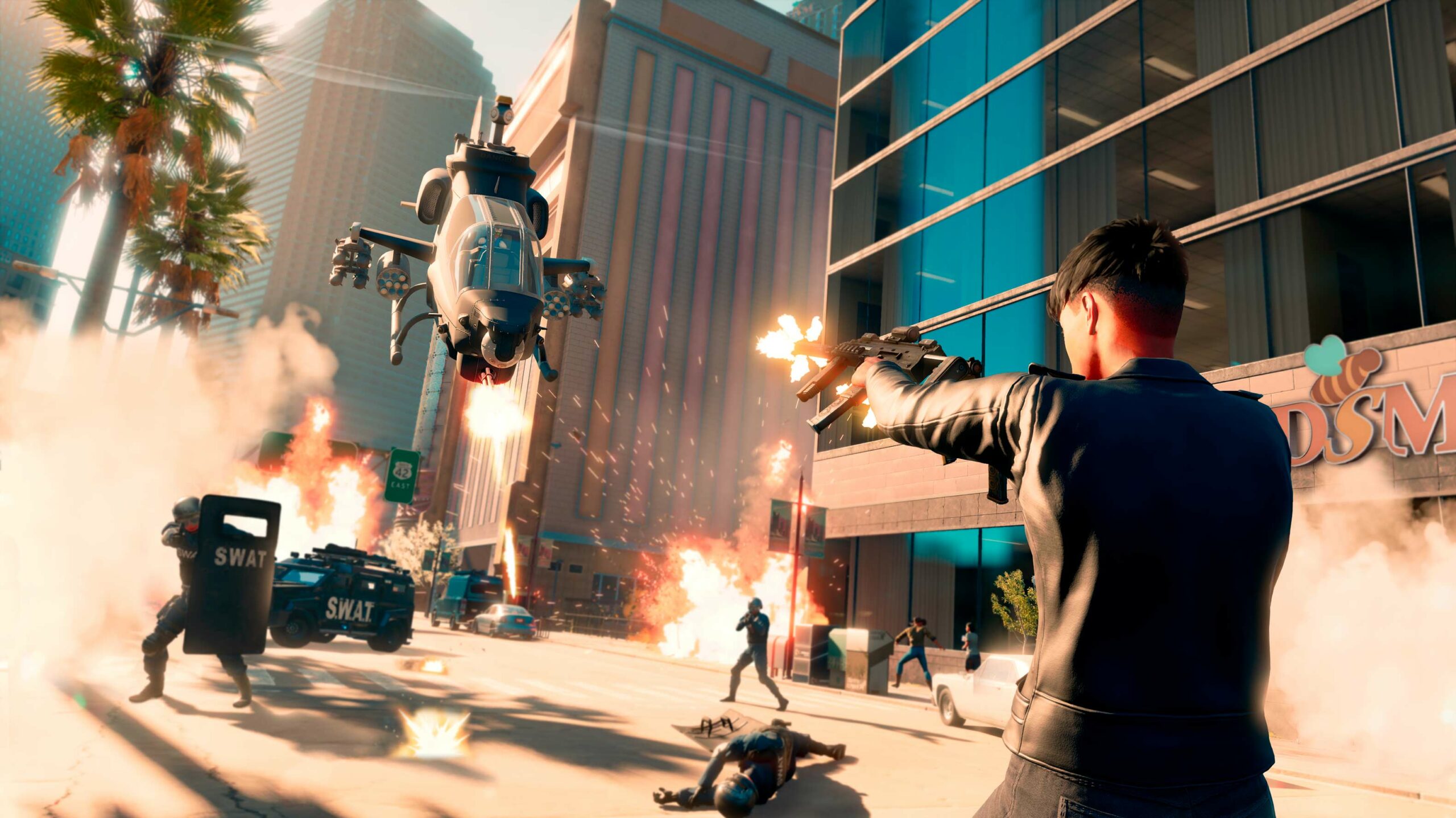 Where do you go when the last mainline entry in your series had your main character becoming the U.S. president, getting superpowers and thwarting an alien invasion?

That’s the question developer Volition had to ask when rebooting its popular Saints Row series after 2013’s Saints Row IV. After all, how much more outlandish could you get? Even as someone who enjoyed that delightfully ridiculous premise, the series clearly needed a reinvention.

It’s for that reason that I’ve been more open-minded about the reboot, simply titled Saints Row, as others have been skeptical. And after playing about four hours of Saints Row (2022) at a Las Vegas preview event, I’ve come away quite pleased with the new direction.

I don’t have friends — I got family 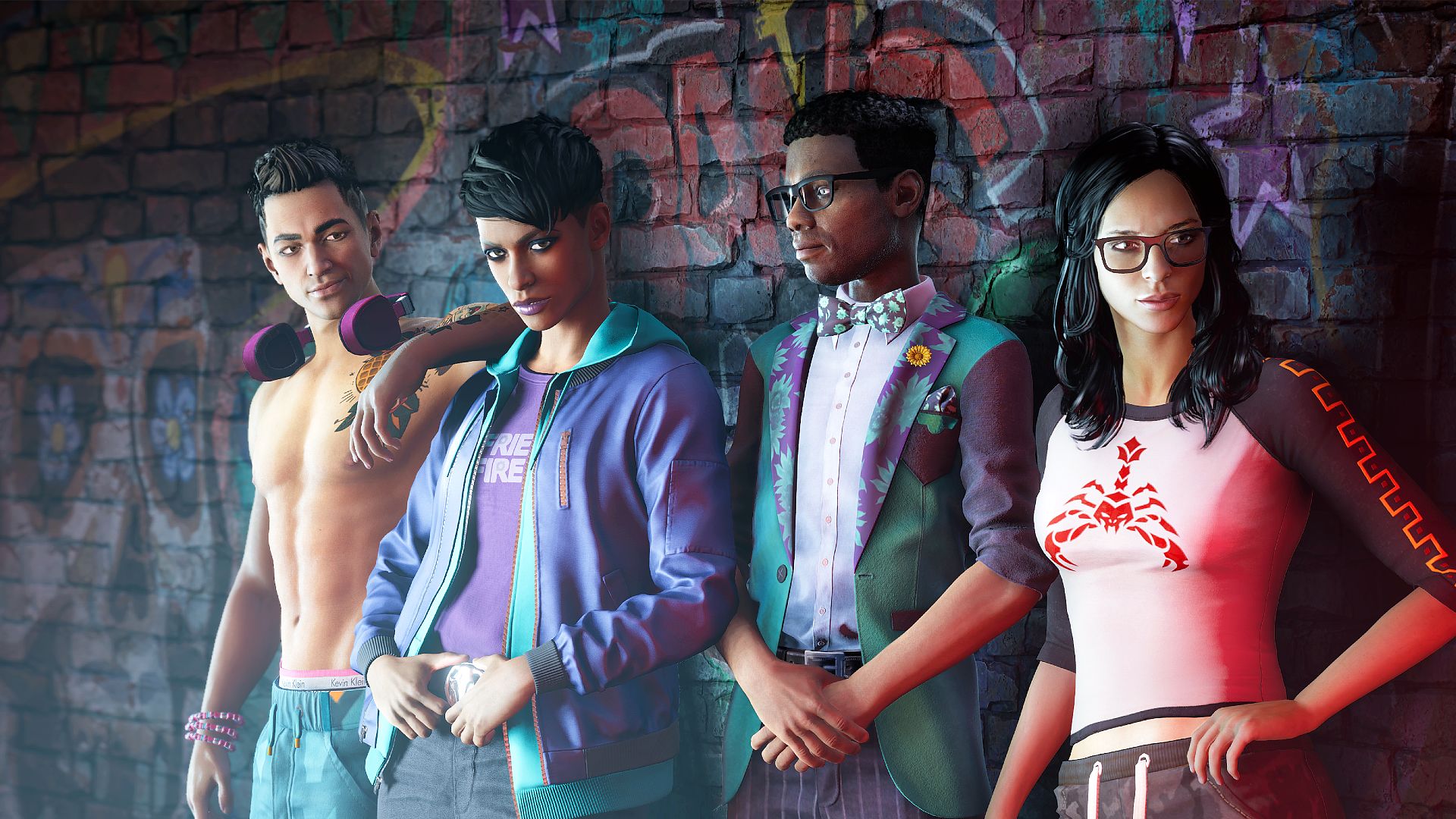 From left to right: Kevin, one possible version of The Boss, Eli and Neenah.

What’s impressed me the most so far, remarkably, is the storytelling. I’ve always enjoyed the irreverent humour and charming characters of the Saints Row series, but I don’t know if you would call any of that particularly grounded or relatable. Much to my surprise, then, was the fact that Saints Row (2022)’s first mission follows your character — a fully customizable avatar once again called “The Boss” — on their first day at the Marshall Defense Industries mercenary company, begrudgingly taking orders from a superior. Why? To pay rent and student loans. Indeed, this Boss isn’t a gangbanger; they’re practically broke and living with three equally cash-strapped roommates in the fictional American Southwest city of Santo Ileso. “I’m not sure [about] the back story of Johnny Gat but I think these characters might be a little more relatable. I don’t know if [Saints Row fan-favourite character] Johnny Gat had student loans!” quips Cailyn Talamonti, Saints Row UI artist, during a group interview with MobileSyrup.

Early on, there are several scenes between this group, which includes mechanic Neenah, DJ Kevin and entrepreneur Eli, that lend Saints Row more heart than I was expecting. Between Kevin cooking shirtless for the group to give them “dinner and a show,” The Boss busting Eli’s balls for caring about the “carbon footprint” of the car they steal or the ways they try to help a defeated, bed-ridden Boss after they’re fired, each character has a lot of personality that really shines during their rapport.

They also all come from different backgrounds and even belong to the three rival factions of Santo Ileso: The Boss at the aforementioned Marshall, Neenah with the vehicle and fitness-oriented Los Panteros and Kevin from the partygoing Idols. Taking a few hours to develop their camaraderie is important, because it explains the team’s decision to quit their jobs after The Boss is fired to start their own criminal venture. Centring Saints Row (2022) around the formation of a new Saints was quite brilliant; instead of joining a pre-existing gang like in the series’ first game, you get to be there from day one with these scrappy upstarts. They’re not super deep or anything (at least so far), but the characterization has nonetheless been quite pleasurable.

Making the new Saints Row feel even more personal is its character creator, “Boss Factory,” which is one of the most in-depth I’ve ever seen. For one, it’s refreshingly inclusive — you can tailor your character using different body sizes; races; gender-neutral sliders to let you mix and match “masculine” and “feminine” traits; customizable prosthetics and even skin conditions like vitiligo. “We didn’t want it gender-locked; it’s much more fluid just to have the triangle with the different body types, and then being able to adjust the rest of it,” says Talamonti.

“I think [Volition] wanted to take anything that existed before and just multiply it and make it greater and make it more inclusive. Because we really want ‘Be Your Own Boss’ and to be ‘self-made’ to apply to everybody and to be able to see everybody and have people see themselves in-game. I think that was one of the touchstones of customization in this game: to be for everybody. Of course, there are things in there — candy corn teeth, for example. I’m hoping no one in real life has those! [But] it means a lot to the whole studio to be inclusive, but also take it a step further, and be fucking weird.”

To that point, I’ve also seen hilarious — and exceptionally accurate — recreations of all kinds of recognizable pop-culture figures, like Shrek, Billy Butcher from The Boys, several Time Lords from Doctor Who, Thor from both Avengers: Endgame and Love and Thunder. You also have a lot of freedom to deck out your guns with all kinds of decals or even turn them into other weird objects, like foam fingers. To save time during my demo, I went with a gleefully potty-mouthed English lady who used basic firearms, but I definitely plan to go wild in the final game. And as a nice touch, Volition has even released a free Boss Factory suite to let you sample the robust tools and import your character in the retail version, with the option to freely and fully re-customize your character later on. 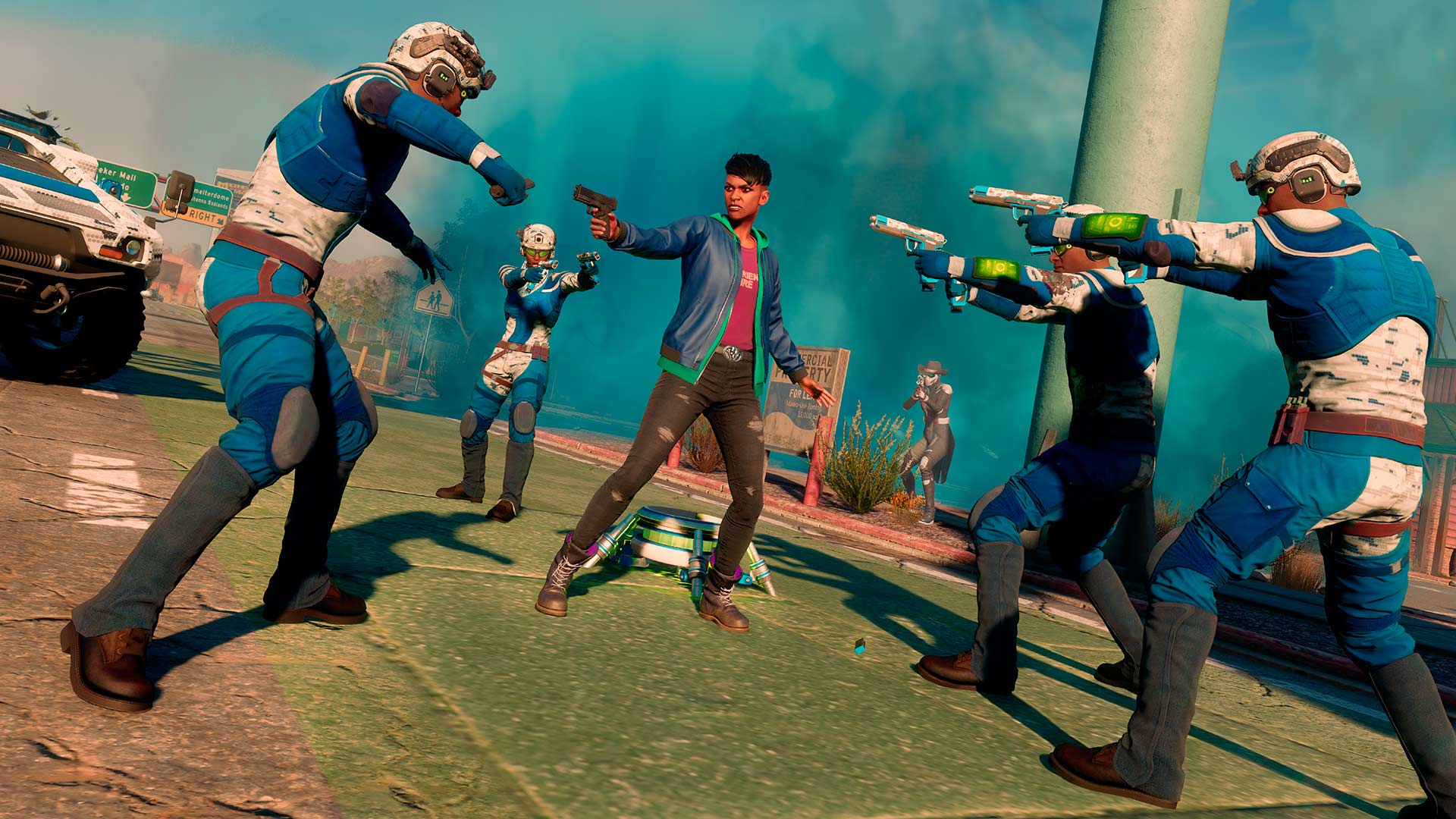 The Boss with some Marshalls.

The idea of being “self-made” that Talamonti mentioned is something that’s been brought up a lot by Volition during the promotion of Saints Row (2022). It’s a core theme that runs throughout the game, and it’s what’s ultimately won me over to this take on the series. Not only does this mantra apply to our four leads and the character customizer, but pretty much all other facets of Saints Row‘s gameplay. Sure, at a base level it’s quite similar to previous games in the series. An open-world sandbox? Check. Third-person shooting mechanics that are a little loose and janky? Yup. Arcade-y but solid handling of vehicles? You bet. That’s why it’s odd to me that people are so up in arms about the new game. Even if you don’t appreciate the different approach to story like I do, the core gameplay is still quintessentially Saints Row.

It’s all of that, with just a bit more depth. As you play, you’ll unlock points that can be used towards new skills for The Boss. These include active abilities like a Street Fighter Shorukyen-esque flaming uppercut, and passive ones like increased resistance to flames. The Boss can also perform finishers that mix John Wick-style “gun fu” with good old-fashioned haymakers, dropkicks and more.

You can really see the Saints Row DNA of wacky combat here; there’s nothing quite as ridiculous as a giant dildo bat or dubstep gun, but you still get some over-the-top moves — and more options to customize them, at that. I appreciated having this more varied arsenal since the initial lineup of guns — a pistol, assault rifle and shotgun — are pretty boringly standard. Grenades also still have that goofy, awkward throwing animation from older games. These gripes aside, though, I’m looking forward to seeing what other abilities there are later in the campaign, especially since the early ones are so promising. 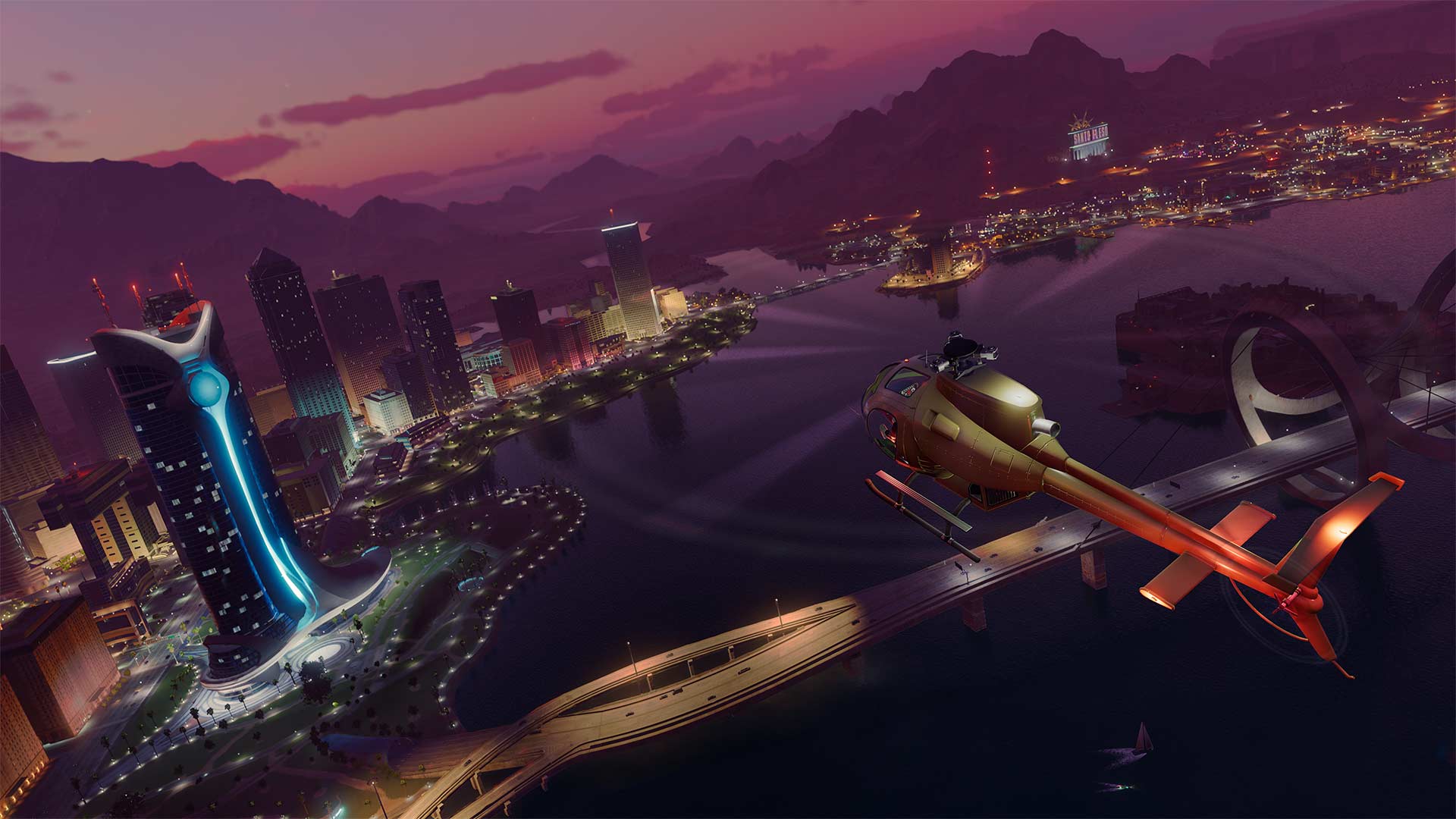 Having just been there, I can say this sure does look and feel like Vegas.

The real highlight of the reboot’s gameplay for me, though, is Santo Ileso itself. With so many open-world games set in bustling, New York-esque cities, I admire Volition’s desire to take Saints Row to a Las Vegas-inspired desert locale. On a narrative level, it gives our “heroes” a smaller, rural apartment to start off in that juxtaposes well with the more urban areas they’ll head break out into. But beyond that, this variety just makes Saints Row more enjoyable to explore. Since our event was held in Vegas, I was able to see firsthand how well Volition drew from Sin City. Saints Row (2022) might not be very graphically impressive, but the developer more than makes up for that through a rich, dense setting that features pretty sun-soaked mesas, dusty, tumbleweed-filled streets, dingy motels and wedding chapels and neon-soaked, casino-filled downtown strips. The commendable mission variety — which includes a sandstorm-covered desert convoy raid, small-town police chase and linear saloon shootout — only further highlight the heterogeneity of this world.

If all of that wasn’t enough, Volition has given us some wonderfully entertaining ways to explore said locations. Chief among these: a wingsuit, which you have right from the start. In typical Saints Row fashion, the physicsare hardly realistic, but that just makes it even more of a blast to use. Not since the Batman: Arkham games have I had this much fun gliding around a city, freely diving and pulling up and twisting and turning to maintain altitude. It’s also just a smart way to strike a balance between the crazy superpowers of Saints Row IV and the (slightly) more grounded vibe of the reboot. Meanwhile, you’ve got a diverse vehicle lineup that consists of standard four-wheelers and trucks to golf carts, monster trucks and sports cars. These are all highly customizable in both look and function, and I was particularly happy to see that you can deck your car out with a tow cable, tire spikes and even an ejector seat to quickly get you airborne for some wingsuit action. Specific launching pads and shortcuts to high rooftops are also available for that purpose. 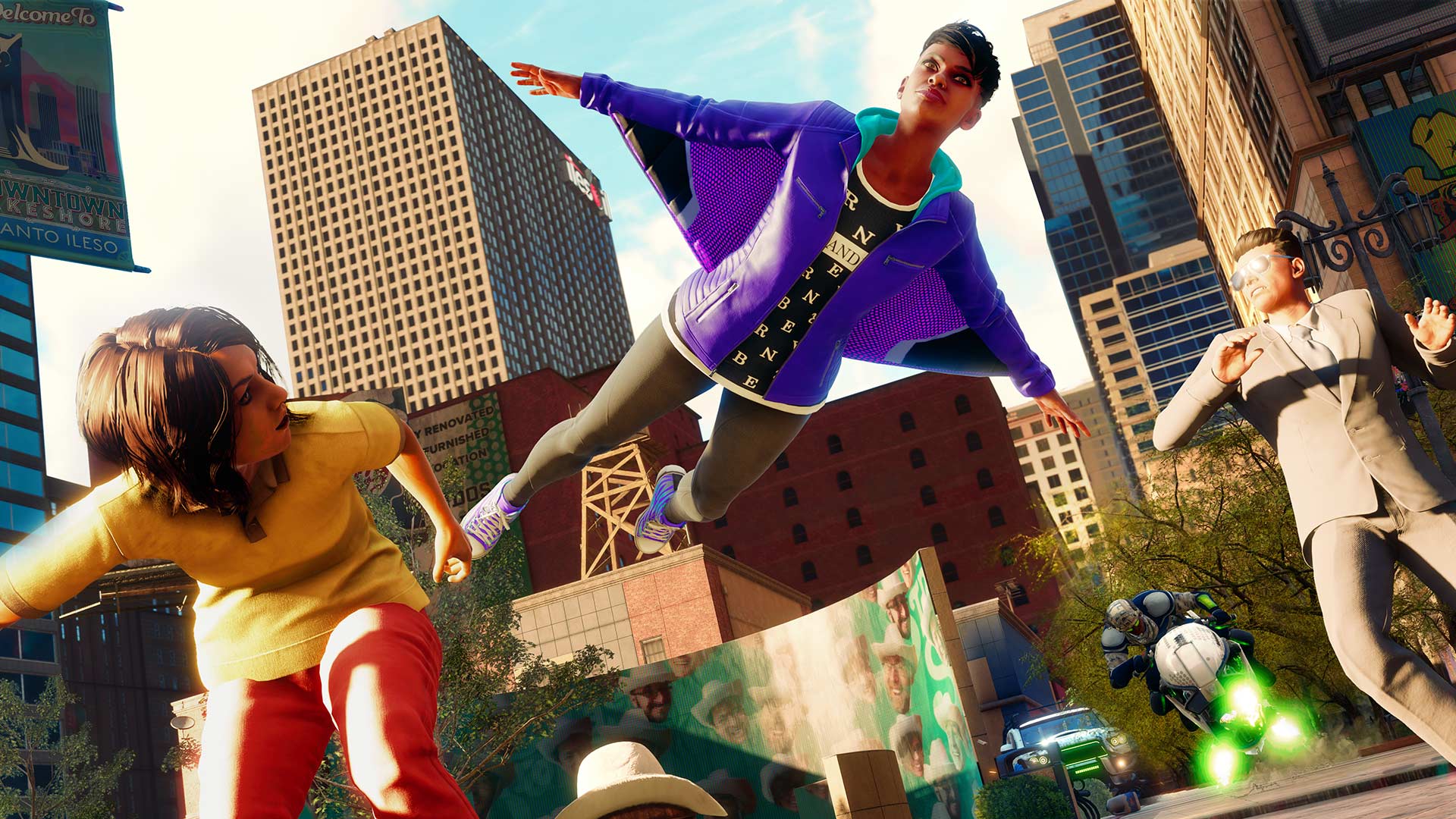 But perhaps the coolest feature of Santo Ileso is how you yourself can affect it. And I don’t just mean in a “blow shit up” sort of way, which you can absolutely do, or taking over territory from the other factions, as in previous Saints Row games. No, what Volition has done in the reboot is allow you to dictate what optional content populates the world and where they’re located. These  ‘Criminal Ventures’ can be planned out once the Saints find a base of operations (which is itself customizable to a degree with various interior decorations) shortly after they all decide to quit their jobs. These side activities are unlocked through properties you construct on open lots.

It’s a fascinating and clever way to let you tailor the experience; if there are certain gigs you prefer over others, you can prioritize filling Santo Ileso with those. Naturally, I opened a medical clinic to unlock Insurance Fraud, a returning — and absolutely bonkers — mode from previous Saints Row games. In this minigame, you have to cause as much damage to The Boss as possible by letting yourself get run over, blown up and all kinds of other masochistic exploits. Amusingly, the doctor at this clinic even pointed out that there are easier and less painful ways to commit insurance fraud, to which The Boss said “you do it your way, and I’ll do it mine.”

The best of both worlds — so far

Now that I’ve had a few days to reflect on my time with Saints Row (2022), I find myself remembering just how much it kept me entertained. Is it the most technically impressive or mechanically sound game? Definitely not. But it’s an admirable effort by Volition to combine the zaniness of past Saints Row games with a more endearing story and deeper customization of character  and setting alike. It remains to be seen how well all of this will hold up over an entire open-world experience, but for now, I’m here for the ride.