Weird West puts the wild back in the west

Balancing the elemental chaos of a CRPG with the combat of a twin-stick shooter, this is an immersive sim worth your attention 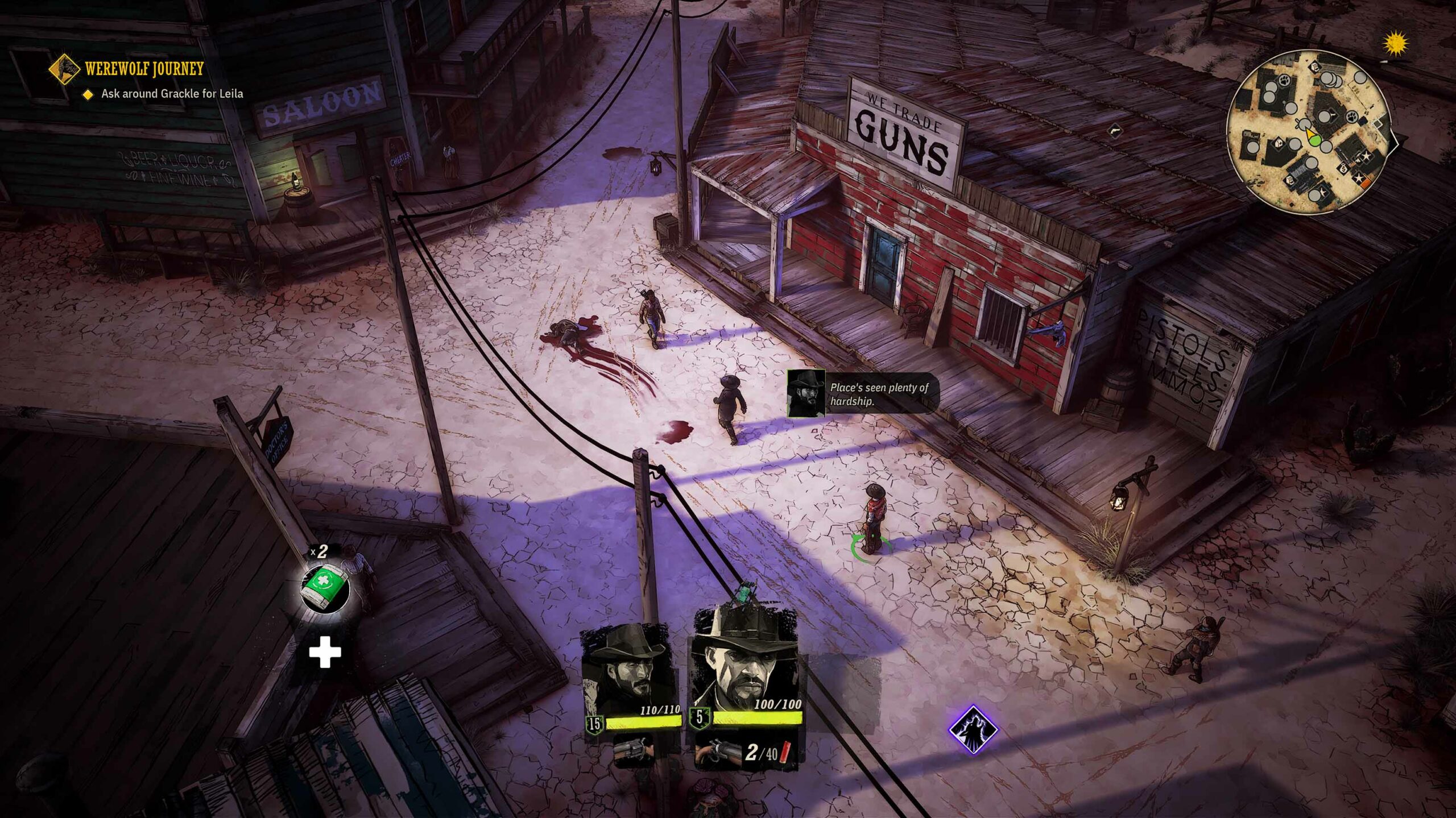 I’d never seen a dead horse used as a weapon before. Now I’ll laugh every time I hear the word horseplay. And neigh, I don’t think that makes me crazy. At least not in the world of Weird West.

Weird West is the kind of game where you try to steal a bottle of whisky, but end up killing half the town by setting the bar on fire instead. You can play the game carefully and get through the story unseen and unscathed. Or you can get weird — it’s all up to you.

Developed by Wolfeye Studios, Weird West takes the immersive sim genre to new heights. It’s a fascinating blend between western and gothic horror that gives you a wide array of tools and sets you free into its world. More than any game I’ve played in recent memory, it offers a true sandbox.

The game starts with you waking to the sounds of your husband being kidnapped and your son being murdered. After a few quick tutorials to introduce the combat mechanics, travel system and character upgrades, you’re let loose. It’s up to you whether you want to go after the culprits, take on bounties, or set off in a random direction on the map. No matter what you choose, you’re sure to encounter scenarios that will test your creativity, skill and luck.

The most immersive of sims

For those unfamiliar with the genre, immersive sims are built on the idea that players should be able to approach a situation in any way they see fit. Popular games in the genre include Deus Ex, Deathloop, Dishonored, and Prey. The last three of those were made by Arkane Studios, a studio co-founded by Wolfeye Studio’s Creative Director, Raphael Colantonio. Their current team might be a bit smaller, but that also means they have more creative freedom. And immersive sims are all about freedom. Whether you want to go in guns blazing or take the stealthy route, the genre is defined by giving player’s as much freedom as possible when it comes to gameplay. Weird West encourages outside-the-box — even if that means performing heinous crimes.

Early in the game, a text box pops up telling you that you can kill anyone you meet — even important story characters. And they weren’t kidding. If you want to walk into a random town, murder everyone in sight, loot their bodies, and sell their belongings back to their families, you can. It’s not just about violence, though. You can often find solutions to problems by exploring the environment, making friends, or just being patient. The game is built on a set of rules. It’s up to you to manipulate those rules to your advantage.

If you really want, you can play the entire game without killing anyone. Or so the developers say. I’m having way too much fun being the monster of the west to try it out. 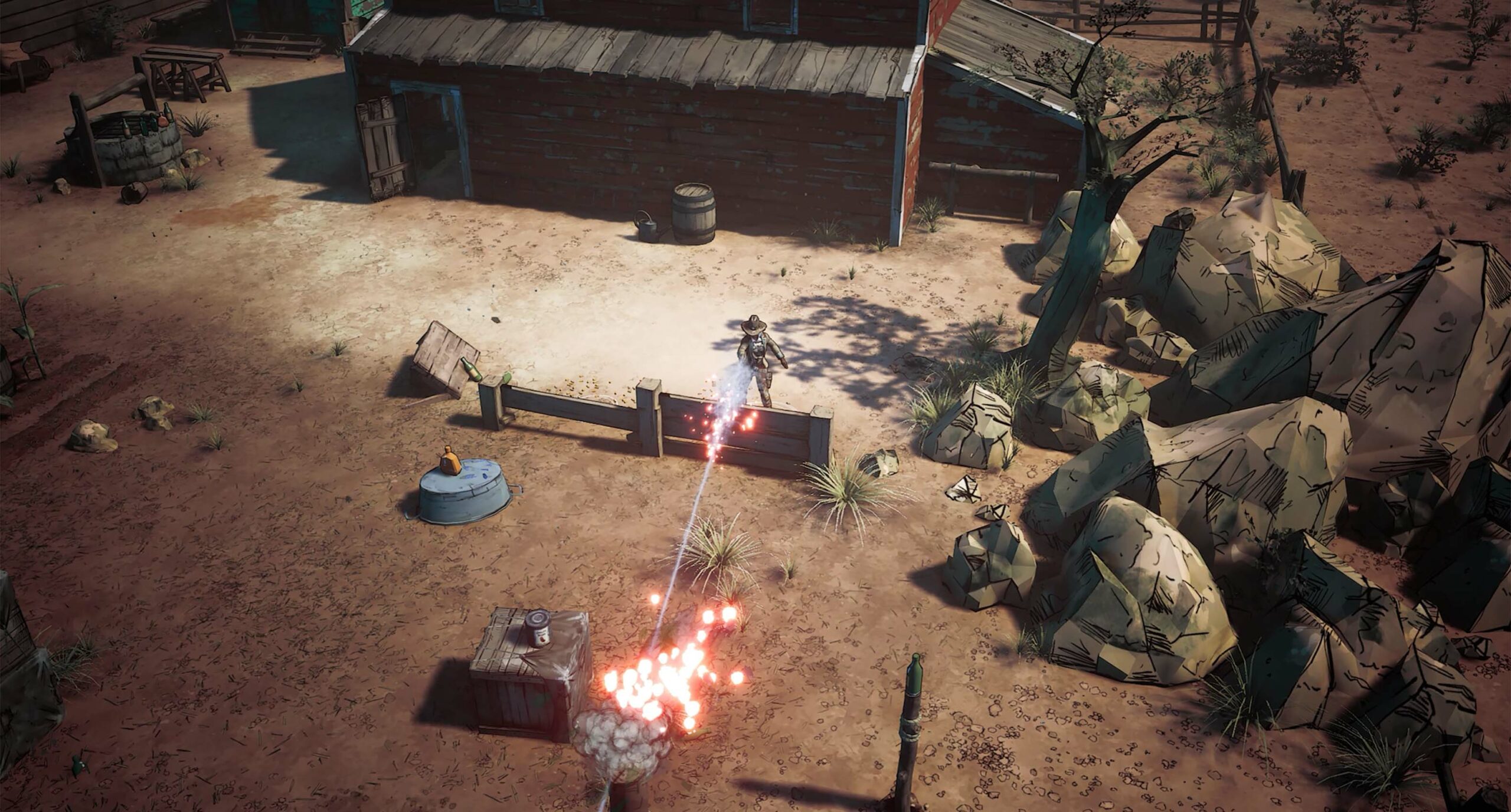 Thanks to some smart decisions by the developers, Weird West‘s systems truly feel like they’re reacting to your decisions. This isn’t a high budget first-person game that needs detailed textures to achieve a sense of immersion. By cutting out unnecessary features and expensive elements, they were able to create a focused adventure that has a much grander scope than its AAA counterparts.

Despite foregoing voice acting for the most part, the game manages to create an intoxicating atmosphere that’s hard to pull yourself away from. The writer’s have done an excellent job keeping the dialogue to a minimum while still offering plenty of lore, world building, and character to the proceedings. The lower production quality is well worth the tradeoff in terms of scope and player consequence.

What was that about a flying horse corpse?

At its most basic, Weird West is a real-time twin-stick shooter with special abilities, branching dialogue, and a lot of explosions. More broadly, it’s a world where your demons are set loose. And it feels so good.

But be careful. You’re not the only one with a dark side. Walking over to the sheriff’s office, you’ll find a board with bounties on it. Take those on and you’ll reap the rewards. Fail to put your target in the ground in the allotted time though and the hunter will become the hunted.

Go to the local gun shop and you’ll find your wallet instantly lighter as you stock up on the finest barrels and bullets. But at any moment, you might find yourself at the end of another’s shiny barrel. 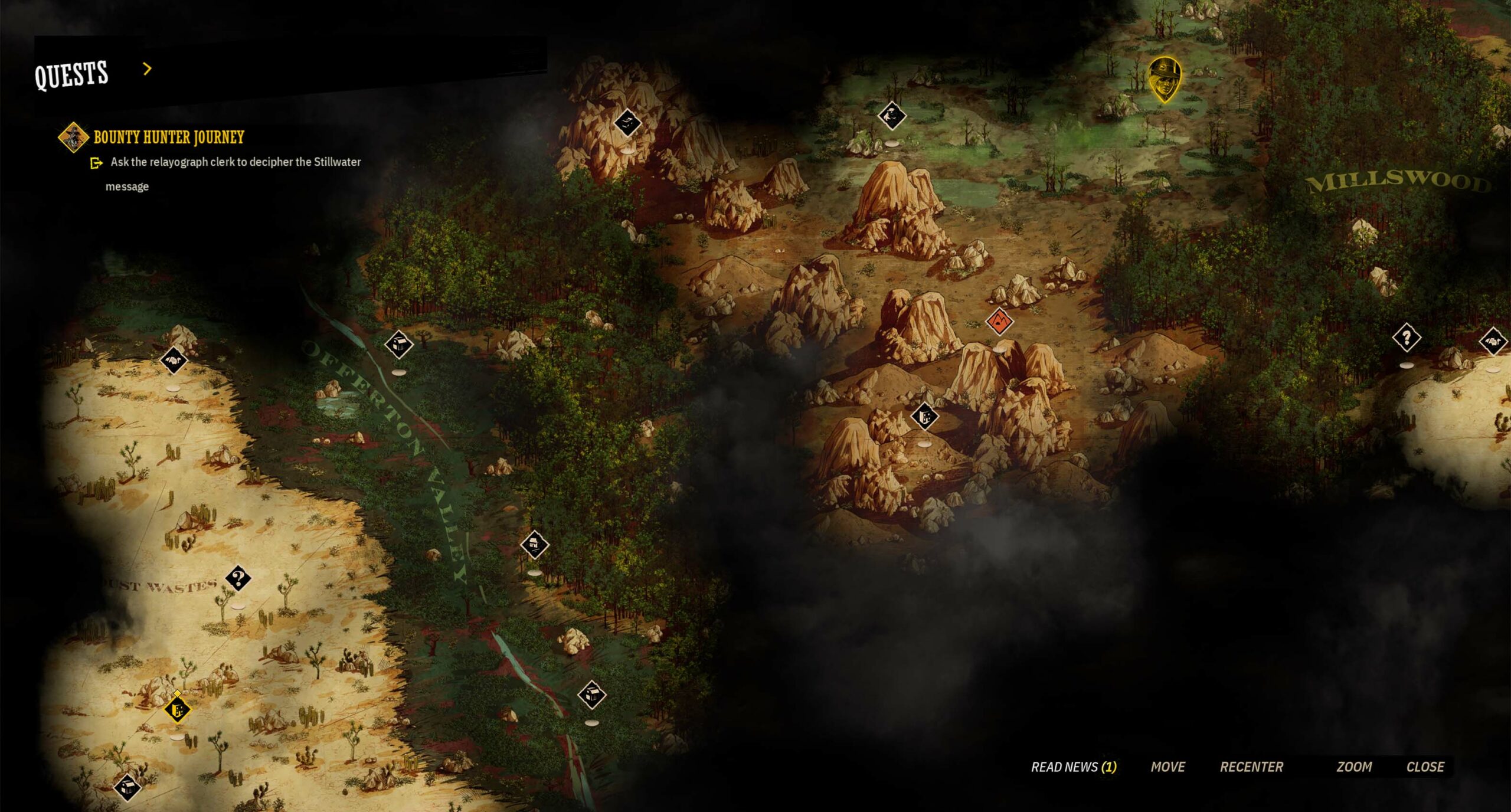 When you decide to brave the wilderness and travel to your first destination, you’ll be faced with a new reality — one filled with all sorts of creatures and con artists. Travelling not only takes time, but puts you at the risk of random encounters. If you stumble across a band of robbers, you’ll need to either pay them off or settle for the smell of gunpowder.

Not all encounters are bad though. There are teasures to be had, and mysteries to unravel. Some of the best mysteries in the game come from these random encounters, and they may take hours to pay off. They’re never more than a minor deviation from your path, but they always carry the risk of using up your supplies before you reach your destination.

Once you do, it’s time to get to work.

All in a night’s work

Weird West is all about making decisions.

Let’s say you’re tasked with rescuing a prisoner from a gang out in the badlands. You can wander in, light some dynamite, and pick off your foes as the gang members descend on you in droves. This is a totally viable strategy if you’re well equipped and use your abilities effectively.

Alternatively, you can sneak into the compound, lower a rope down the well, lockpick the door to the holding cell, and distract everyone by blowing up their distillery while you escape.

Or if you don’t want to risk either of those, you could seek out a nearby saloon, get one of the gang members drunk, steal their possessions, and use map and key you find to enter the hidden entrance to the holding cells without anyone being the wiser.

Not every scenario offers this many options, but even if there aren’t planned variations by the developers, your choices are still nearly endless. Every environment in the game is a combat zone if you try hard enough. 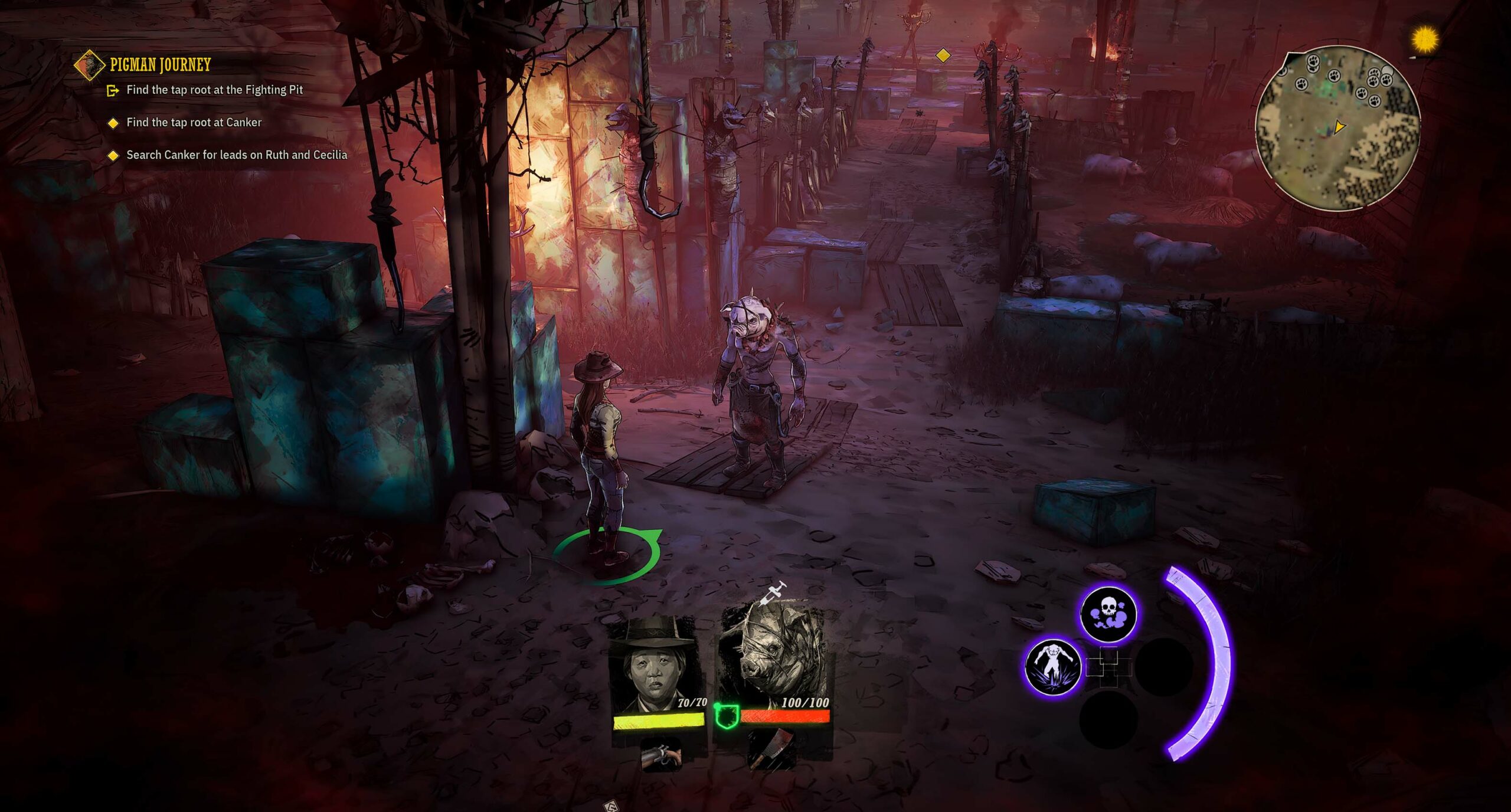 This is one of the first immersive sims where I chose violence as often as I sought out a peaceful solution. The gunplay is satisfying, the abilities make you feel powerful, and dynamite makes things go boom.

However, while controllers can be used, playing with one on PC is far more finicky than using a mouse and keyboard — something you don’t often hear for twin-stick shooters. The aiming doesn’t feel tight in the way that something like The Ascent did with a gamepad. And not being able to remap the controls is something I’d really like to see added in a patch down the road. With a mouse and keyboard though, the combat manages to balance careful decision making and frantic real-time combat.

Or more often, those careful decisions are what lead to combat. I really needed some money to buy bullets for my rifle at one point, so I decided to steal from the local saloon. I went behind the bar and attempted to grab a bottle of whisky without anyone noticing. Well, next thing I knew guns were drawn, and I was shooting my way out of the bar.

And that’s when I accidentally shot the oil lamp.

The entire bar went up in a blaze. I ran outside, chased by the surviving patrons. Luckily for me, they were dead drunk, so a lot of their shots missed. While they were missing me though, they were hitting everything else, including my horse. One of the drunkards lobbed a full stick of dynamite in my direction. It sailed right over my head, landing at the hooves of my now dead horse. The explosion sent him careening through the air, taking out the very person who threw the dynamite. Incredible.

Give loot the boot

Not all encounters are this lively though, especially in the early game. You’ll spend a lot of time slowly sneaking up behind people and knocking them out before they can react to save on ammunition. There’s not much to the stealth here. It’s a lot of hiding in bushes, waiting for the moment to strike, and dragging bodies out of sight.

But that’s not the real issue. The problem is the pacing outside of combat and conversations. And it comes down to one thing: loot.

Like many games in the genre, Weird West requires you to loot every nook and cranny in its world to find the best gear—and to maintain your supplies. If it had a better inventory system this might not have been too much of a pain, but by the twenty-hour mark, I was sick of looting bodies in the hopes of a shiny upgrade. I never want to see another deck of cards. 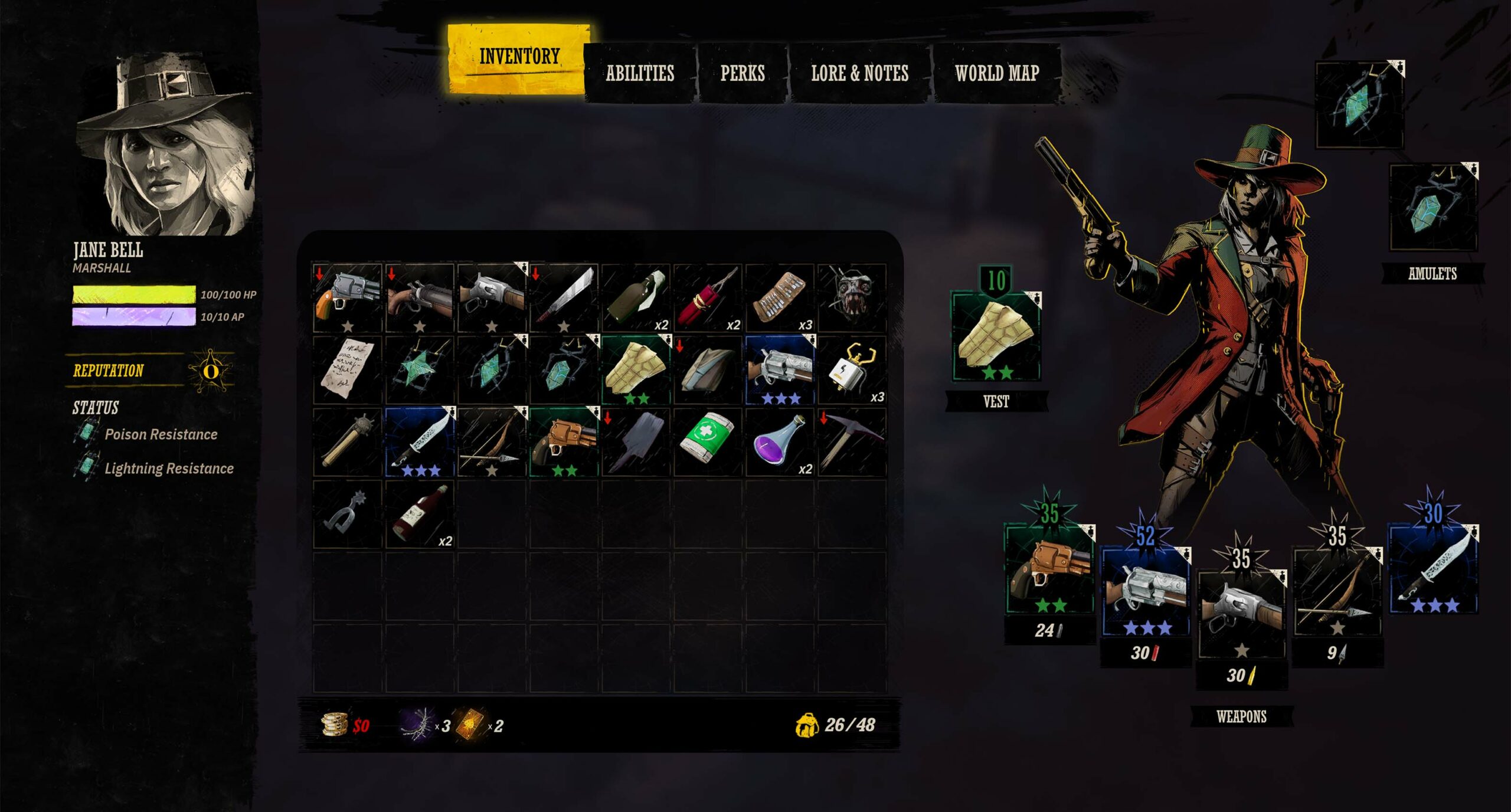 When you’re not looting though, the game manages to find ways to make most moments engaging. At any moment hell can break loose. And it’s in those moments that Weird West is at its best. They may not be constant, or even consistent, but they add up to create an unforgettable experience.

That’s also in part thanks to the music. The moment the music kicked in for the first time, I could tell that I was in for something special. It was simultaneously foreboding and inviting. An odd mix of western and electronic that I hadn’t heard before. So far, this is the soundtrack of the year for me. Paired with some great writing, it’s a world that’s hard to shake.

I touched upon it earlier, but the writing manages to set an ominous tone without overstaying its welcome. Most conversations only last a minute or two, though the characters will linger in your mind much longer. It isn’t the kind of story that had me emotionally invested in every story beat, yet I found myself eagerly anticipating the next major moment. There are plenty of surprising revelations that shine a new light on the world of Weird West. It might not be at the forefront of the narrative conversation this year, but the writing here shouldn’t be overlooked.

This is a world where it isn’t unusual to run into cannibals, werewolves, witches, and cults. Heathens, hounds, and hallowed souls are bound to threaten your life. And you’re connected to many of these supernatural elements.

Throughout Weird West, you won’t just play as one character, but five. While you start as a bounty hunter with an unnatural aptitude for firearms, you’ll inhabit several other beings as well. Each presents a new view of the world and the battlefield. Don’t expect the same strategies to work for every character. And don’t be afraid to experiment.

That’s why I haven’t completed the main story of Weird West just yet. I have countless saves, replaying the same scenarios over and over again to see what the game would let me get away with. And it turns out, it’ll let you get away with almost anything. After all, it’s the wild west.

Even though I’m in the last couple hours of the main story, I’m far from finished with the experience. It’s the rare game where I don’t feel the need to be the good guy. Because you are held accountable for your actions, punished for your sins, and praised for killing those who dare attempt to dole that punishment out.