Women game developers -- a force to be reckoned with 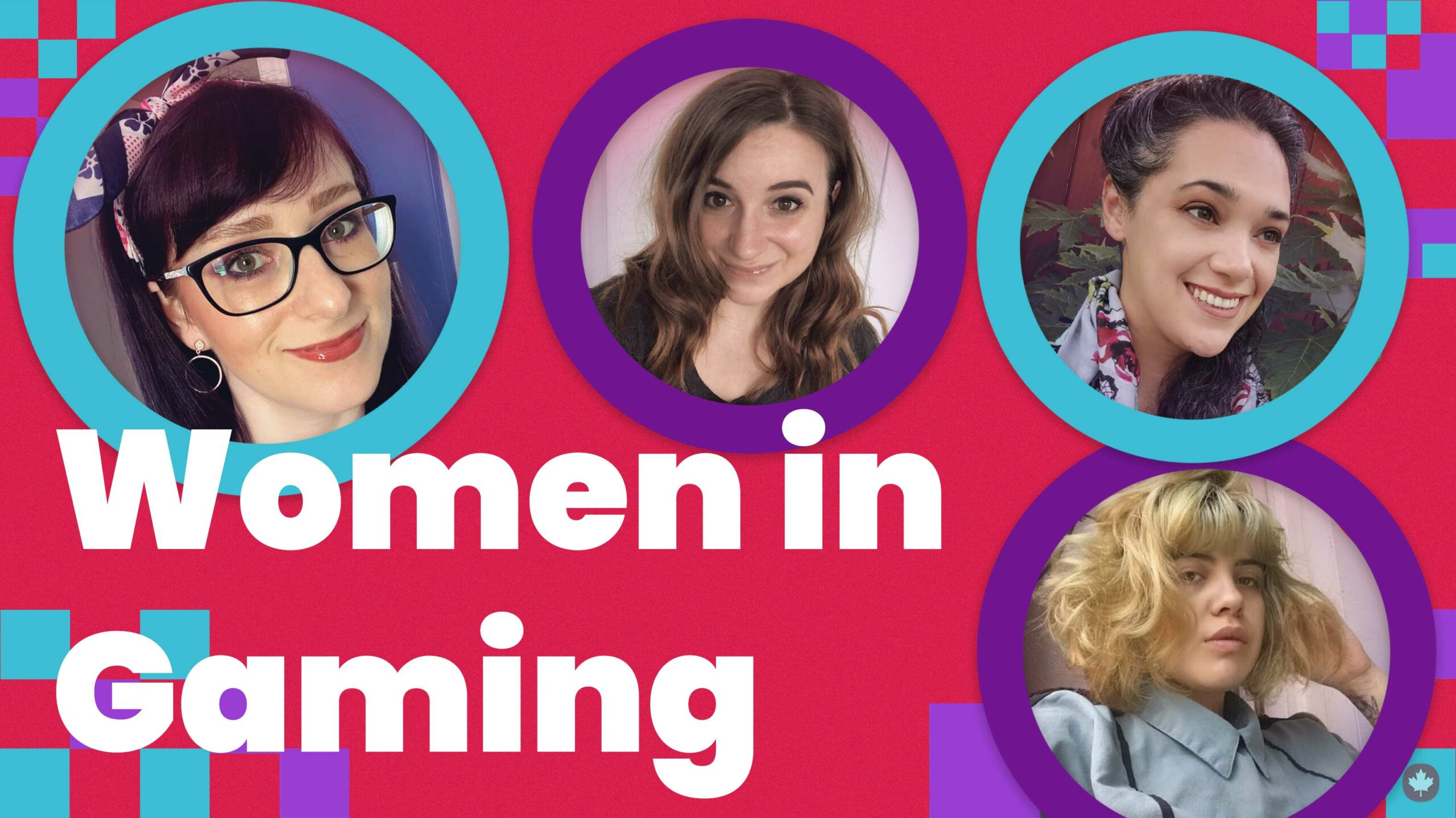 Over the course of the pandemic, more Canadians have picked up their controllers while being stuck at home, often indoors, leading to an increase in sales across the video game industry.

According to a report from the Entertainment Software Association of Canada (ESAC), 58 percent of adults and 80 percent of teenagers have been playing more video games during the pandemic. Further, roughly two percent of Canadians between the ages of 18 and 64 have tried video games for the first time.

Although gaming is often assumed to be an entirely male-dominated hobby, there are more female gamers than some might think — especially in Canada. For example, the report outlines that 58 percent of Canadian women between the ages of 18 to 34-year-old consider themselves gamers. According to a report Sony made for investors, only 18 percent of original PlayStation owners were women, which has increased significantly as around 41 percent of PS5 and PS4 owners are women.

There’s also a significant group of female game developers making an impact on the gaming industry.

Angela O’Hara, a lead artist at Canada’s Big Viking Games, has been working as a video game developer for eight years.

“There’s always a male bonding aspect to the game industry that was not accessible to me.” — O’Hara.

Growing up, “I spent a lot of time watching [my brothers] play games but not actually wanting to play myself. I was a bit intimidated by [the games],” said O’Hara in an interview with MobileSyrup.

Bioware Edmonton’s 2009 title Dragon Age: Origins was a game-changer for O’Hara. After her husband introduced her to the game, she spent countless hours playing it and started to look for other similar action RPGs.

“In the time that I’d spent away from video games, there [was] a whole world of games that were actually catered towards me,” says O’Hara.

When considering entering the gaming industry, O’Hara says she sought out a role where she’d be able to utilize her skills as an artist.

However, as a woman in the gaming industry, O’Hara notes that she’s encountered several challenges.

“…It was difficult knowing where I fit [in]. There’s always a male bonding aspect to the game industry that was not accessible to me,” says O’Hara.

O’Hara notes that she had to think twice about even small decisions simply because she is a woman.

For example, when going to the Game Developers Conference (GDC) in San Francisco, she was the only woman in her group and was forced to deal with questions related to sleeping arrangements. She says that if she didn’t want to share a room with a male colleague, she’d have to pay twice as much.

Paloma Dawkins, a freelance cartoonist, is another woman making an impact within the Canadian gaming industry.

Dawkins has worked on titles like Oceanarium and The Story of the Elevator Operator who arrived at the Garden, which she developed alongside Fernando Serboncini, an engineering manager at Google.

Dawkins started her career drawing comic book cartoons, but when she started to shift to working digitally, her interests moved over to animation.

“I started considering how my artwork was now going to interact with this digital realm, and that’s kind of how I started thinking about video games [as] an option,” said Dawkins.

As a child, Dawkins played a lot of video games because she found that they were an escape from reality. Dawkins notes that she always looked for the best graphics but didn’t consider herself to be a gamer.

“I wish that I could be in a group of people where I can cry and not feel totally stupid.” — Dawkins.

“I kind of just [played] games because I liked them and went with the flow,” said Dawkins.

Dawkins says she has never worked under a larger video game developer because she always wanted to have her own creative freedom.

Additionally, she notes that it wasn’t hard for her to enter the gaming industry, but as she worked on different projects, she realized it’s difficult to find support within the industry as a woman.

“I feel like that’s just something taboo: to have a feeling. I wish that I could be in a group of people where I can cry and not feel totally stupid,” says Dawkins.

Dawkins says that creating a game is an emotional process, as developers put all their heart into the projects they work on, and so having that support system at work is important.

Multiple organizations have been popping up to create an inclusive and supportive work environment for women.

Dames Making Games (DMG) is a non-profit organization in Toronto that provides marginalized people interested in games with programs and events to help empower them. As part of the DMG organization, the Damage Labs Studio Startup program aims to help founders create new game studios across Canada.

Kaitlin Tremblay, a co-director at DMG Toronto and lead narrative designer at Capy, grew up playing games with her older brothers. As a child, she played a lot of video games and loved the cool stories they told.

“I didn’t know that video games could be a career opportunity,” said Tremblay. Her love for storytelling eventually led to her seeking a career in writing. With hopes of getting a job as a writer or editor, Tremblay finished her master’s degree in English. Thanks to a fortunate opportunity that arose out of the blue, Tremblay secured a position as a video game editor and writer for a friend’s video game review website.

Soon after, she landed a marketing job within an indie studio in Toronto. Finally, she was given an offer to create her own game through DMG,

Tremblay says that when she was starting out in the industry, she was fortunate enough to be in an environment catered to empowering women, queer and racialized people. However, she soon felt the systemic biases that existed within the industry.

“I’ve received a fair bit of harassment from bosses, and a lot of that being gender-motivated,” says Tremblay.

Over her years in the industry, she’s heard comments that she was “too emotional” to handle information simply because she is a woman. Slowly, she began to internalize these comments and doubt herself.

Ubisoft Toronto is a video game studio under the French publishing giant Ubisoft, which has multiple other locations spread out across Canada. In 2020, many claims of misconduct popped up through social media from women who worked at Ubisoft Toronto. A specific allegation that one of the studio’s co-founders had choked a female employee caught the attention of many. This was not the first allegation made against this particular co-founder — they later resigned.

A prominent issue brought to light was the environment created by studios, which enabled men to get away with such acts towards their female co-workers and for women to be silenced. Though this issue is still prevalent today, change is occurring within the industry as women and other minorities become more visible.

Pixelles is another organization made to support women within the gaming industry. This organization is a non-profit and offers aid to women aspiring to be part of the industry with free monthly workshops. Though it was made to empower women, anyone from any background, age or gender is welcomed.

“All of our programs and events have this amazing ripple effect where we see an impact, not in five years, but right now!” — Cohen-Palacios

Rebecca Cohen-Palacios, the co-director of Pixelles and Game & Colour — an initiative that aims to help people of colour in the gaming industry — says she wasn’t a big gamer growing up.

“I didn’t ascribe to any kind of childhood ‘gamer’ identity. To me, games were a regular thing that people enjoyed,” said Cohen-Palacios.

Before becoming a game developer, Cohen-Palacios designed and programmed user interfaces for websites, apps and digital experiences. When coming across the Difference Engine Initiative, a program where six women were given the opportunity to make their own game, she jumped at the chance. After this experience, she decided to take her skills in user interface to a career in game development.

Cohen-Palacios has specialized in user interface design, art and integration for a number of games including, Shape Up, Assassin’s Creed Syndicate, Assassin’s Creed Origins and The Elder Scrolls: Blades. Currently, she’s working on a secret project.

With all the work Cohen-Palacios has done within the gaming industry, she continues to empower women and people of colour through Pixelles.

Located in Montréal, Pixelles supports people who are interested in the gaming industry with workshops that are done remotely and are accessible worldwide. The organization allows people to network and create a safe community for everyone, no matter race, gender or age.

“All of our programs and events have this amazing ripple effect where we see an impact, not in five years, but right now! People who previously didn’t consider game development as a career path are now employed in studios of all sizes, elevating their peers and leading teams,” says Cohen-Palacios.

This is only a small group of women out of the many in the global gaming industry who have faced gender-based hardships. Dawkins says she believes that in order for the gaming industry to become more inclusive, more women need to be hired.

The 2021 State of the Game Industry report shows only 21 percent of the 3,000-plus game developers who responded identified as female in comparison to the 73 percent who are male.

And O’Hara agrees, saying, “I believe that a lot of changes come down to the company itself — specifically, who is being hired. Not only should we hire a specific number of women, but anybody we hire must have values of respecting diversity.”

“There’s still a lot of work ahead to be done, but our shared experiences help us feel less alone” — Cohen-Palacios.

Having women in leading positions where they can hire more women and other genders can create a more inclusive environment.

“We need women-run studios that are built on ethical frameworks that care about inclusivity in this industry,” says Tremblay.

With non-profits like DMG and Pixelles, women are connecting and creating a stand within the gaming industry today.

In addition to the initiatives that aim to support women game developers, but there are programs created to help pave a path to empower young girls in STEM and game development like Kids Code Jeunesse and Girls Make Games.

“There’s still a lot of work ahead to be done, but our shared experiences help us feel less alone, let us brainstorm solutions together and vital peer mentorship where we help each other succeed despite the obstacles,” says Cohen-Palacios.