It takes two to make a thing go fright 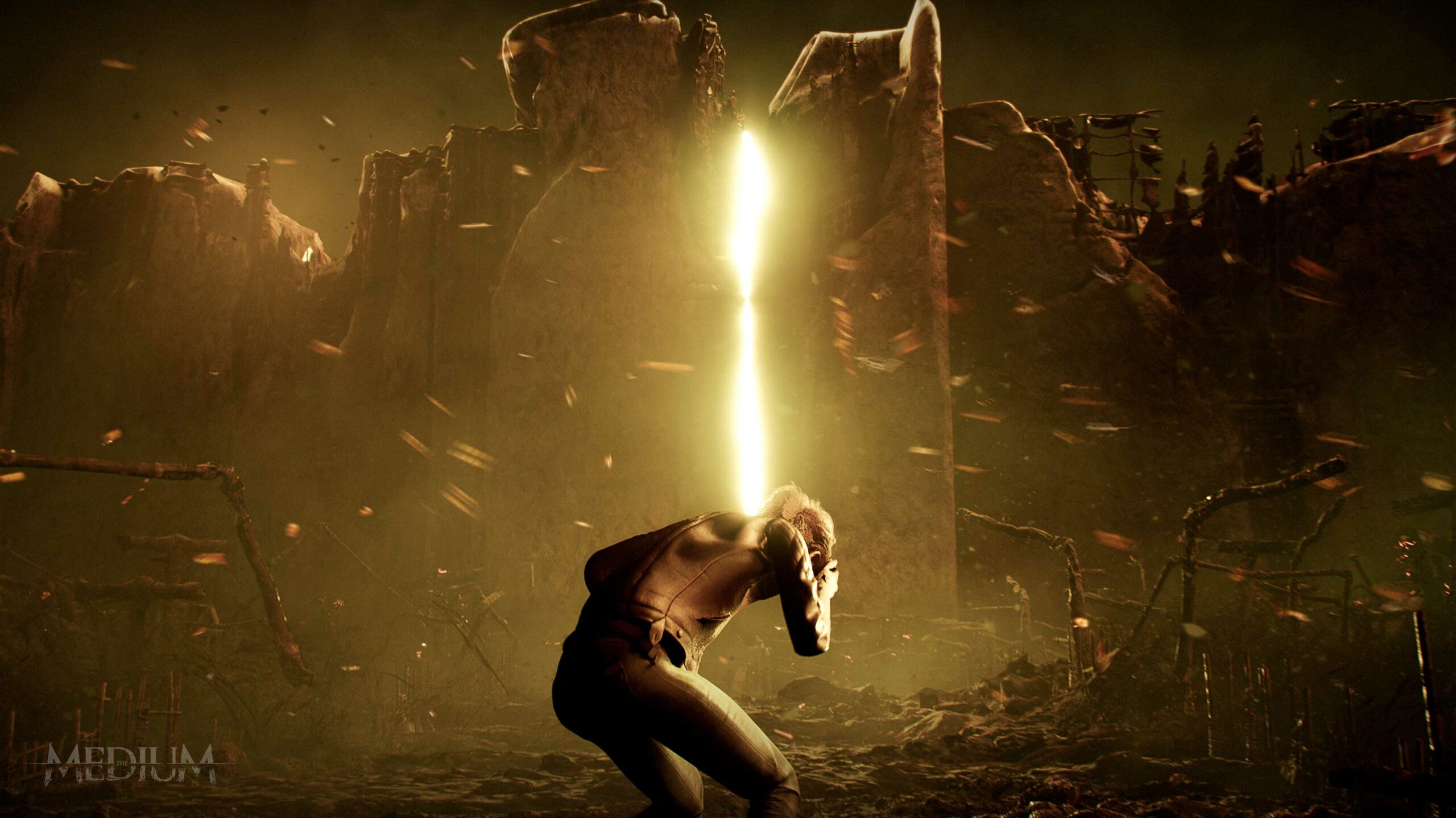 The Medium is an interesting Xbox exclusive.

Microsoft’s larger console gaming philosophy has been to continue supporting the last-gen Xbox One while offering enhanced versions of those same games on the Xbox Series X and S. However, The Medium is exclusive to the current-gen consoles and PC, without an Xbox One version.

According to developer Bloober Team, the technical limitations found in last-gen hardware were inhibiting its vision for a psychological horror game that takes place in two different realities simultaneously.

After my time with The Medium, I’m happy to say that the developer’s decision has paid off, allowing it to take full advantage of the beefier hardware to deliver a uniquely gripping horror experience.

The best of both worlds

In The Medium, you play as a medium named Marianne who is troubled by visions of a child’s murder. After receiving a mysterious phone call, she travels to an abandoned hotel resort for answers and comes across a larger supernatural threat.

Right from the start, The Medium deftly establishes Marianne — a troubled orphan who recently lost her adoptive father — as a sympathetic character who’s easy to root for. At the same time, you get to see her warmer side through an endearing friendship with a young spirit named ‘Sadness.’

Having these core hooks helps keep The Medium grounded throughout the 10-hour campaign, even when the plot becomes a tad bit convoluted as you unravel the backstories of the hotel’s former residents. That investment in Marianne proves even more important since you sometimes must play as two versions of her. This is where The Medium‘s “dual reality gameplay” comes into effect. As a medium, Marianne can control an astral version of herself in the spiritual world, and in certain instances, you’ll need to command both forms at once. 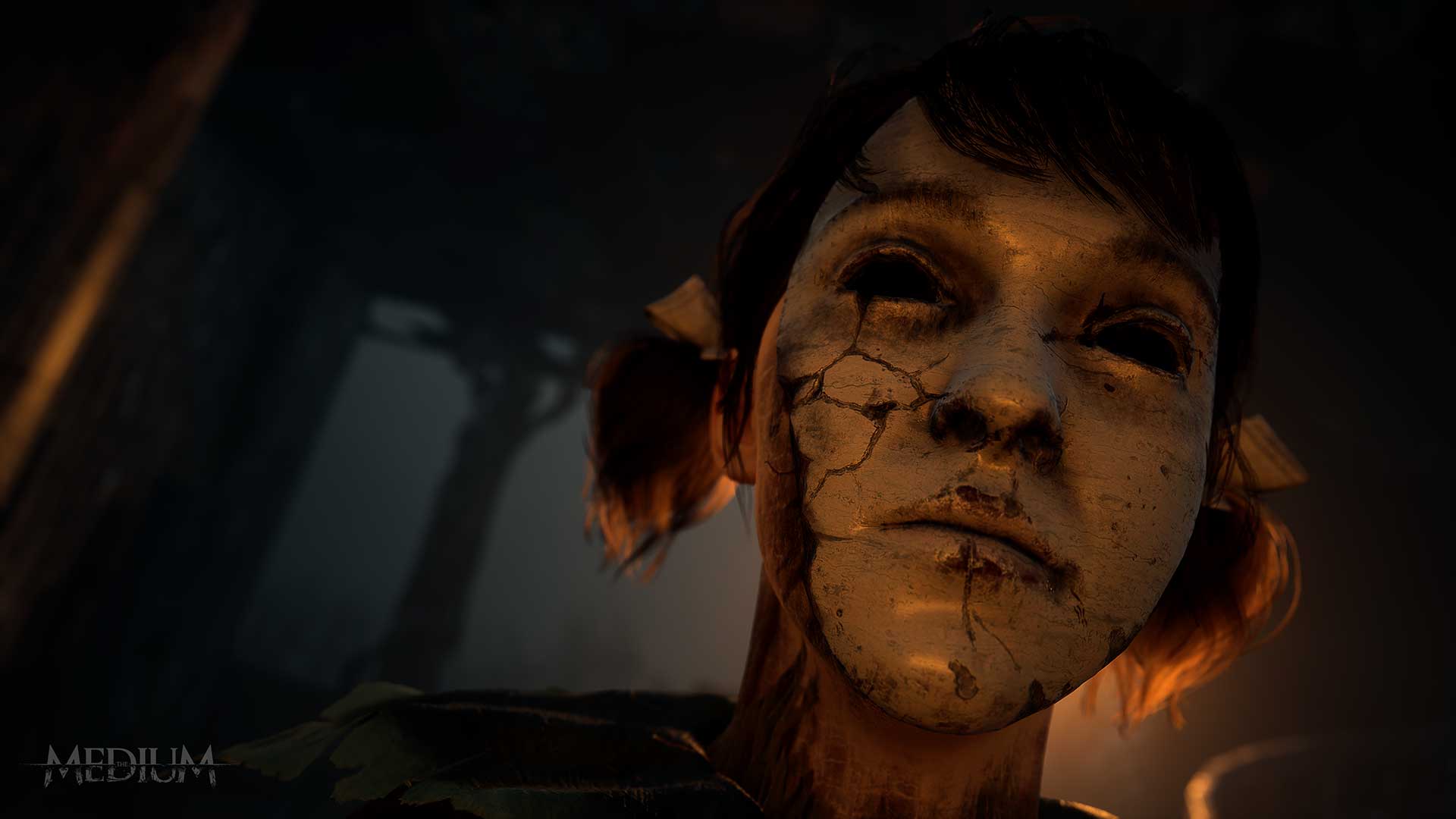 Overall, Bloober uses this conceit to outstanding effect. From an art direction perspective, it’s impressive to see two geographically similar but aesthetically different settings play out in front of you simultaneously. The darkened, dilapidated corridors of the abandoned hotel contrast nicely with the apocalyptic orange hues and corpse-filled floors of the spirit realm, especially in stunning 4K HDR on the Xbox Series X. Strong sound design — like the creaking of the floorboards and crack of lightning in the real world, and the moaning and slithering sounds of the spirit world — further adds to the chilling atmosphere.

All the while, you’ll control Marianne in third-person through fixed camera angles — a uniformly smart decision on Bloober’s part to evoke the claustrophobic feeling of classic horror games while ensuring players don’t feel overwhelmed when handling two characters at once. To that end, Bloober has even enlisted legendary Silent Hill composer Akira Yamaoka, who’s produced some haunting work for the spirit world to accompany Bloober’s own Arkadiusz Reikowski’s equally compelling score for the real world. 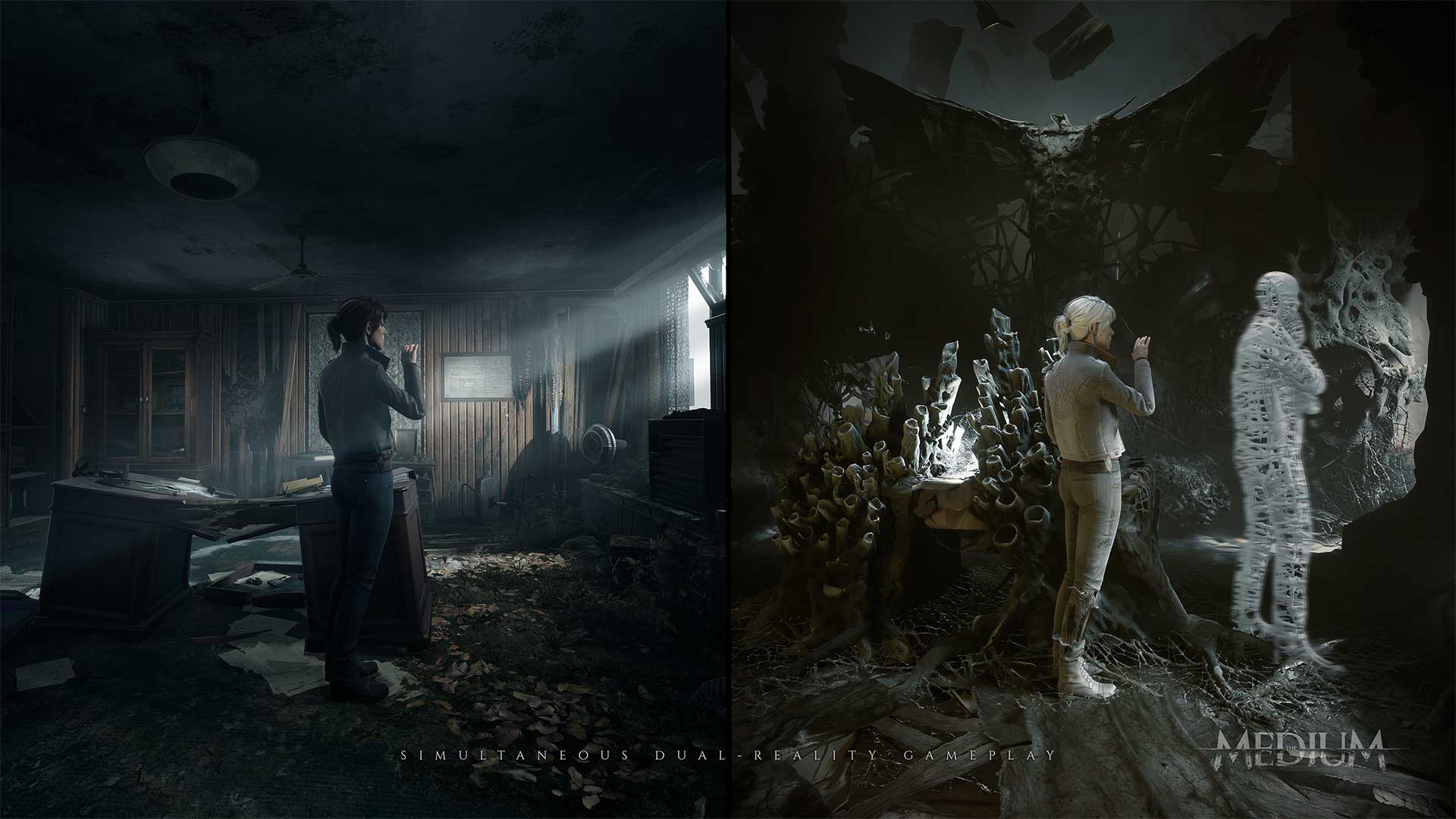 On top of all that, Bloober makes sure that much of what you do in one world informs the other. There’s a clever synergy at play between the two Mariannes, as they must work in tandem in order to progress. For example, ‘Spirit Marianne’ is able to harness energy from ‘spirit wells,’ which she can use to power switches for ‘Human Marianne’ to turn on in her world. There are also some fairly tense and trippy moments as real-world Marianne undergoes an “out of body experience,” shifting full control over to her spirit form to clear the path before she’s torn apart from the separation (which is visualized through an unnerving disintegration effect).

Even on a fundamental moment-to-moment gameplay level, there’s a satisfying element of surprise to the game knowing that Bloober can, at any time, instantly swap you between Mariannes or even force you to control both simultaneously.

Unfortunately, while these dual reality scenarios keep gameplay fresh, they suffer from a general lack of difficulty. That is to say, they’re not so much puzzles that need to be solved, and more so rudimentary obstacles that the Mariannes must clear for one another to progress. The dual Marianne sequences do get appreciably more complex and inventive towards the end of the game, particularly in a memorable late-game scene involving a dimensional-altering dollhouse, but it’s a shame they aren’t as consistently well-implemented earlier on. 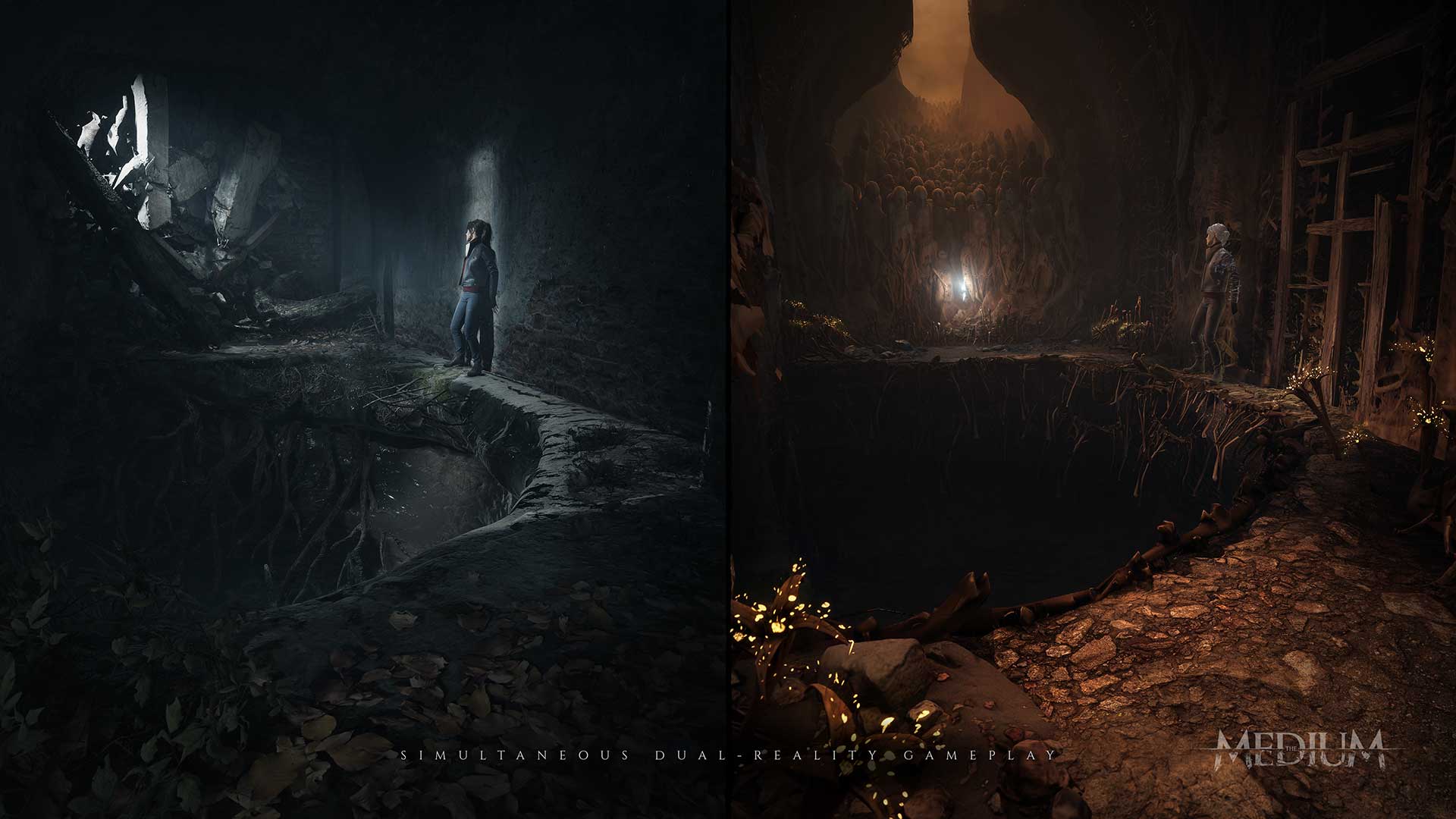 The Medium also does an exceptional job alternating between creating threats in both the real and spirit world to ensure you can never feel too safe wherever you are. The main way the game does this is through The Maw, a mysterious and terrifying entity that serves as the main antagonist The Medium. In many ways, The Maw is wonderfully reminiscent of the likes of Mr. X and Nemesis from the Resident Evil series — a frightening figure that relentlessly pursues you throughout the game and leaves you constantly guessing when it’ll appear. You’ll also often not even be able to properly see The Maw, requiring you to carefully look for pulses in the air and paying attention to a chillingly effective “hot-and-cold” series of vibrational cues on your controller.

Making The Maw even more unsettling is an incredible performance from Troy Baker, who is completely unrecognizable in the role. While the prolific actor has played many roles in his career (particularly, gruff tough guys like The Last of Us‘ Joel or Telltale’s Batman), his turn as The Maw is unlike anything you’ve ever heard him in, punctuated with guttural, anguished cries and scratchy, breathless whispers. 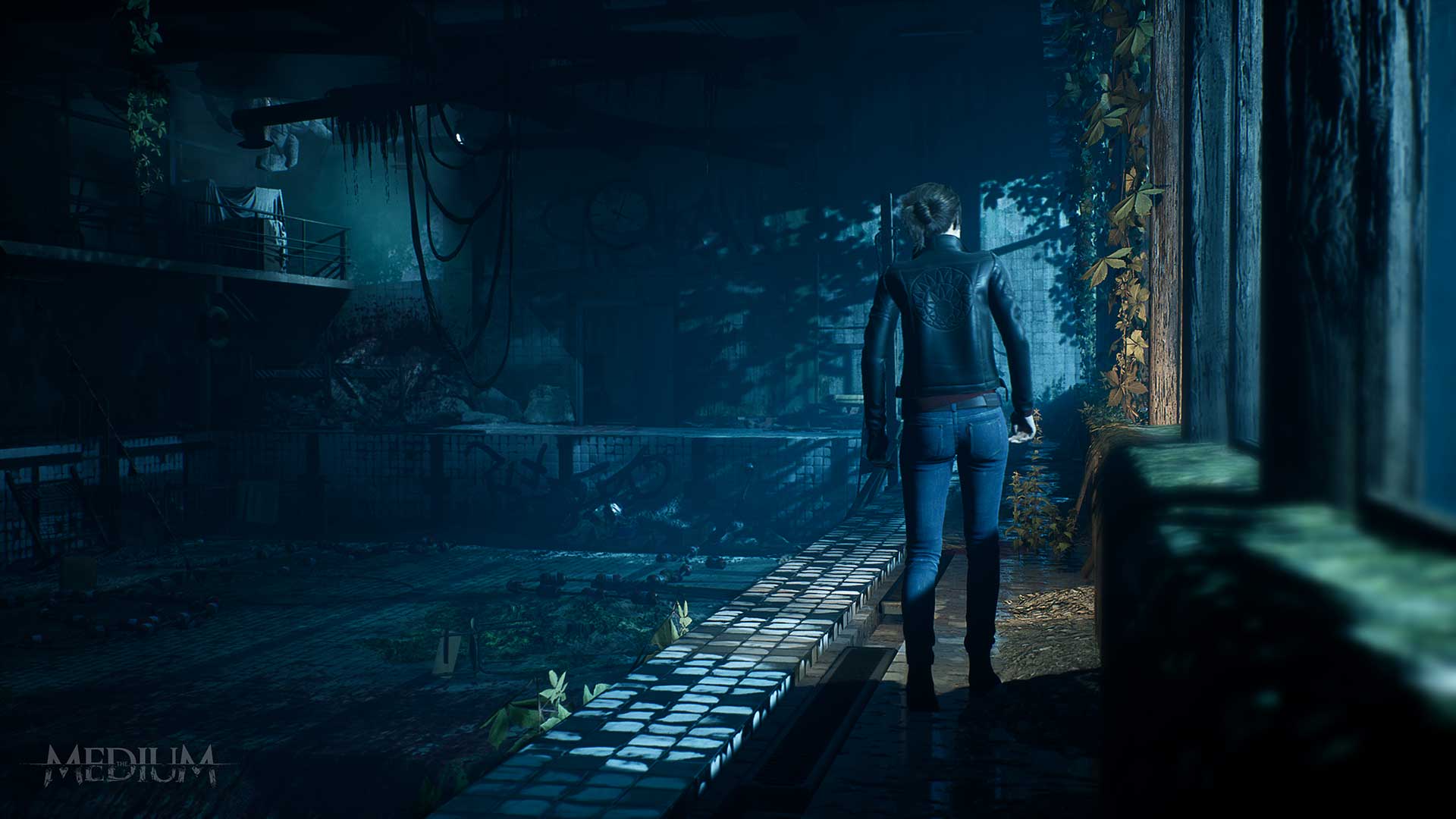 The only real issue with The Maw is that some of Marianne’s encounters with it leave much to be desired. On the whole, Marianne is a bit stiff to control, which is fine — preferred, even — as you slowly explore the dual environments. Conversely, this means that some scripted sequences where The Maw chases you can lead to a quick death when Marianne doesn’t quite pivot as quickly as you’d like.

Further, there are a few stealth-based encounters with The Maw that feel painfully dated, with generic rooms containing a few objects obviously laid out for you to crouch walk between when the beast looks away. By and large, these don’t happen too often, though, and are certainly not enough to ruin the palpable sense of dread instilled by the ever-present Maw.

The Medium is a great horror experience. Although some puzzles and stealth encounters could have used more work, these issues are easily overcome by the constant disquietness produced by the game’s brilliant parallel worlds, remarkable presentation and a truly unforgettable antagonist.

Put that all together, and Bloober’s created something of a modern horror classic.

The Medium launches on Xbox Series X/S and PC on January 28th. The game will also be available through Xbox Game Pass for Console and PC on day one.