Naughty Dog has taken great pains to make you truly feel like a survivor in a post-apocalyptic world, and the results are magnificent 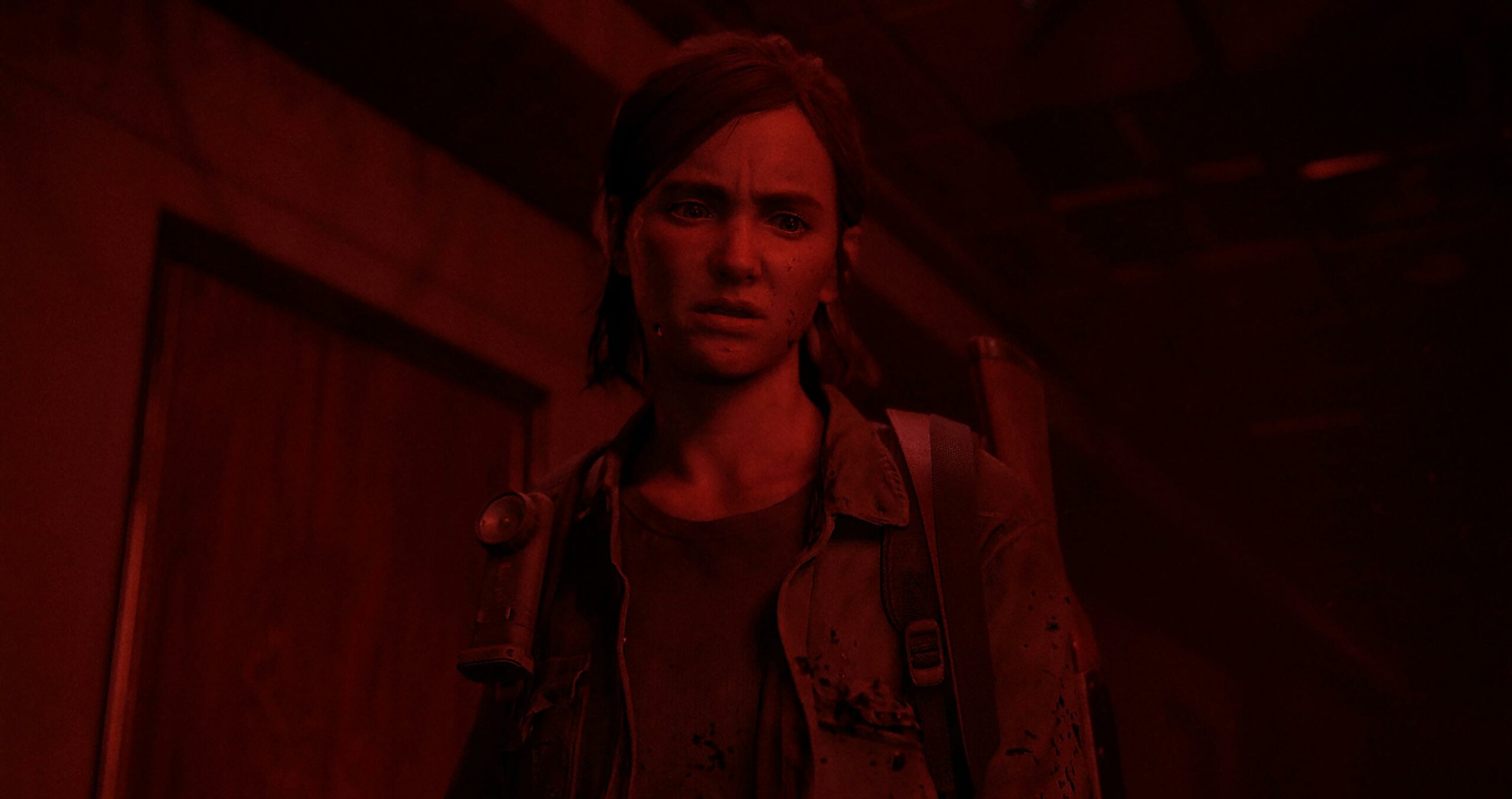 If someone asked what you like most about Naughty Dog games, you’d probably respond with “their characters” or “their stories.”

After all, the Sony-owned studio’s made a name for itself since the early PlayStation 3 era with smash hit games like the Uncharted series and The Last of Us, which have been celebrated for their top-notch storytelling, visuals, characterization and performances.

When playing Naughty Dog’s latest game, The Last of Us Part II, however, I actually found myself enjoying gameplay most of all. That’s not to say its narrative and characters are disappointing — far from that, in fact. The Last of Us Part II’s continuation of Joel and Ellie’s story is as emotionally resonant and thematically rich as you’d expect and filled with Naughty Dog’s signature twists and turns. (MobileSyrup‘s Patrick O’Rourke gets more into that in his in-depth look at the game.)

But a game has to be enjoyable to actually play, and thankfully, the The Last of Us Part II does a brilliant job doing just that by marrying its harrowing world and complex characters with an outstanding core gameplay loop.

In The Last of Us Part II, you play as returning character Ellie, who’s now five years older and on a journey to kill the people who have wronged her (for story reasons I won’t spoil here). With so many action games focused on tough, experienced adult males, the decision to cast you as a much younger and more vulnerable — yet nonetheless still capable — heroine is refreshing, to say the least. To that end, Naughty Dog was wise to take the differences between her and Joel — and, by extension, his fellow grizzled male badasses — and have them reflect on the gameplay, making The Last of Us Part II feel much more dynamic and tense than most action games.

First and foremost, Ellie is younger and smaller than Joel, which affords her much more maneuverability. This mainly comes in the form of a trio of new gameplay mechanics: the ability to go prone, squeeze through tight spaces and jump. I suspect that many players will take these new mobility options for granted, but I appreciate just how much attention they were given from Naughty Dog. That’s because level design had to be completely reimagined to accommodate all of the ways through which Ellie can interact with the world.

To start, these mechanics greatly inform The Last of Us Part II‘s exploration, worldbuilding and character progression. Since the game largely takes place in a post-apocalyptic Seattle, you can take the time to look around and learn more about society before, during and after its collapse. Through its bigger locales, the game can have areas with different sections — a colourful music store here, a blood-soaked camp there — that feel connected, lived in and full of interesting sidestories. To get around these areas, you’ll need to climb, squeeze, jump and crawl through the dilapidated city. At times, you’ll even get a horse or boat. 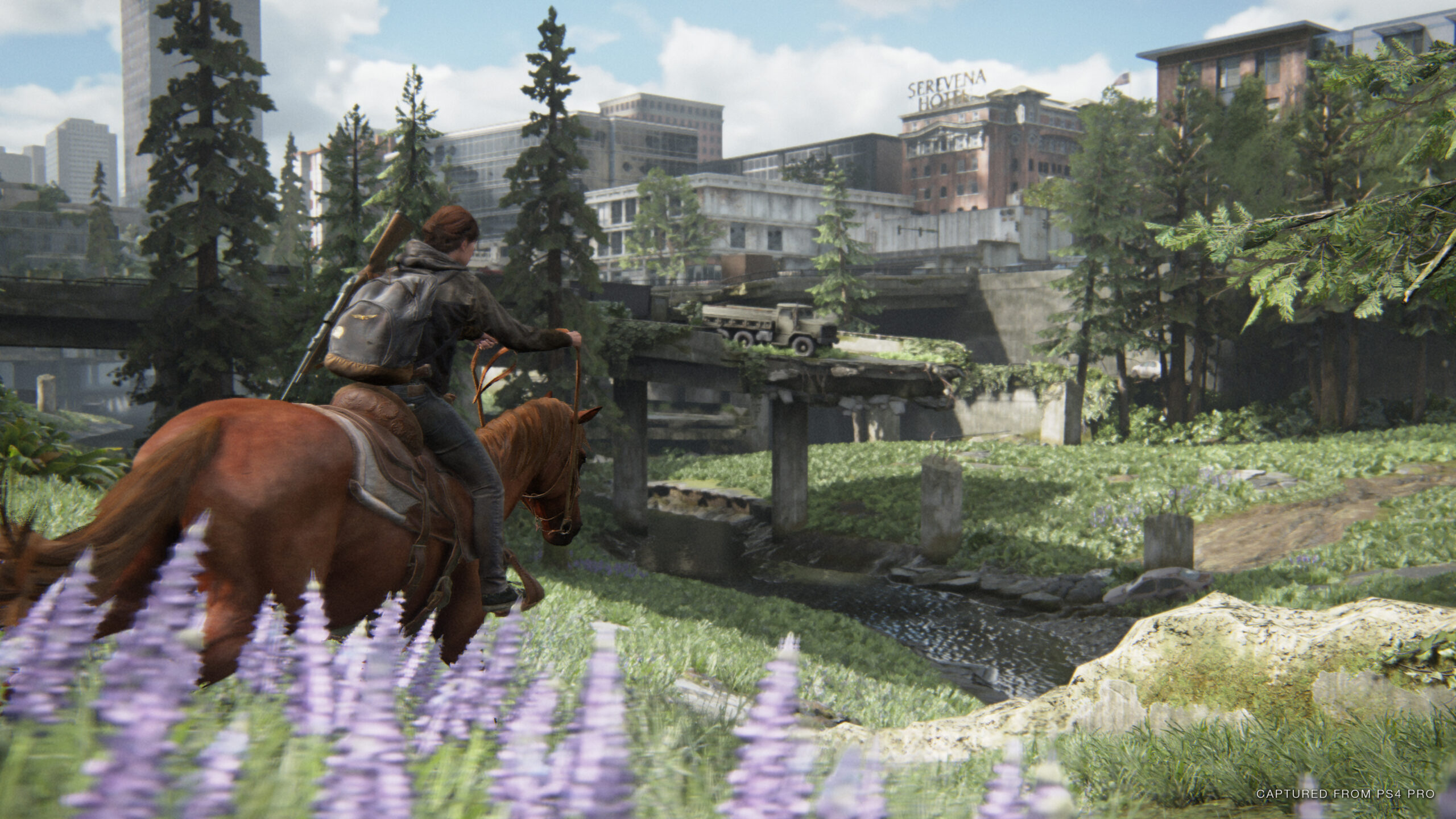 Along the way, you’ll find notes with the corpses of everyday people, like a wounded husband holed up on one side of town, and a few streets away, the letter from the wife and child he ultimately failed to reunite with. Additionally, letters can sometimes open up meaningful gameplay opportunities, such as pointing you to nearby areas containing various goodies that you’ll need to carefully scan the environment to find a way to reach them.

Not only does this all serve to create a meaningful connection between you and the world of The Last of Us Part II, but it also constantly rewards you for your exploration with new crafting materials, parts to mod weapons and pills to upgrade Ellie’s abilities. Progression is markedly deeper here than it was in the first game thanks to a much wider variety of abilities focused on melee, stealth, crafting and more. You can even find rare training manuals that open up new skill trees with even more skills for Ellie to learn — my favourite being a silencer you can craft for your sidearm.

Of course, the world has many threats in store for you, and in that regard, Ellie’s nimbleness vastly opens up all kinds of emergent combat opportunities. In the first game, you could take out enemies quietly, but once you were spotted, any possibility for stealth was thrown out the window. That’s not the case in The Last of Us Part II, as Ellie can use her new abilities to evade and hide from enemies, even after being detected. This is especially true with tall grass in which Ellie can go prone to stay out of sight or gain a different vantage point to assess your surroundings and shoot at enemies from. 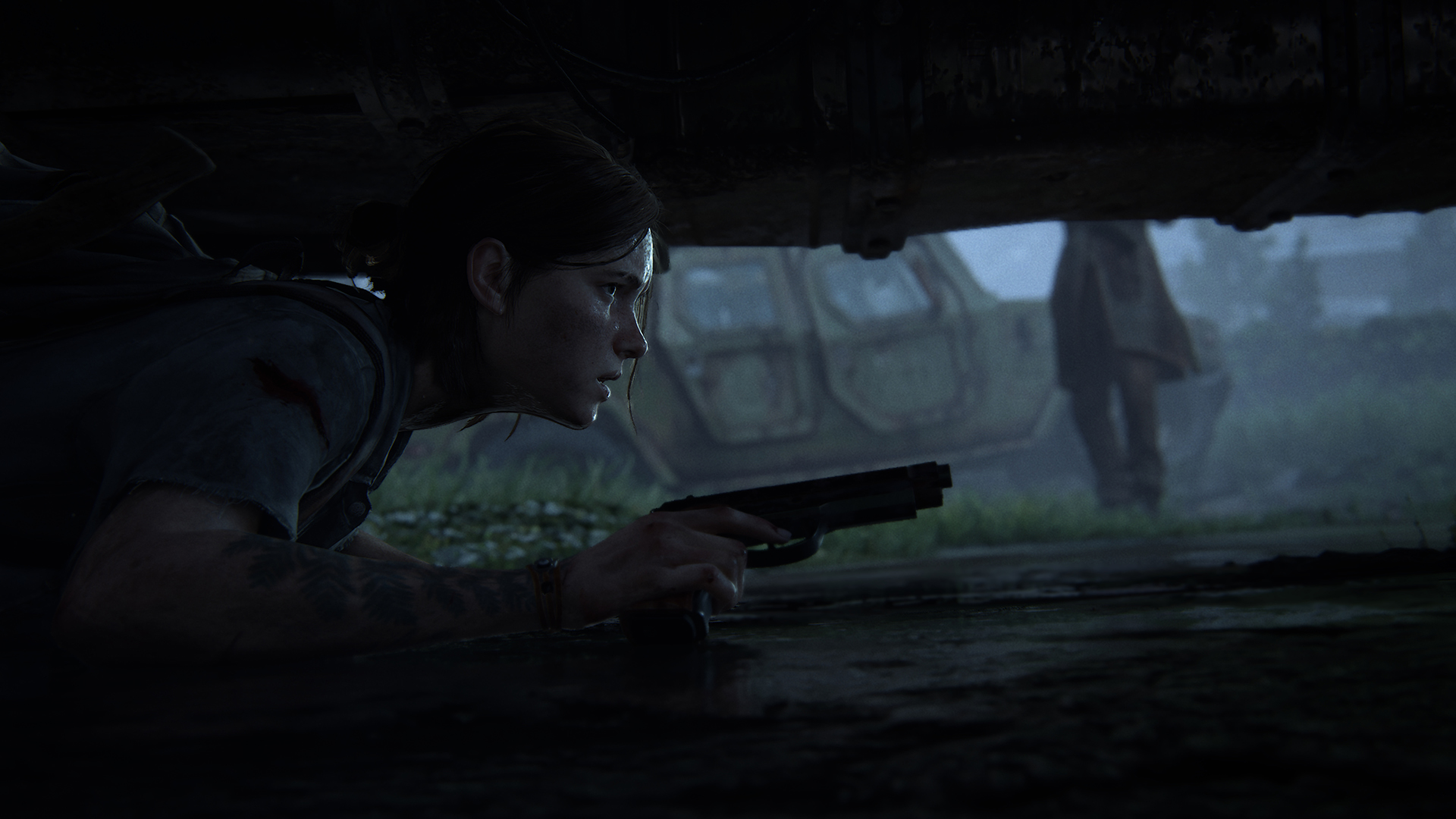 However, even if you’re seen, you can always make a dash for the other side of the map to dive into grass, scurry underneath low-hanging objects or just quickly slip through a gap in a nearby wall. What’s more, levels are often multi-floored, allowing you to adapt to incoming enemies and strategically go up and down to escape — or pursue — accordingly. In fact, after clearing out an area and going back through it to scavenge for materials, I would often discover ladders, doorways, patches of grass, crawl spaces and even swimmable bodies of water — all of which I could have used to traverse the map and approach enemies in a completely different way. Some fights can even be avoided entirely this way.

On the flip side, Ellie isn’t your typical badass action hero, so she carries herself in a much more realistic, and, therefore, immersive way that helps you properly feel her struggle to survive. When Ellie sprints, it’s frantic and filled with panting and frightened reactions to incoming fire that are all convincingly brought to life through stellar animations and phenomenal work from actress Ashley Johnson. Get hit with an arrow and Ellie will have to slowly remove it to prevent bleeding damage, wincing and crying out in pain as the arrowhead comes out. Even in melee combat, which now includes a dodge mechanic, Ellie avoids attacks by rather desperately flinging herself out of the way of punches and melee weapons. These finer details, coupled with the aggressive and smart AI, are extremely immersive and kept me constantly on the edge of my seat.

These nerve-wracking scenes are only strengthened by The Last of Us Part II‘s litany of new enemy types. The most prominent of these is the Washington Liberation Front (WLF), a militia which mixes up heavier artillery, efficient callouts of your actions and even dogs that can sniff you out. The dogs, in particular, are a welcome challenge, as they prevent you from resting in one spot for too long. 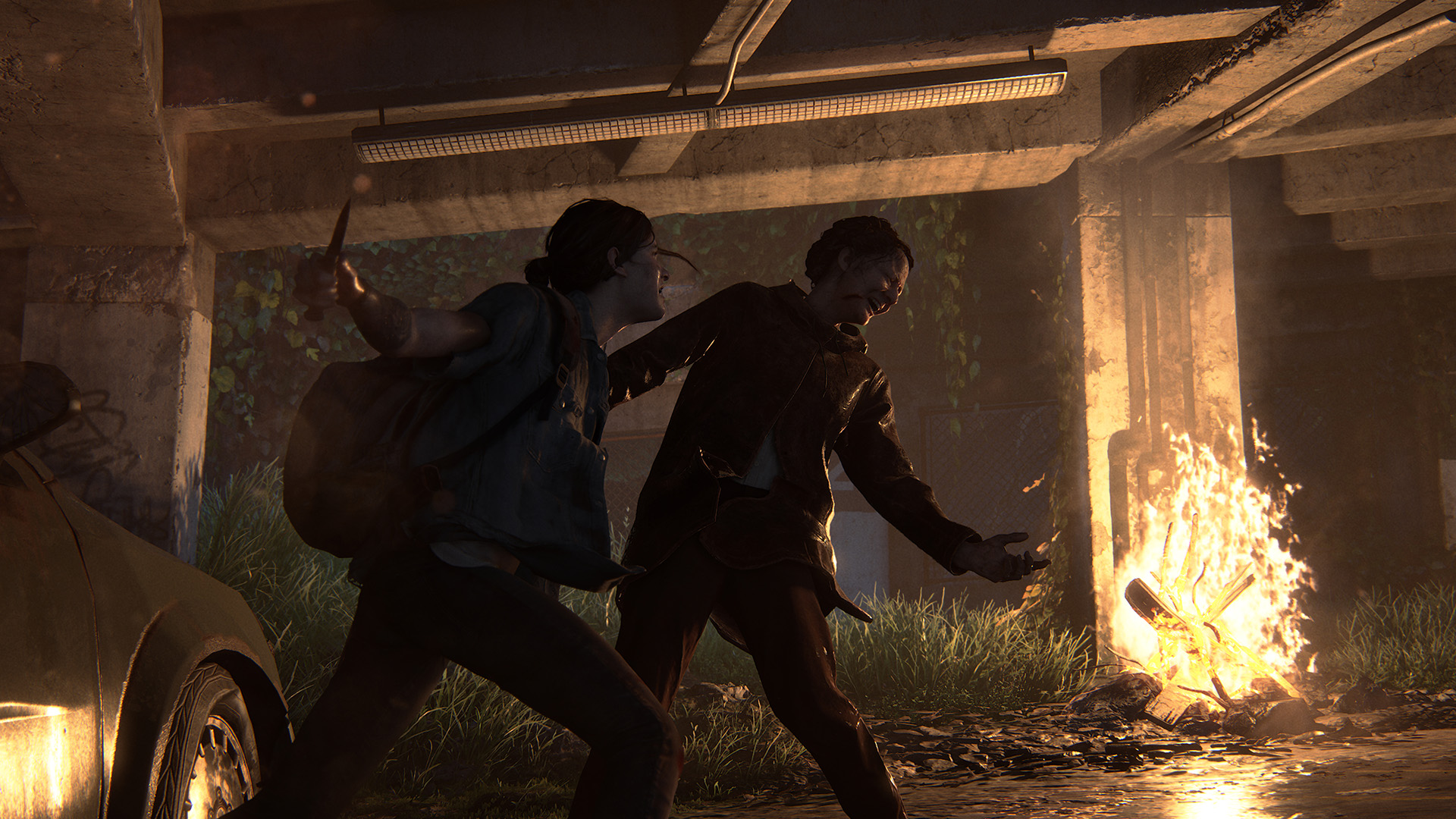 The Seraphites, on the other hand, are an old-school religious cult that relies more on guerrilla warfare, which includes bows, sneaking around in the same tall bushes you once thought were safe and communication via unintelligible whistles that leave you trying to guess enemy tactics. By alternating between these factions, as well as new and returning types of terrifying infected creatures and the aforementioned multi-faceted levels, The Last of Us Part II ensures that no combat encounter ever feels the same.

Most importantly, Naughty Dog leverages the interactivity of the medium to further explore The Last of Us Part II‘s weighty subject matter. While it’s undeniably satisfying to dispatch a group of enemies, The Last of Us Part II still wants to you to reflect on your actions. Take a few moments to observe enemies quietly and you’ll hear them talk a bit about themselves, humanizing people who in most games would simply be generic grunts.

What’s more, Naughty Dog has made the dastardly clever decision to give each enemy a name. What this means is that you’ll regularly hear enemies cry out for one another in anguish when you kill them. Surprisingly, this even applies to the Seraphites. I initially looked at them as nothing more than savages, but the game kept reminding me through these small character interactions they, too, were human. That’s to say nothing of the enemy dogs, who left me with a twinge of guilt every time they yelped as I put them down. In later-game segments, there are also slower, more scripted moments which further challenge you to examine the cycle of violence you’re actively participating in. 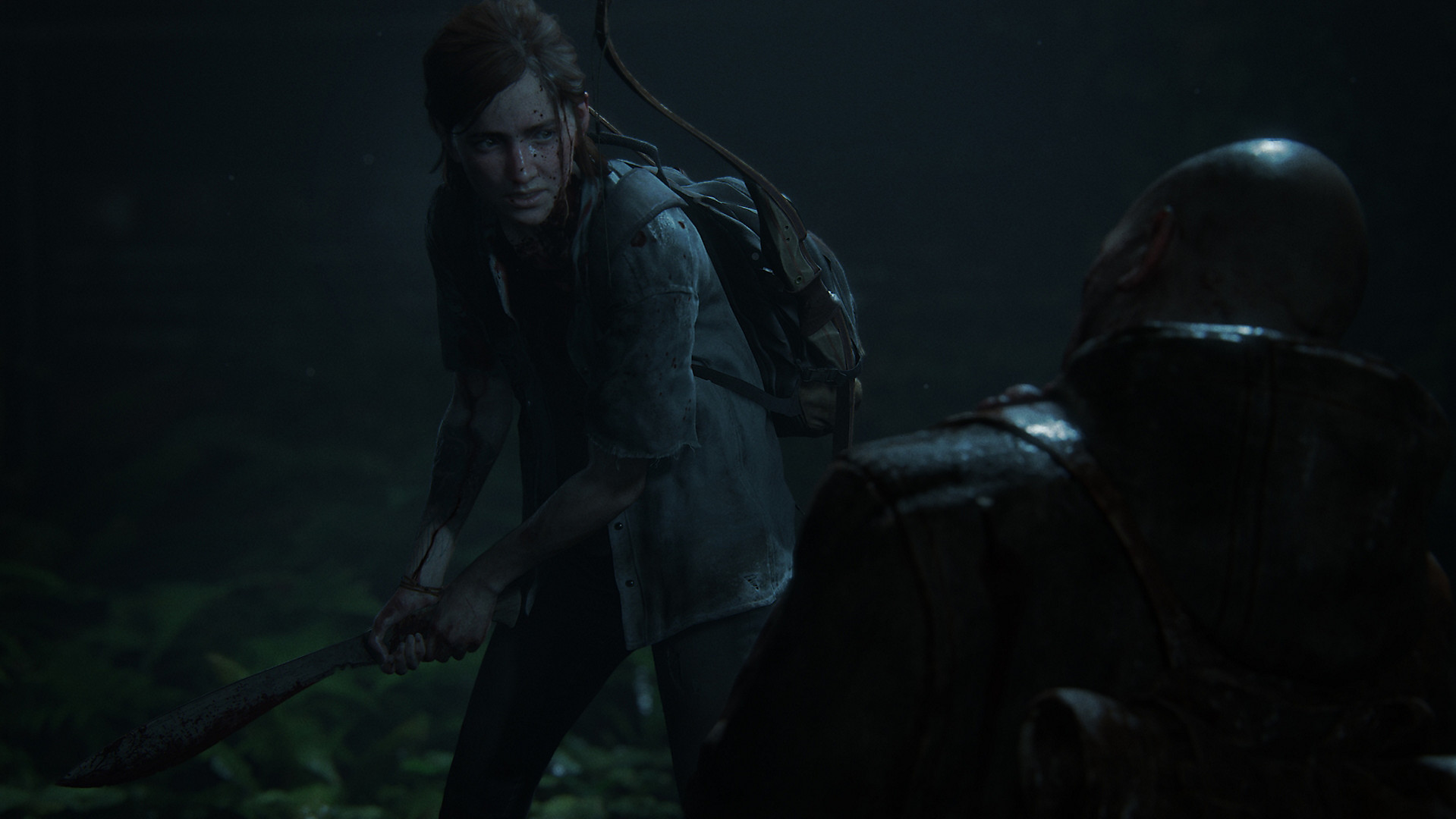 A narrative-driven game is most successful when it uses its mechanics to enhance the storytelling and allow you to fully inhabit the main character, imperfections and all. With The Last of Us Part II, Naughty Dog has expertly managed to weave its heavy subject matter into the gameplay, putting you in Ellie’s shoes to see and letting you experience both her moments, be they full of rage or racked with guilt.

Ellie is a capable survivor, but that doesn’t mean she gets by easily, and The Last of Us Part II‘s moment-to-moment gameplay conveys her hardships in captivating ways. The Last of Us Part II might mark the end of the PlayStation 4 era, but it’s also once again set the bar for storytelling through gameplay, and I hope that other developers will draw from this game in the years to come.

The Last of Us Part II will launch exclusively on the PlayStation 4 on June 19th.

Note: The Last of Us Part II features more than 60 settings to help those with visual, hearing and/or motor impairments enjoy the game. You can read more on these impressive accessibility options on the PlayStation Blog.