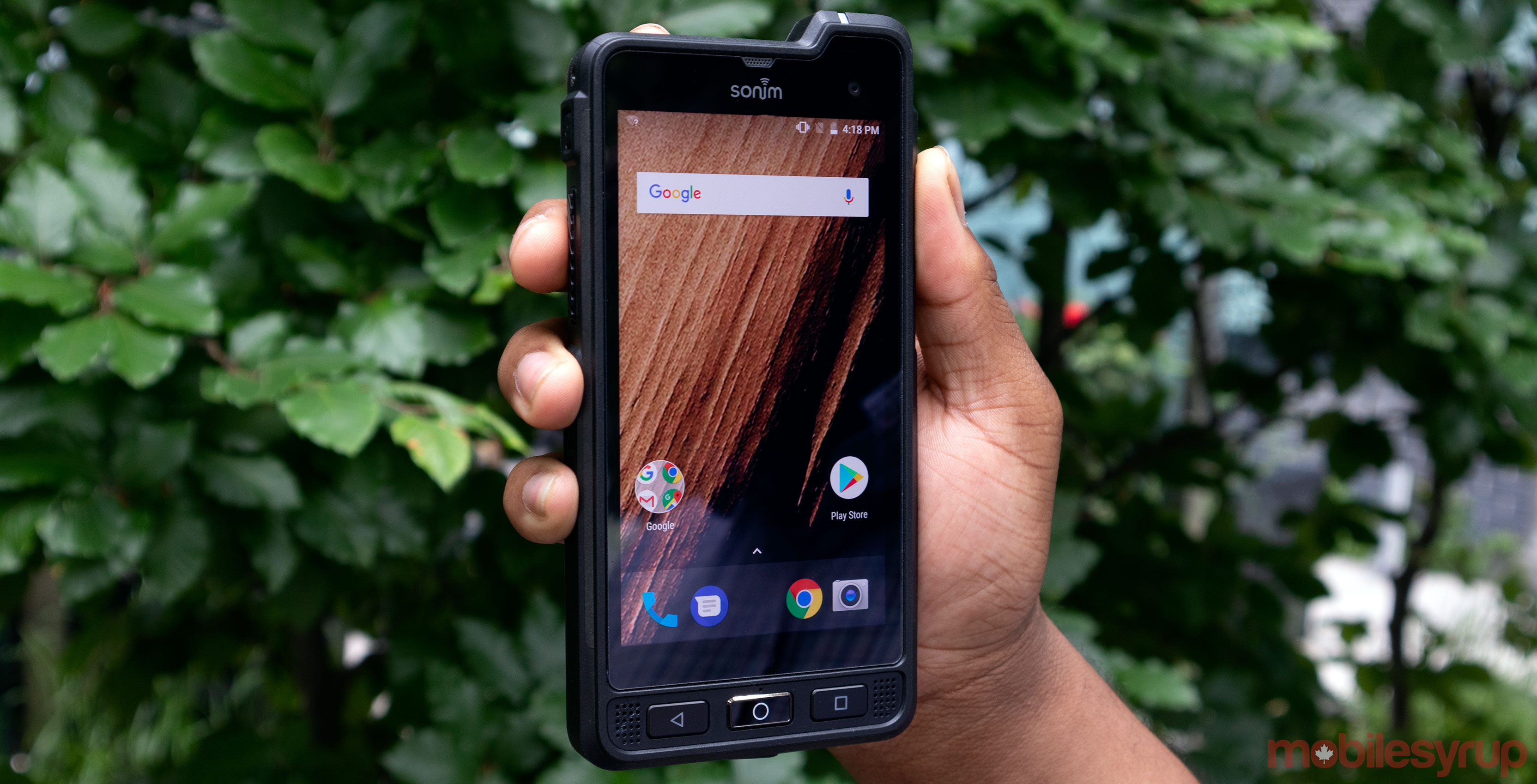 Sonim is an American company that specializes in rugged mobile phones.

To be specific, the California-based company sells both smartphones and feature phones.

Recently, I wrote an article asking readers which smartphone brand they’d like to officially come to Canada. In the story, I mentioned I didn’t know much about Sonim smartphones. Since then, the company reached out to introduce me to the XP8.

Meet the Sonim XP8, a smartphone that the company first launched in 2018. It’s the successor to the XP7, as well as Sonim’s latest rugged smartphone.

While MobileSyrup doesn’t typically review rugged smartphones like the Sonim XP8, which surprisingly still runs Android Nougat, we’re making an exception in this case. In a way, the XP8 isn’t trying to be like the other 2018 or 2019 smartphones. The real purpose of this rugged handset is that it’s safe to drop.

And honestly, it’s so satisfying to drop a phone, especially considering how easy they are to break nowadays. 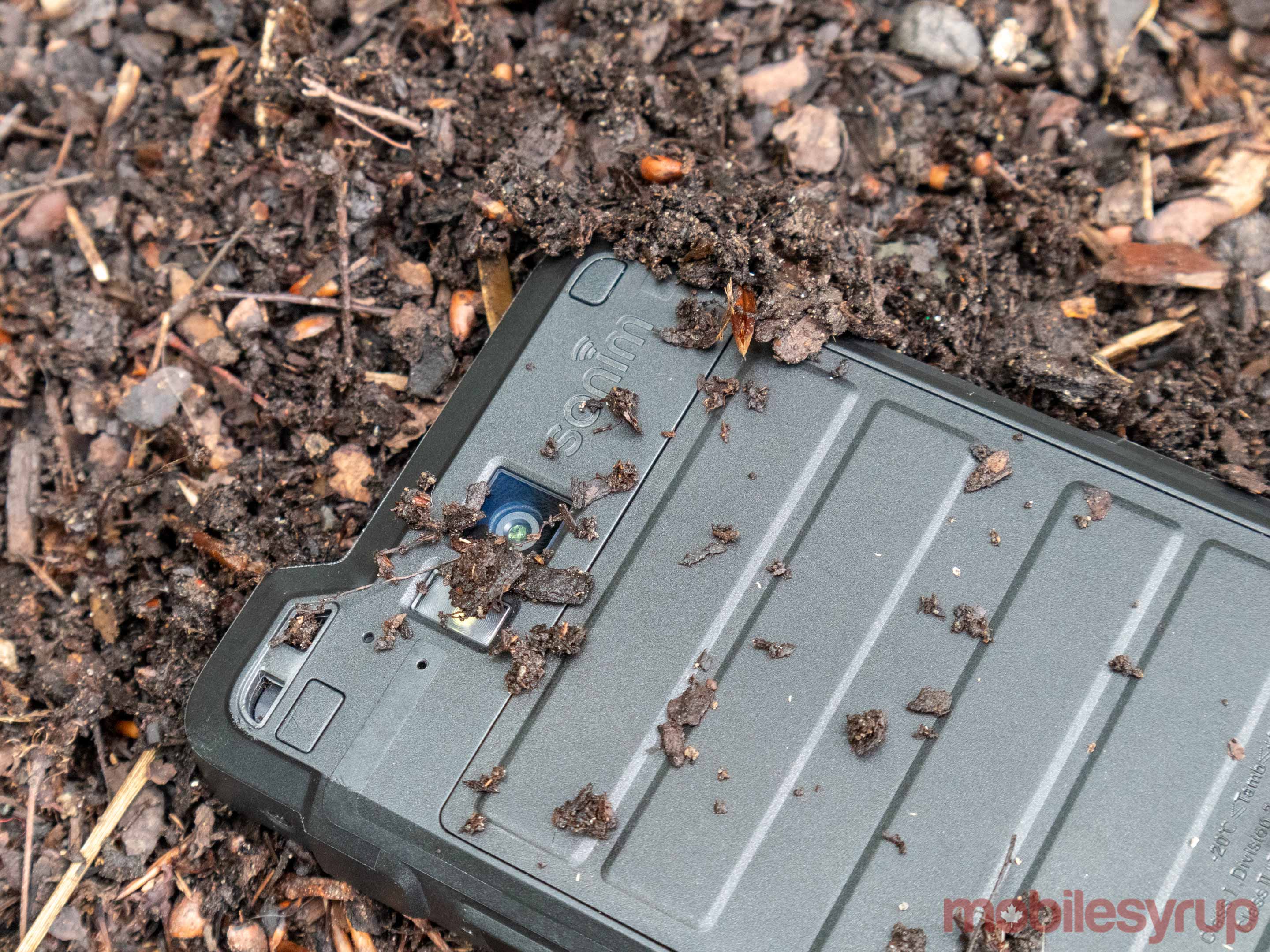 The Sonim XP8 features a 5-inch IPS LCD display with a 1080 x 1920 pixel resolution and the 16:9 aspect ratio of yesteryear. Additionally, the device includes a Snapdragon 630 processor, 64GB of expandable storage, 4GB of RAM and sports a 12-megapixel rear shooter/8-megapixel selfie camera. And as I previously mentioned, it also sports Android 7.0 Nougat.

Last but not least, the XP8 also includes a removable — yes, you can actually pop it out of the smartphone — 4,900mAh battery.

Other than the sizable battery, it’s obvious the specs featured in Sonim’s latest device are not that impressive when compared to typical modern smartphones. However, like a lot of more handsets these days, the XP8 is about far more than just its specs.

Sonim’s flagship smartphone is glove-friendly, can survive drops up to 1.98m (6.5 ft) onto concrete from any angle, and is capable of surviving temperatures ranging from negative 20 degrees Celsius to 55 Celsius, which is perfect for Southern Ontario winters. Additionally, the phone is resistant to chemicals, can withstand a metric ton of pressure, shocks of 30G, vibrations from 5Hz to 500Hz and can survive 1,98m (6.5ft) underwater for 30 minutes in fresh and saltwater, as well as even a high-temperature pressure wash.

What we put it through 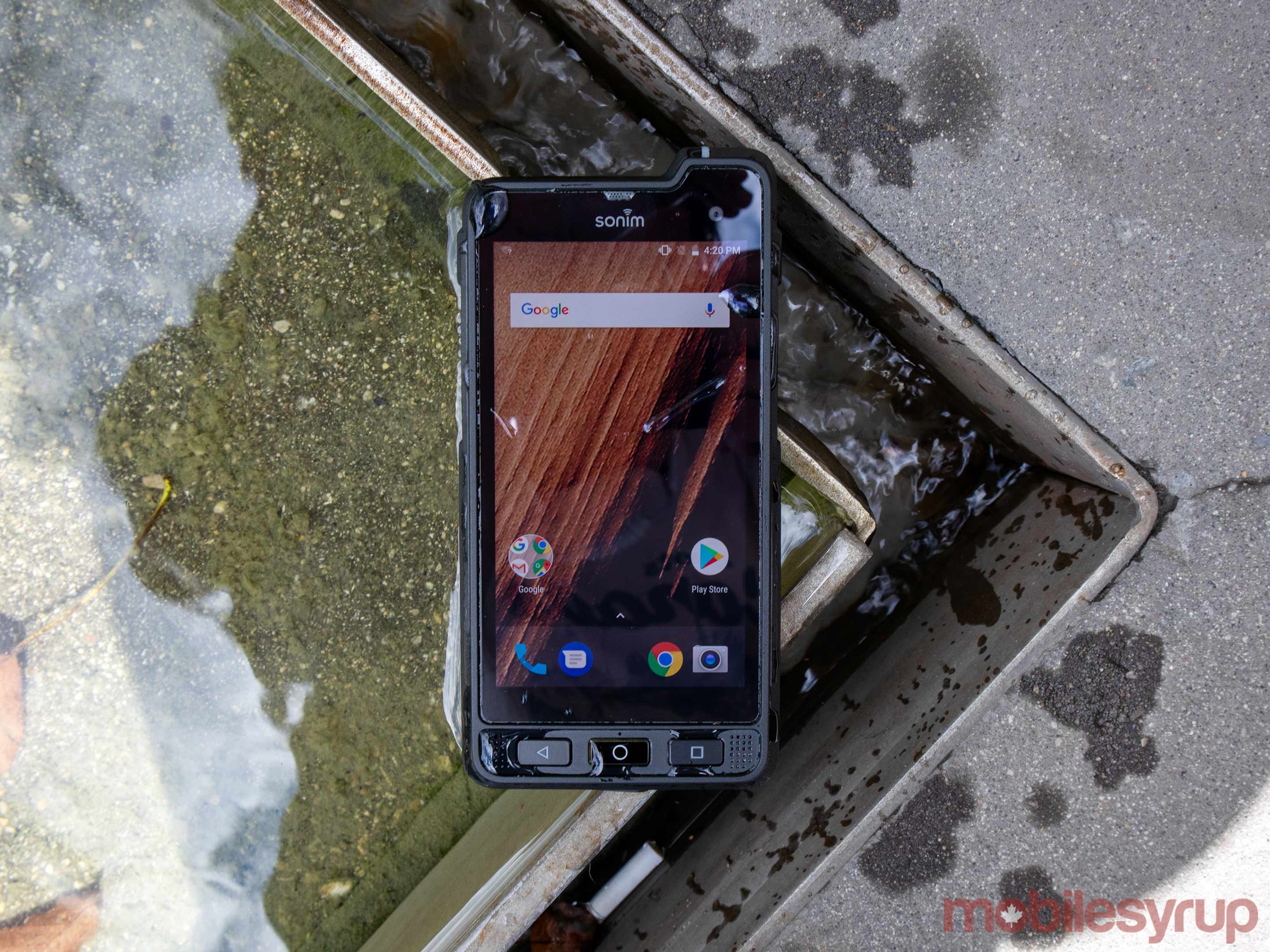 We put the Sonim XP8 through a lot, with the only exception being that we didn’t actually drive over it. That said, did jump on the handset a few times, and it’s still operational. We also slid it underneath the wheel of the vehicle, while it was parked. We tried playing hacky sack with the device as well, and unfortunately, due to its weight, my foot got more injured than the handset. We dropped the phone from higher than 6ft (but lower than 6.5ft) onto concrete numerous times, and it was perfectly fine.

We even skipped it across a small pond, and while it doesn’t glide across the water as well as a flat rock, it still skimmed the surface reasonably well. Furthermore, since we had multiple failed attempts at skipping the phone across the water, we also ended up testing its survivability underwater. With its ports covered, the device experienced no issues. After all of this intentional abuse, the XP8 walked away with only a few scuffs. 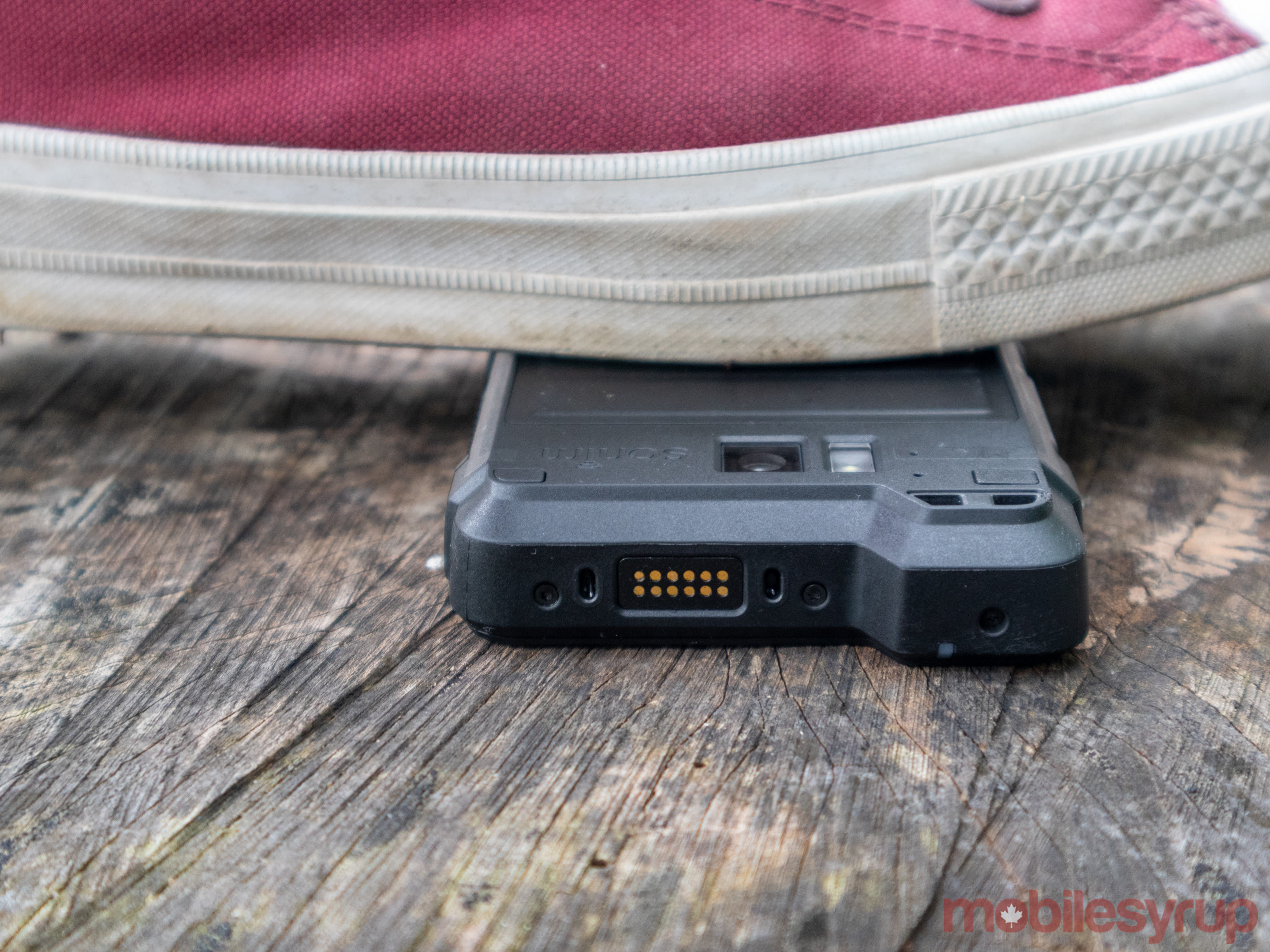 As a phone reviewer, I’ve cracked multiple devices, sometimes on purpose, but mostly by accident. With the Sonim XP8, I feel like I can be unreasonably rough with the device.

As Superman once said, “I feel like I live in a world made of cardboard, always taking constant care not to break something, to break someone. Never allowing myself to lose control even for a moment, or someone could die. But you can take it, can’t you…?” This is exactly how I felt with the XP8.

Finally, a phone that can truly handle me. 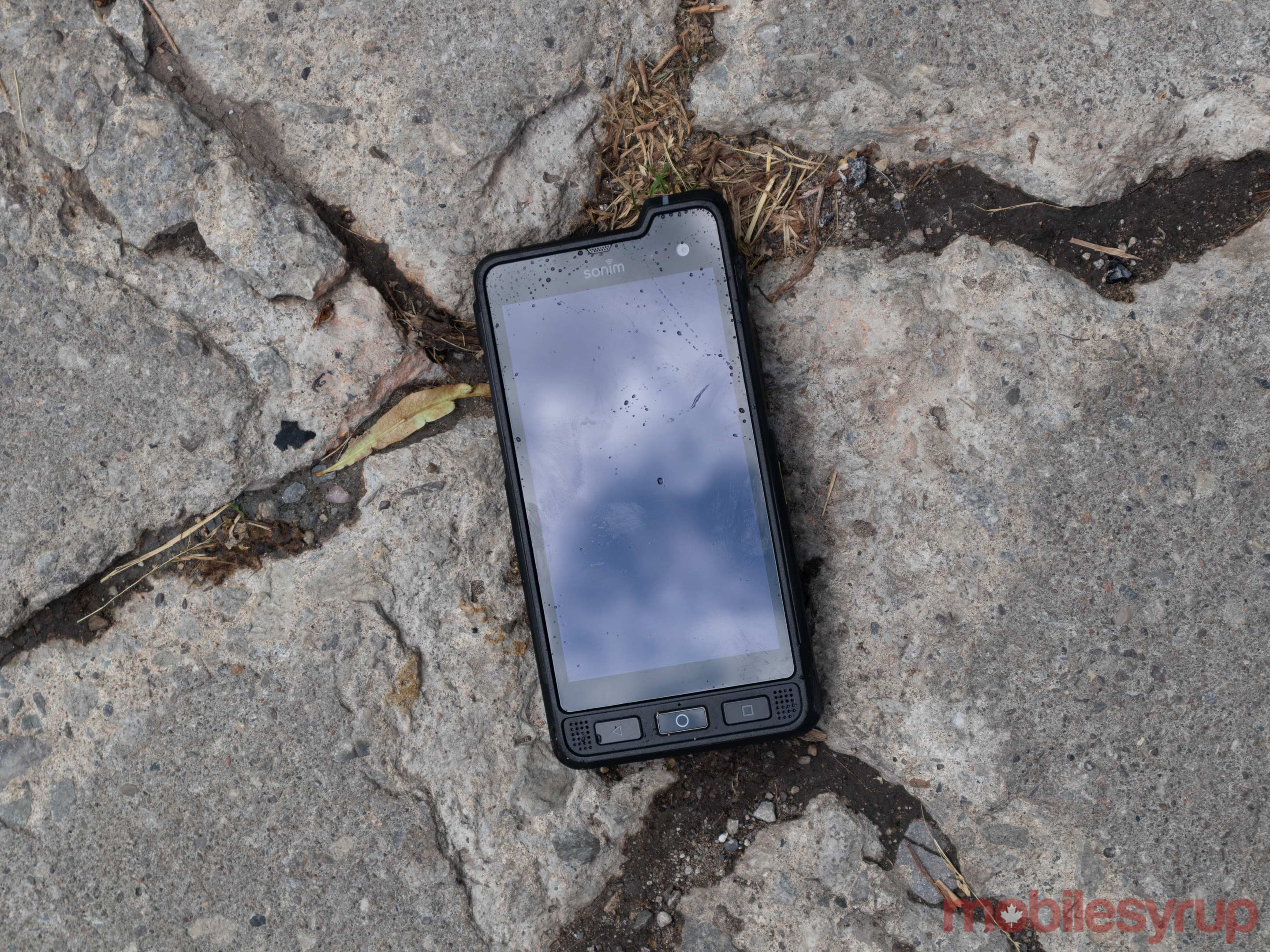 First and foremost the Sonim XP8 isn’t for everyone. It goes without saying that someone who wants a flagship handset with the latest features such as an in-display fingerprint scanner, a depth-sensing camera and a modern bezel-less design shouldn’t even consider a smartphone like this.

Nevertheless, the Sonim XP8 includes a fingerprint scanner, the ability to reprogram its extra buttons and front-facing stereo speakers, something I appreciate as many smartphones include downwards facing speakers that are easy to block with your hands.

The phone’s camera isn’t good and while it claims to offer high dynamic range images, the colours don’t seem very vibrant. This is noticeable, especially when taking pictures of the sky. Moreover, the images are soft and overexposed. Selfie pictures were also lacking in detail and featured quite a bit of noise and lacked detail. If you’re planning to take a lot of pictures, the XP8 definitely isn’t the phone for you.

During my time with the XP8, I struggled to kill the device’s battery and often lost track of when I last charged it. The 4,900mAh battery featured in this handset is undeniably impressive. 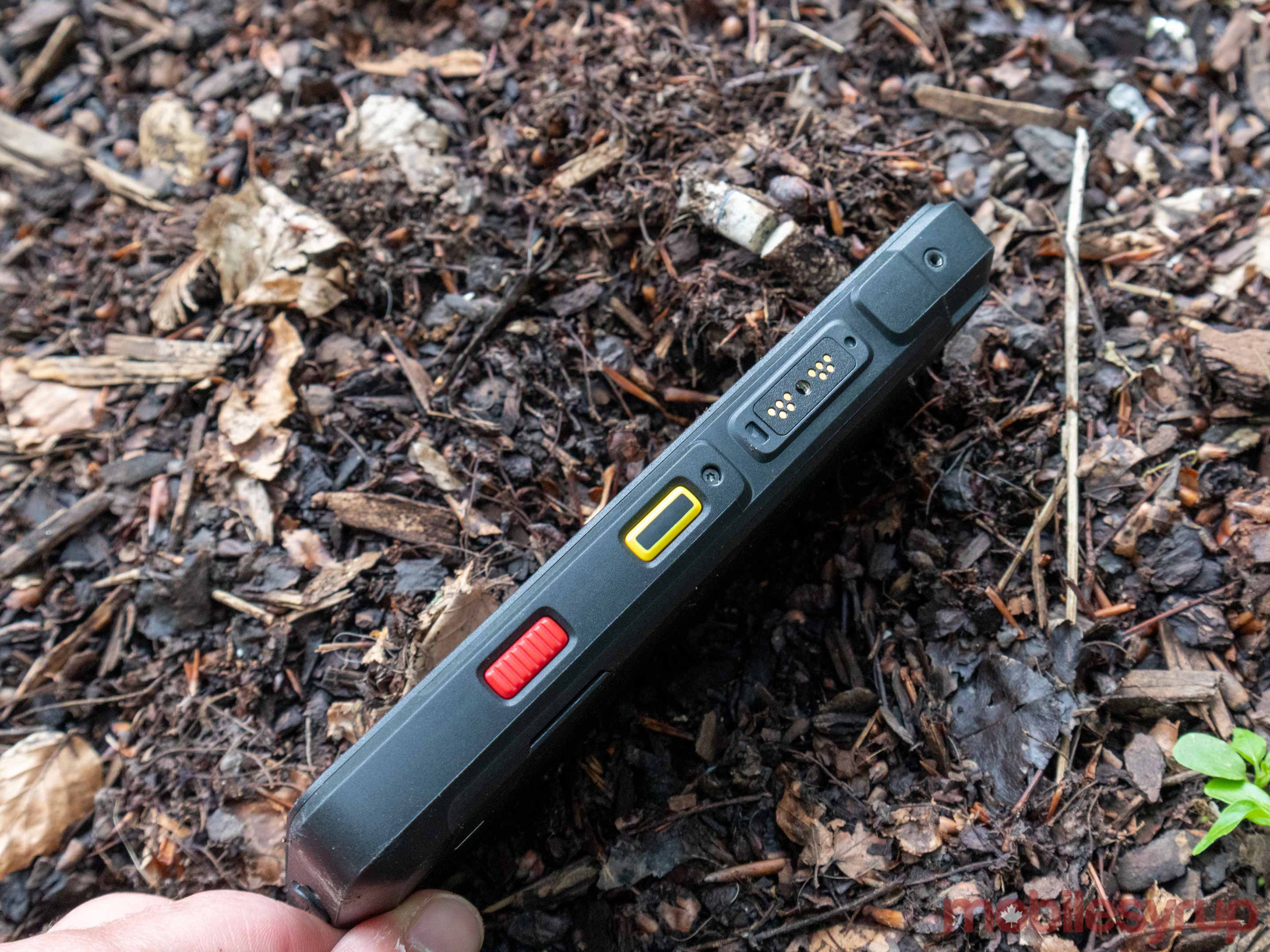 The Sonim XP8 isn’t the device for me. While I may be a klutz and often drop my smartphone, I’d still prefer a device with more modern bells and whistles.

We put the Sonim XP8 through the wringer that even some rugged phones couldn’t survive. We dropped it on concrete several times, jumped on it, skipped it across a small pond, and it only suffered a couple of scuffs.

While the Sonim XP8 isn’t for everyone, myself included, it might be the perfect device for someone like my father. He doesn’t care about having the slimmest or most attractive handset. He just wants a phone that works and that that he can watch the occasional YouTube video on, but that also survives blizzards and the dangerous stools he uses at his job.

You can pick up the Sonim XP8 at Telus or Rogers for as low as zero down for two years or $899 outright. You can also grab it Bell for $50 more outright.

While the Sonim XP8 may not be the phone for you, it was sure as hell satisfying to drop.

Update 22/07/2019: Sonim says that with XP8 features Android Oreo with Bell. The smartphone will also be updated to Oreo with Telus and Rogers in Q3, according to the company.