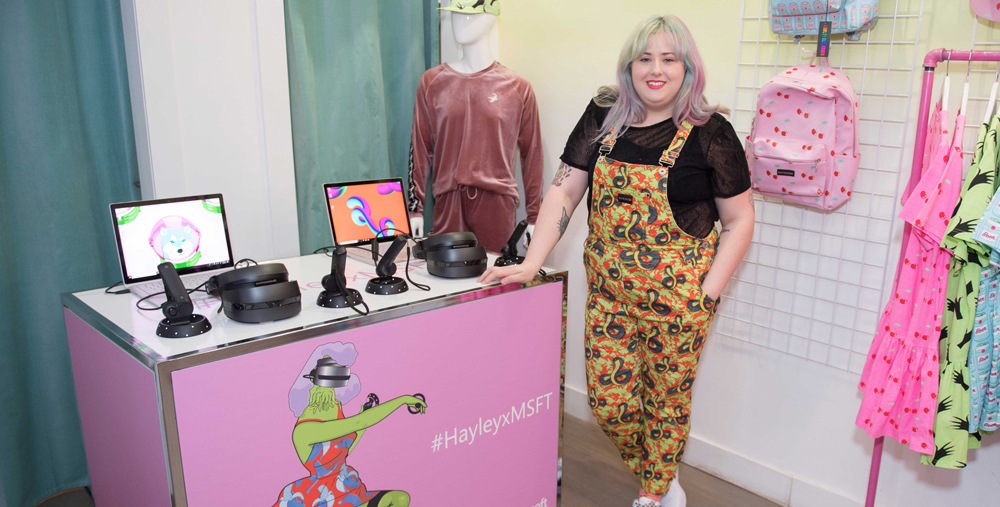 Virtual reality and augmented reality are burgeoning industries, both of which have experienced explosive growth in recent years as they continue to become more and more accepted by the mainstream.

Microsoft Mixed Reality, which the company touts as a blend of both augmented and virtual reality, is attempting to carve out a niche of its own by offering a unique experience with its own advantages. The term mixed reality (MR) has since been adopted by the virtual reality and augmented reality industry in general.

MobileSyrup was recently invited to participate in an exclusive mixed reality experience: a collaboration between Microsoft and Toronto-based artist/fashion designer Hayley Elsaesser titled Cosmic Dread. Before and after the demo, we had a chance to chat with Microsoft HoloLens and mixed reality lead Michael Thibodeau, as well as Elsaesser herself, to discuss the artistic venture as well as some forward-looking applications for the technology.

“Usually, [mixed reality] is talked about in consumer space… what we’re doing is now talking about how there are a lot of commercial applications as well,” explained Thibodeau. “The idea of this platform and things being leveraged across it is the ability to convey information and immerse the user in different ideas to consume digital content.” 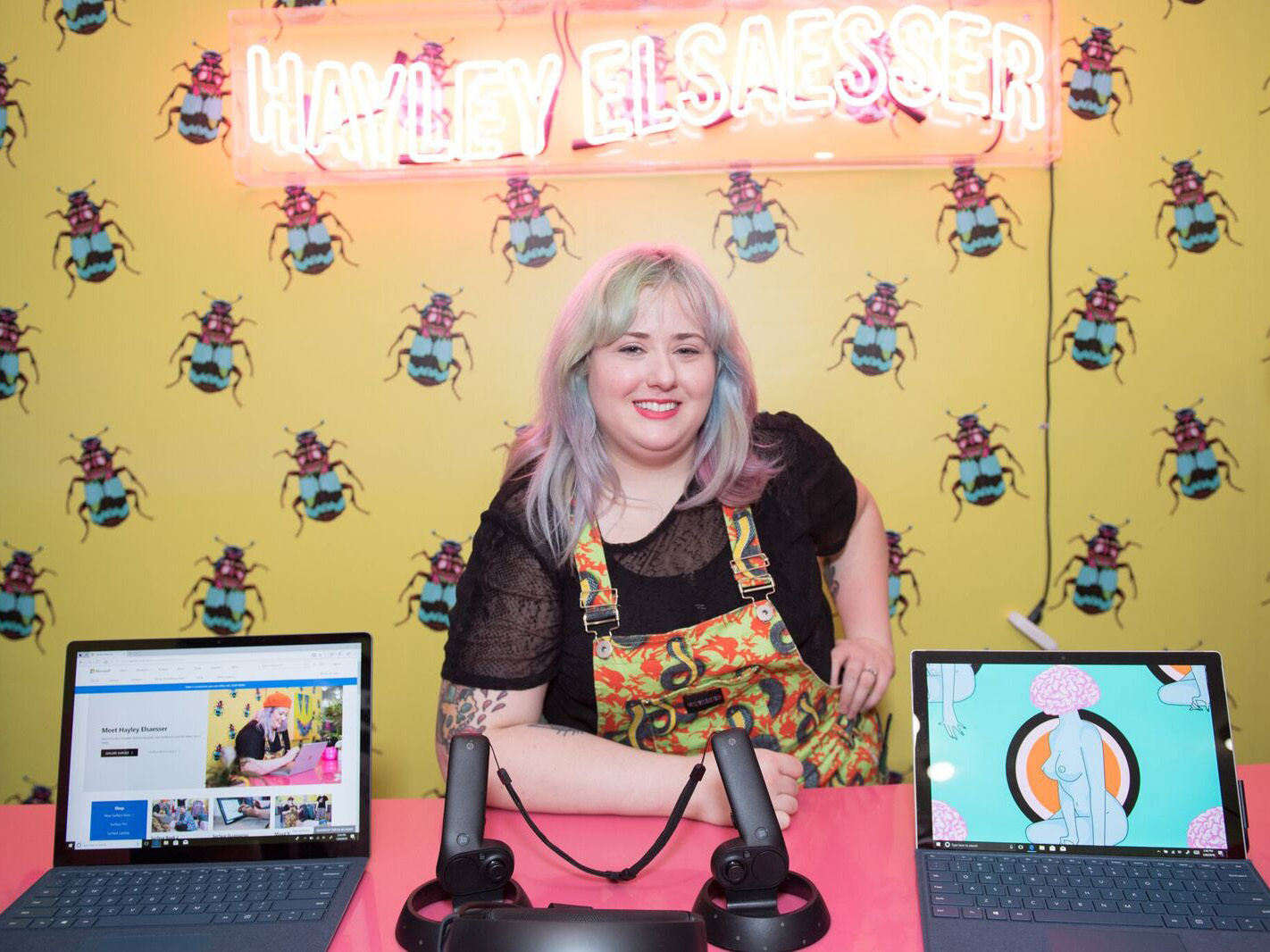 The primary component of Cosmic Dread was a virtual reality tour through the ‘Cliff House,’ the digital hilltop abode that serves as a sort of personalized hub area for mixed reality users.

Digital prints of Elsaesser’s artwork adorned the walls, while the back wall and ceiling peeled away entirely to reveal a myriad of floating holographic models; everything from a giant alien creature to cat-shaped planetoids to a floating astronaut’s helmet. The designer states that the experience was primarily inspired by classic science-fiction and cosmic horror media, especially the likes of Ridley Scott’s Alien and the works of H.P. Lovecraft.

The main attraction of Cosmic Dread was a photorealistic hologram of Elsaesser herself (clad in a brand new outfit of her own design), which greeted tourists with a wave and a smile before providing a brief explanation of the exhibits. Thibodeau said the hologram was created by scanning Elsaesser with more than 200 cameras at Microsoft’s mixed reality studio in Seattle, allowing them to then generate a 3D model based on those scans and insert her into the exhibit in the same manner as the various surreal holograms meant to represent the artist’s inspirations.

“Every time I design a collection there’s always some sort of inspiration behind it, and I like to come up with a little ‘story’ to keep it cohesive,” says Elsaesser.

“This is a preview of the kind of worlds I create.”

Movement in the Cliff House was handled with ‘fishing line’-style controls, requiring the user to highlight the area they want to move to by holding a direction on the thumbstick, and then being teleported there upon release. Thibodeau says that this style of movement, while slightly immersion-breaking, is designed to combat the feelings of motion sickness and disorientation which some experience while free-roaming in a virtual reality environment.

Despite its limitations, Elsaesser sees great potential in the commercial applications for mixed reality technology, especially as a virtual runway or dressing room. The designer pictures a future in which people can easily scan themselves into MR, allowing them to virtually try on clothes before buying them or experience fashion shows from the comfort of their home. 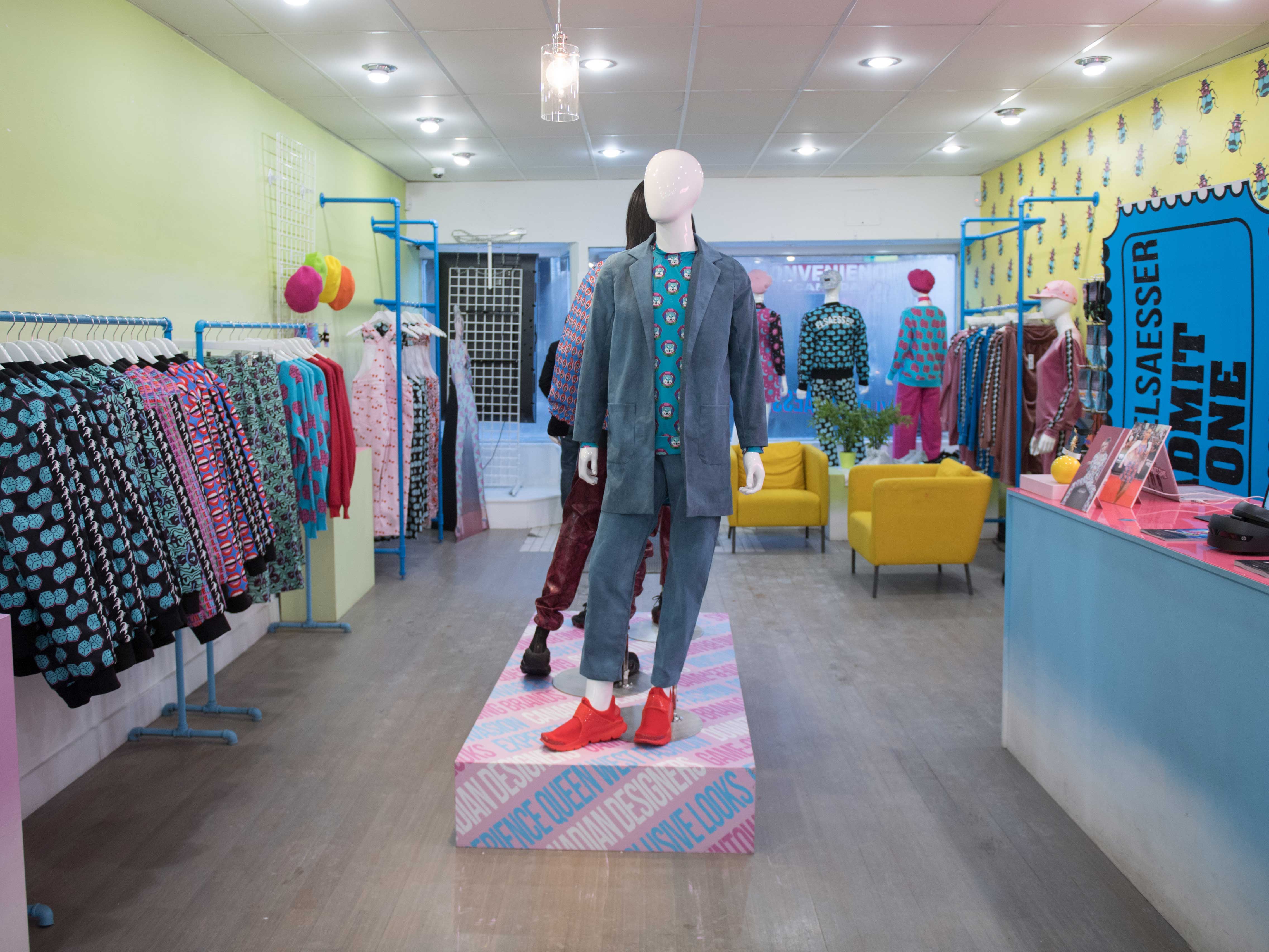 She notes that many of her fans don’t have easy access to her storefront in Toronto, either because they live outside of the city or are differently-abled such that visiting in person would be a major challenge. MR would give these subsets of people a chance to experience everything her store has to offer without any of the hassle.

“This technology is so useful that it has to be adopted by the mainstream eventually,” says Elsaesser. She also spoke to its usefulness in training professionals in a zero-stress environment, or simply providing artists with a brand new creative outlet that allows them to work without limitation.

The artist’s other recent ventures include a series of digital art pieces drawn using the Microsoft Surface tablet computer, as well as a full suit made entirely out of the computer giant’s patented ‘alcantara’ material.

“I’ve worked with Microsoft in the past… we wanted to explore what was possible with this virtual space. I already had the idea for the collection, but it just happened to match so well with the futuristic technology they had here,” she says, looking back fondly on the making of Cosmic Dread.

Elsaesser and Thidobeau both expressed hopes that more mainstream institutions and brands adopt mixed reality technology in the near future.

“I think it’s just so much fun, and so immersive,” Elsaesser said at the conclusion of our chat. “[Mixed reality] is a tool to assist, it’s a tool to bring ideas to life, and it’s a tool to better communicate vision. No matter what field you use it in, the possibilities are practically endless.”