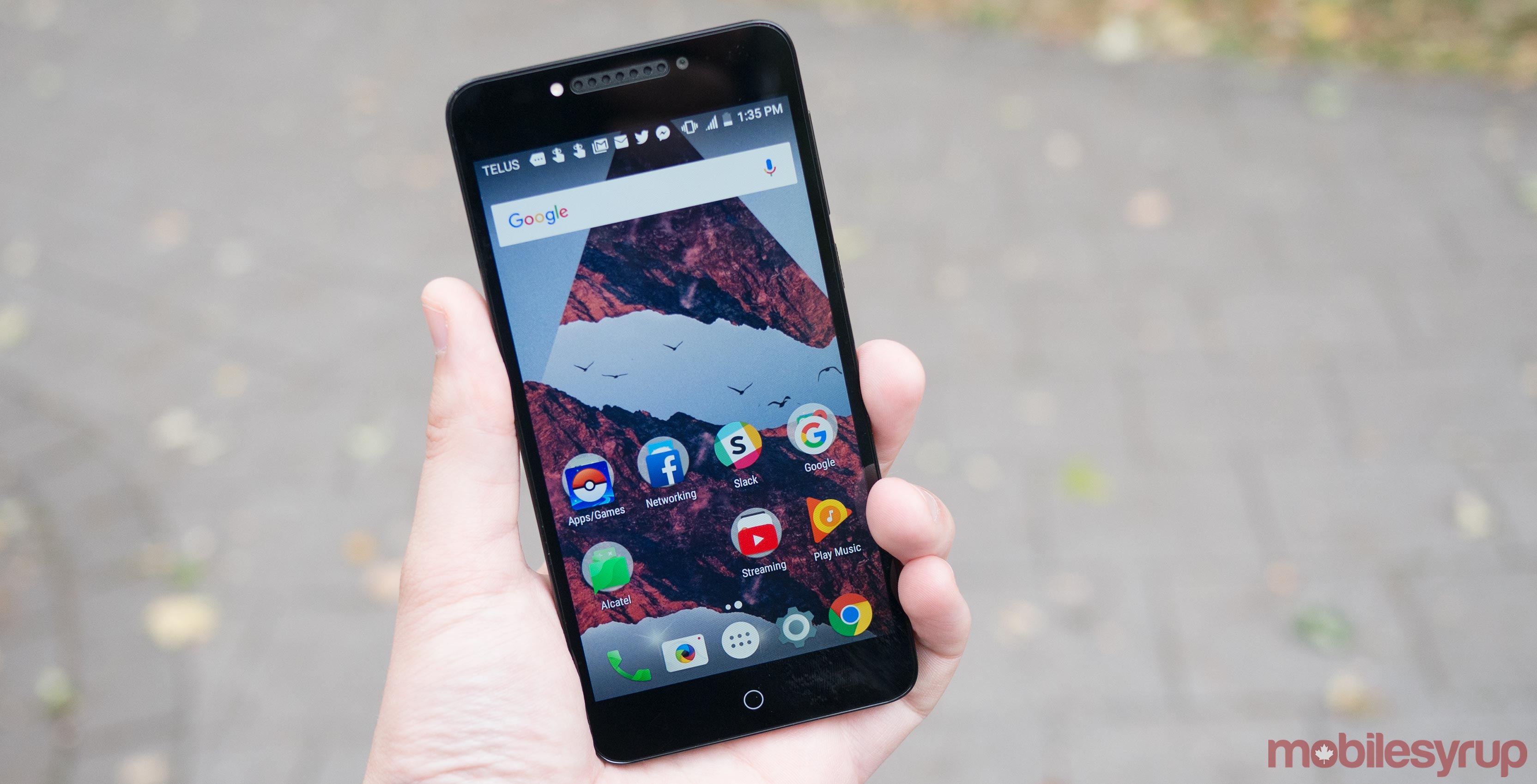 Place Alcatel’s A50 next to a Nexus 5X, and you’ll be hard-pressed to notice any major differences.

Both are sleek, black devices with power buttons and volume rockers on the side that greatly resemble the archetype of a smartphone. 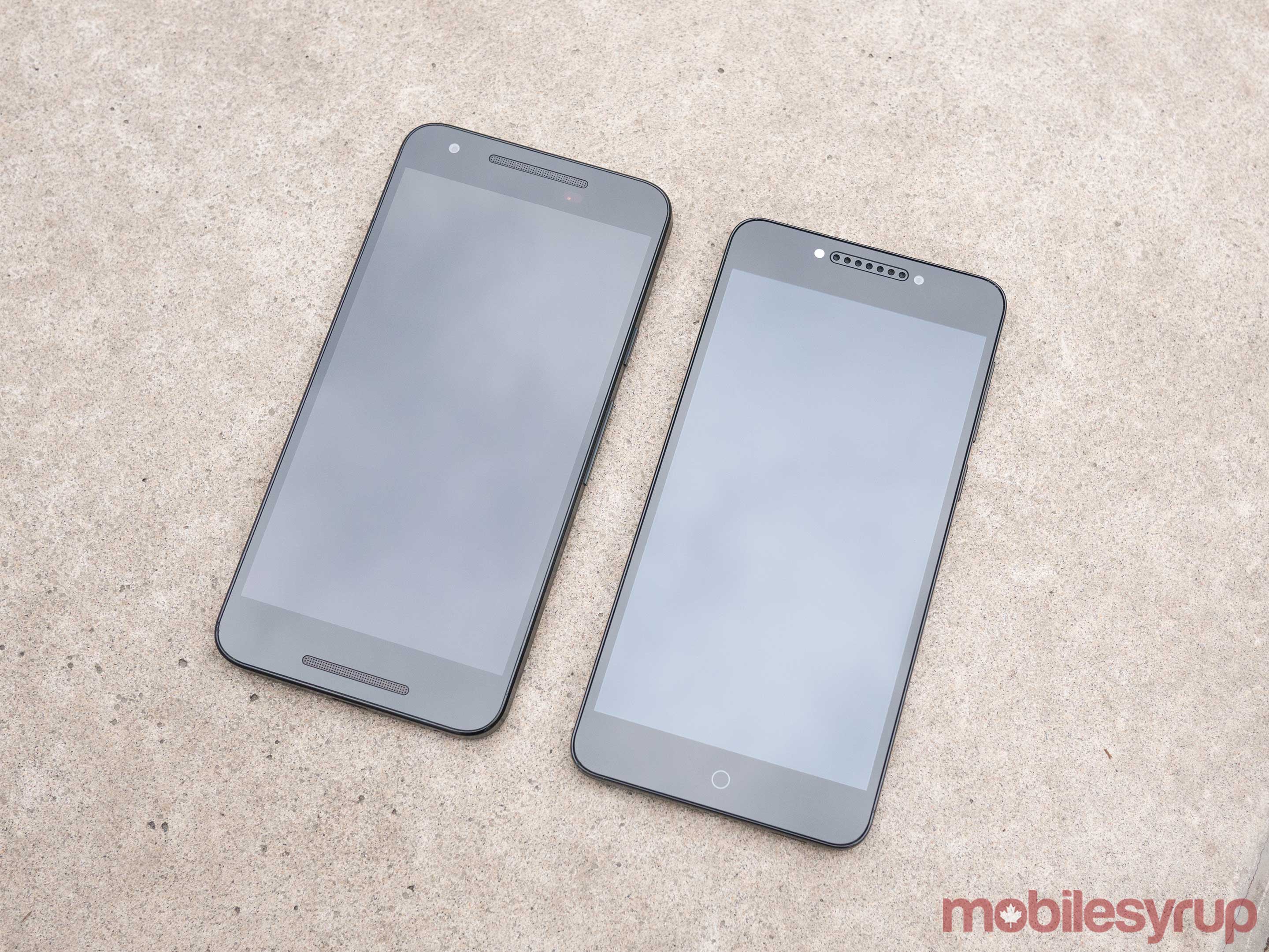 That being said, with its inferior screen, lack of NFC, lack of fast-charging — in spite of it featuring a USB-C port — and its slow, sluggish performance, it’s difficult to say that the A50 compares favourably against the now almost two-year old Nexus 5X.

However, at an admittedly affordable $240 CAD outright — and even cheaper on a fixed-term contract with Telus or Videotron — it’s also difficult to admonish the A50 too harshly for its faults.

An older design that still checks out 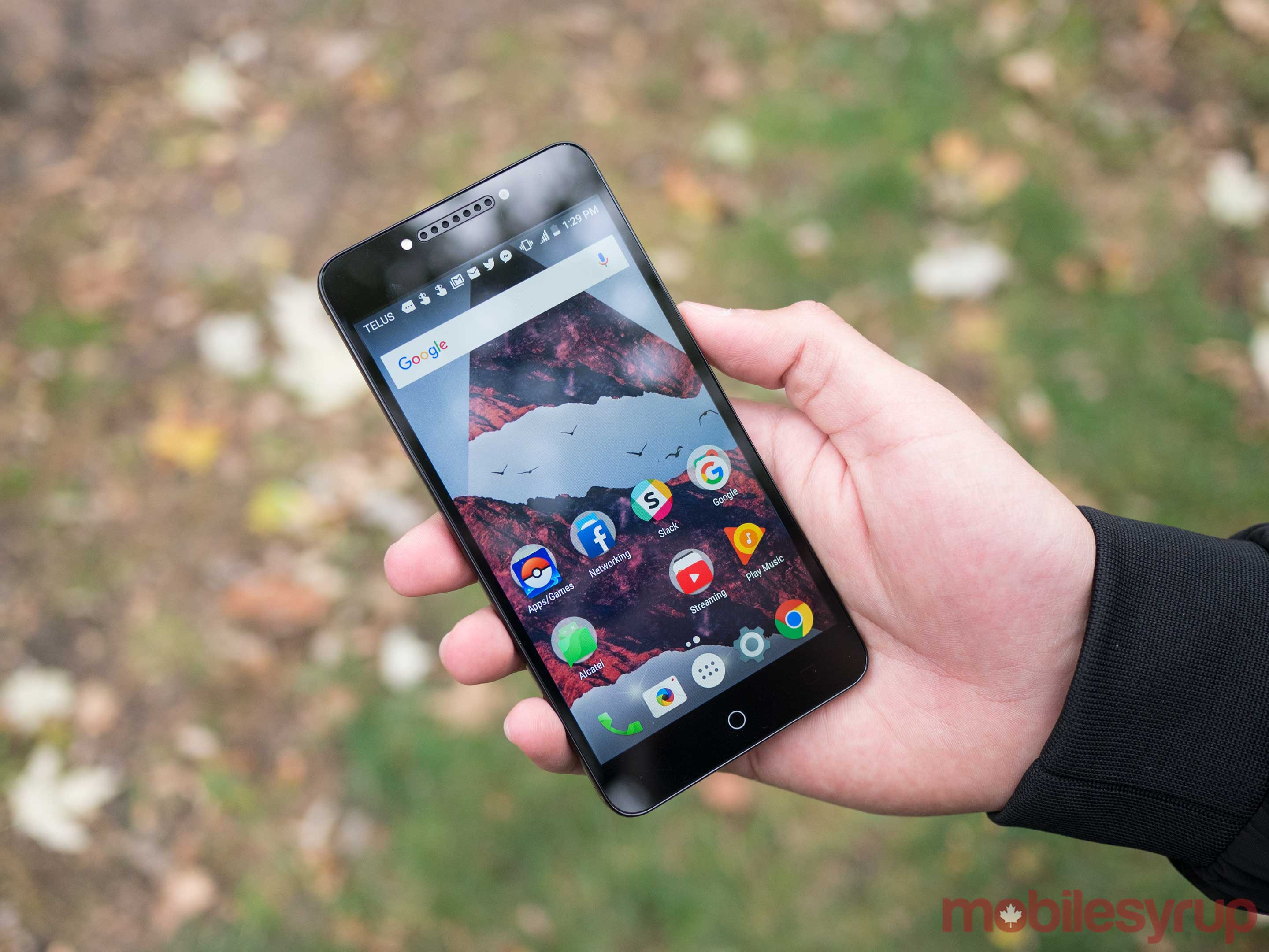 There’s really no denying the fact that the Alcatel A50 is an artifact from a different time before device manufacturers began waging war on bezels.

The phone’s top bezel houses its speaker, a front-facing camera (more on that later), an LED notification light, as well as an ambient light sensor. The phone’s bottom bezel houses the device’s capacitive back, home, and multitasking buttons — which also can’t be remapped or removed in favour of on-screen buttons. On the right side, you can find an awkwardly placed volume rocker above a shallow, mushy home button.

There’s a headphone jack — thank goodness — on the top of the device, and there’s a USB-C port on the bottom, right next to the downward facing audio speaker. The rear-facing camera’s on the back, along with a surprisingly bright flashbulb. There’s also no fingerprint sensor anywhere on the device — it’s software unlock or bust.

I’d use the word restrained to describe the A50 milquetoast design, but it’s more accurate to say that its design takes no risks — needless, needed or otherwise. It’s an outright inoffensive look that doesn’t draw attention to the phone, but also does little to upset the user. 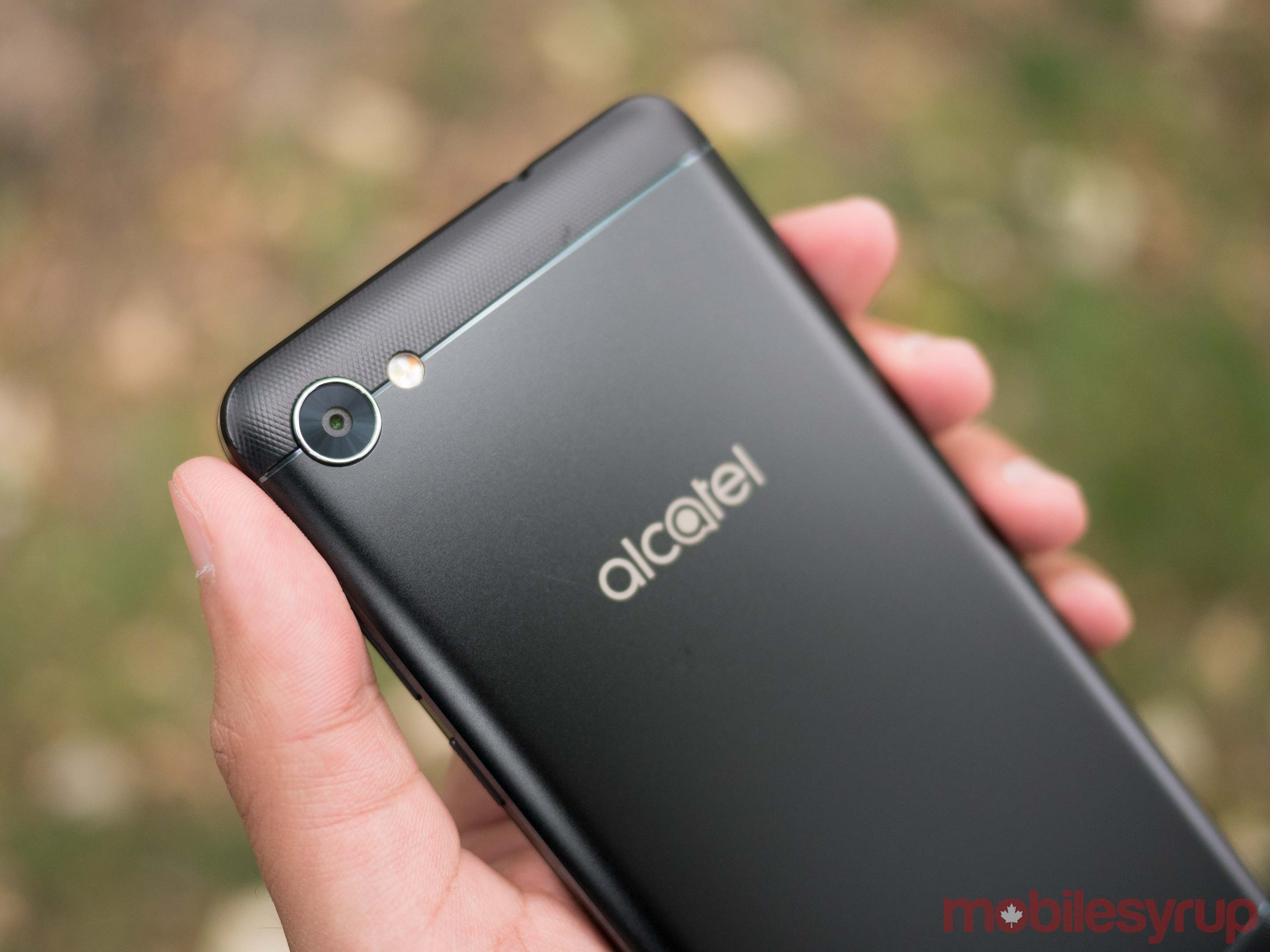 However, I’m still not entirely sure what the reasoning was behind placing the power button below the volume rocker. As a result of this poor placement, I quite often lowered the phone’s volume when all I wanted to do was turn on the screen to check the time.

A few accidents would be easy to dismiss as clumsiness on my part, but the volume-down key’s placement lines up perfectly with the way I typically hold my phone, which meant that I often had to actively remember to move my thumb down, instead of instinctively turning the screen on and off.

Call it a strange complaint, but it’s one of those small design flaws that tends to grow more burdensome with time.

The blessing that is near-stock Android 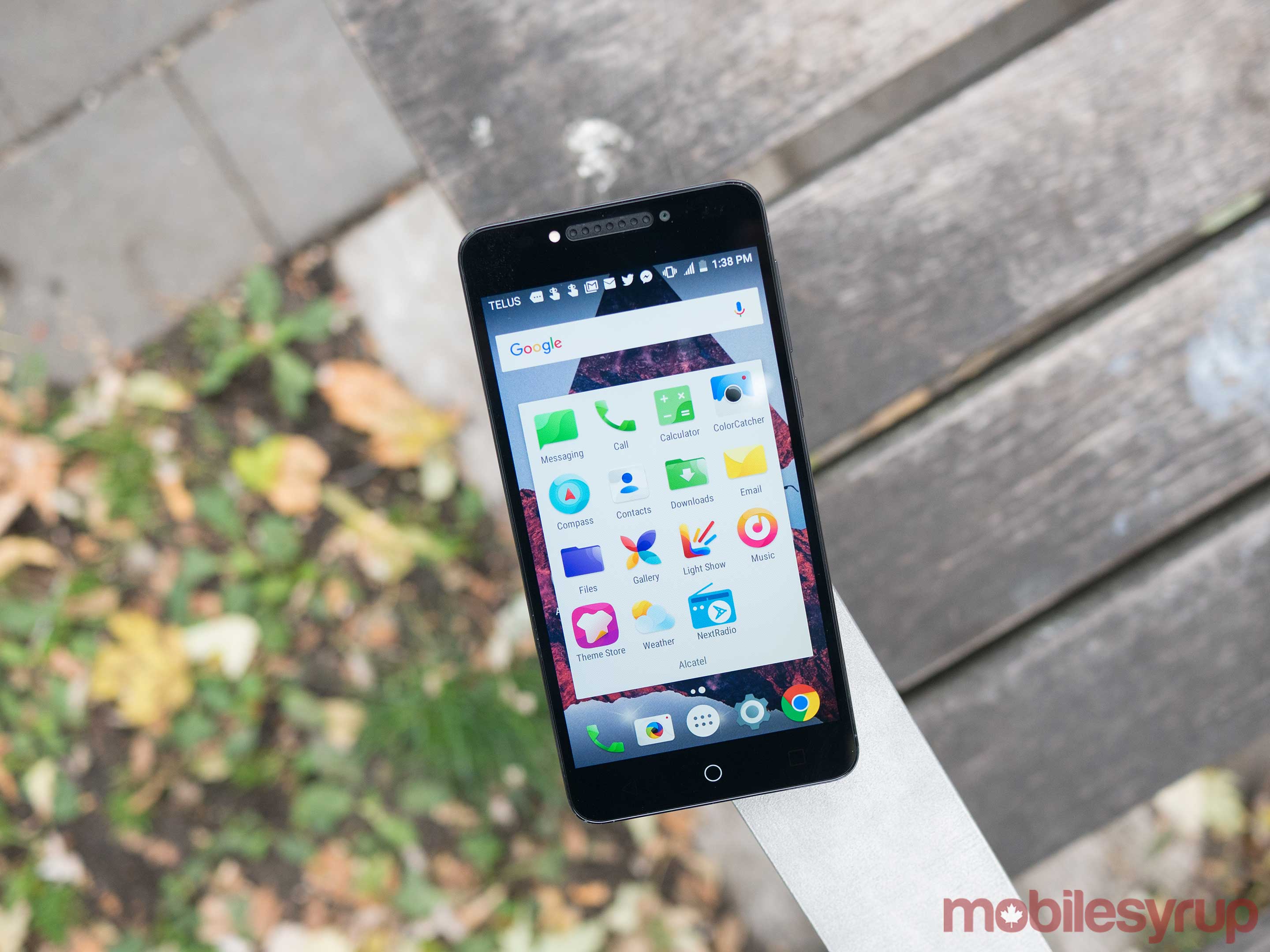 For all its physical similarities to the Nexus 5X, out-of-the-box, it’s easy to see that this is not a Google-branded phone. The A50 ships with Alcatel’s Joy Launcher as the default home app, as well as a collection of 15 specific Alcatel apps — most of which are copies of Google’s existing suite of apps.

If there’s any one default application of note, it’s the NextRadio app, which allows A50 owners to tap into the phone’s FM radio to listen to local radio stations. That being said, you can download NextRadio on most Android phones.

In spite of these criticisms, it’s important to remember that in the age of modern Android, it’s possible to install almost all of the apps that are Pixel and Nexus standards, with some exceptions that include the phone and camera apps. 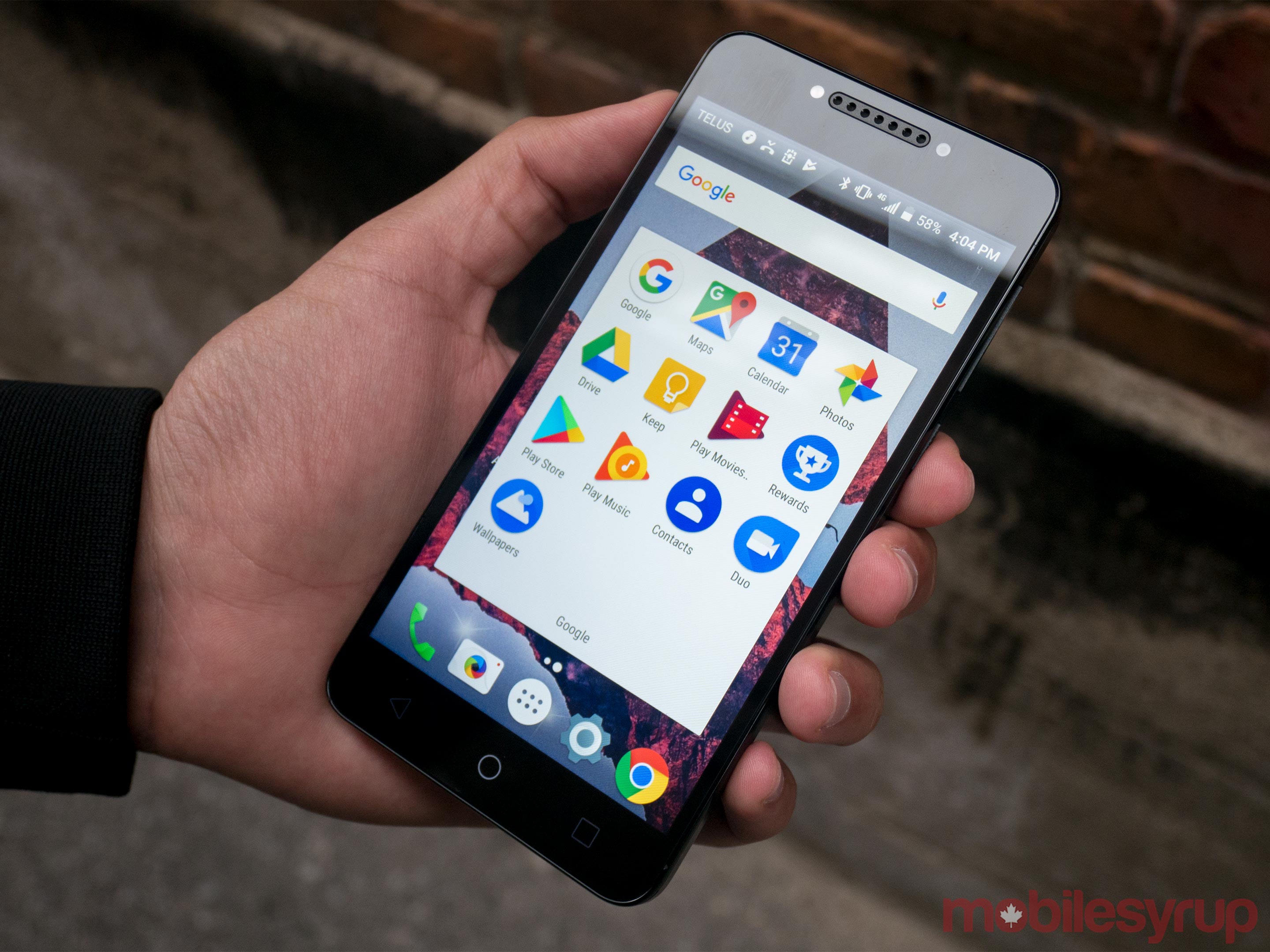 That is to say, if you don’t like the Joy Launcher or any of Alcatel’s default apps, you can replace them with selections from Google’s suite of applications — including the Google Now Launcher. You’ll still lose some of the phone’s 16GB of storage space because you can’t delete any of the Alcatel defaults, but the A50’s expandable storage (up to 128GB via MicroSD) certainly helps make up for the lost space.

What extra storage can’t make up for, however, is the A50’s sluggish performance — no doubt a result of the phone’s MediaTek-manufactured MT6738 processor and a lacklustre 2GB of RAM. Make no mistake, my issue isn’t with the processor’s in-app performance. In sheer terms of being able to do things, the A50 very rarely froze or crashed apps.

In fact, switching between memory-draining apps was a breeze, and while I didn’t play too many games, it was easy running something lightweight like The Firm or A Normal Lost Phone. However, don’t expect the A50 to smoothly render something like Hearthstone — certainly not without heating up. 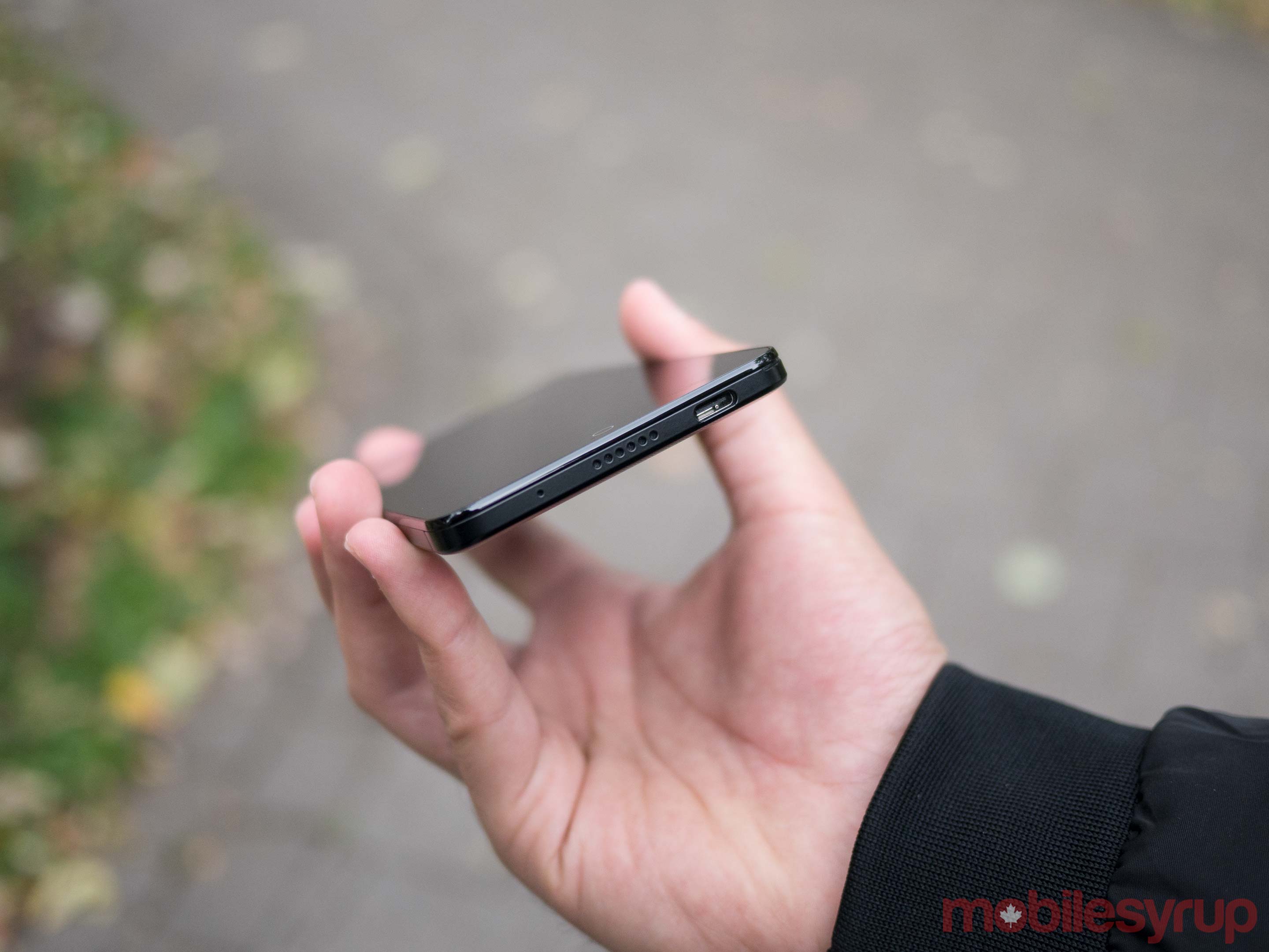 Instead, my chief issue with the A50’s performance has everything to do with the very noticeable lag that results after trying to open an app, as well as the jelly-scrolling issue that consistently plagued every app I used.

All of this is to say that the A50 will get the job done and maintain an acceptable temperature while doing so, but you will need to exercise a certain amount of patience while using the phone. Snappy, the A50 certainly is not.

The A50 is also not a device with a particularly noteworthy screen. The phone’s 5.2-inch TFT IPS display has a screen resolution of 1280 x 720 pixels. Colours don’t pop, whites aren’t bright, and while blacks are certainly identifiable as black, they’re certainly nothing to write home about. 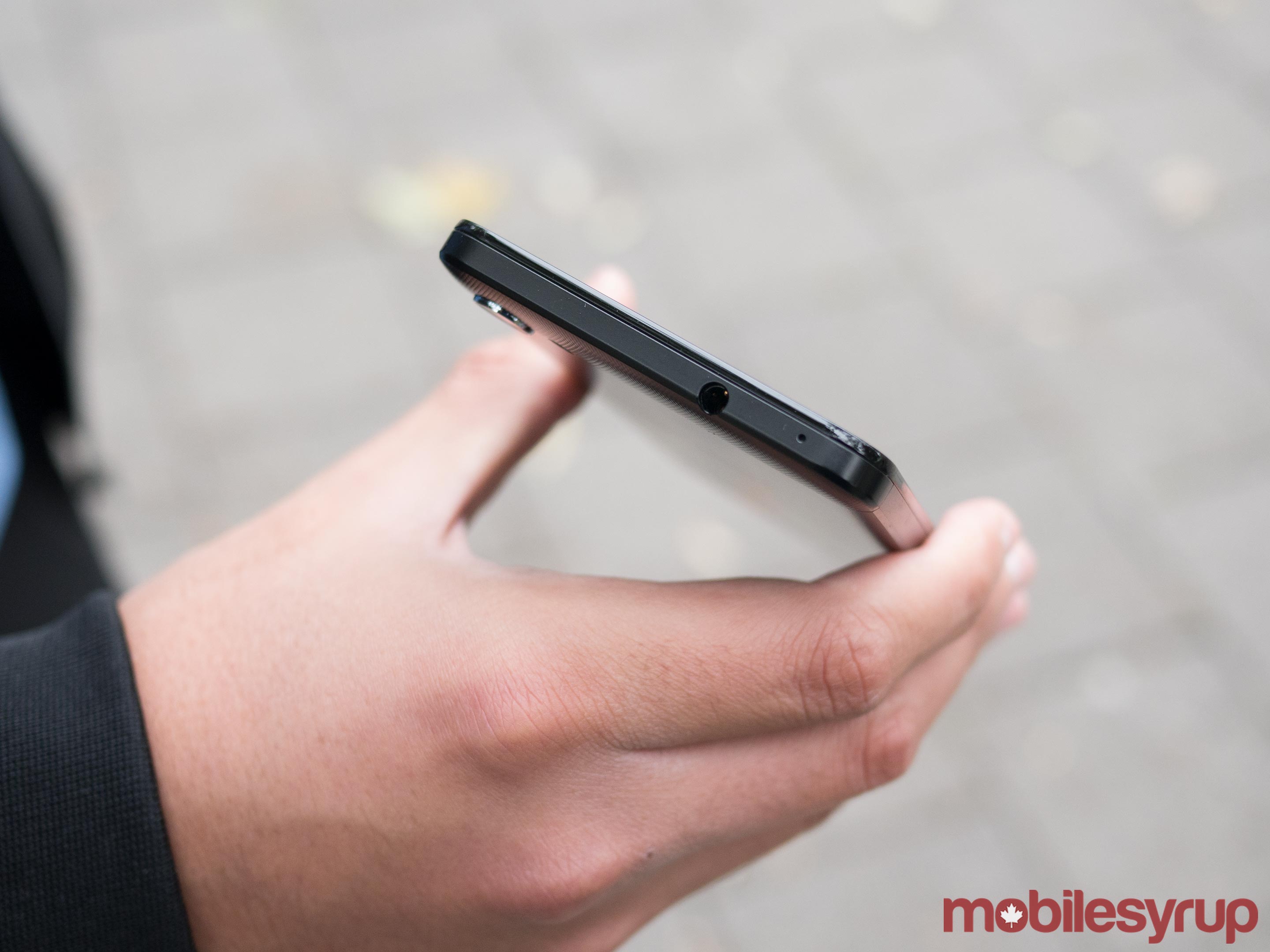 On the subject of battery life, the A50 does a good job lasting through a full day of regular usage. I was able to make phone calls, receive text messages, respond to emails, mess about on social media, read the news, browse Reddit and make it through the day with at least 30 percent battery left.

However, a lack of any kind of quick-charging capability does mean that it takes a while to fully charge the A50’s 2,800mAh battery. It also means that you won’t be able to get 50 percent of power on a 20-minute charge — or some other such comparison. Once the A50’s battery is drained, you’ll need to wait at least two hours before it’s back to 100 percent.

A camera that certainly gets the job done 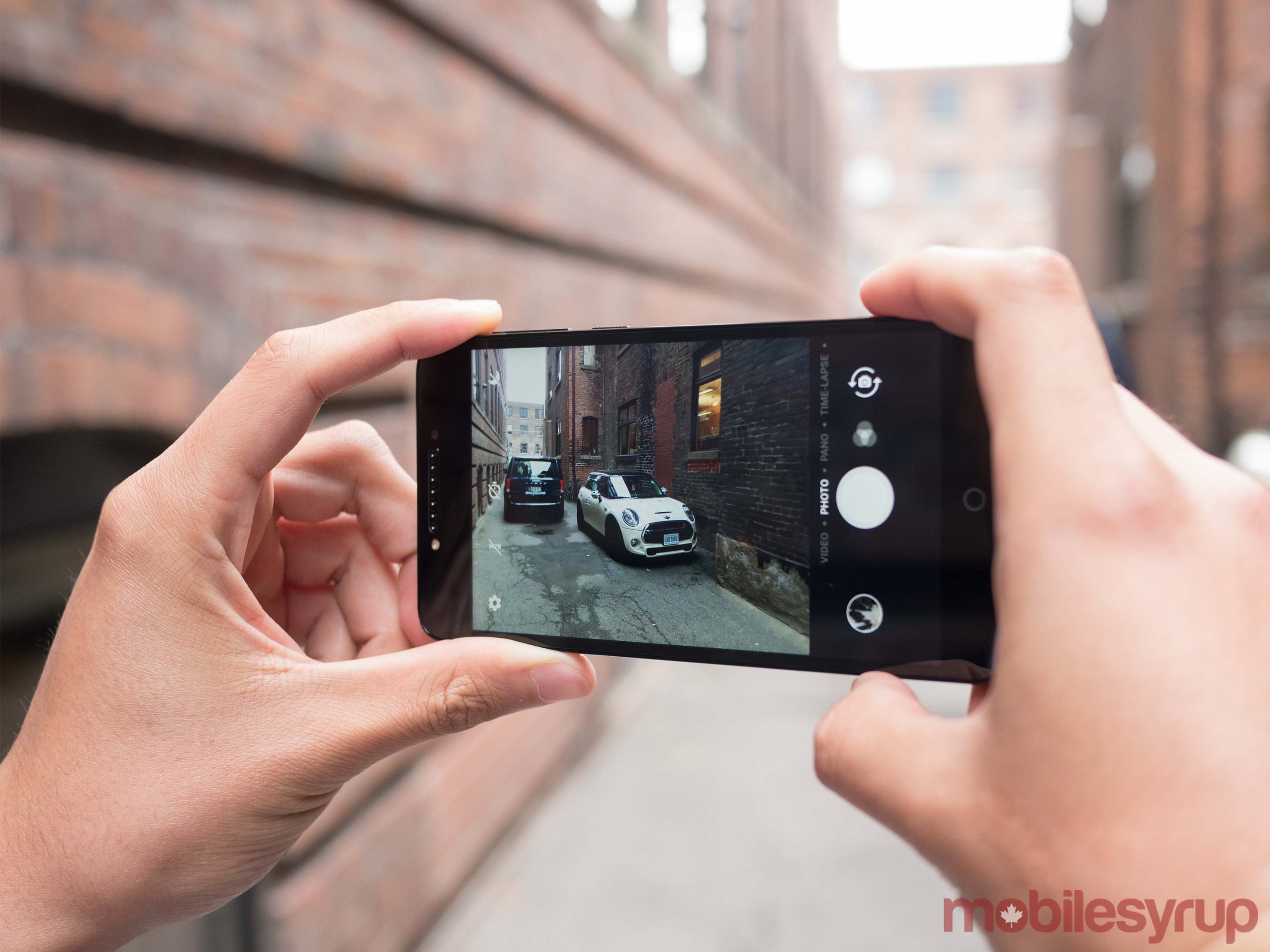 For the relatively low cost of $240 CAD, the A50 delivers a passable photography experience. Granted, the default Alcatel camera app isn’t quick to launch, but in its defence, it’s surprisingly quick to take photos.

Low-light photos and video also don’t look fantastic, but in well-lit environments, the A50 produces images that would be more than welcome on Instagram and Facebook.

The camera app doesn’t allow for very much manual photography either — the most you’ll be able to do is adjust the brightness and apply Instagram-esque filters to change the colour tone of your photos. However, one especially noteworthy feature is the ability to record time-lapse videos.

The A50 can record Full HD video, and the time-lapse feature is definitely something worth playing with. It’s not necessarily better than the time-lapse you’d get with something like a GoPro, but again, the A50’s price really can’t be overstated when discussing the small — and fun — quirks and tweaks within the camera. 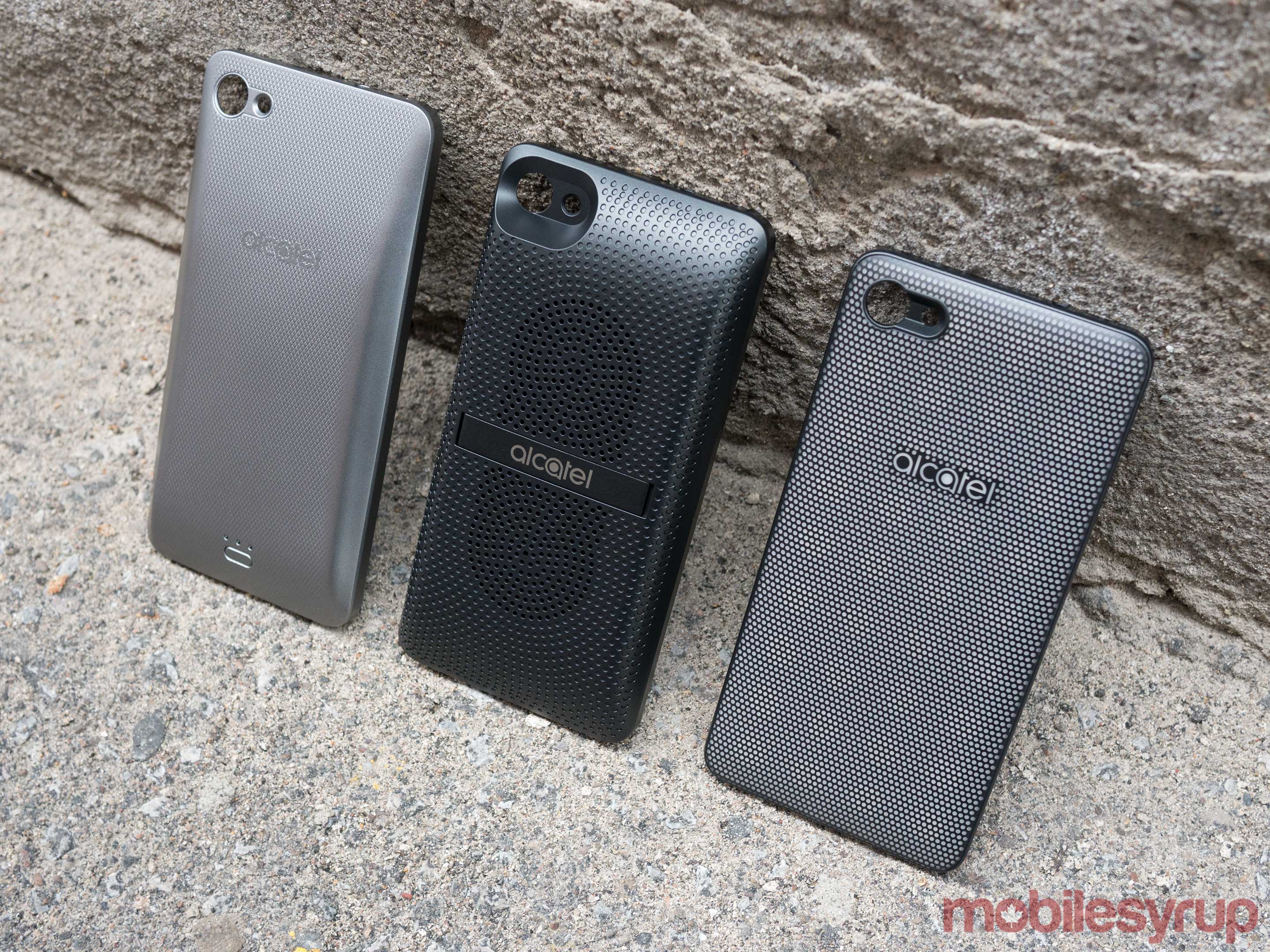 The Alcatel A50 might be a relatively inoffensive device, but it does come with three interesting quirks. Dubbed ‘SnapBak’ cases, the A50 is technically a modular device; it comes with a battery case, a speaker case, as well as an LED case that lights up alongside notifications and music.

The Power SnapBak carries enough power to charge the A50 at least once, and there really isn’t much else to say about it. Once again, the A50 doesn’t have any quick-charging capabilities, which means you’ll have to wait for a while to make sure the Power SnapBak gets fully charged.

The ‘Sound’ SnapBak transforms the A50 into a makeshift boombox; the audio quality won’t elicit any gasps, but it does get surprisingly loud. If you’re not interested in purchasing something like the Beats Pill or some other portable BlueTooth speakers, the Sound SnapBak is a more-than-capable speaker setup. 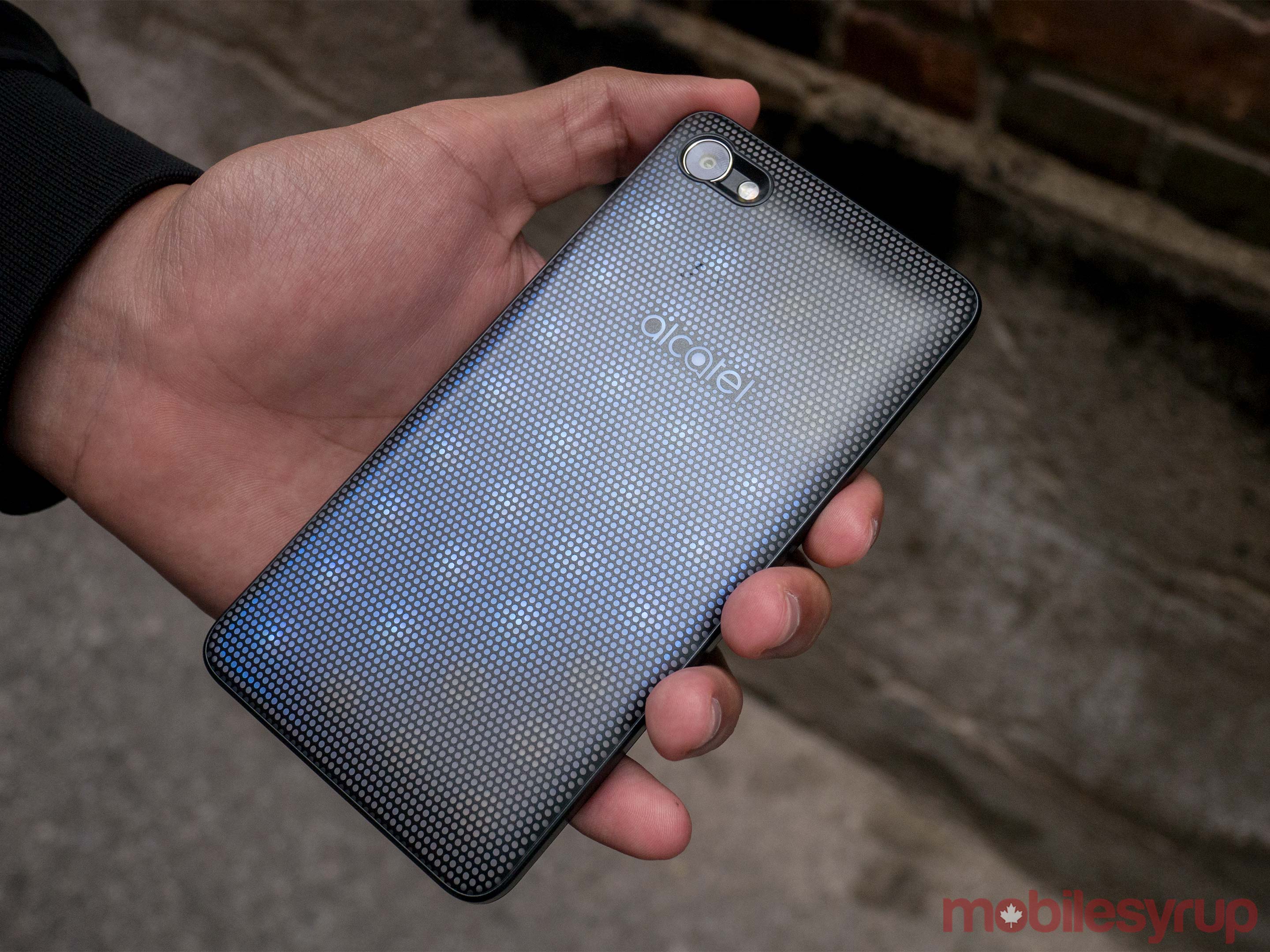 And then there’s the ‘LightUp’ SnapBak, which is inarguably the least useful and yet the most fun of all the A50’s modules. The LightUp case literally lights up whenever you receive some kind of notification. The LEDs also “dance” to any music playing on the A50. You can even customize the LightUp SnapBak’s colours to suit your mood and personal tastes. Again, this is undeniably the least useful add-on, but it’s definitely fun to play with for a short time.

These cases also aren’t terribly difficult to apply or remove — they fit just like the A50’s back cover. To remove a SnapBak, you pry it off like you would a battery cover. To apply a SnapBak, you simply snap it into place.

Don’t get me wrong, the SnapBak cases are absolutely gimmicky — and I have no doubt that few manufacturers are rushing to create original SnapBaks — but all things considered, the cases are certainly useful, if they aren’t at least a little clever.

Not to mention, unlike other — more expensive — phones with modular add-ons, the A50 comes with the full set of SnapBaks right in the box. You don’t have to buy additional add-ons and there’s no promise of more SnapBaks in the months and years to come. What you see is what you get, and what you get is definitely worth the price of admission.

Whenever you’re on the market for anything, it’s best to weigh your options and define precisely what it is you want out of your purchase. With phones, it really comes down to a matter of physical design, operating system, battery, performance, camera, as well as whatever X-factor device manufacturers have chosen to include to sway potential buyers.

The A50’s design is inoffensive. Its operating system is near-stock Android. Its battery lasts through a typical day of use. Its performance is sluggish, but it ultimately gets pretty much every job done. Its camera is surprisingly capable, if not a little underwhelming. As for the X-factor? You get a free battery pack, a free speaker and an ultimately useless, but admittedly cute, light-up cover. All of this costs $240 outright, and costs less on a fixed-term plan with Telus or Videotron.

Earlier, I said that the A50 looks a lot like the now-out-of-production Nexus 5X. Sadly -- other than external appearance -- the A50 doesn't compare favourably against Google's mid-range budget device released in 2015.

However, the A50 is a great starter smartphone. It’s perfect for parents looking to buy their middle school-aged children an inexpensive, but capable phone. It’s a perfect replacement for lost or damaged devices. Heck, at $240 CAD, it’s actually cheaper than the cheapest iPod Touch, which means that if you really don’t want to buy an Apple product, the Alcatel A50 is a great alternative.

"The A50 is a great entry-level phone that is inoffensive in all the right ways."