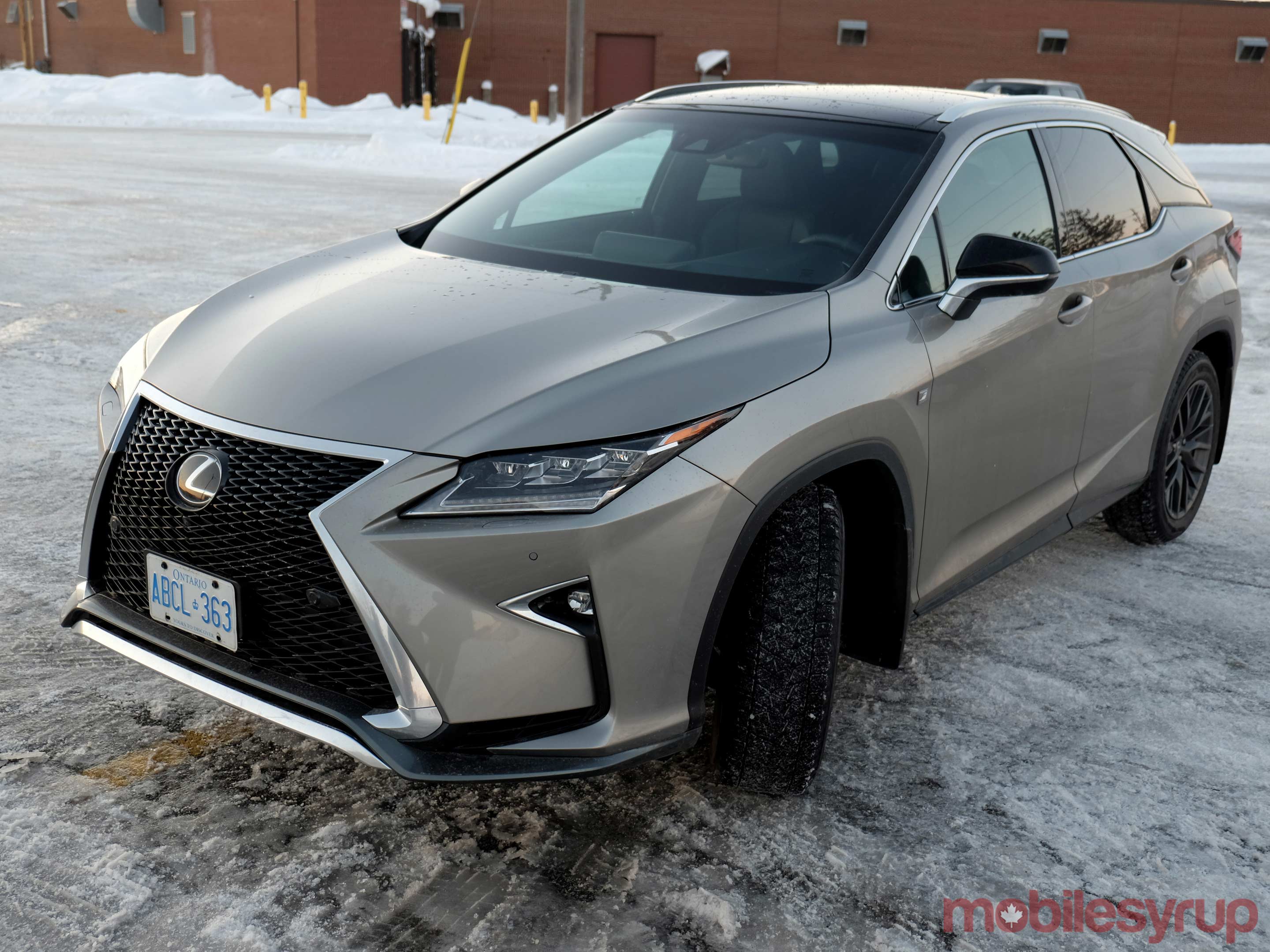 As a luxury vehicle division of Toyota, Lexus is supposed to stand out on its own merits as a brand associated with class and elegance. That should also include new technology, which is evident in some respects, but lagging behind in others.

The lag is in infotainment, where Toyota continues to hold out from embracing Apple’s CarPlay or Google’s Android Auto, preferring to go it alone. Or at least with an allied consortium under the SmartDeviceLink program initiated by Ford. Like many things in the automotive space, this is a long game, except the demand for better mobile integration, coupled with the inherent need for greater safety, is forcing automakers’ hands.

Under this pretence, I took a 2017 Lexus RX for a weeklong test drive to gauge the performance of an infotainment system that doesn’t have what an increasing number of other makes already do. 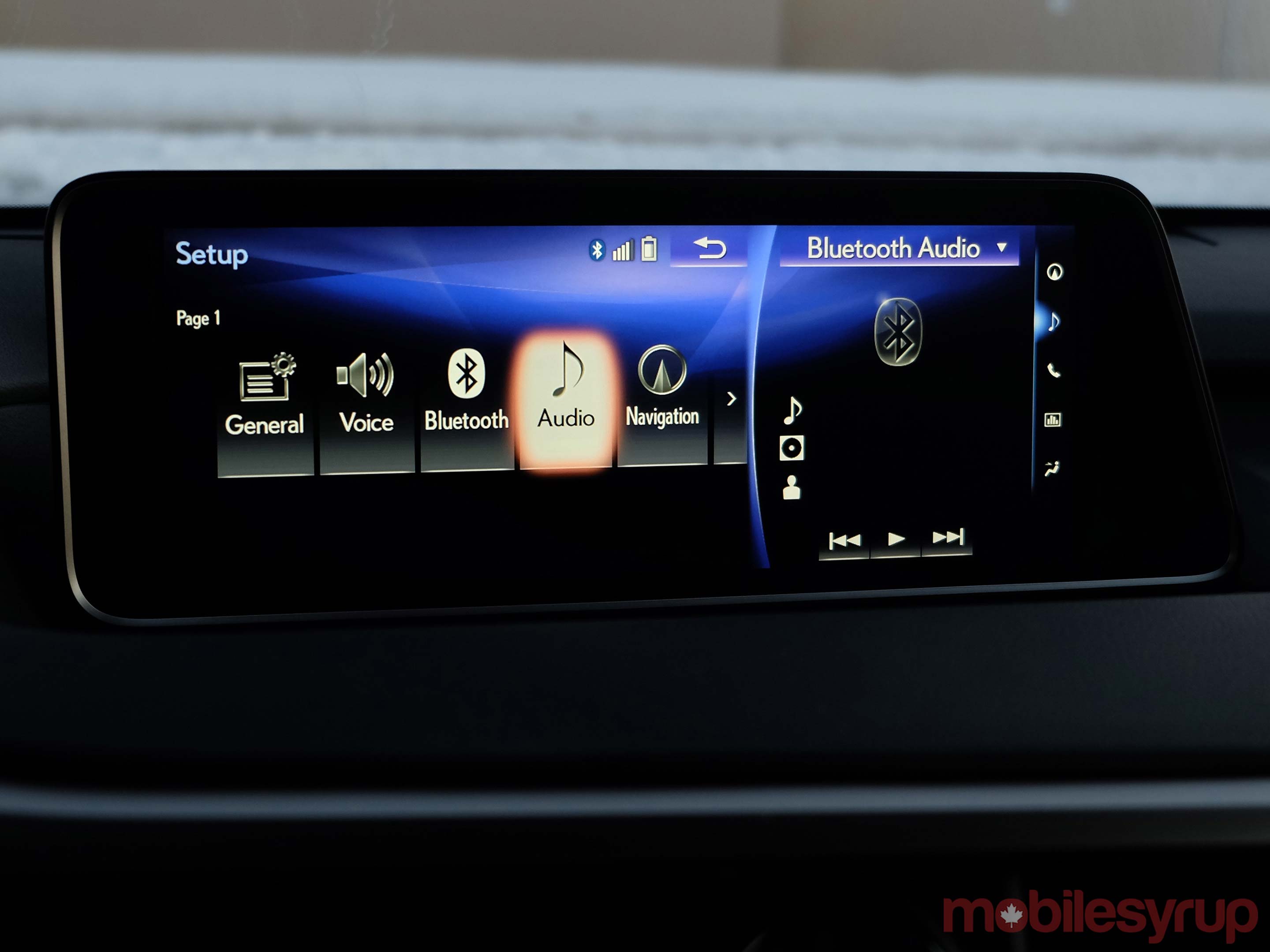 Back in June 2016, a software update to late-model Lexus vehicles went awry and incapacitated head units for those affected. The glitch was eventually rectified, but it highlighted how debilitating driving a car can feel like when nothing on the dash works. That sense of hopeless limitation is part of what is going on here.

Not that there wasn’t much inside to get comfortable. The 15-speaker Mark Levinson sound system was on point. The seats super comfortable. The ride smooth as ever. From heated seats to leather interiors, the cabin had plenty to like.

Lexus’ Remote Touch system is in the same vein as what German automakers tend to utilize: a large display with an analog control scheme on the centre console. Rotary dials tend to be the method of choice for them, whereas Lexus has gone with a floating-style pad that feels like a cross between a mouse and a joystick.

It took some getting used to, and sensitivity was customizable, ensuring anyone could really learn how it’s done. As the primary input method for just about anything on the system, there is no touchscreen to deal with. Big shortcut buttons for Map and Menu, plus a back button were good bookends in negating the need to always use the pad. Up and down buttons also make navigating lists very tactile when the mood strikes.

Instead, the monstrous 12.3-inch letterbox display is meant to keep fingers at bay, and I could understand why. It’s simply gorgeous — high-resolution with vibrant colour saturation and big icons and text, the extra real estate makes split-screen setups easy to use. A map could dominate the left side, while the right shows what media is playing, for example.

Voice control is under Lexus’ own Voice Command platform first, which includes an option to “train” it in recognizing your voice and tone better. Siri Eyes Free is also supported, except Lexus did an odd thing in mapping that to a different button on the steering wheel. The regular voice button is specific to Lexus, whereas triggering Siri (while an iPhone is paired or plugged in) requires holding down the call button. A strange choice, and one that I haven’t seen in another make or model to date. 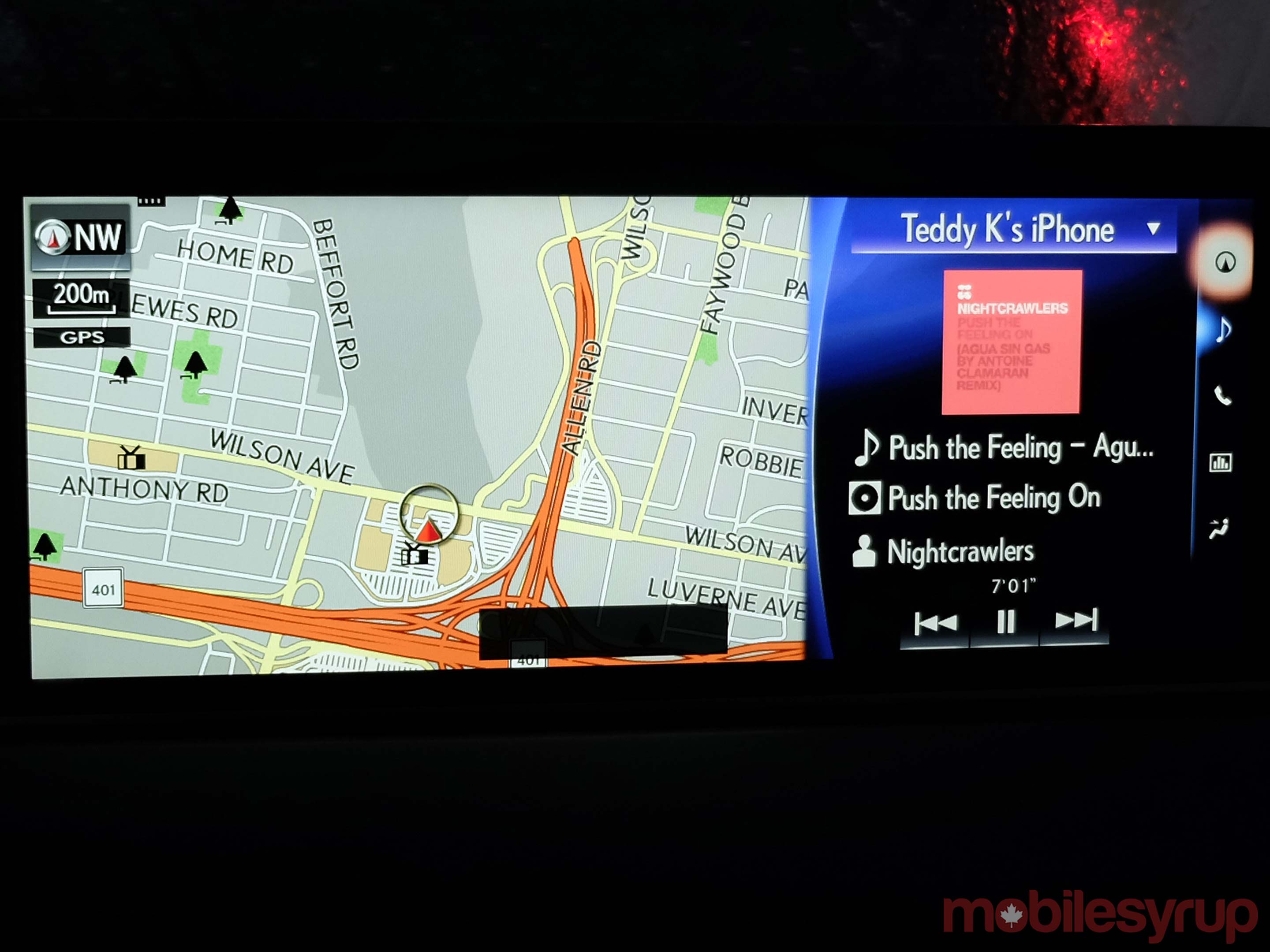 The basics you would expect are on board. Two USB ports that can be used for charging and plugging into the Remote Touch system, plus a 12-volt socket and Aux-In for wired playback. SiriusXM was preloaded too.

Bluetooth is standard inside, and pairing with the car is a simple process. The car can remember up to four devices, except there’s a catch. Only one device can be paired at once, meaning a driver would have to drop the connection in favour of a passenger or vice versa. This also seems very odd at this stage of in-car infotainment, where two devices can be paired at once for incoming calls, audio and voice recognition. One device would simply bump the other one off to play music, for example. Once a call comes in, that phone would take precedence.

I hadn’t realized how accustomed I was to that. As is on the RX, any paired phone would be booted off once another connection was established. Reconnecting again requires manually choosing the desired phone from the screen’s Bluetooth menu or the phone itself. It’s not terribly difficult, but hardly convenient, and treating connected handsets like musical chairs isn’t likely to endear most people. 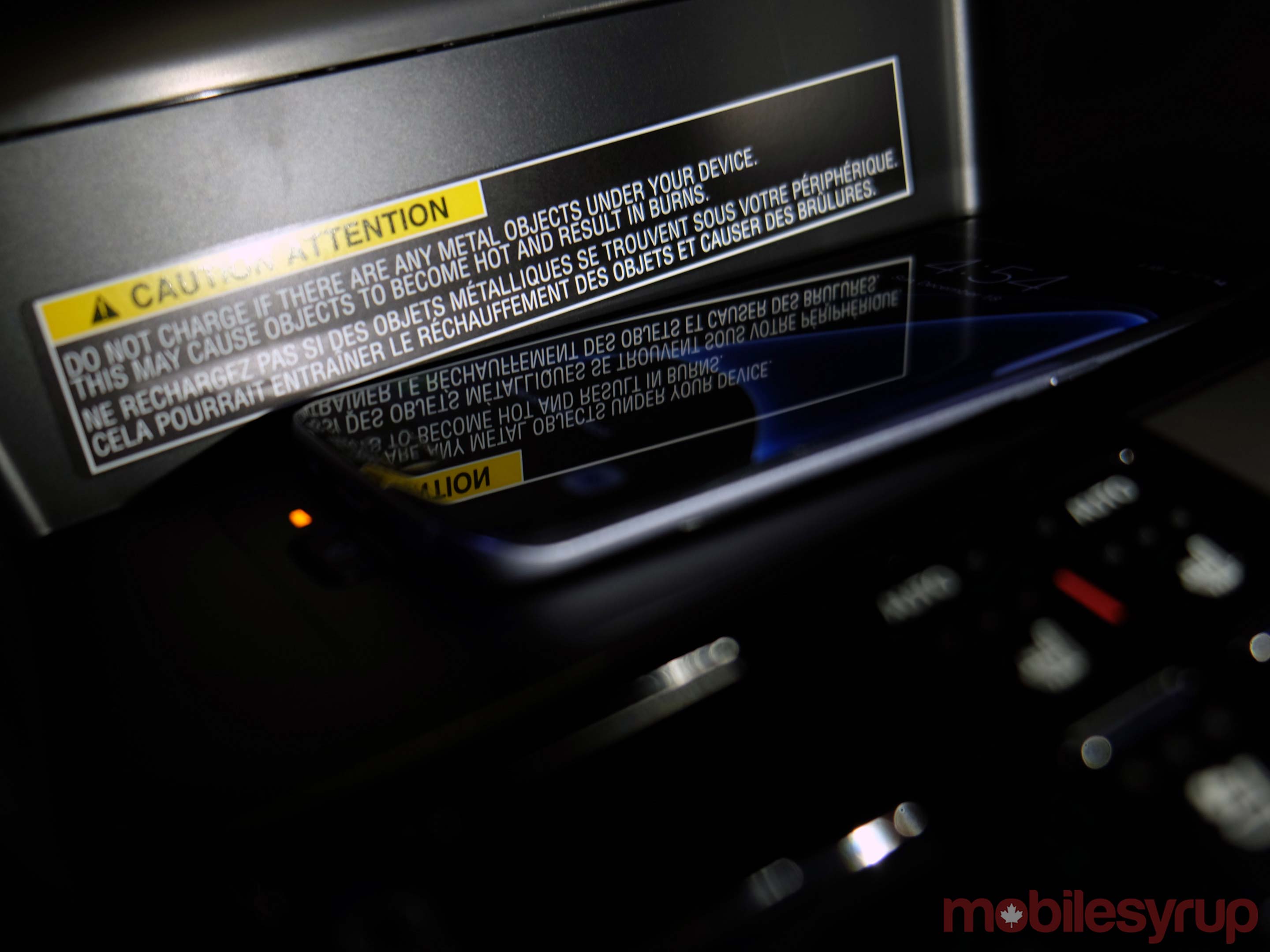 Somewhat surprisingly, there is no in-car LTE connection or Wi-Fi hotspot. The car itself could connect to a Wi-Fi network, mind you, but it can’t create one of its own because Lexus’ Enform service is disabled in Canada. For a luxury brand, it seems an unusual course. There can be rear-seat entertainment to keep kids quiet, yet no in-car Internet to help stream things along for serenity’s sake. The one workaround would be to use your smartphone as a hotspot, which is not always ideal.

The Qi-enabled wireless charging mat lies in front of the gearshift, nestled into the dash, making it a little tight for access, but it works. It is purely for charging, so whichever device is lying on it won’t interface with the system, as a few other automakers have done, particularly BMW and Mercedes-Benz. If paired while charging, however, the phone can still play music or take calls.

Voice-prompted climate control deserves a mention because it’s not as common as it should be industry-wide. More car manufacturers are doing it, and Lexus does it well here. Making it warmer or setting a temperature inside verbally was simple for me. 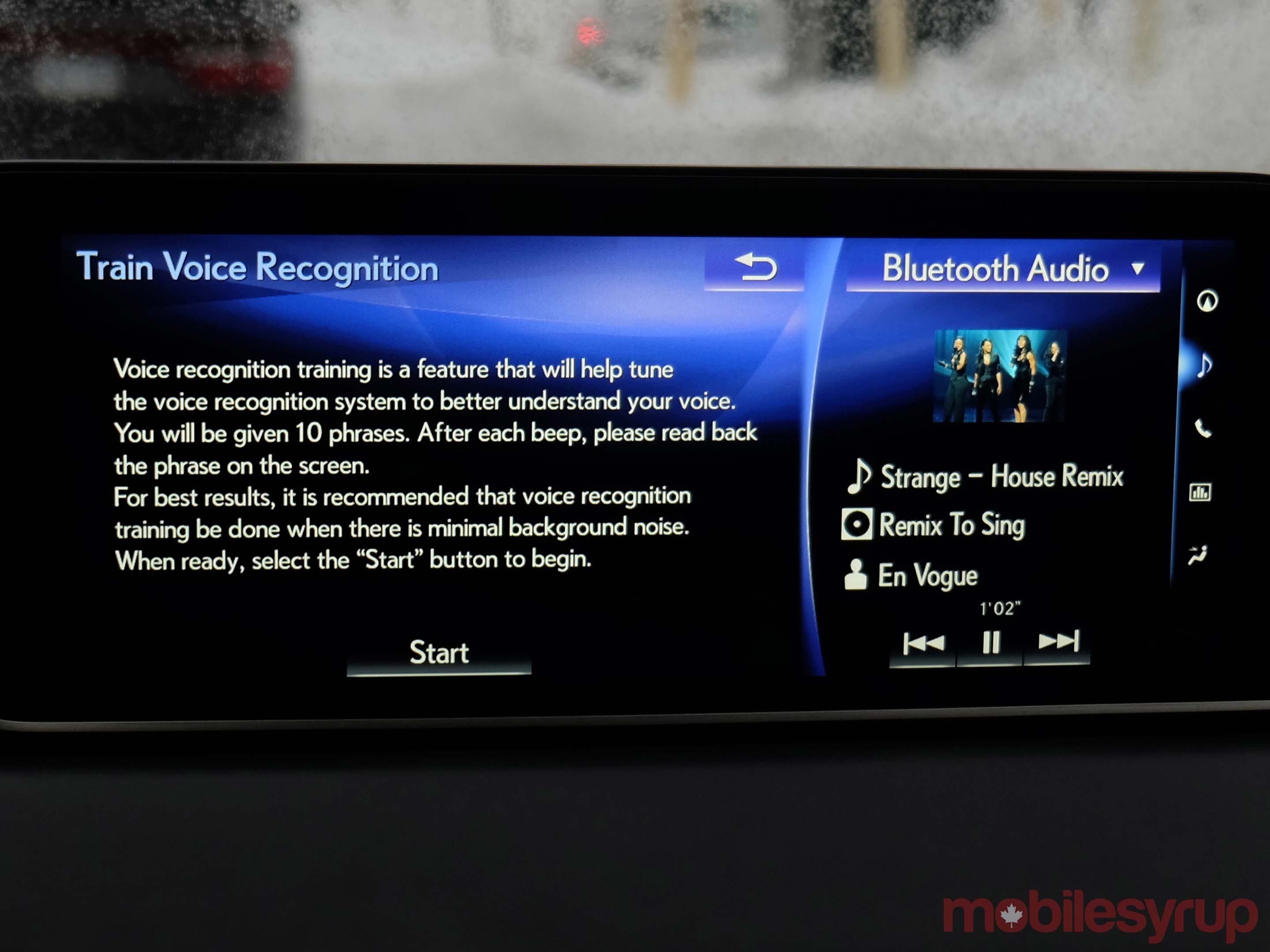 Integration is immediately hobbled because Lexus Enform App Suite doesn’t work in Canada, as it does in the U.S. Even if it did, the number of supported apps wouldn’t be substantial anyway. OpenTable, iHeartRadio, Yelp, Pandora and Facebook Places are a handful included down south.

Had CarPlay and Android Auto been natively added, that lack of support could at least be supplemented. In holding out, Toyota has effectively handcuffed Lexus’ feature set in this area. Smartphone integration is as much about safety as it is about connectivity, and there are holes in how it works here.

For iPhone users, Siri Eyes Free is great to have, even if there is no visual equivalent to augment it, and I would have taken advantage of it for making calls, listening to messages and responding to texts hands-free. Music app playback can be controlled with the steering wheel controls, though navigation is limited to skipping or going back a track.

Android users may also bristle at having no integration at all. Neither Google Now nor Samsung’s S Voice will work, and with app integration not available, the best one can do here is Bluetooth audio. Unless, of course, you set up Android Auto on the device itself and use that as another input method.

While paired through Bluetooth, everything I did on the app ran through the car’s audio system. Be it music on Spotify, radio on TuneIn, Google Maps or phone calls, the Android device had almost completely supplanted the Remote Touch system, at least for the infotainment options Android Auto provides. Plugging it into one of the USB ports to charge also ensures battery life isn’t an issue.

This was precisely what Google probably had in mind when unleashing Android Auto 2.0. Whether it was a Lexus or some other make, a vehicle’s factory limitations would not matter as much when a free mobile solution was available. It would’ve been even better if there was an in-car hotspot to connect to, but even without it, I was pleased to have something more flexible on hand. 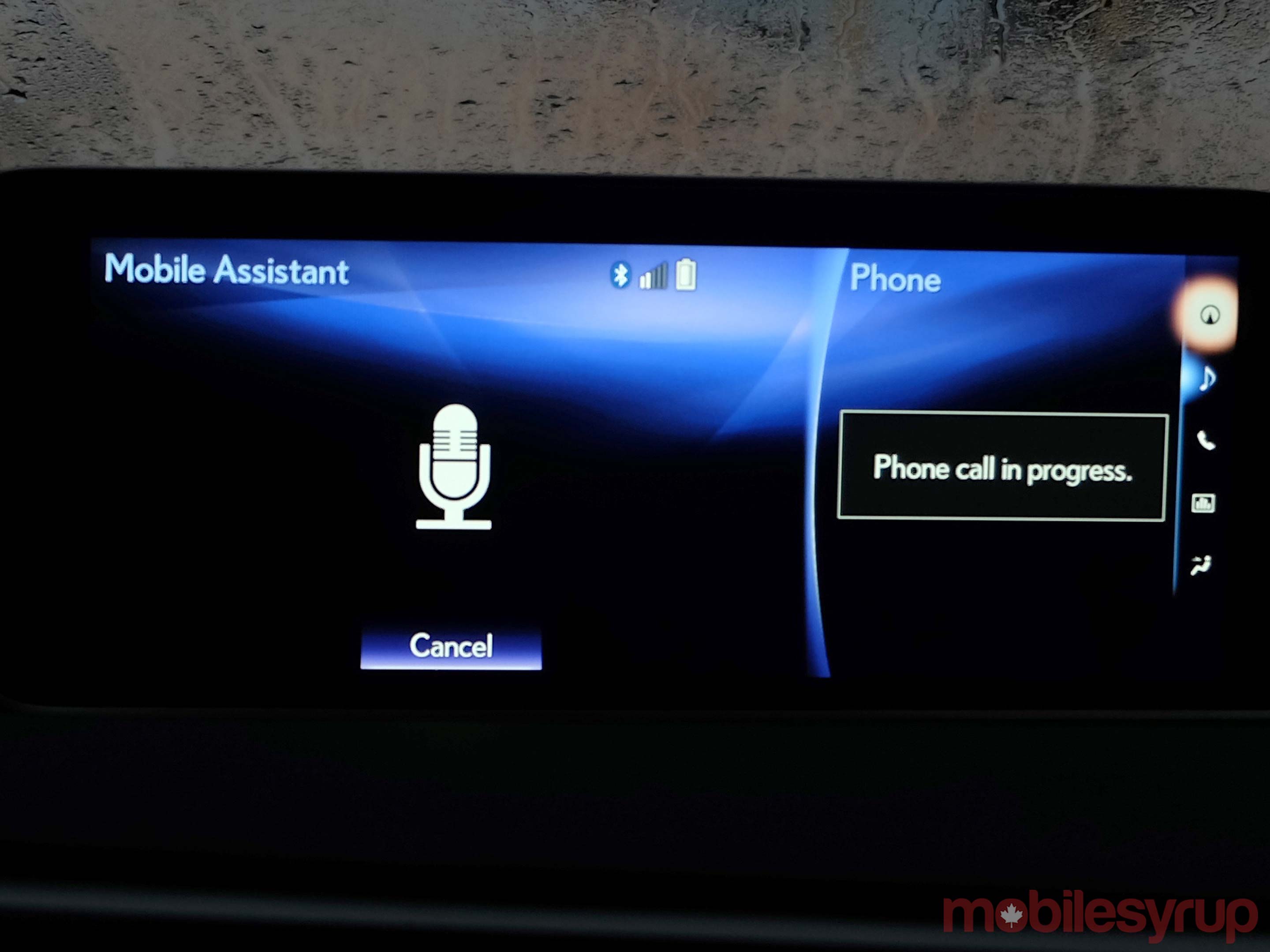 This extends to voice recognition, though Google really needs to put its smarter Assistant platform into Android Auto. Lexus’ own Voice Command system is reasonably effective when it works. It’s just the recognition part that struggles. I went through the 10-step training mode to help it better interpret my voice and tonality, though I’m not sure I noticed a huge difference.

For example, I could say, “list Italian restaurants” for results, but the word “burgers” was misconstrued as “Korbers”, whatever that is. If I said “burger restaurants”, it would tell me it didn’t know what I meant. Names were misinterpreted when making phone calls on an Android device, and verbally noting an address could lead to some confusion too.

These nuisances were indicative of the growing divide between what mobile vendors are doing, and how automakers seem to always fall behind. There is no real learning algorithm at work here, so it’s not like the system could learn that “burgers” or “Mongolian restaurants” might be eateries I’m interested in. Updating the existing vocabulary would require an update, and in my experience, voice platforms generally don’t get them.

This isn’t entirely on Lexus because it’s a problem industry-wide. Some automakers are doing better, but for the most part, their own voice recognition setups only handle the basics well. Anything more intricate is better suited to what non-automotive vendors are working on. 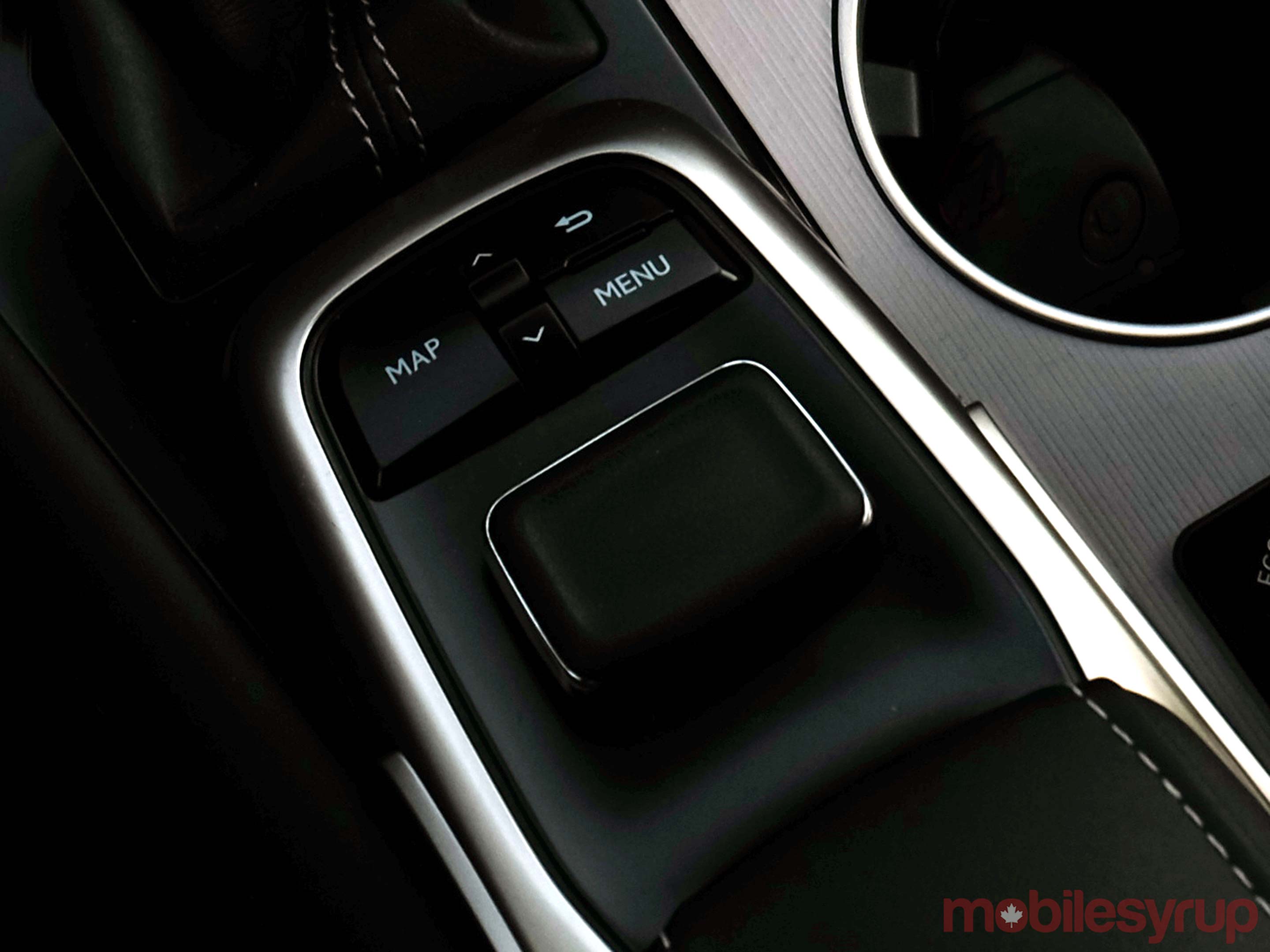 The limitations of Remote Touch, as of today, are one thing. Give it a few years, and the chasm only grows further. The 12.3-inch display shows a big navigation map and a split-screen view anyone can appreciate for its usefulness. Seeing Google Maps or Waze on that screen would have been amazing, but alas, that is never going to happen.

And so, we have a luxury vehicle with a luxurious screen and excellent sound system, yet mobile integration that doesn’t stretch very far. The Bluetooth restrictions felt punitive and unnecessarily tedious. Dubbing Siri Eyes Free as “Mobile Assistant” in the owner’s manual is confusing (though dealerships probably explain that better). The lack of an in-car hotspot also came off as a missed opportunity. Still no Enform App Suite, despite full availability south of the border.

If SmartDeviceLink is to go anywhere in bringing Lexus toward a new infotainment direction, that movement will have to grow quickly, or else it will be only a matter of time before Apple and Google become standard options inside.