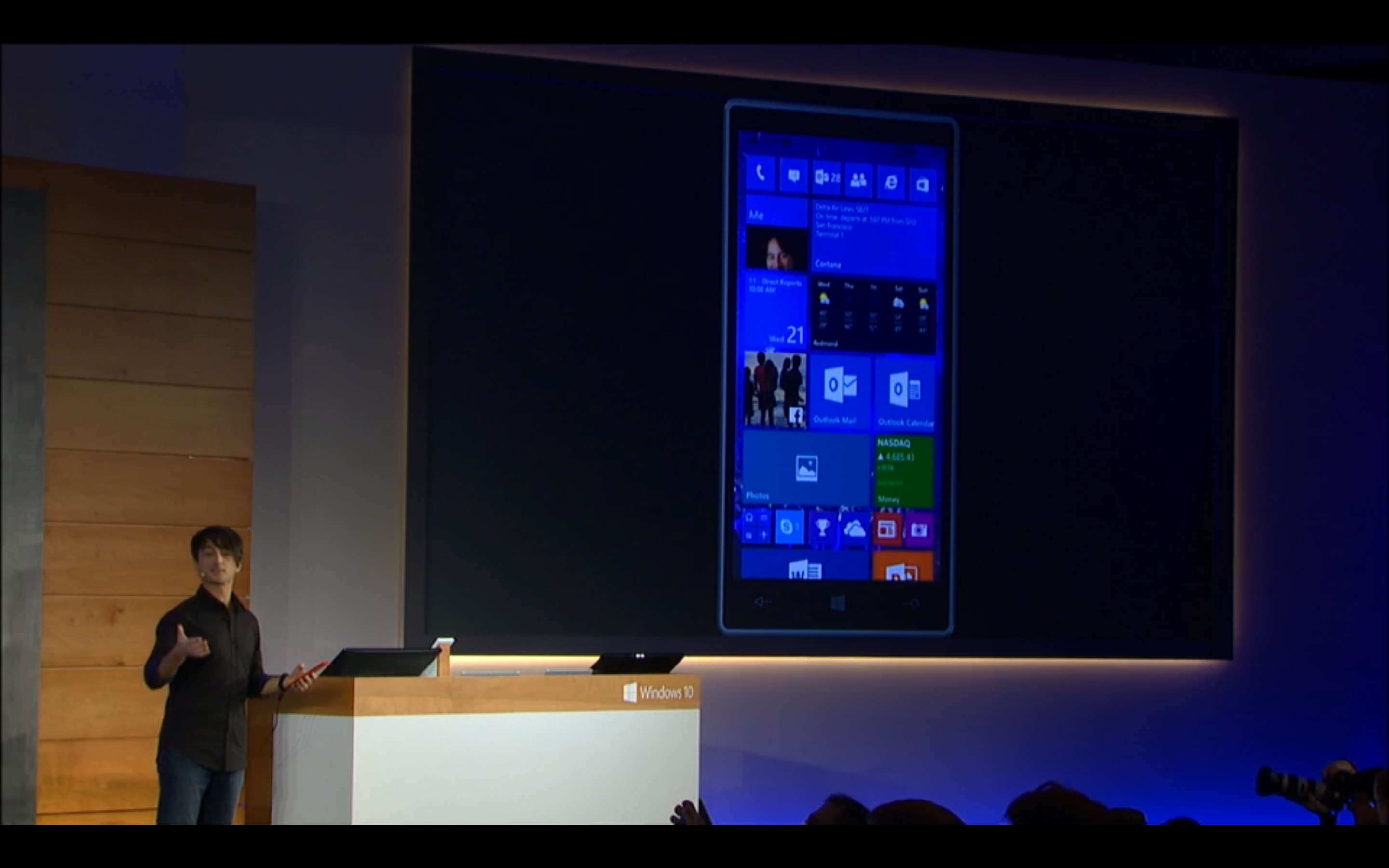 Microsoft’s Windows 10 event is well underway and, as predicted, the overarching theme of the event is the ease with which users can move from one device to the next, no matter what form factor, using the same version of Windows.

Microsoft’s first demo showed off the new Start menu on PC (using a Surface Pro 3) and then the new switcher that takes you from PC to tablet mode, a feature called Continuum. You can also now switch back to desktop mode on your tablet, and use a full version of “desktop” Windows 10 on your tablet. Pretty neat, especially if you’re making use of third party Bluetooth peripherals and not a first-party dock. 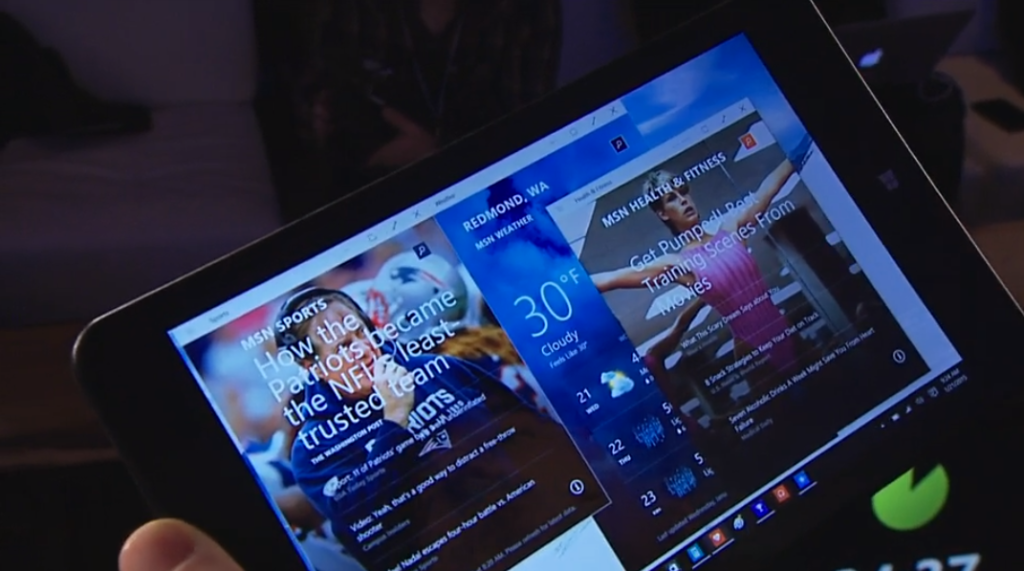 That experience applies to PCs, laptops and tablets larger than eight inches in size, but Microsoft also showed us how Windows 10 will work on small phones and tablets. The UI looks largely the same, so current Windows Phone users won’t be too shocked when Windows 10 is released. However, the functionality has been tweaked and expanded upon to better fit in with the desktop experience. 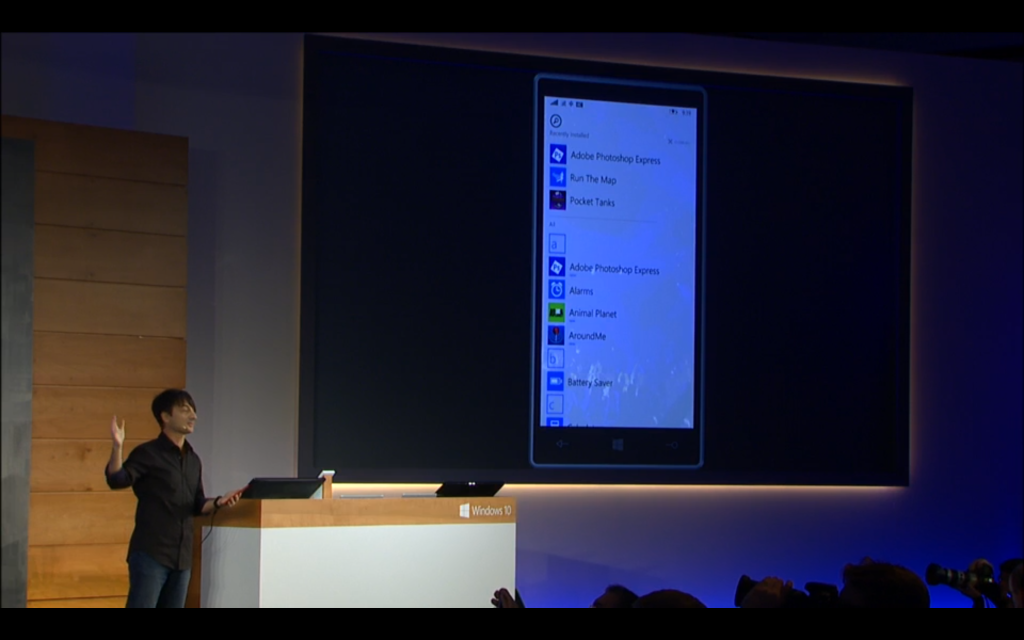 Windows 10 for phones and small tablet (which is what it was repeatedly called during the demo) also brings improvements to the keyboard and messaging. You can drag the keyboard around and reposition it on the screen (a sort of one-handed mode for larger phones) and Cortana facilitates dictated messages. 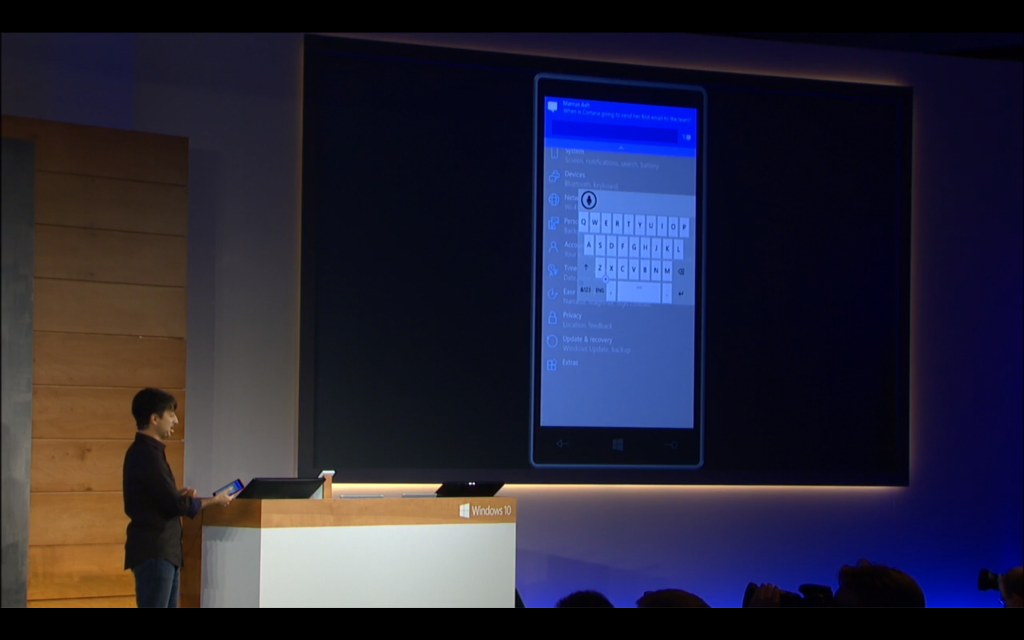 Microsoft has also introduced deeper Skype integration. Microsoft’s IP-based messaging detection efforts will allow Skype users on Windows Phone to use Skype to reply to messages if their phone detects that the sender also has Skype. Exactly like Apple’s iMessage. 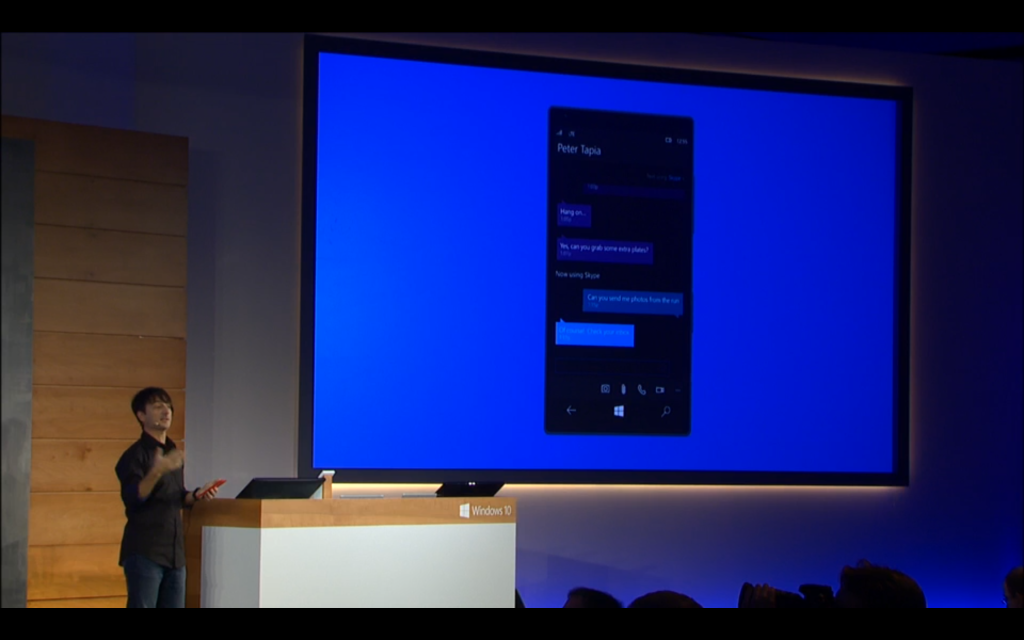 We also got a look at some universal apps. Microsoft’s Joe Belfiore showed off some Windows 10 apps, like Word and Powerpoint, which will be included with Windows 10 on small tablets and phones. The version of Word is very similar to the touch-version of Word that we’ve seen in the past. You can collaborate, edit, and share documents on the go. Belfiore says that this new version of Office, optimized for touch, will ship as part of the core mobile experience with Windows 10. 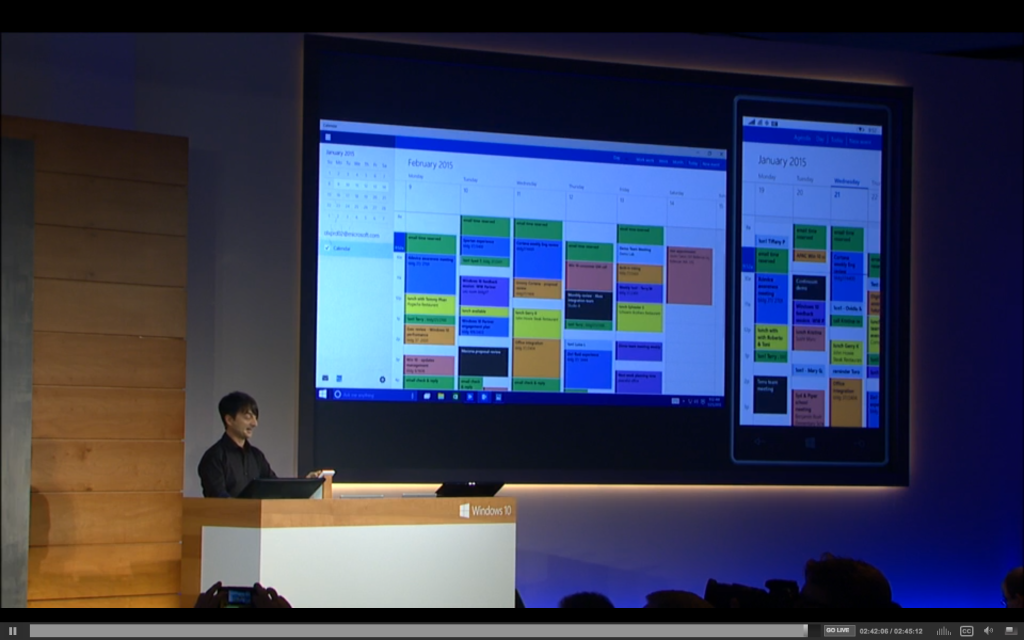 Photo fanatics will be pleased to hear that there is also some upgrades to the stock photo application, with tiles representing each photo in a never ending feed of thumbnails that’s organized by date.

Outlook brings some of the same UI and formatting functionality that exists in Word within the Office for iPad suite (and the new touch-optimized Office for Windows 10, I guess, since they’re so similar) and this experience is matched on the desktop version. Remember, these are universal apps, so the point is that they offer almost the same experience and the same functionality across all manner of Windows 10 devices.

Belfiore rushed through the universal app demos extremely quickly. Things like Calendar and People, which you’d expect to be synched, work across all devices, and Cortana, which arrives on desktop and in Maps with Windows 10, can now use Maps to tell you where you parked your car. OneDrive will also soon be able to host your entire music collection, so you can access it at any time and changes will be reflected across all devices. 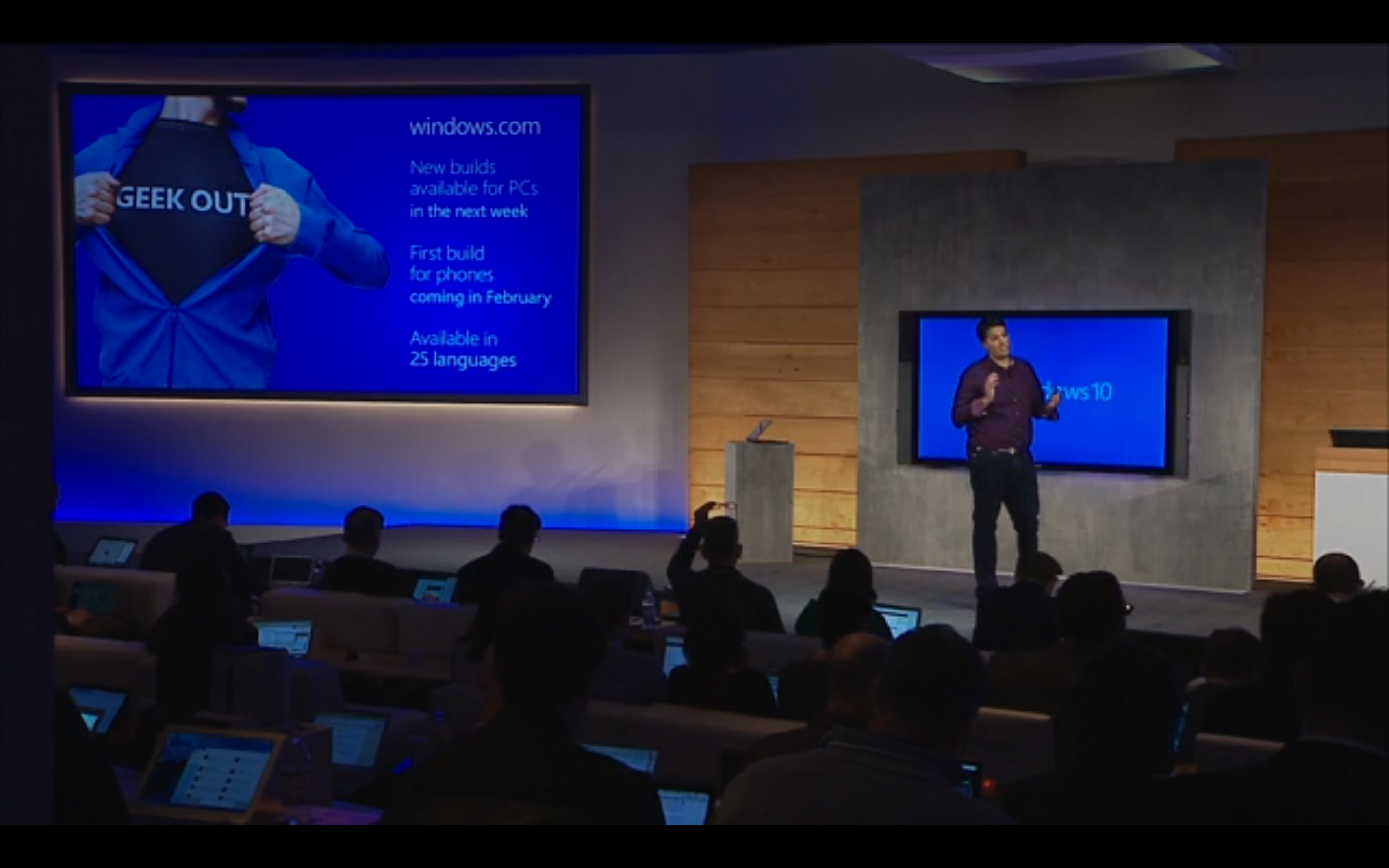 Windows 10 will be available beginning this week for PC Insider users, and will be coming to smartphones in February.