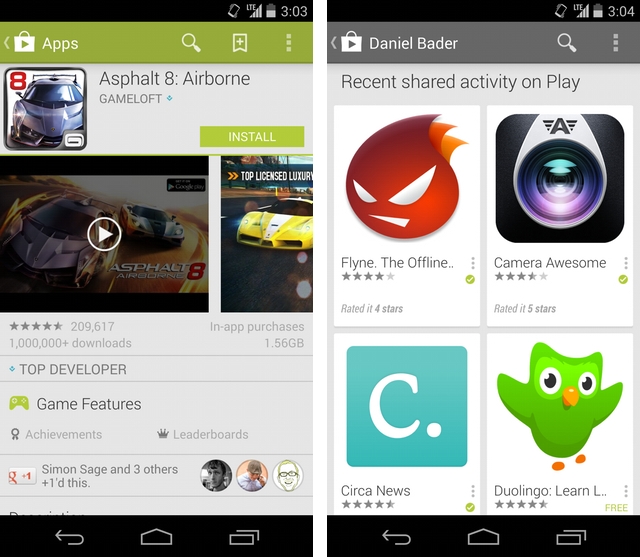 There’s a new version of the Google Play Store rolling out, and it boasts one important feature and two cool upgrades from the previous one.

Version 4.5.10 — a pretty big jump from 4.4.22 — introduces an in-app purchase (IAP) indicator, notifying users that the free (or, in some cases, paid) app they’re about to download will have further content available for purchase. While it doesn’t go as far as to break down the IAP’s themselves, as Apple’s App Store does, it’s a good start.

The review section has also been revamped, showing Google+ friends’ comments first, and further encouraging you to review often-used apps. As you’ll recall, Google integrated Google+ usernames into the Play Store’s review section earlier this year, and the design is now cleaner, with larger spaces between comments and the ability to edit previously-entered details with one tap.

Finally, there’s a new social activity feed, which can be accessed by tapping on your avatar in the left-side sliding menu. This menu briefly details all the +1s, reviews and recent downloads you’ve taken part in, which is yet another attempt to shoehorn Google+ into the Android ecosystem, whether we like it or not.

The update is rolling out as we speak, but if you want it sooner, Android Police has an APK to sideload.