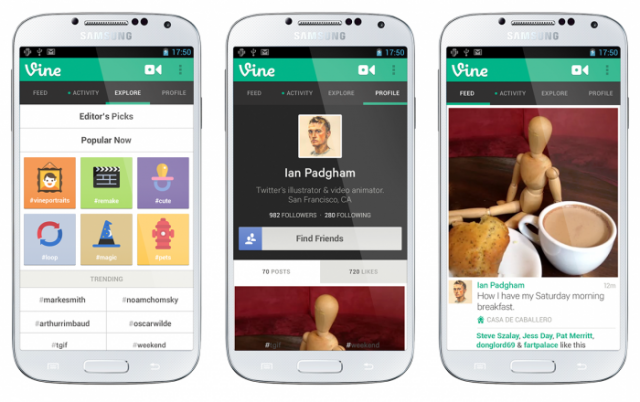 Vine for Android is now available for devices running Android 4.0 and above.

While the wait has been arduous for thousands of Android users accustomed to simulteanous app releases, but Twitter has finally released Vine for Android to the world. The six-second video social network has been the talk of the media and journalism circuit since its iPhone release in January, and an Android version was promised shortly thereafter.

The initial Android app is bare-bones: you can view the masterpieces from your stream of followers, upload your own six-second Vines, explore popular posts and Editors’ Choice clips, and share content to Twitter and Facebook. Unlike the iPhone version, however, you can’t tag users in posts, nor can you use hashtags. You also can’t engage the front-facing camera, something that was added to a previous iPhone release. There are also no push notifications in the first version, which will be disappointing to some users.

Android users do have one exclusive feature: zooming. Yay?

Mainly, though, Vine for Android is slow. Whereas the iPhone version renders video while you’re filming, the Android equivalent takes a long time to render after the fact. It takes over 30 seconds to render a six-second video. Twitter promises swift updates and improvements to the app, but it seems hard to believe that Vine for Android will ever render video as quickly as the iPhone version.