Minuum ends fundraising campaign with 873% of goal, on track for Android beta release in June (Video) 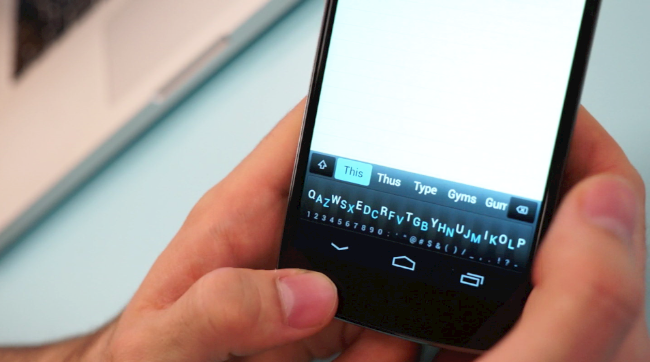 Tucked away in a nondescript room inside the University of Toronto’s Dynamic Graphics Project lab, Will Walmsley waves his arm spasmodically, silently speaking a language only he and a few others know.

Walmsley is the CEO and lead designer of Whirlscape, Inc., and has been studying alternate methods of language input for years. As he flicks his wrist, iPhone in hand, an on-screen metronome rocks back and forth on a MacBook, individual letters selected haphazardly, the barest indications of words turned into real, tangible English. It was using this “rotational typing” method, coupled with advanced prediction algorithms that Walmsley has been iterating on since 2010, that begat Minuum.

Though what we’ve seen so far of the one-dimensional keyboard has been conveyed on an Android device — Walmsley uses a Nexus 4 for the demo — its potential, the wearable development kit that will be announced later this year hints at the technology’s true potential.

“Minuum is not trying to replace the laptop keyboard,” he says. Instead, it’s meant to go where others can’t, on fabrics, digits, eyewear or places we haven’t thought of yet. In its current form, as an Android app that will be released to Indiegogo backers in June, it is meant to take up much less space than a typical smartphone keyboard. It does this by bunching a typical QWERTY layout onto one line, with visual spaces and slight height differences replacing the typical rows. Typing on Minuum is an amazing experience, simply because the software knows what word you’re trying to say, even if you only get a couple of letters correct. SwiftKey has found huge success with this idea on Android, but it’s more about predicting what you want to say next; Minuum also knows how to decipher your real-time garble.

Punctuation, symbols and numbers are all available, too, despite the minimal space; gestures are used to flick between states, while holding down on a letter will bring up its alternatives. Minuum doesn’t necessarily facilitate faster typing, though it’s possible to pick it up and become a pro, but its brilliance is in how much you can do with so little.

Typical keyboards assume that, despite a few mistakes, you’re going to attempt to type a word using mostly-correct letters in the precise order. Minuum understands that this isn’t possible on a single plane, and adapts to your typing style accordingly.

Minuum has the potential to change the world, not just because everyone types all the time but because we’ve trained ourselves to believe that these tiny virtual keyboards are the best way to communicate with others. When Walmsley is finished his crusade, Minuum could be the gateway to allowing able and disabled people alike to type wherever, and on whatever, they want.

Minuum ends its incredibly successful Indiegogo campaign with $87,369 and will begin sending out swag to its nearly 550 backers who paid $25 or more starting in May. The Android beta will arrive sometime in June for the 8000+ other backers, and more information on the wearable development kit will be here sometime later this year.