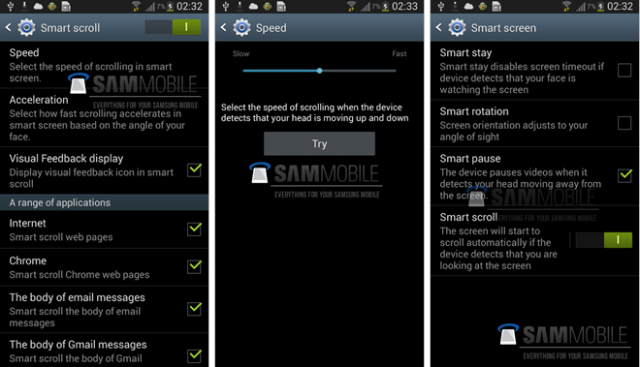 In what looks to be a fortunate misfortune, screenshots that were thought to be from the Galaxy S IV but aren’t have inadvertently confirmed certain features of the upcoming device anyway.

Screenshots from a leaked Galaxy S III ROM show off several rumoured features, one of which was reported by the New York Times this week: Smart Scroll. The Galaxy S IV, as well as its predecessor, will engage the front-facing camera to scroll up and down the page on “a range of applications,” like Chrome and Gmail.

The features also extend to something called “Smart Pause,” which pauses a video when your head moves away from the screen, though we feel like that feature could become more a nuisance than an advantage.

While we’re not sure what the interface will look on the Galaxy S IV, but we’d bet on it maintaining the overall visual approach of TouchWIZ, if not the same Nature UX that debuted on the GS3.