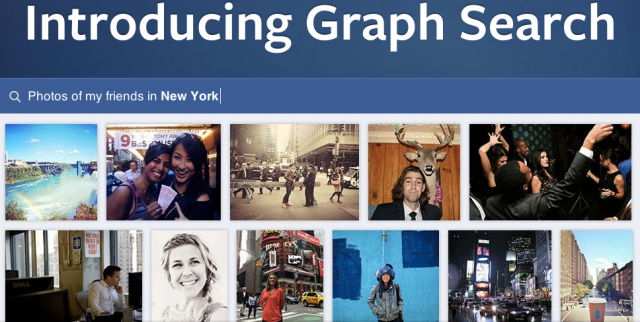 Today, Facebook announced a web-facing product that isn’t mobile, and the internet dropped to its knees. Graph Search is a way to find out about your friends’ likes semantically, and who your friends know that you should, too.

The lack of a mobile focus was curious, but not out of bounds for the slow-moving social giant. The company claimed that there have been over 240 billion-with-a-b photos uploaded to Facebook since its inception, and that it curates over a trillion connections. These numbers are astounding, but then again there are over one billion active users. Last check, Facebook had over half a billion mobile users.

Graph Search allows for semantic terms like, “Find me friends of friends who love Dan Brown novels,” or “How many friends live in Stockholm, Sweden?” There are so many potentially-interested facts to be found because users unwittingly and without much thought to the consequences post troves of data about themselves, often publicly. Graph Search means to consolidate it and make it reachable — and useful.

The potential for disruption is huge, though it’s not going to go beyond Facebook’s network, at least initially. But Facebook has also partnered with Bing, Microsoft’s ailing search engine, to provide results that are not discoverable on the Graph itself.

When this goes mobile — and it will — users will have yet another source of information to find great restaurants, hotels and other facts. The four tenets of Graph Search, People, Photos, Places and Interests, are perfect sources of data for taking on companies like Yelp, Flickr, LinkedIn and more. It wouldn’t be surprising to see Facebook launch its own Search app for mobile devices utilizing the power of Graph Search. Google has done just this with its Local Search feature, and Facebook’s attempt to take on the search giant may just knock it down a few pegs.

Of course, the results are only as good as the data available, and it’s yet to be seen how privacy scares, both past and present, will affect users’ willingness to share all this data. “Friends of friends who like Android” will only return results if those friends of friends have allowed their data to be shared with you. Graph Search will be great for self-promotion, but there’s no such thing as Facebook SEO just yet.

Many analysts were expecting a Facebook phone to be announced at today’s event. Sadly, or perhaps mercifully, nothing of the sort emerged. But Graph Search lays the bricks for a future mobile platform where all search results are kept internal. Siri did it for Apple, getting it around its heavy reliance on Google, and Facebook stands to do even better, with more users in higher market share than any other social graph.

A year from now things may look very different in the mobile space as a result of Graph Search. Or not — nothing’s ever certain in this industry.