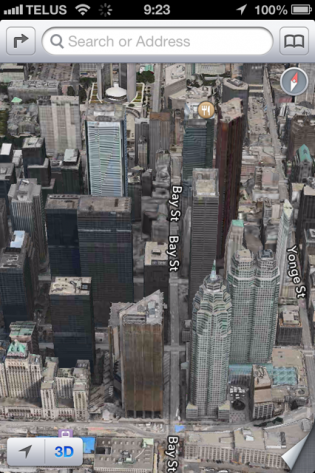 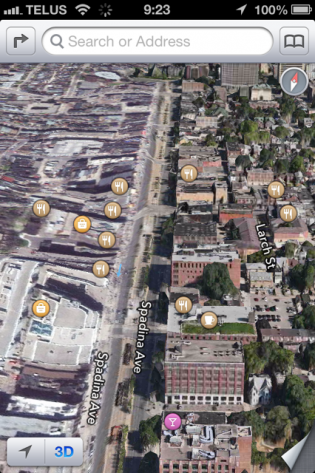 The upcoming iOS 6 update will bring 3D Maps to the iPhone 4S, iPad 2 and new iPad (as well as any upcoming Apple devices). This in itself is pretty exciting, but Canadians were wondering whether their biggest cities would be included in the retinue.

In the latest iOS 6 beta, Apple has added parts of Toronto to the list. While the changelog lists Toronto in its entirety, after making a few virtual trips through our fair city it seems that the 3D maps border Davenport/Dupont in the North, Spadina in the West, Parliament in the East and, well, Lake Ontario in the South.

As you can see from the above image, the contrast between the 3D images and the existing satellite images is very stark, and quite breathtaking. The ability to rotate the map on a full axis as well as zoom in enough to see individual windows on the skyscrapers is remarkable. We look forward to seeing the difference in renderings once Google adds Canadian cities to its own 3D maps software on Android.

Expect the full city of Toronto, as well as larger metro areas like Vancouver, Calgary and Montreal, before the final version of iOS 6 is released this fall. Other cities added to 3D Maps in iOS 6 are: