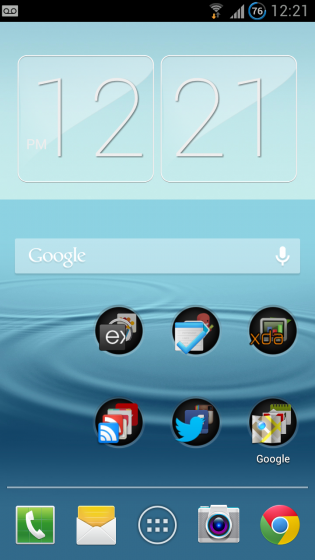 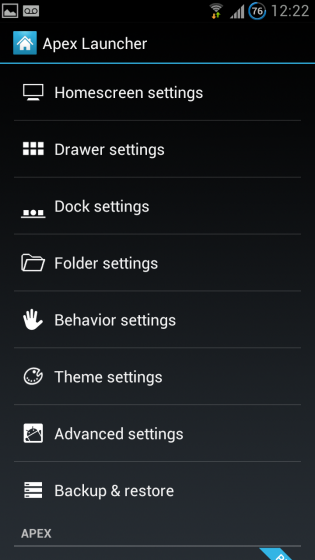 A new beta version of Apex Launcher for Android brings many features from Jelly Bean to Ice Cream Sandwich devices. The new code, based on the official launcher from the Android Open Source Project, allows users to displace icons and widgets by moving them atop one another, as well as remove icons from the screen by “flinging” them off the map.

All told, the features put the launcher ahead of Nova, which is its biggest challenger in the Android 4.0+ game. I also noticed that, perhaps due to “Project Butter” enhancements, scrolling through various home screens is slightly smoother than Nova.

Due to the Nexus 7 being a part of AOSP, Apex now adds a native 7-inch tablet layout to the mix. This overrides the stock launcher, so if you’re running it on a 7-inch Acer A100, for example, it will make the device look a bit more like the Nexus 7 (and less like Honeycomb).

If you’re already using Apex Launcher, head into Settings and About, and change Automatically check for updates to “Beta version.”

Head to Google Play to download Apex Launcher, which is free with a optional $3.99 Pro Version for extra features.

A full changelog is below:

– When placing widgets on the screen, everything else automatically moves to make room
– When they are too big, widgets resize on their own to fit on the homescreen
– Quickly remove apps/widgets by flinging them to the edge of the homescreen
– Major performance boost for homescreen and drawer
– New app enter/exit animations (JB only)
– Switched to phone layout on 7″ tablets (e.g., Nexus 7)
– Added background for widgets in the drawer
– Fixed icon ordering bug within folders