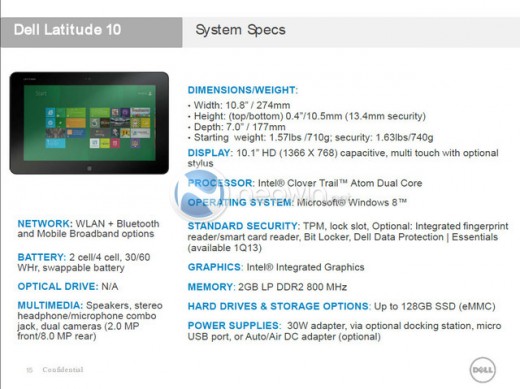 The Windows 8 tablet market is something we haven’t really touched on since the hardware isn’t there yet to be considered “mobile,” but reference designs are coming fast and furious.

The specs for Dell’s first Windows 8 tablet, the Latitude 10, have been leaked and, like most of its contemporaries, it will run an x86-based Intel Clover Trail processor with integrated graphics. The tablet will also come with 2GB DDR2 RAM and SSD storage up to 128GB.

Unlike ARM-based SoCs which is relatively battery-friendly, x86 processors have traditionally been larger and more power-hungry. The Clover Trail chipset is a dual-core solution built on a 32nm process, and is said to be the first mobile-friendly SoC from Intel. In fact, a single-core variant is used in Lenovo’s Medfield Android devices.

Dell has managed to keep the tablet’s thickness to just over 10mm, though its 1.57lb weight will be an issue for some users. In addition to WiFi, GPS, integrated fingerprint reader, there will be an optional SIM card slot on the device, likely unlocked, so businesses can outfit their employees with on-the-go broadband.

It’s not known whether Dell will dabble in then ARM-based Windows RT configuration, but those models, despite an early disadvantage due to app incompatibility, are expected to be the main iPad competitors when they’re released later this year.

The main issue with the Latitude 10, bedecked with such intimidating specs