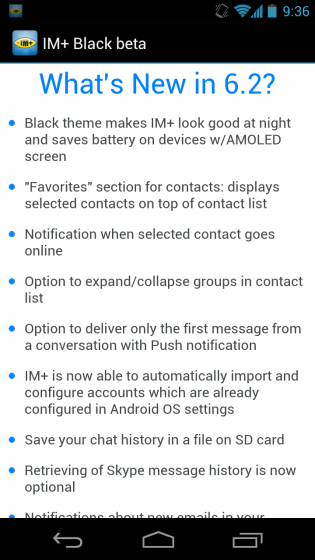 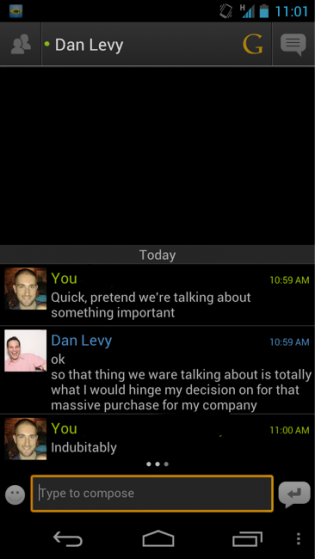 IM+ for Android has always been a pretty reliable app, and with a new public beta the company is trying to appeal to those millions of users with AMOLED displays. Called IM+ Black Beta, the new version comes standard with a black theme destined to help improve battery life on the many Samsung AMOLED devices on the market.

You can also set certain contacts as ‘Favourites,’ a long-standing requested feature from the company. SHAPE, who became famous selling BlackBerry apps, has been rapidly expanding its mobile offerings with iOS and Android apps; while I prefer Google’s own Talk app on Android, it has become an indispensable tool for me on the iPhone. The app supports Facebook, Gmail, Skype and many other popular IM services.

The upcoming Android version 6.2 improves upon a lot of the app’s shortcomings, such as adding swipe gestures between screens and tweak the occurrence of push notifications. The app stays open behind the scenes when in the background, incorporating a mix of Google’s push C2DM service and toast notifications. It’s a great concept that, previously, used a lot of battery life, but the company has ensured that improvements have been made on that front as well.

The beta is available for free and use all the features for a limited time. There is a free ad-supported version, and a separate $4.99 Pro version on Google Play.