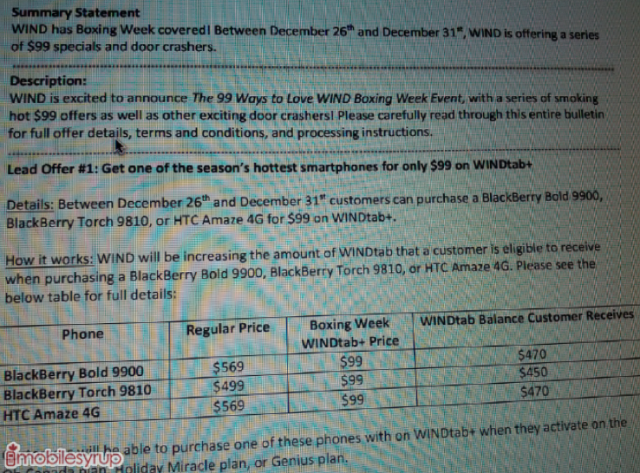 Over the next few days all the carriers and retailers will be husting it out and offering up some last minute deals before the year ends. We’ve now been sent WIND Mobile’s upcoming Boxing Day special, which are titled “99 Ways to Love WIND”. The focus is clearly on the $99 number and everything is effective December 26th-31st, 2011. In total there are 3 “lead offers” and a couple “door crashers”… here they are:

– Lead Offer #1: Get one of the season’s hottest smartphones for only $99 on WINDtab+: BlackBerry Bold 9900, BlackBerry Torch 9810 and HTC Amaze 4G. The fine print from the internal doc states that “Customers will be able to purchase one of these phones with on WINDtab+ when they activate on the Oh Canada plan, Holiday Miracle plan, or Genius plan” – this also means that the Holiday Miracle plan will be extended to the end of the month.

– Lead Offer #3: Get one year of data plus a WINDspeed Mobile Internet Stick for only $99: The data stick is the E169 and the data plan is the 12 months of the 1GB/month Mobile Internet plan.

– Door Crasher #1: Get a BlackBerry Playbook 32GB for $99 when you activate any Blackberry: This is only available on December 26th and select locations (listed in the internal doc below), plus you have to purchase a new BlackBerry Bold 9900, BlackBerry Torch 9810, or BlackBerry Curve 9360 on a monthly plan of $25/month or greater. Also, there will only be 5 32GB PlayBooks at each location.

– Door Crasher #2: Get a free gift with the purchase of a Google Nexus S or LG Optimus 2X: Yawn. When you buy either of these devices and sign up on a $25 or higher plan you’ll score a free LG HDMI cable. 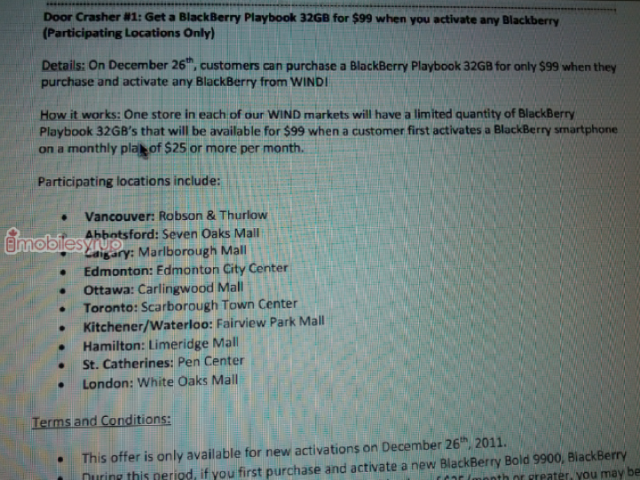