Wind CEO talks about how bad incumbents Customer Service is 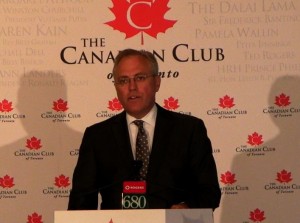 Today at the Canadian Club of Canada WIND Mobile CEO Ken Campbell took the podium with a speech titled “Changing the Landscape of Wireless in Canada”. It was all the incidents we’ve witnessed over the past few months with the CRTC denying them then overturned by Industry Minister Tony Clement. Building their brand and how the company is built on the trust of the Canadian people and the slogan “The Power of Conversation”.

There’s no word on exactly how many people have signed up… but WIND now operated in Toronto, Calgary, Edmonton, Vancouver and Ottawa. The most interesting part of the speech was about customer service. We all know that this topic is a hot one and all organizations spend millions a year to keep customers happy. Recently the Globe wrote an article that stated “An average service call costs a wireless company $5 to $12 to handle, while the fee for a complicated, lengthy call can soar to $30 or more”. In the Canadian wireless industry Videotron has the highest rate with a 97% overall and 99% customer satisfaction rate. Even CEO Robert Dépatie boasted about his organization by saying it’s “Almost perfection”.

There’s been some talk of Rogers creating something called a customer “Bill of Rights”, but nothing has surfaced yet. Campbell said today that “The incumbents were doing such a good job of doing such a bad job at customer service, that the market seemed ripe for a player that could capitalize on the dissatisfaction by offering a remarkable alternative.”