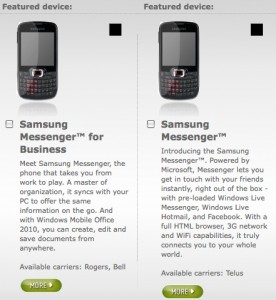 The Samsung Messenger was recently released by both Rogers and Bell… we mentioned it before but can now confirm that TELUS will be bringing the Messenger also.

No official launch date but we’ve been informed that it’ll be in July. What’s a bit unique about with TELUS vs. the others is that it’s being labeled by Samsung as a “Consumer” device, while the Bell and Rogers model has the “Business” stamp… same specs. However, it’s coming and it has Windows 6.5 plus a full QWERTY keyboard.

UPDATE: After posting this we got a call that said the Samsung Messenger was not going to be launched by TELUS, it was an error on their website.

Check it out here at Samsung