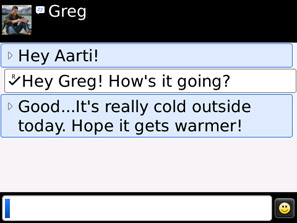 If you were feeling the pain of the Berry outage yesterday you weren’t alone. It seems that the issue has been located to previous versions of BlackBerry Messenger (so make sure you upgrade to the newest version 5.0.0.57  (here by visiting blackberry.com/messenger or via your device at the App World):

“A service interruption occurred Tuesday that affected BlackBerry customers in the Americas. Message delivery was delayed or intermittent during the service interruption. Phone service and SMS services on BlackBerry smartphones were unaffected. Root cause is currently under review, but based on preliminary analysis, it currently appears that the issue stemmed from a flaw in two recently released versions of BlackBerry Messenger (versions 5.0.0.55 and 5.0.0.56) that caused an unanticipated database issue within the BlackBerry infrastructure. RIM has taken corrective action to restore service.

RIM has also provided a new version of BlackBerry Messenger (version 5.0.0.57) and is encouraging anyone who downloaded or upgraded BlackBerry Messenger since December 14th to upgrade to this latest version which resolves the issue. RIM continues to monitor its systems to maintain normal service levels and apologizes for any inconvenience to customers.”