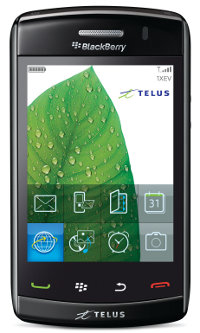 The 3-year $199.99 contract TELUS states is “Available until December 31, 2009, for clients (new activations) who activate on a 3 year term with a Smartphone voice and data rate plan of $50 or greater.”

TELUS describes the Storm2 9550 as “You don’t have to sacrifice functionality for entertainment with the BlackBerry Storm2 9550 smartphone. Quickly and easily message your friends with the enhanced virtual keyboard on the high resolution clickable touchscreen.”

Quick specs on this are that’s part of their CDMA network and like all BalckBerry devices can do your e-mail, contacts calendar. The Storm2 has a 3.25 inch touchscreen with RIM’s new and improved SurePress technology and has a resolution of 480 x 360. The overall dimensions are 112.5 x 62 x 13.9 mm and weighs in at 10 grams. This also has a 3.2 megapixel camera with auto-focus, flash and can take videos. TELUS ships this with 16GB microSD card! Other features are the addition of WiFi, increased memory and GPS.