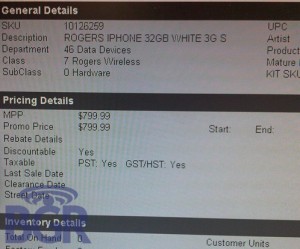 However, there will be a non-contract iPhone 3Gs available and thanks to BGR it looks like it’ll be on the following prices according to a screenshot from Best Buy inventory: $799.99 for the 32GB version and $699.99 for the 16GB version. Wowzers. Ready to go off contract or will you default to the iPhone 3G?