OpenSignal released a report detailing the state of Canada’s rural mobile networks. Not only have speeds significantly increased for rural users, but OpenSignal says rural Canadians have access to some of the fastest download speeds as well as to 4G networks almost 90 percent of the time.

OpenSignal analyzed data of users on the three nationwide mobile carriers, Bell, Telus and Rogers. Specifically, OpenSignal wanted to see how rural mobile network experiences differed from urban users. To do so, it examined download speeds and 4G availability during the first quarter of 2020 and compared it to Q1 of 2019.

At a country level, Canada saw a 40.1 percent increase in ‘download speed experiences’ in the past year. For rural users on Telus, download speeds jumped 70.7 percent in the first quarter of 2020 while Bell subscribers saw a 53.2 percent speed jump during the same period.

OpenSignal says it classified Canada’s territory using the definition of population center (PC) as defined by the national statistics office. Further, the statistics office defines all areas outside of a PC as rural areas. Statistics Canada classifies PCs by three types:

Further, OpenSignal notes that Canada had just started taking preventative measures to combat COVID-19 during its analysis. However, most of its analysis took place before provinces declared states of emergency and closures in mid-March.

Large PCs have the overall fastest average download speeds with Telus subscribers seeing the fastest speeds at 99.9Mbps. Telus also saw the biggest increase in speed in medium PCs from 57.3Mbps in 2019 to 83.3Mbps in 2020.

Rural Canadians have better download speeds than other countries

It says that users in Germany, France, the U.S., Italy and the U.K. have speeds all below 30Mbps. Bell, Rogers and Telus customers in rural Canada are all between 20 and 110 percent faster.

Finally, OpenSignal notes that among the G7, only Japan saw a higher speed than some rural Canadians. 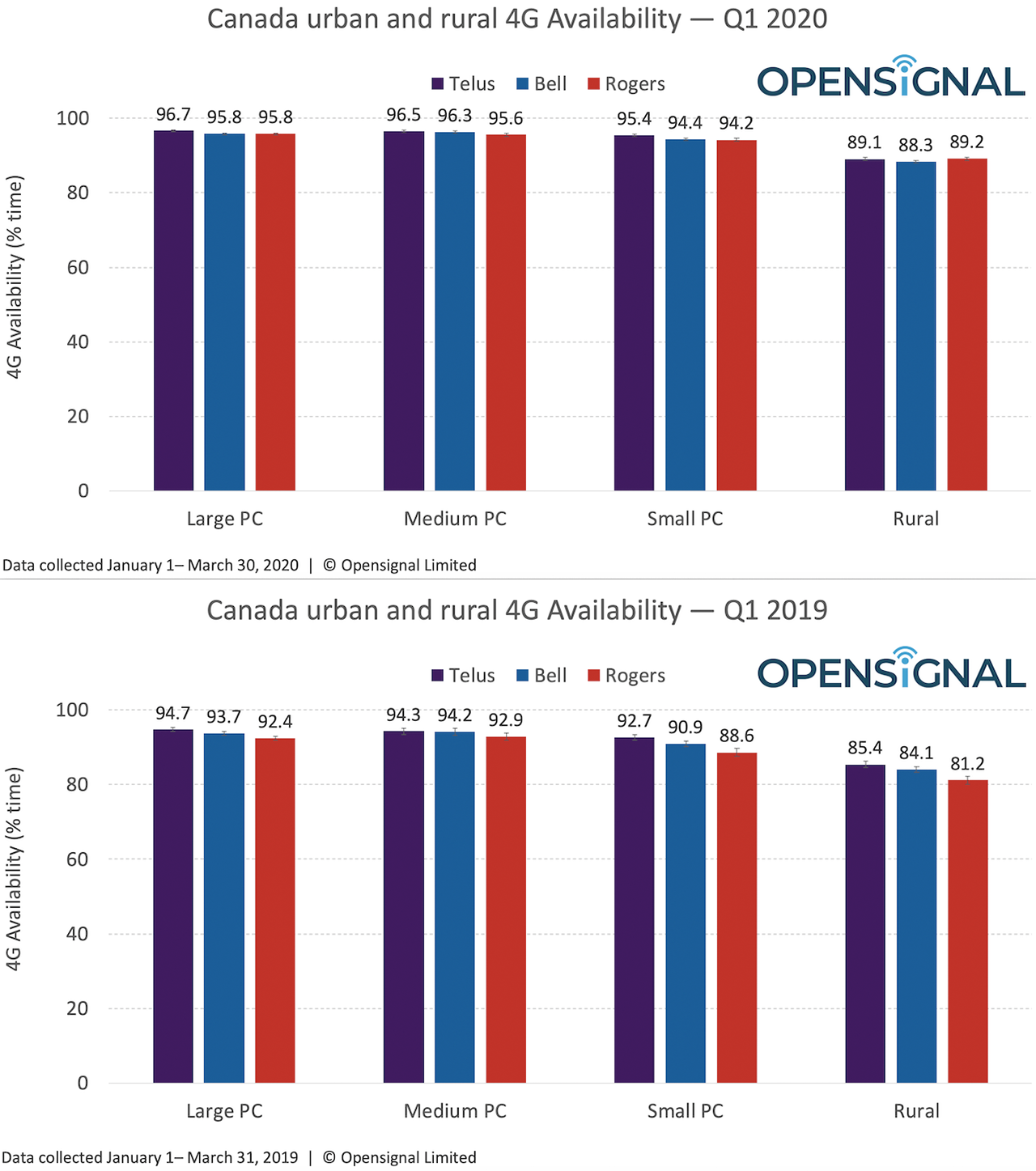 OpenSignal’s data shows that in the past year, rural Canadians have gained improved access to 4G networks. Rogers’ network saw the biggest improvement with a score of 89.2 percent availability, up eight points from the same time last year.

OpenSignal points out that Bell interestingly offers higher 4G availability for medium PCs than large PCs at 96.3 and 95.8 percent respectively.

Despite the improvements, OpenSignal says that rural Canadians still have significantly lower access to 4G than those in more populated areas of Canada.

Those curious can view the full report for themselves on OpenSignal’s website.