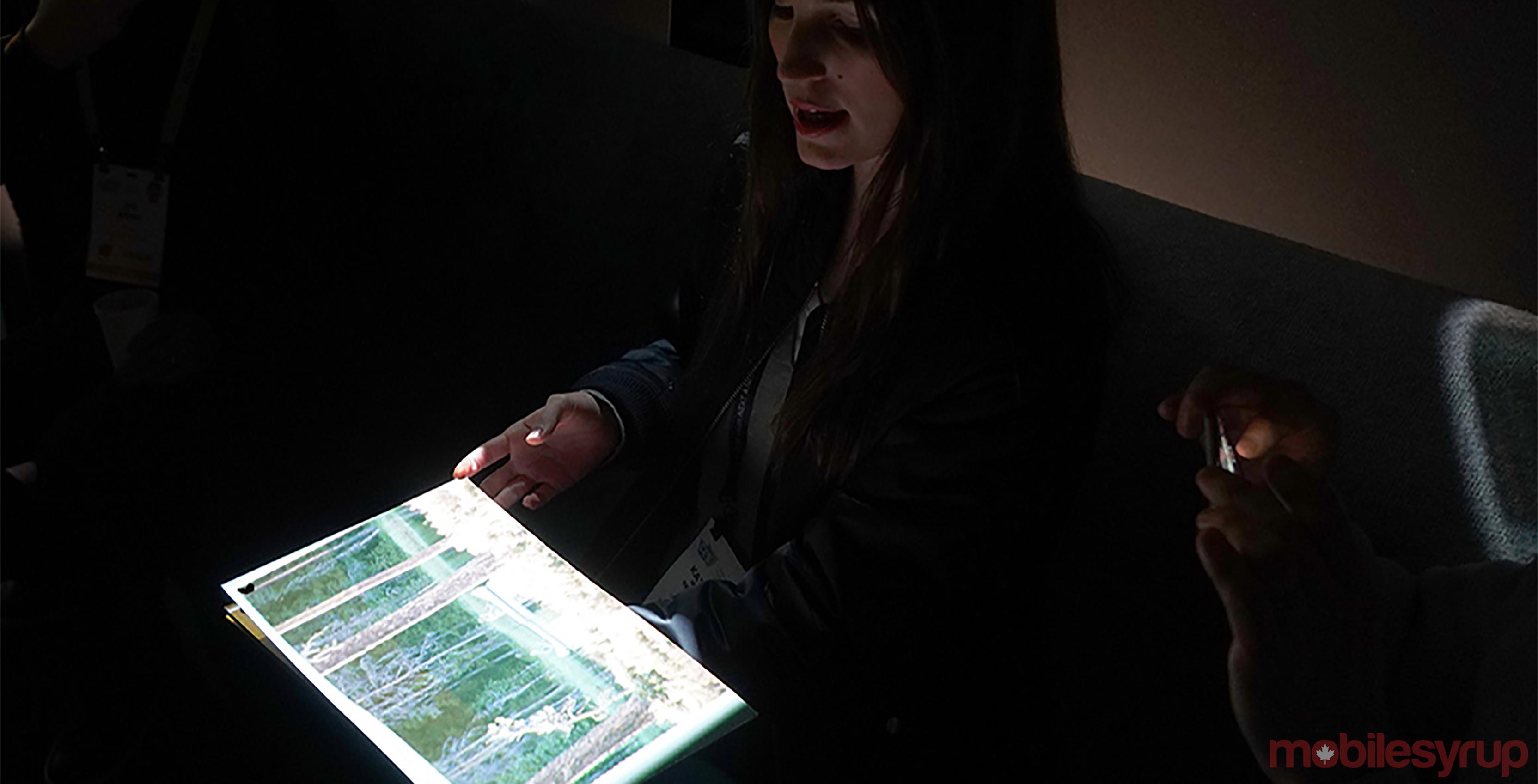 Now that CES 2019 is in the books, it’s a good time to look at some of the interesting and unusual gadgets or concepts from the show floor.

I won’t even include the Furrion Adonis smart yacht and its reported $5 million price tag, whose sight was a first for CES. I’ve seen small boats before to show off marine audio, but never a monster like that thing in a booth. 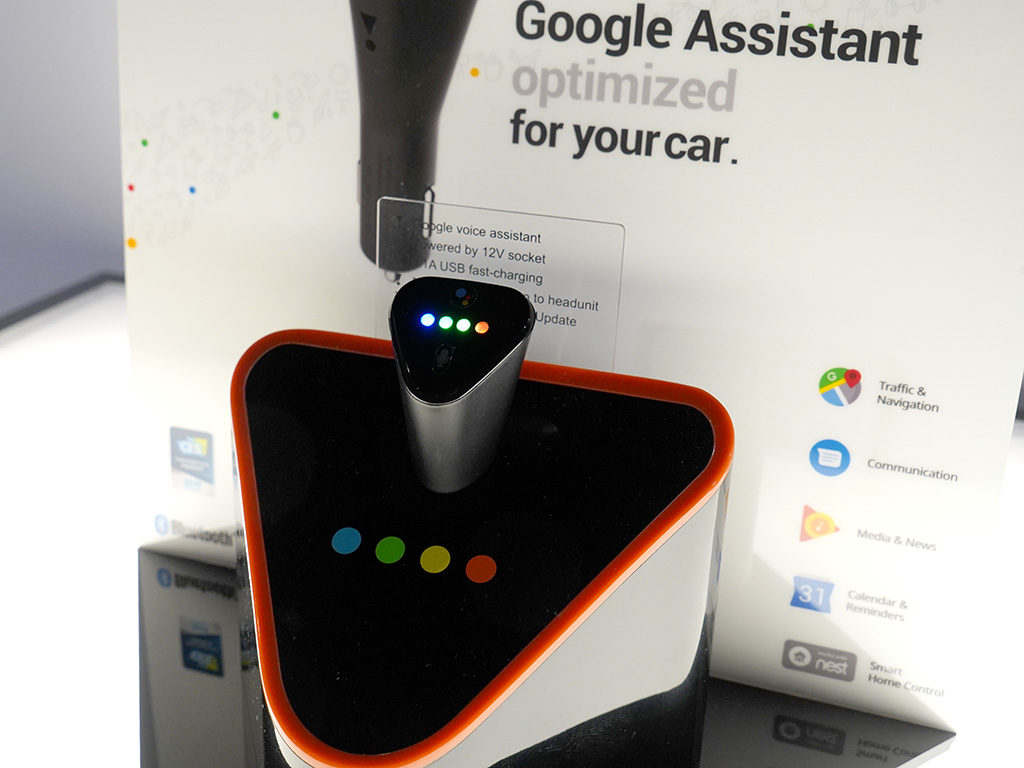 Automotive tech continues to drive (pardon the pun) innovation at the show every year, and much of what the automakers put out is highly conceptual. Other times, there are technologies and features ready to roll, both from OEMs and aftermarket manufacturers or developers.

This list isn’t exhaustive, but it captures some of the array of car tech running the gamut in Las Vegas this year.

As much noise as there is about what newer cars will do, retrofitting everything else is still on the table. JBL’s Link Drive is a small module that plugs into the 12-volt socket and brings Google Assistant into the cabin. A noise-cancelling microphone is better able to capture commands than using a smartphone, say JBL reps. 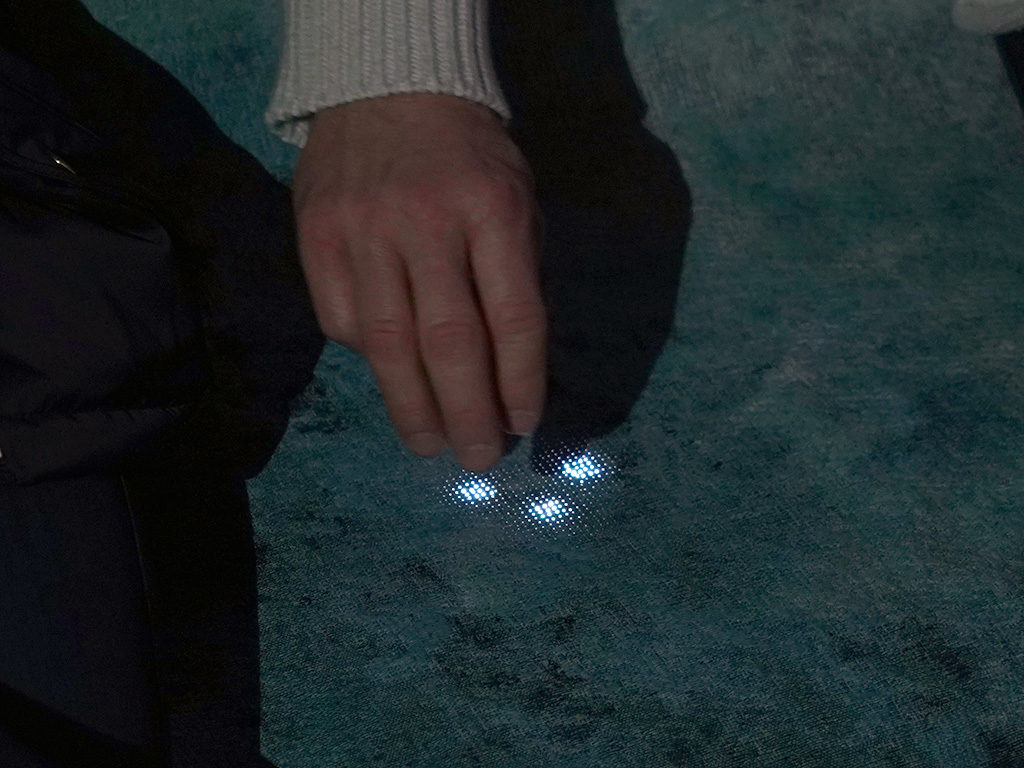 It connects to your phone via Bluetooth to pass through to the car’s speakers, but also includes an Aux-In jack for wired setups, too. In lieu of using your voice to trigger it, the top doubles as a button to wake it into action. Not surprisingly, JBL outfitted it with the familiar four LEDs to mirror the way Google Home devices look when listening to or processing commands.

JBL didn’t skimp out on charging by including a 2.4-amp USB port to plug in a phone or tablet to charge. There was no real demo to test it, but it should be coming to market in the first half of the year for $60 U.S., so likely close to $80 when it crosses the border.

Firmly planted in the conceptual stage, this combination of features is only part of what BMW envisions for the future of driving through its Vision iNext concept car.

Intelligent Beam hides touch-sensitive controls under the fabric of the car seat, where LEDs light up like sparkles with each swipe. Passengers can control audio playback with swipes to skip or repeat tracks, raise or lower volume, and play or pause. The demo had it working in specific sections of a backseat scenario, but the technology could be deployed anywhere. 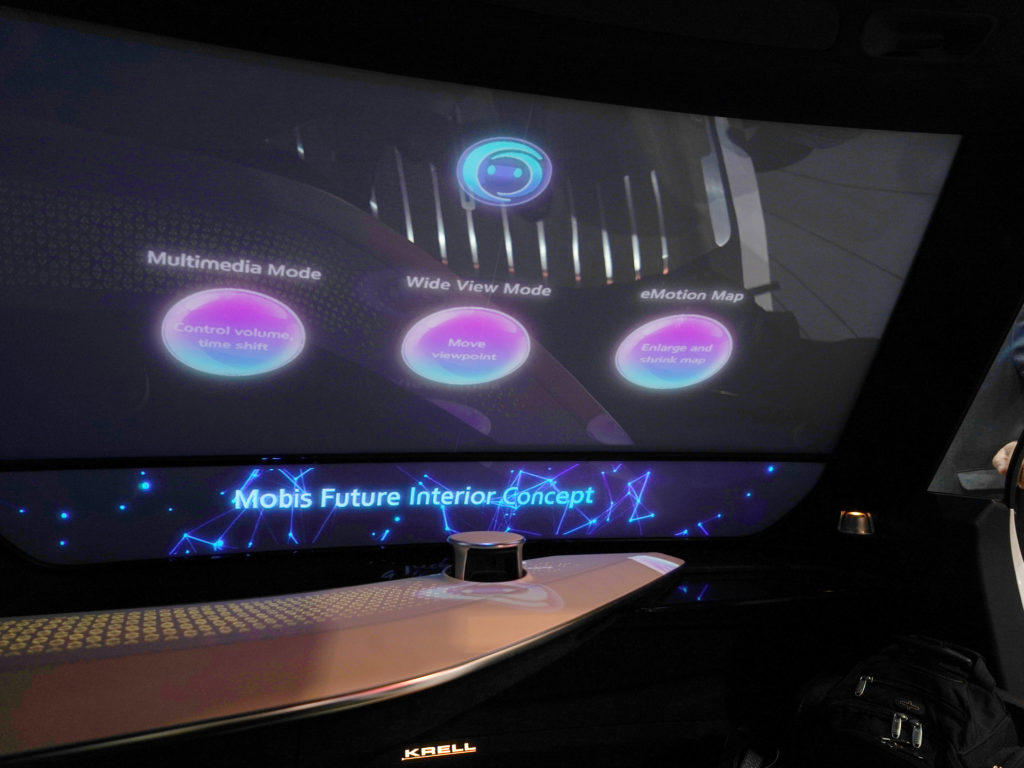 The second part is a roof projector that beams content on a blank slate held by the passenger. Depending on what you’re holding and what size it is, the projector adjusts automatically. It can change the size or the content entirely on the fly. The demo I saw was like turning a booklet into a tablet for video or an eReader for books. It was cool and weird all at once.

If CES has been any indication the last couple of years, windows may soon double as screens in vehicles. Hyundai’s Mobis concept of an interactive windshield was first shown last year, but it wasn’t as interactive as this one was.

Sitting in it myself, I used gestures to control various aspects of the screen, making selections with a point and doing circling routines to fast-forward a video or reorient a 360-degree image. I then played a somewhat bizarre game where I competed with a passenger for points by doing various facial expressions. 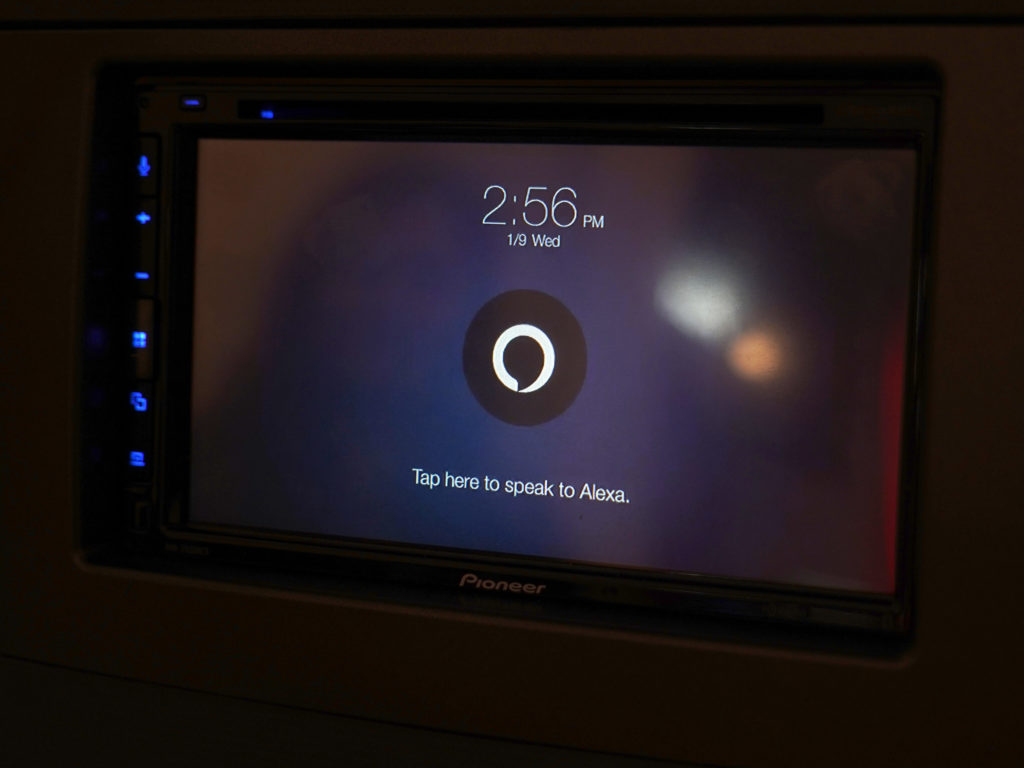 What Hyundai was showing was the concept of an autonomous vehicle where passengers can entertain themselves or get work done in the cabin. The car can just drive, taking care of the road, while eye-tracking cameras and full window displays keep everyone occupied. Don’t expect this anytime soon, though. It needs full Level 5 autonomy and plenty of power. The system needed to cool down after every 10-minute demo.

Pioneer was the first vendor to bring Apple CarPlay and Android Auto to aftermarket head units, and now it’s adding Alexa to the list. No less than a handful of new models coming this year will get the integration, ranging in price from a few hundred dollars to over a thousand.

I got to test this out on the show floor, and the integration is impressive, but there are a couple of caveats off the bat. First, the integration isn’t backward compatible. If you already have a Pioneer head unit, you won’t be able to get the feature. Second, it requires that the phone be plugged in via USB. That latter point is fine, except that it clashes with the fact both CarPlay and Android Auto can work wirelessly with all these new head units. 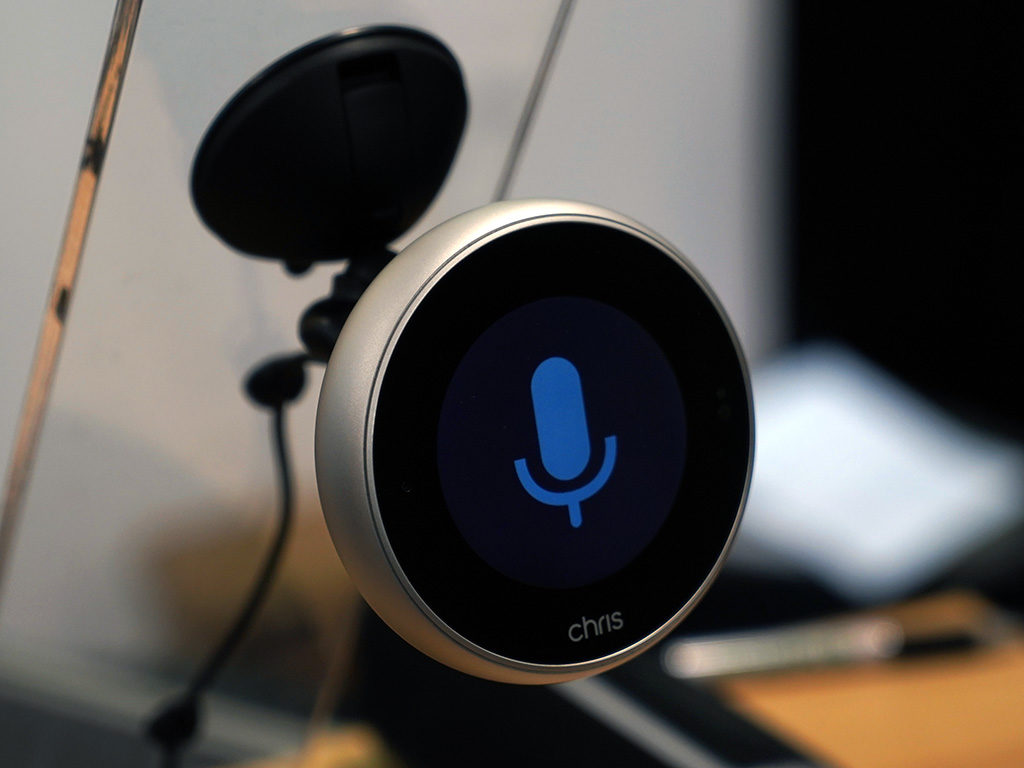 Why the wired setup? Because the Alexa part runs through something called WebLink, a software tool that helps bridge everything together. Unless WebLink figures out a way to do this wirelessly, Alexa can only pipe up when using a cable.

This was an interesting marriage of online and offline integration. Chris is also a pretty basic name, but part of the reason is that it has its own onboard voice activation platform. It’s also built-in and stored on the device itself, so you don’t need a data connection to use it all the time. Even the navigation maps are stored inside, so turn-by-turn directions don’t use data, either.

Rather than a touchscreen, Chris works through gestures. Calls, messages and music all run through it, and using Bluetooth, you can pass through its own audio through the car’s speakers. One of the next steps is to index Spotify’s library to allow Chris to recognize tracks, artists, albums and playlists. That will probably be limited to indexing only the music a user has saved, like created playlists, rather than the tens of millions of songs Spotify currently holds.

Chris is currently only available in Europe, but this may be the year it crosses the pond and hits North America. Its 250 Euro price tag isn’t cheap, but there are no subscription fees.

This Montreal-based startup is looking to make finding parking spaces more efficient by knowing what’s open in real-time. Rumbo claims it can save drivers an average of 15 minutes searching for a spot. Cities would need to be involved in this because it uses parking posts on streets and parking lots to communicate with the app on drivers’ phones via the cloud. Rumbo says it’s been “in talks” with various large cities in North America to pilot and implement the technology.

It’s early days still, but with parking being harder to find in some cities, any way to avoid roaming and circling around to find one is worth trying.