Waze and Ford Sync 3 Review: Too late to arrive? 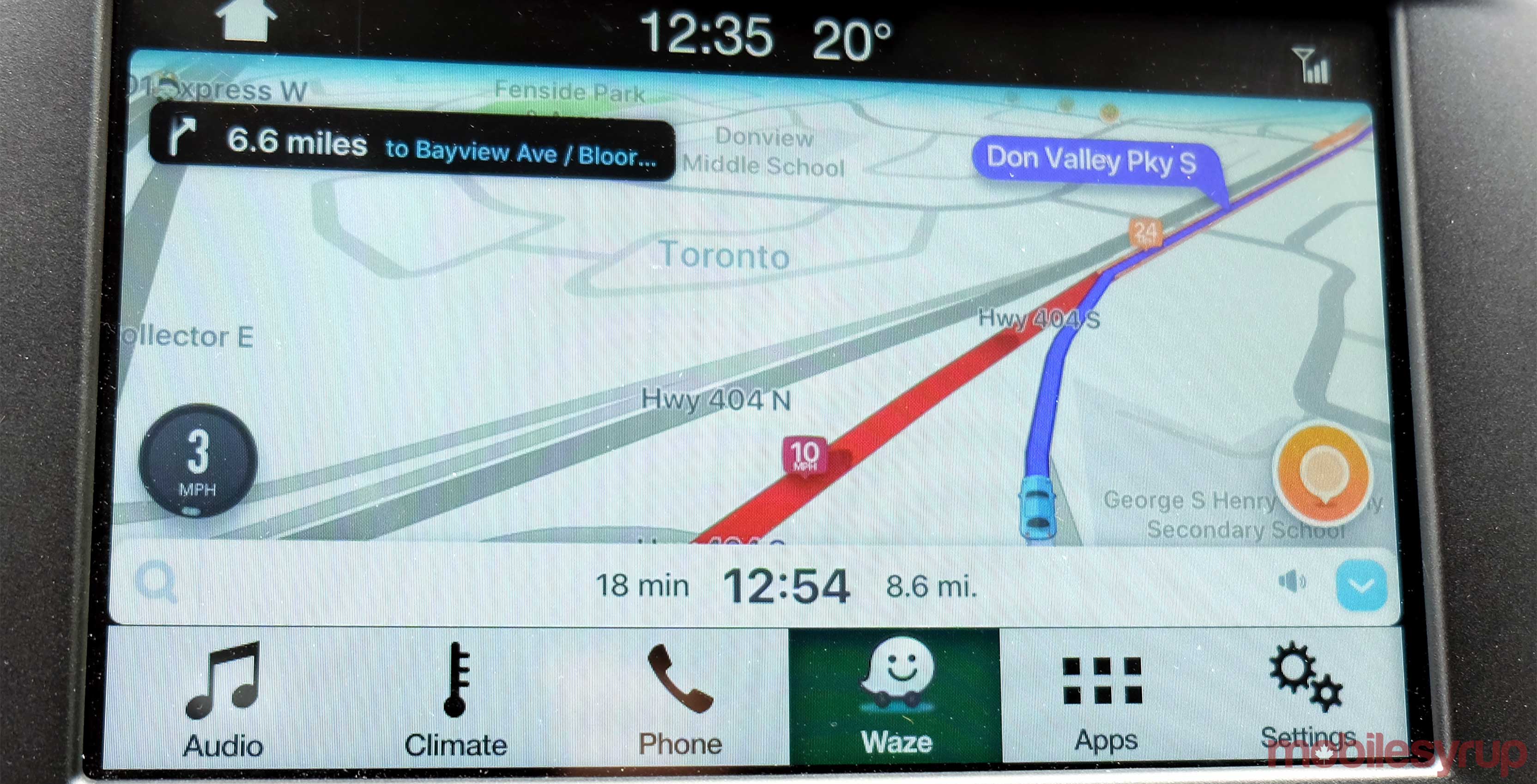 Built-in navigation packages have long been a cash cow for automakers and the dealerships they support, but no matter what they offer, the market is looking elsewhere. Waze’s integration into Ford Sync could be a big first step toward making them all but obsolete.

This integration isn’t the one already possible through Android Auto, nor is it the one that Apple announced as part of CarPlay and the upcoming iOS 12 rollout. It’s the iOS integration Ford had previously intimated at Mobile World Congress (MWC) last year.

At the time, it was made for SmartDeviceLink, the consortium headed by Ford and Toyota as an automotive-driven platform for better mobile integration. Now it’s live and part of Ford’s AppLink in-car infotainment suite of services.

For drivers who love crowdsourced mapping on the road, having Waze integrated is a major addition. Its success could pave the way for more of this from other automakers. 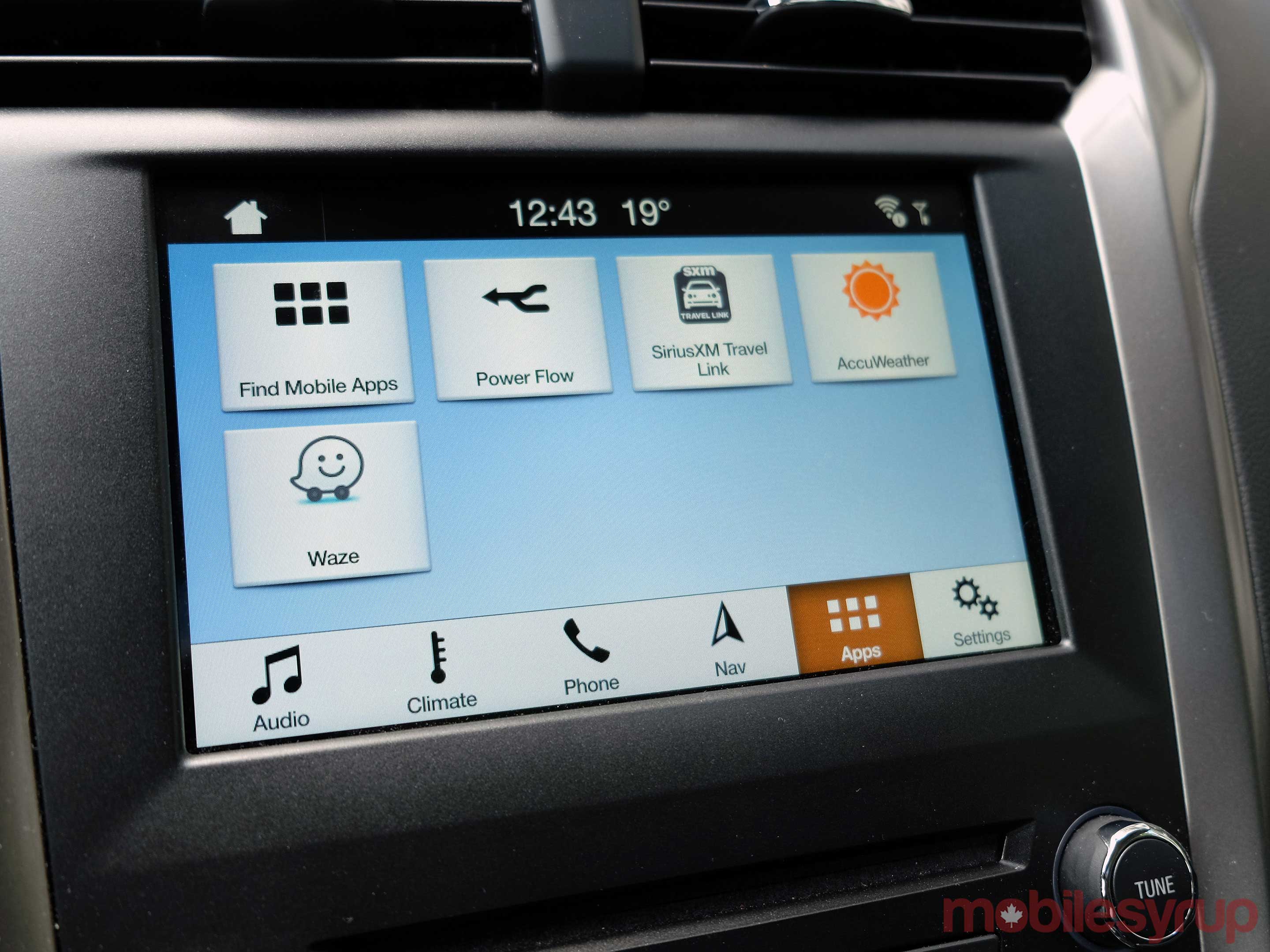 Not since Apple used the 30-pin adapter has it been possible to integrate apps into an automaker’s infotainment system. Not that it hasn’t happened since. There are a smattering of examples, including how Ford integrated Spotify into Sync 3 when it launched.

While unrelated to this story, Spotify pulled the plug on that deal earlier this year, forcing drivers to use the streaming music service over Bluetooth, USB, CarPlay or Android Auto.

Which brings us to Waze. Having any useful app function right on the vehicle’s own screen is the whole point of integration, particularly when the app itself is visual. Ford is making it available to all 2018 model Ford vehicles running Sync 3 version 3.0 or later. Drivers with previous models running the platform can get Waze by updating the system via USB or going to a dealership. Ford Canada has told me there’s no way to do it over-the-air.

There is nothing to install on the iPhone other than Waze itself. It’s also entirely separate from CarPlay, so I had to disable it on Sync just to get this setup to work. 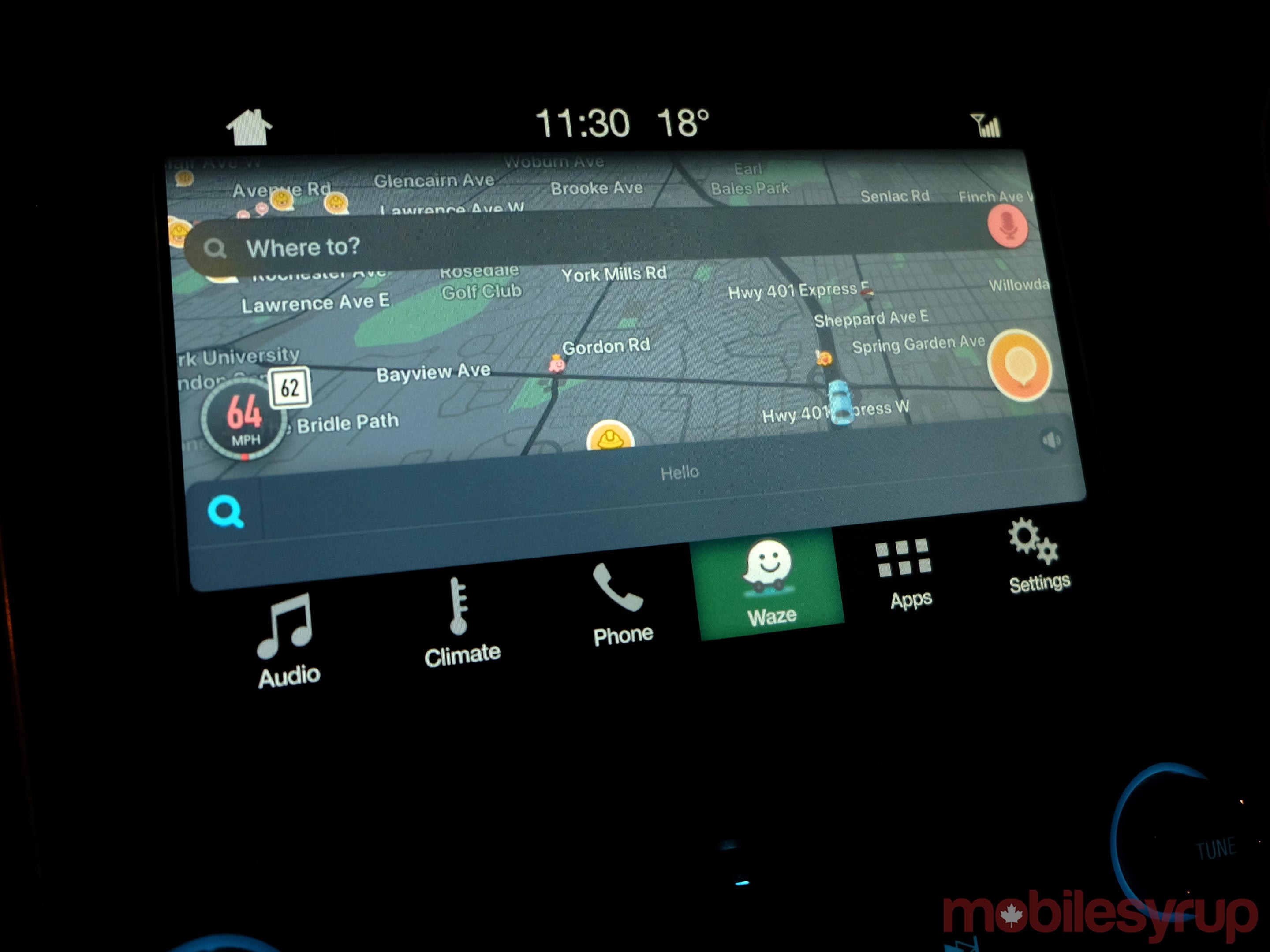 It wasn’t quite as simple as just plugging in the iPhone and seeing Waze pop up. Disabling CarPlay was a key part of the process because it was only then that the app appeared on Sync’s list. I tapped it and a waiting screen appeared, essentially telling me to launch it on the phone. I did, and sure enough, the familiar map showed up onscreen.

The map could only maintain its presence on the display so long as it was running on the phone too. The moment I picked it up and navigated to the home screen, the map disappeared on the car’s display. And unlike CarPlay, tapping the Waze icon again couldn’t launch the app on the phone to bring it back. The process is one-way, meaning that it has to be on the foreground on the phone at all times to stay active.

In cases where I was in the middle of a route, getting out of the app didn’t kill the turn-by-turn directions. The audio was still active, directing me where to go.

CarPlay’s dormant status under this setup also silences Siri, pushing other features, like calls and texts, over to Sync. Ford’s system can keep Bluetooth open for hands-free calling despite the phone being plugged in via USB. I found a bit of a workaround by using Siri Eyes Free holding the talk button on the steering wheel for a few seconds. Siri didn’t register anything related to Waze, so I couldn’t use the voice assistant to ask for directions.

I didn’t need it to make or take calls because Sync handled that well on its own. Messaging is a little less robust through Sync, but I did manage to at least send messages out when Siri would pop up.

I was very surprised to see that Waze’s keyboard actually worked while the car was in drive. Normally, developers disable keyboard inputs for in-car use unless the vehicle is parked. 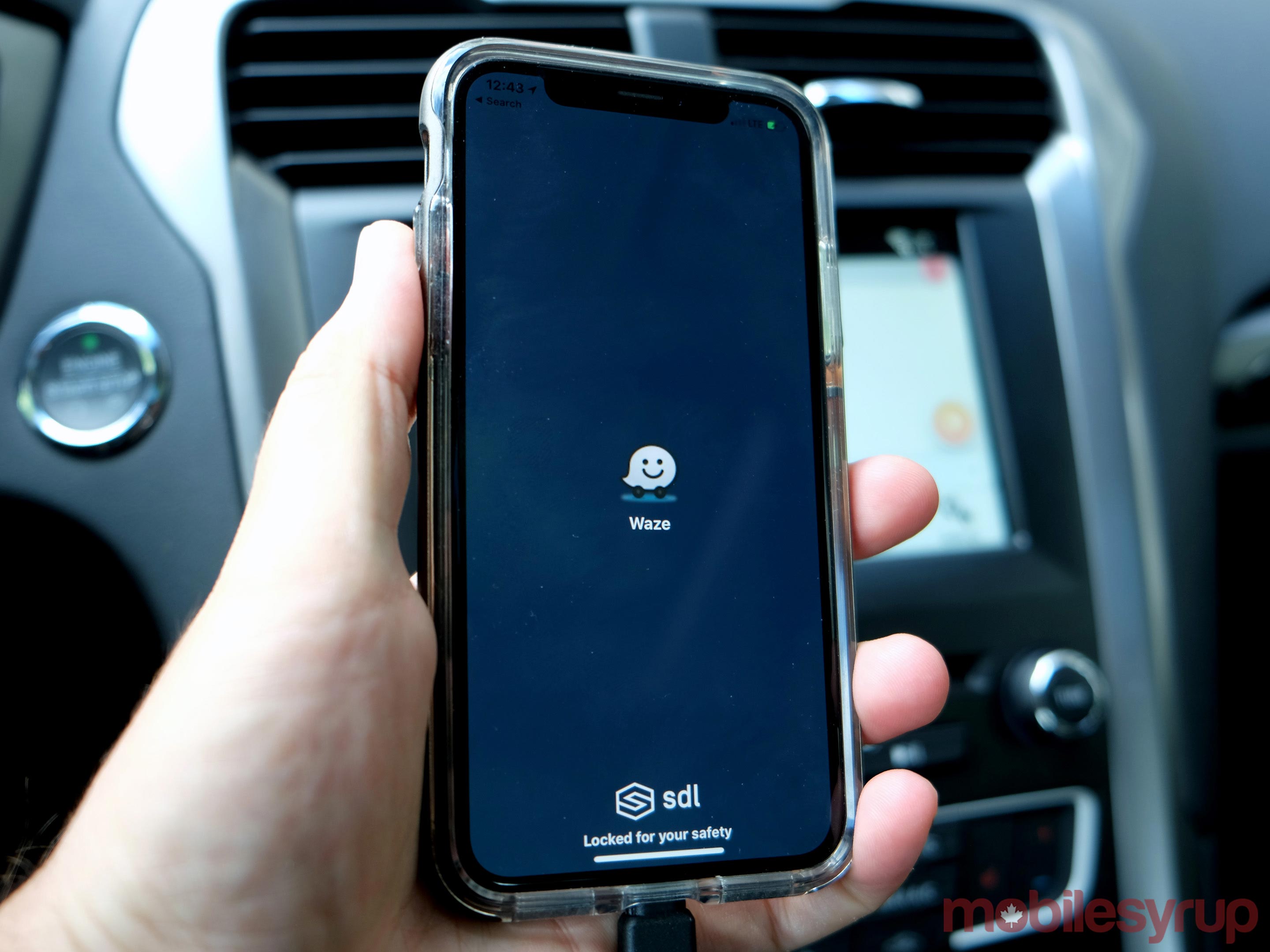 Beyond that, much of the Waze interface was available. I could report a police speed trap, crash, or other road hazard the same way I could otherwise. I could search for a destination or select one from a list of favourites.

Generally, the map was nice and vibrant, and the re-routing Waze is known for worked like a charm when traffic got heavy.

But there were some problems, too. The map randomly froze a number of times — yet the turn-by-turn directions continued unabated. One time the entire app crashed, forcing me to handle the phone to relaunch it again. In a couple of instances, the map eventually came back to life, but wasn’t in sync with the audio for the route.

I couldn’t be sure it was the iPhone’s fault or that Sync caused it, but either way, there were obvious bugs that need to be squashed. There also needs to be a better way to launch the map directly from Sync’s AppLink screen without having to touch the phone. 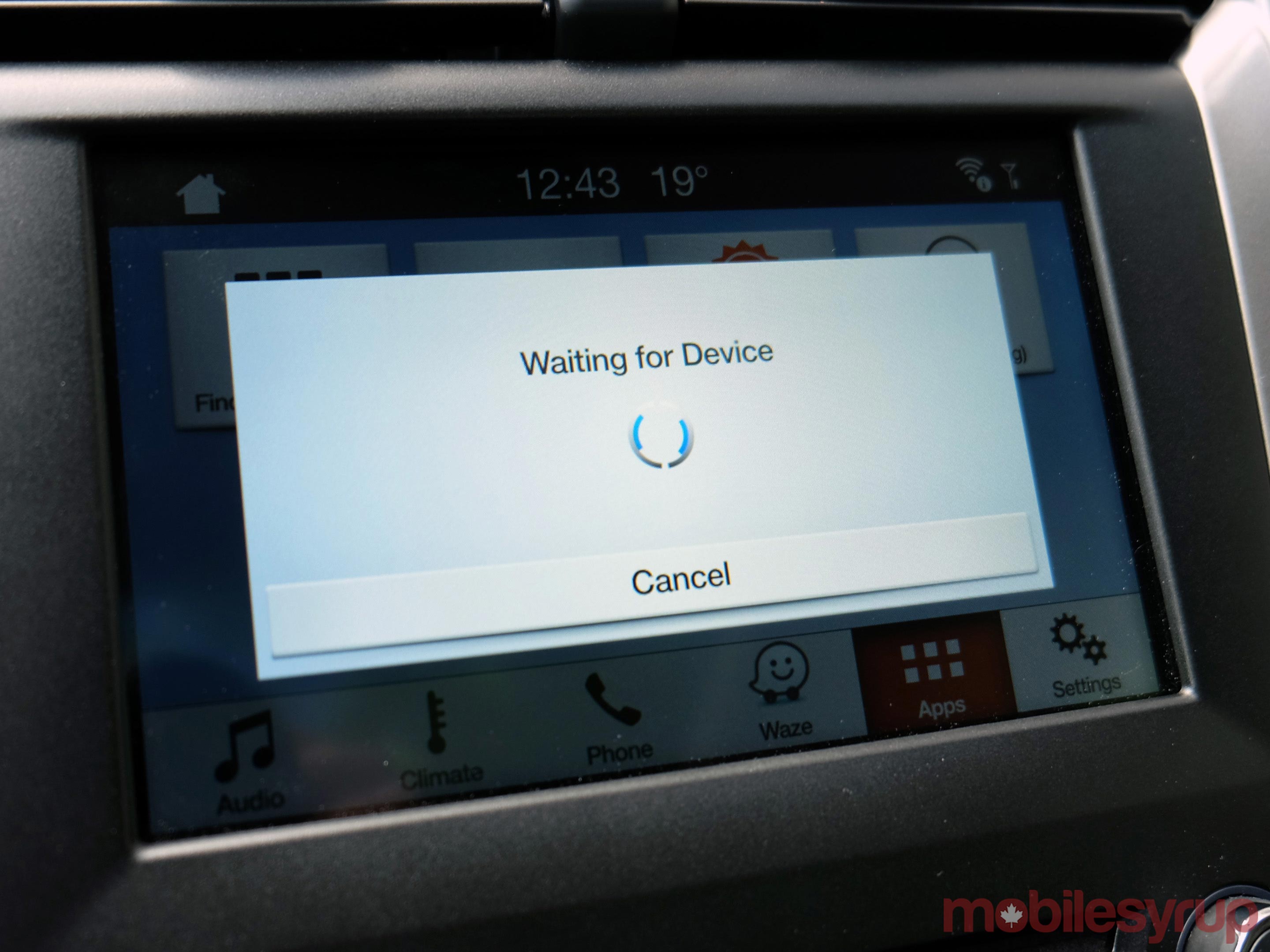 Waze’s onscreen voice control was fine for searching a route or navigating to a preset destination (home, work, etc.), but there is no physical integration otherwise. You have to tap the mic on the screen each time you need to say something.

Playing music also needs to be planned in advance, unless you have a passenger handling things. CarPlay enables access to multiple music apps, all of which are inaccessible through Sync. Ford’s platform can only show what the phone is playing and present basic playback controls, but to switch from Spotify to Tidal, for instance, I could only do it on the phone itself.

Despite CarPlay’s absence in this integration, Waze’s performance on an infotainment display indicates how the popular map will work on the platform. Apple has already noted that third-party apps are coming in iOS 12.

It does nothing for Android users who have already been able to enjoy both Waze and Google Maps, but iOS users can rejoice that they may finally bid a permanent adieu to Apple Maps.

For Ford, integrating Waze brings a widely known and respected app to its own platform. More of that will be necessary to keep Sync relevant. Otherwise, CarPlay and Android Auto will continue to swallow up all other opportunities.

"For Ford, integrating Waze brings a widely known and respected app to its own platform"