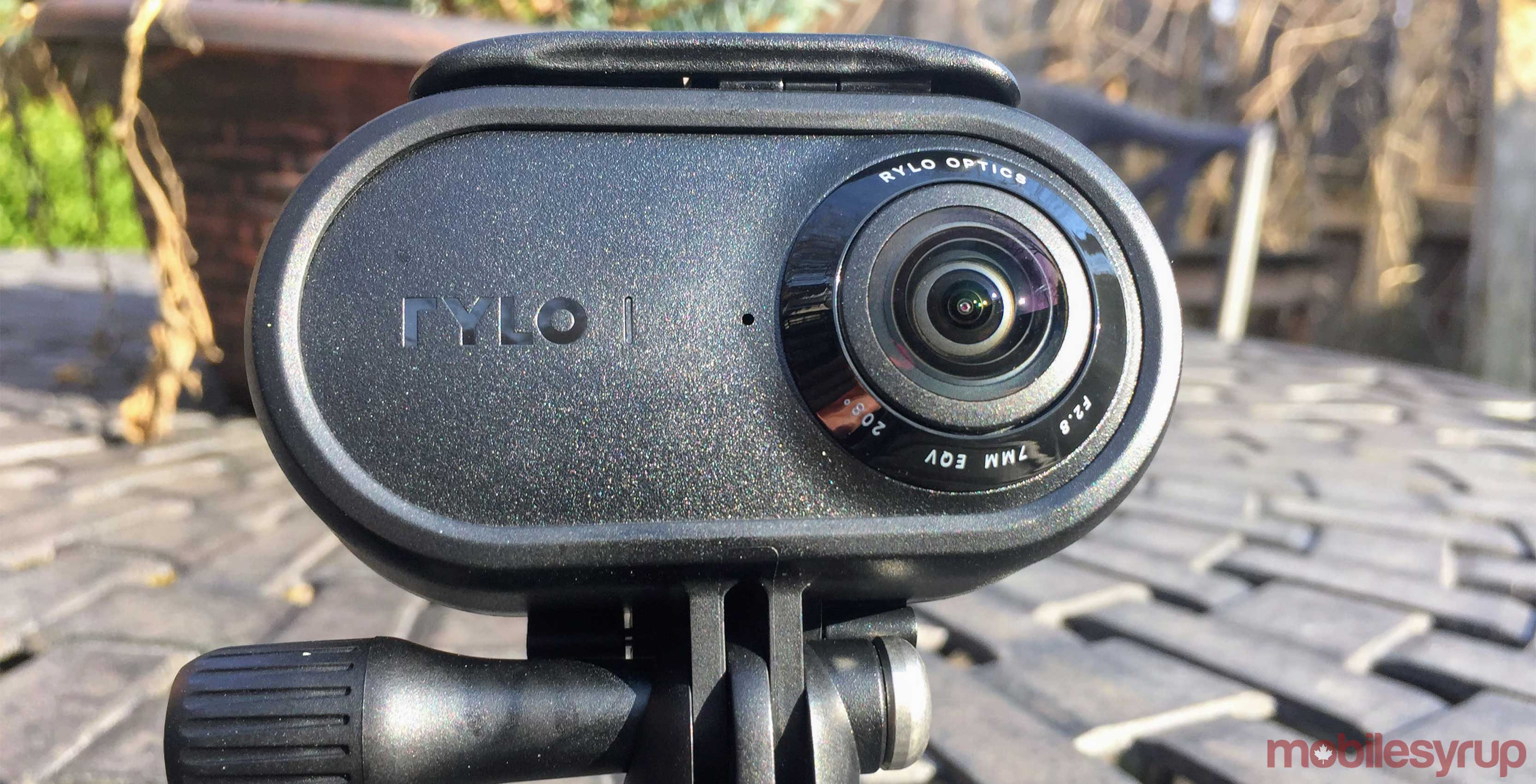 Their go-anywhere design and cinematic quality let us capture some of our most memorable moments — usually while we’re in the middle of enjoying them. 360 cams are also pretty cool, giving us the ability to ‘look around’ our footage and photos after the fact, possibly revealing something that we missed. But what if we could combine these two great ideas into one all-purpose camera?

That’s the premise of the Rylo ($500 USD), a new 4K 360 camera that gives users a unique way of sharing their photos and footage. Just like regular 360 cameras (Samsung Gear 360, Ricoh Theta S, Nikon KeyMission 360 etc.), Rylo captures 360 photos and videos, thanks to its dual 7mm, F2.8 lenses. But what sets the Rylo apart, is the ability to use that material to create standard high-def videos, that you direct.

It sounds weird, but it’s a game changer. Read on for our review of the Rylo. 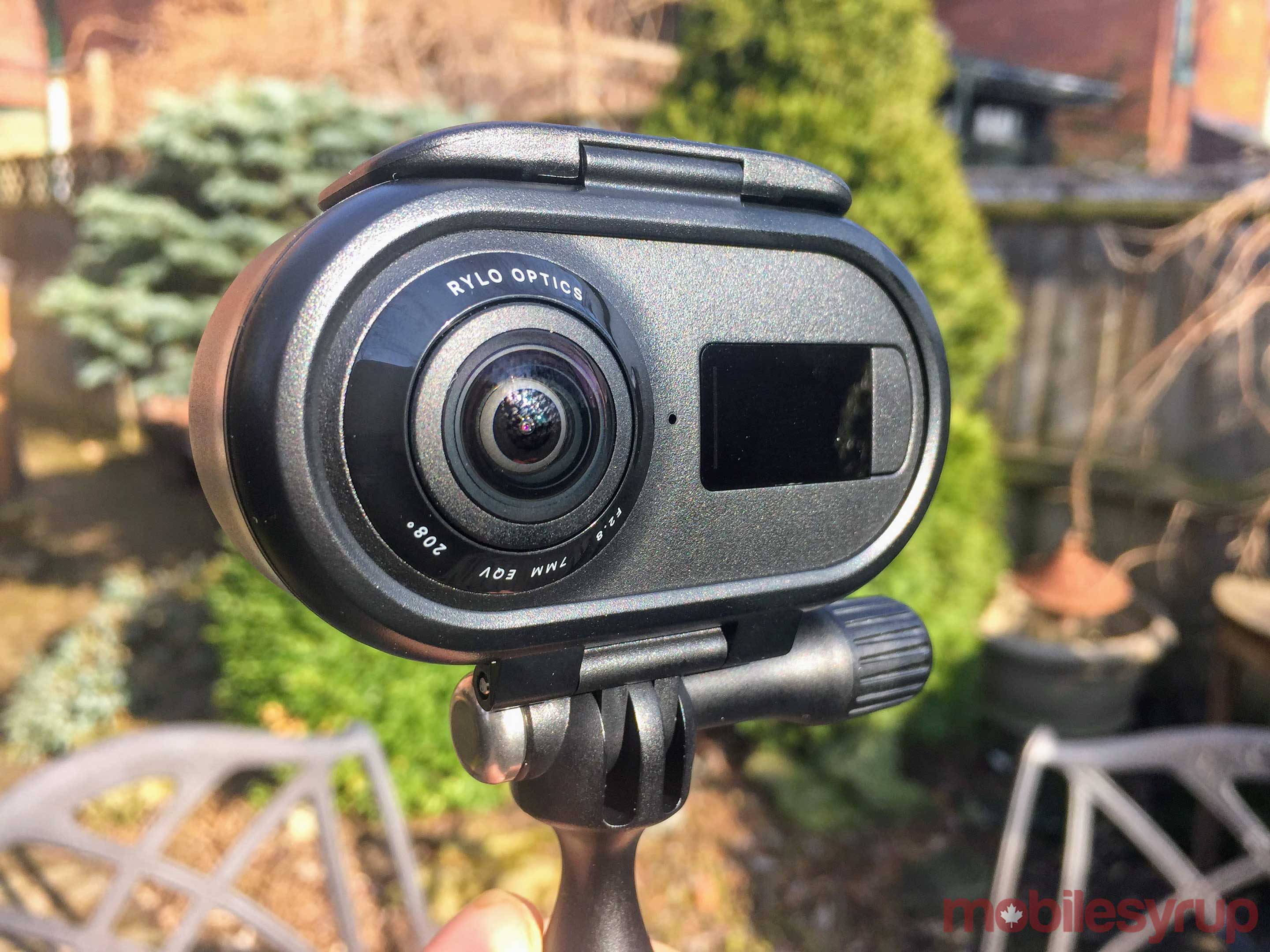 The Rylo is minimalist in every way. In the box, you’ll find the camera, a protective pouch, a battery, an SD card, and two cables — one for transfers, the other for charging. With a sleek, brushed aluminum-wrapped body, it’s as beautiful as a camera gets. But without an easy way to grip it while shooting, or a tripod mount, you’ll definitely need the Everyday Case ($30 USD), which comes in its own box and currently ships free with every Rylo (for now).

Calling it a case may be an overstatement — it’s more like a frame with an integrated GoPro-compatible mount — as it does little to protect the camera. But it comes with a small handle that has a loop lanyard, and a standard tripod mounting hole beneath a protective end cap.

The Rylo itself couldn’t be simpler to operate. There’s a single button on the top of the camera’s body that does double-duty as a power toggle and a start-stop-shutter trigger. On the ‘back’ of the Rylo — a term that’s almost meaningless in a 360 world — is a small OLED screen with a flush mounted button beside it.

The screen lets you know the bare minimum you need to operate the camera: Whether you’re shooting 360 video, 180 video (with the back camera disabled) or stills, how much of each you can still cram onto the SD card (Rylo includes a 16GB card, but can handle up to 256GB), and battery life. The button toggles you through the three shooting modes.

For videos, you start and stop recording with the top button. For photos, you can decide — using a setting in the app — how long of a delay you want after you press the button: none, three, or ten seconds… helpful when you need to get your hand (or your whole body) out of the shot.

The only thing you need to be aware of, is that the Rylo places a hard limit on the size of a single video, at 4GB. That’s roughly equivalent to nine minutes, but it will vary depending on how complex your environment is. The camera will keep recording beyond this limit, but you’ll end up with multiple files. More on this later. Rylo claims that a fully charged battery will let you shoot continuously for 60 minutes (assuming you’ve got that much room on your card) and we think that’s fairly accurate. 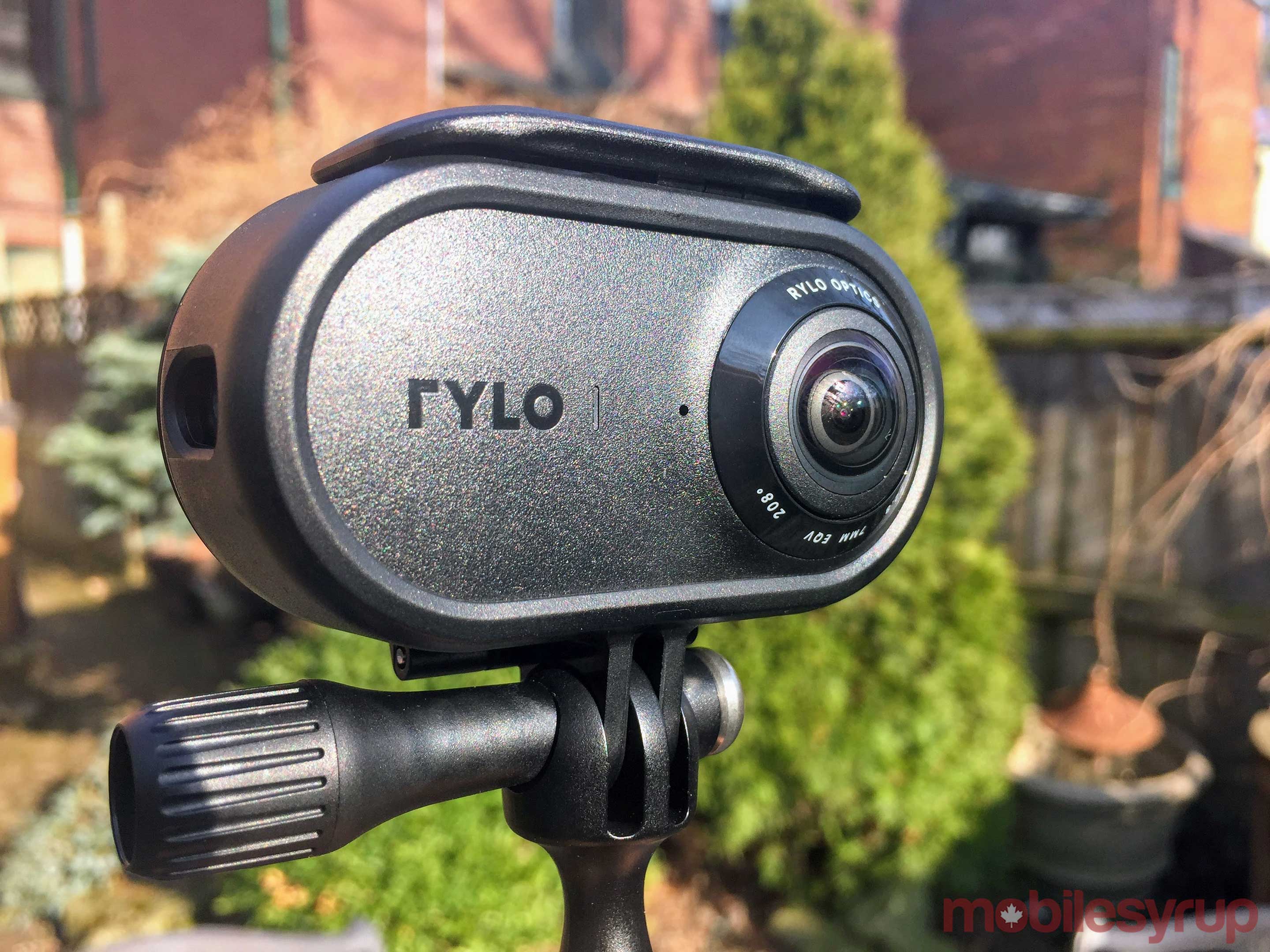 What makes 360 footage fun is the feeling of “being there,” but most of us could do without the shakiness inherent in almost all action videos. Too much of it and you may end up feeling nauseated.

Thankfully, Rylo has top-notch image stabilization, which eliminates all but the biggest of bumps. The result is silky smooth video.

Unlike almost every other camera on the market these days, the Rylo doesn’t do wireless transfers. It has Bluetooth, but no Wi-Fi, which means using a physical cable for moving files around. In fact, when you buy it, you have to choose if you’ll be using it mostly with an iPhone or an Android device, so that you get the right transfer cable (you can buy the other cable as well, as an accessory).

We miss the freedom of having a wireless connection, and frankly having yet another cable to lose or damage feels very 2005, and yet, there’s no mistaking the advantages: Super-fast transfers of massive video files, and zero hassles with flaky wireless connections. 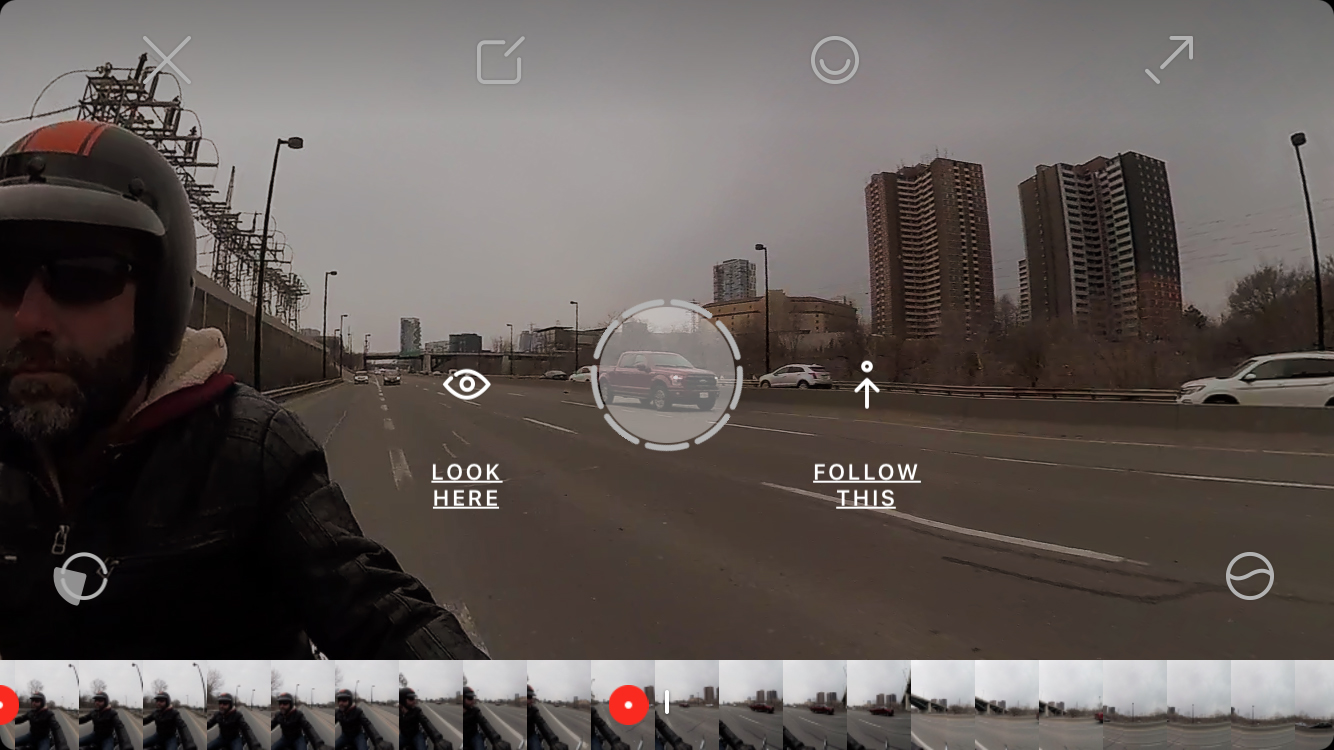 The real wizardry starts when the shooting stops. Once you’ve imported your content to your phone using the included cable, the Rylo app gives you a wealth of editing and saving options. You can trim the length and alter the speed of your videos (up to 16x faster timelapse — sorry, no slow-mo), modify how they look with six tuning adjustments, and fix any problems with the level. Our only real gripe here is that there’s no Instagram-ish set of one-touch filters.

A feature called FrontBack View lets you add a picture-in-picture (or side-by-side) of what the second camera lens sees. In practice, you can have any point of view you like — even the same view as the main window. We’d like it if the app let you move the FrontBack window anywhere in the frame, but for now you’re stuck with the template.

There’s also a choice of crop formats: From a phone-friendly portrait, to the more conventional square, wide, or cinema. From there, you can choose to save it to your camera roll as either an HD video or a 360 video, with or without audio.

But the real jaw-dropping features are Follow This and Look Here. Follow This lets you identify an object or person (or animal?) in your footage just by tapping on it, and then automatically follow it, wherever it goes, for as long as it can see it. It works incredibly well, though on one video it hilariously lost track of the car we were following and decided to follow a truck instead.

With Look Here, you can pick a specific area of the 360 view and the point of view will gently swing over to that position from wherever it had been looking beforehand. With careful use of Follow This and Look Here, you can direct an entire video, after the fact, and change it as many times as you like. We found Rylo’s app interface for all of the features very intuitive: It took less than 20 minutes of messing around to output several fun variations on a video shot from the handlebars of a motorcycle.

If that explanation has you scratching your head, think about this way: If you mounted a GoPro on a really expensive motorized professional tripod, which you could remote control to point anywhere you wanted while shooting, that’s effectively what Rylo gives you. But Rylo is actually way better than that fictional set up, because if you don’t like the way those tripod moves look, you don’t need to re-shoot the whole video — you simply change the Follow This and Look Here guides in the video until you get exactly what you want. 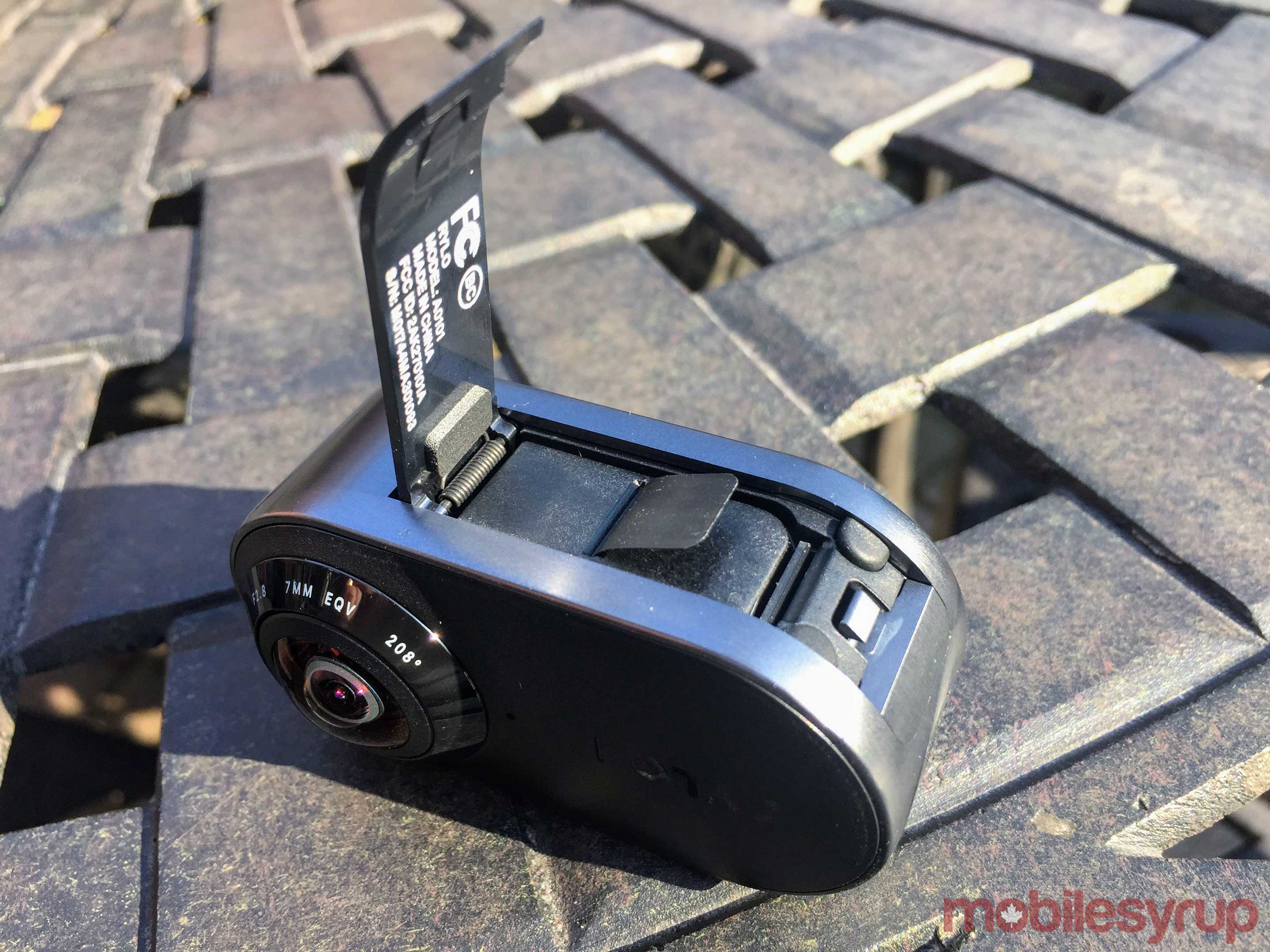 Being able to choose whether you want an immersive 360 video that lets viewers decide what to look at, or an HD video where you control the camera’s gaze, is the ultimate in creative freedom.

Being able to make that choice from the same footage is the ultimate in convenience. It’s a potent cocktail that goes a long way to justifying the Rylo’s steep price tag. While not for sale yet in Canada, Amazon.com will sell and ship one for $500 USD (about $630 CAD + taxes and duties). This is hardly discretionary spending for the average consumer, especially given that the price of decent action and 360 cameras have been dropping steadily as their features improve.

If the price doesn’t faze you, another limitation to consider is that currently, the company doesn’t offer desktop software, though it tells us that plans to do so are in the works. This means that all of your editing and exporting of movies and photos will have to take place on your phone. 4K 360 files tend to be monstrously large, and if your phone is short on storage space, this will limit the number of videos you can save. 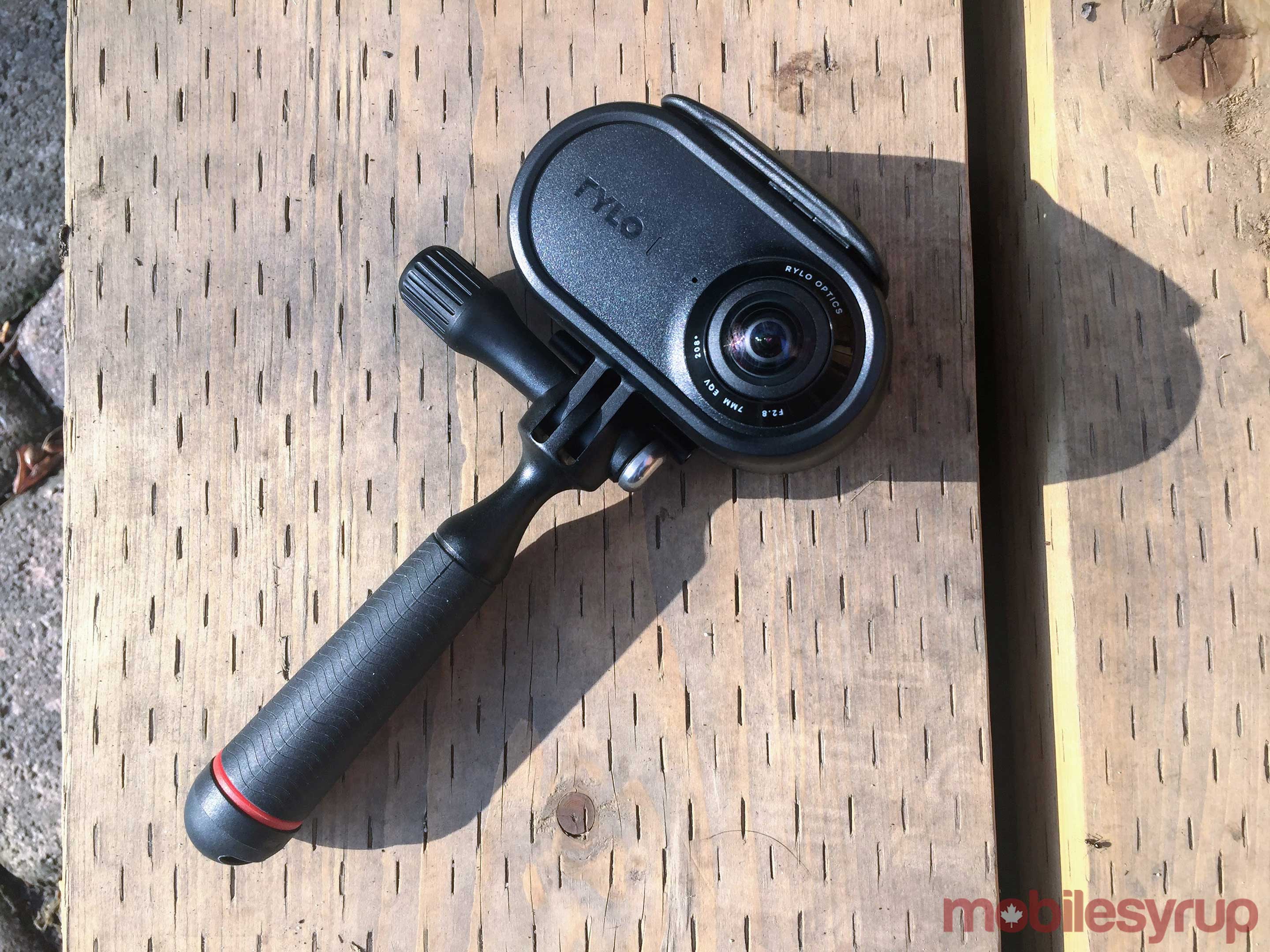 There’s always the option of saving your raw footage from your SD card to your computer, but given that there’s no way to edit them there using Rylo’s clever tools, this is purely an exercise in data protection. If you intend on shooting a lot of footage, you’ll need a big SD card, lots of room on your phone, and ideally, a portable hard drive that you can backup your files to when that room runs out. Speaking of file, remember that 4GB file size limit?

Even though Rylo will keep recording, creating new files when it hits that hard stop, there’s no way to join those files together in the app, which is unfortunate. 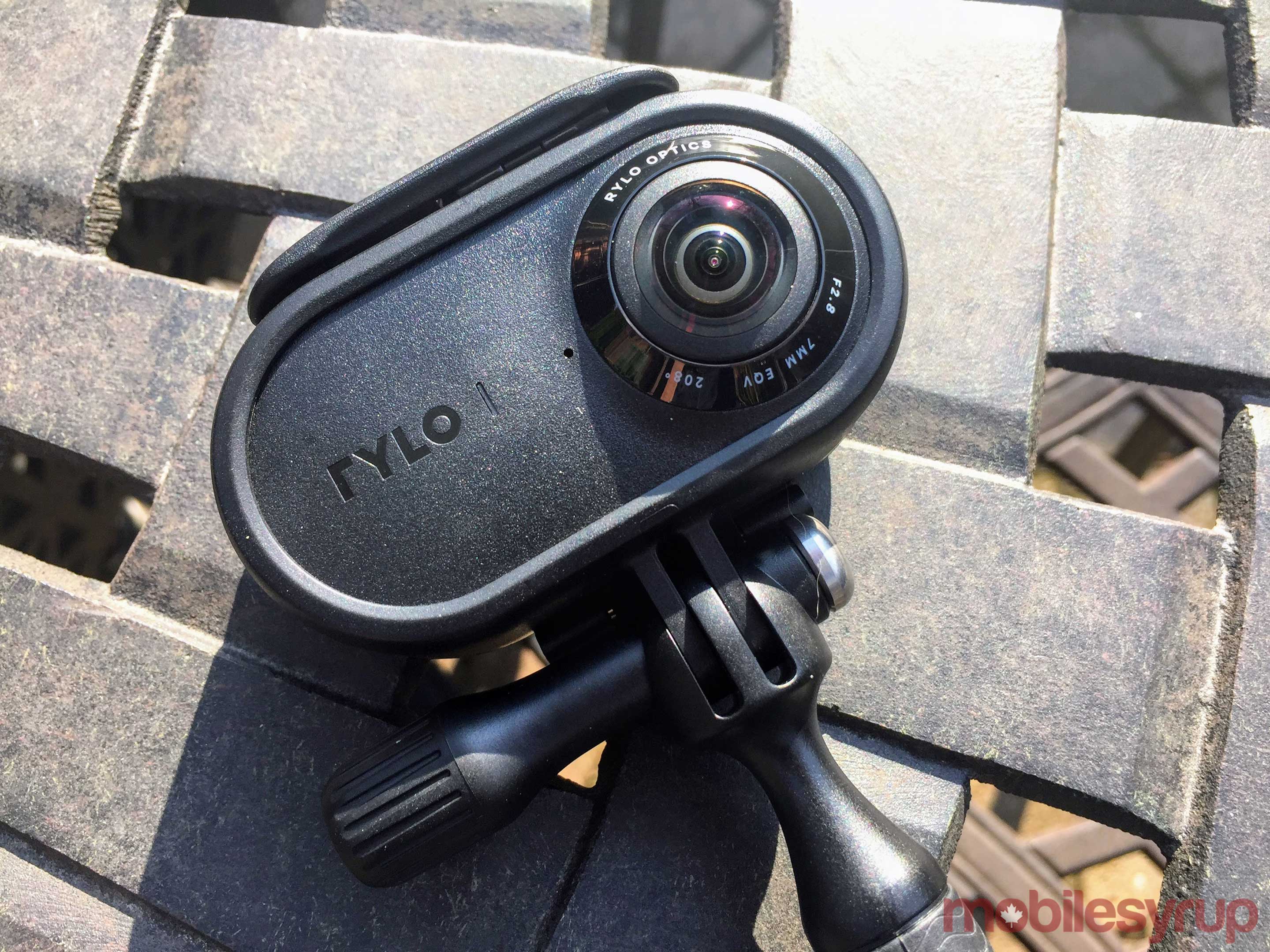 The GoPro Fusion is already waterproof without the need for an extra case, and it has both Bluetooth and Wi-Fi for fully wireless transfers. It comes with a stick/tripod combo called a Fusion Grip, it can be controlled with voice commands, it captures 360 audio, and it shoots in 5.2K, giving it more detail to work from than the Rylo’s 4K resolution. These are all solid benefits over the Rylo, but we wouldn’t call them deal-breakers.

The Fusion doesn’t come with an SD card, and GoPro’s version of shoot-then-point — which it calls Overcapture — works a little differently. There’s no auto-follow of on-screen objects, and instead of pointing where you want the camera to look, you have to play virtual camera operator, by moving your phone’s screen around in real space, while the video rolls. Don’t like how it worked out? You’ll have to do it all again.

The Insta360 One is a bargain compared to both the Rylo and GoPro Fusion, and even has an auto-follow feature that looks identical to Rylo’s Follow This, and a slow-mo 120fps mode, which is missing from the other two cameras. It has a cool feature which automatically erases a selfie-stick from footage, giving the videos a ‘flying camera’ look.

Expanding what a camera is capable of

The Rylo is an impressive gadget that greatly expands what you can do with a camera. Its built-in stabilization is a big improvement over previous generations of 360 cameras, and its build quality is excellent.

The inclusion of an SD card and the Everyday Case/grip means you’ve got everything you need to start shooting. But the real magic isn’t in the camera, it’s in the Rylo app, which makes creating engaging, shareable videos a cinch, whether they’re fully-immersive 360 clips, or regular HD. As such, the Rylo is simply one of the first of what we expect will be a new breed of action camera, one that will quickly become the norm, as resolutions continue to increase while prices continue to drop.

Buying one now gives you bragging rights, and the ability to enjoy these cool features right away -- we don’t think you’ll be disappointed. But if the cost of admission is too high, take a look at the Insta360 One, or, wait a year. Twelve months can have a huge effect on gadget prices -- consider that less than one year after launch, the Samsung Gear 360 now sells for less than half of its original price -- and we suspect the Rylo and its competition will soon become more affordable.

OnePlus Buds Review: It doesn’t get better for the price