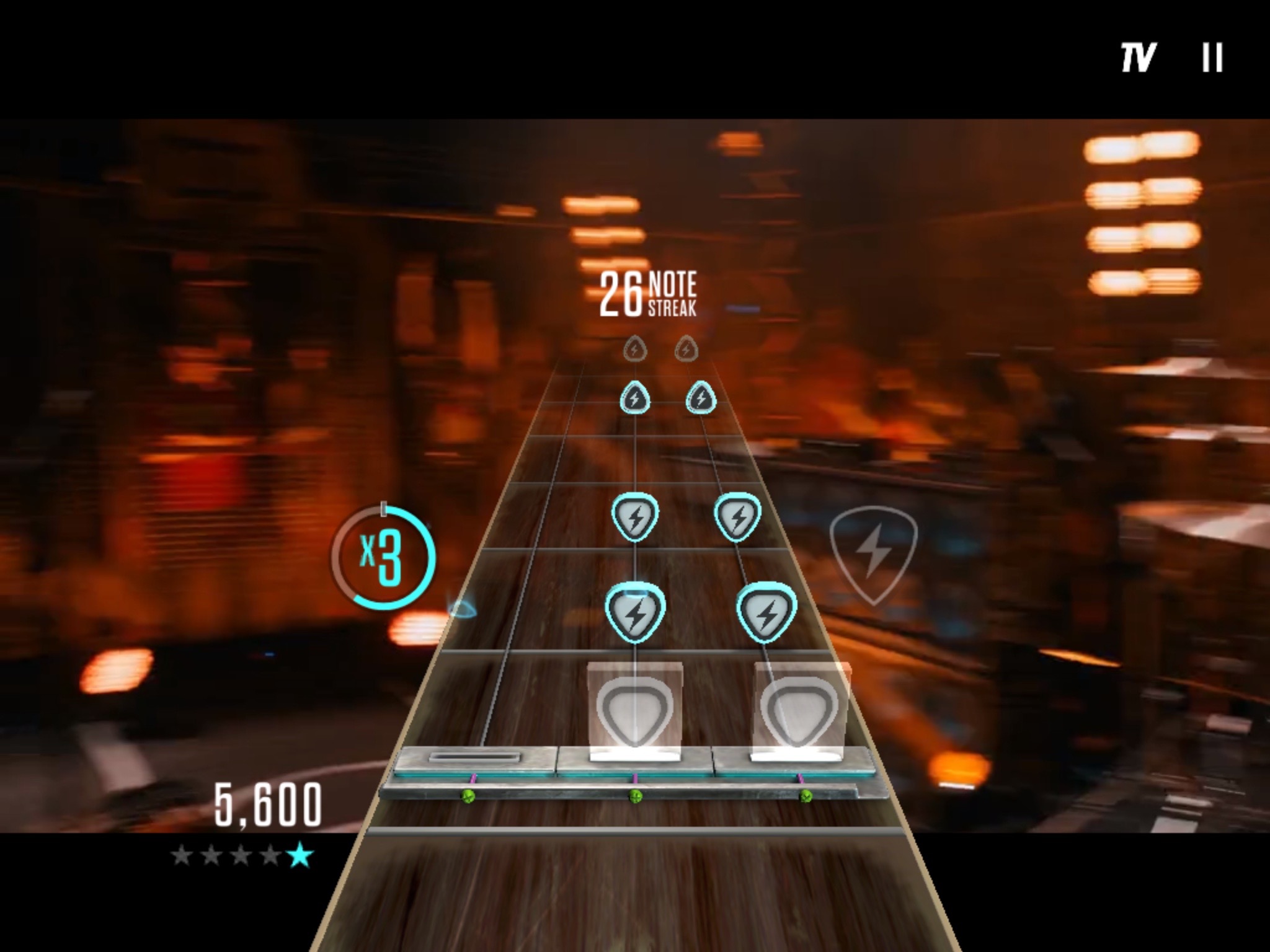 There was a time in the mid-to-late 2000’s when music games were everywhere. But today, the plastic guitars that once ruled the sales charts have been relegated to pawnshops, dusty closets and in some cases, dumpsters.

With Guitar Hero Live, Activision and Freestyle Games are attempting to revive a dead genre by focusing on what made it so popular in the first place:  recreating the experience of playing a real guitar.

But is there a demand for music games in 2015? Not really. But that doesn’t mean Guitar Hero Live is a bad game.

To my surprise, the latest iteration of the once monumentally popular Guitar Hero franchise has made its way to Apple’s iOS operating system. This isn’t a pared-down version of the game’s console counterpart either, like past mobile entries in the series. 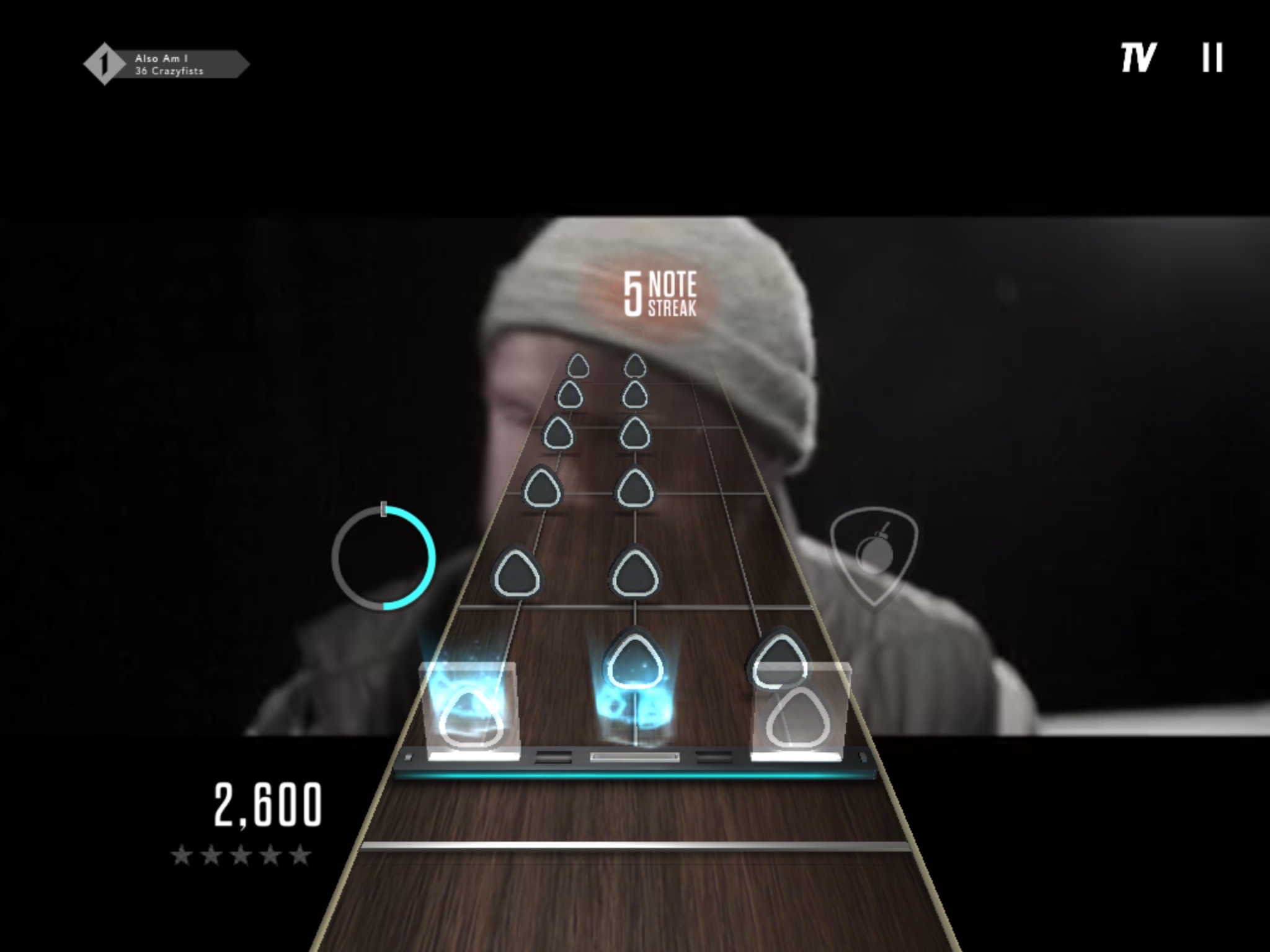 On iOS, Guitar Hero Live utilizes the series’ standard full-sized plastic guitar, although players can also opt to play the game with touchscreen controls. While Guitar Hero Live is playable with just a touchscreen, after spending just a few minutes using this control method, I quickly realized it is not how the game is meant to be played. A touchscreen will never be able to recreate the tactile feel of physical buttons.

Playing Guitar Hero on a tiny iPhone screen is not an ideal experience and while the game is playable on such a tiny screen, actually viewing what notes you’re pressing is a difficult task. It also doesn’t help that the game can’t be played in portrait mode when using an iPhone, limiting viewing space considerably.

To my surprise, I actually enjoyed not being tethered to my television screen when playing the game. Because the iOS version of Guitar Hero Live is portable, I’m able to play from my office, couch, or any location in my apartment.

However, the fact that I have to hunch over in order to see my display often results in a painful plastic guitar playing experience. Placing your iOS device on a waist-height kitchen table solves this issue. 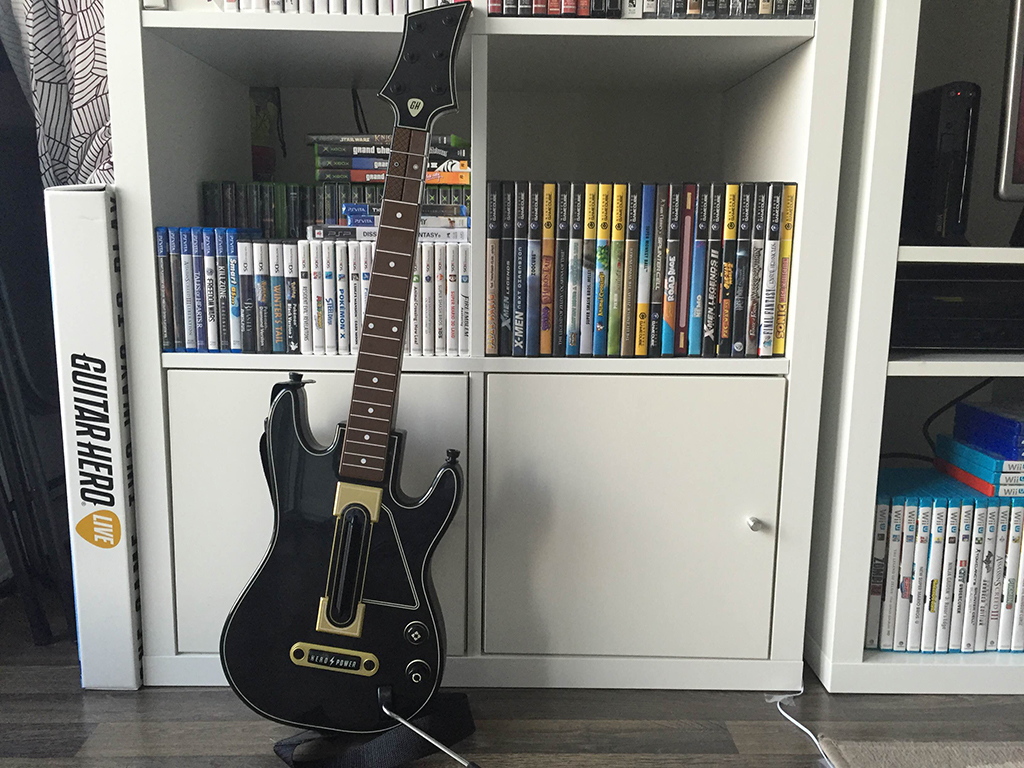 In fact, because Guitar Hero Live is available on iOS, the game can actually be played completely on mobile. Very few people will opt to do this because it would make you look ridiculous, but you can actually play the game anywhere, even on the bus on your way to work, which probably isn’t something you should do.

Unlike this year’s other music game revival, Harmonix’s Rockband 4, Freestyle games has taken a different route with their title. Guitar mechanics have been overhauled and Guitar Hero Live’s plastic controller now features six buttons in two rows of three instead of five. Songs require the player to switch between the plastic guitar’s upper and lower buttons, closely mimicking the finger dexterity required to play an actual guitar (or so I’m told).

While this new control scheme took me a short period of time to grasp, after just a handful of songs I caught on and could easily play most of Guitar Hero Live’s track on the default difficulty level.

Aside from this shift, the game’s core mechanics remain the same. Notes travel from the top of the screen to the bottom and it’s the player’s job to press the guitar’s buttons in quick succession, nailing the timing of each note. Gameplay structure is where Freestyle has implemented changes to the latest entry in the Guitar Hero franchise. 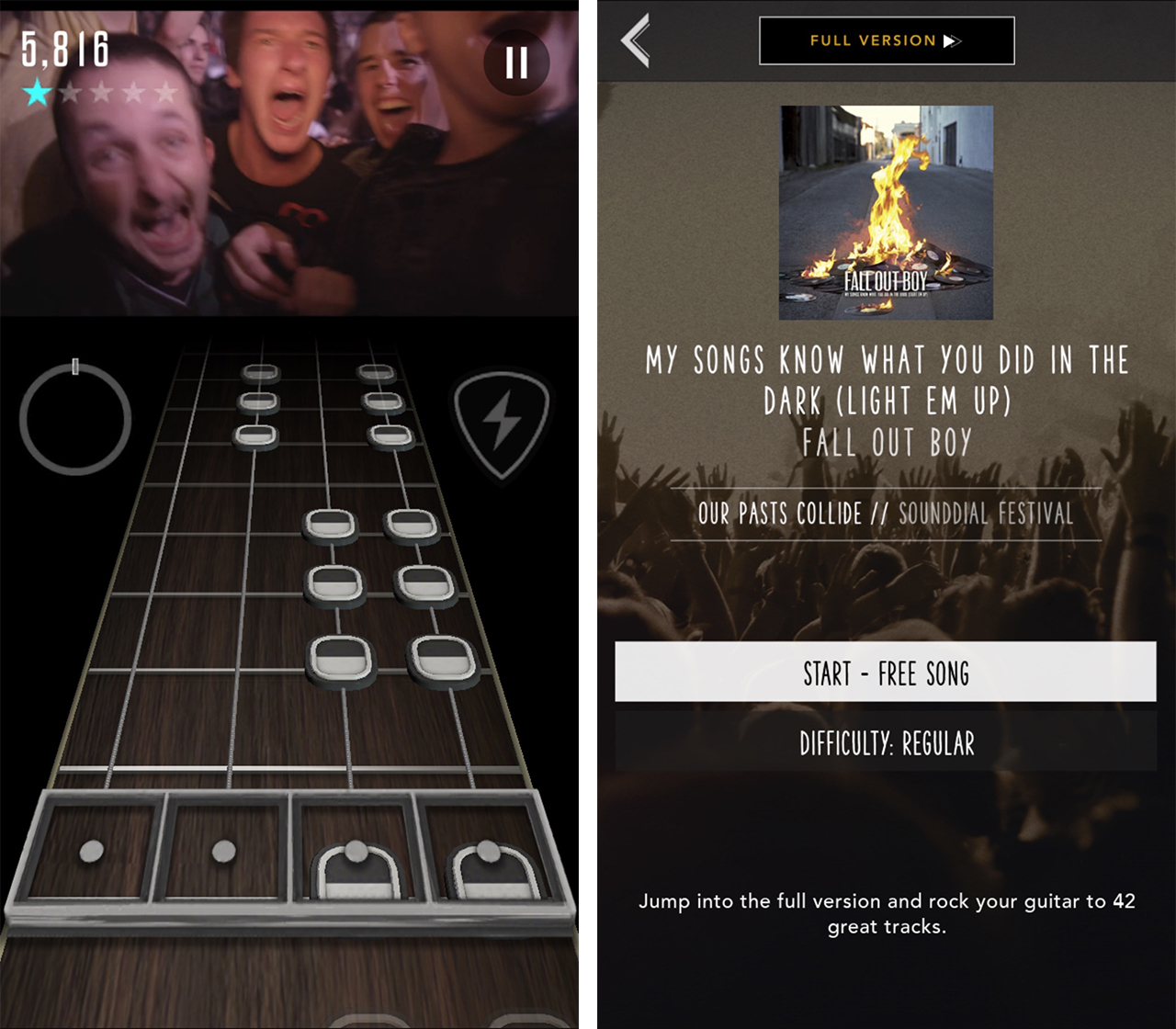 Unlike past Guitar Hero games, Guitar Hero Live is played from a first-person perspective, giving players a different view of the game’s virtual crowd than what has been featured in past Guitar Hero games. Also, rather than the traditional visuals commonly found in past music video games, or even games in general, Guitar Hero live features pre-rendered full-motion video. While the new visual direction of the series is off-putting at first, I don’t think I could go back to the series’ original cartoony style.

This allows the player to closely view how the crowd reacts to their performance. If you’re playing poorly, the angry crowd will throw projectiles at you, but if you’re killing it with “sick riffs,” they’ll cheer you on, screaming your band’s name and singing along to lyrics. The game’s full-motion back up band overacts when jamming out to almost every song, but there’s also an endearing quality to how the audience reacts to your playing. 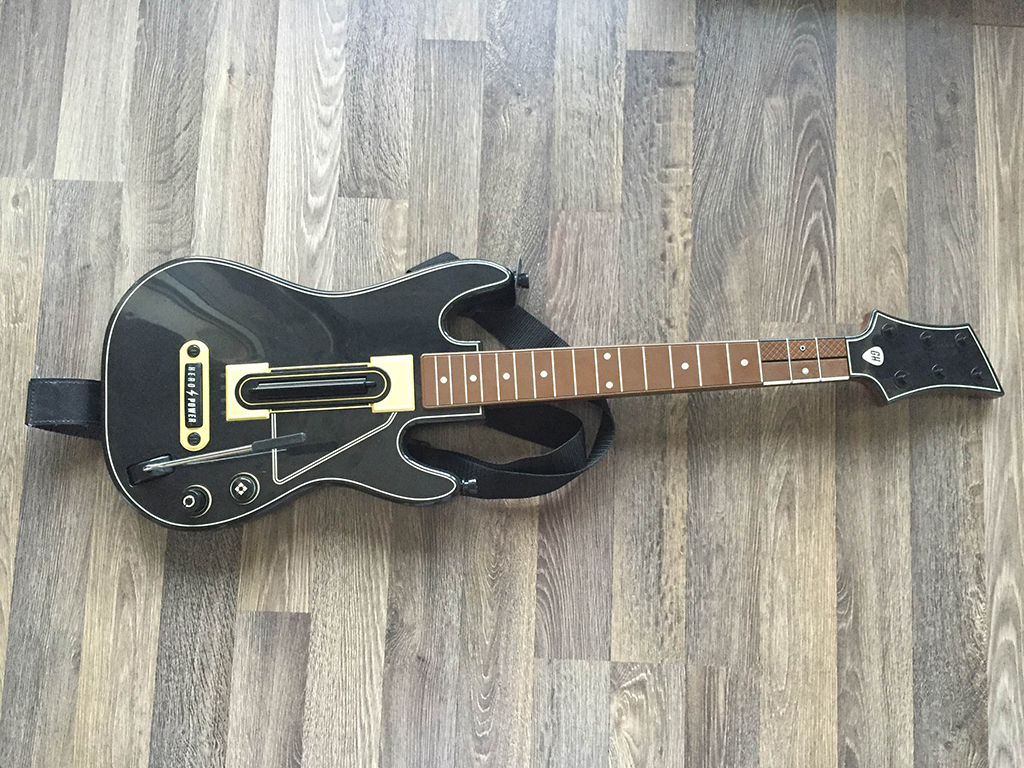 But the most significant change to Guitar Hero Live comes from its new TV mode. This feature operates like a radio station and changes music genres every 30 to 60 minutes, which leads to a level of music discoverability that’s comparable to Spotify or Apple Music playlists. As soon as you pick a specific station you’re immediately thrown into whatever random song is queued up at the time.

The game’s song selection slants on the modern side, ranging from early to mid 2000’s pop punk like Fall Out Boy’s Sugar, We’re Going Down, to Blink-182’s First Date (two of my favourite songs in the game), to classic rock like Iggy Pop’s Real Wild Child (Wild One) and songs from mainstream pop artists like Avril Lavigne and Rihanna. While some people will likely find Guitar Hero Live’s library of songs unappealing, its shift towards modern pop music will help the game appeal to a wider audience. 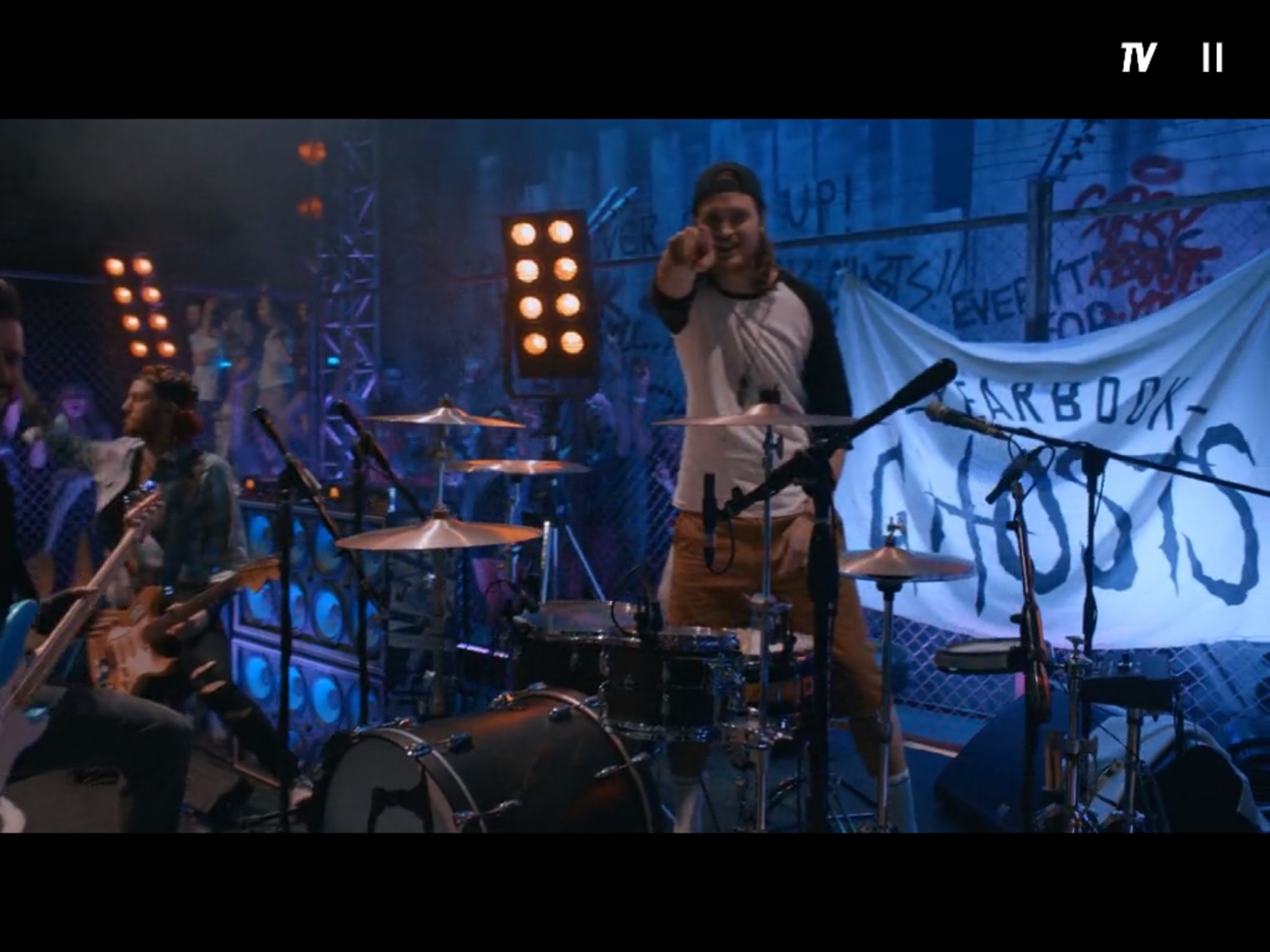 Activision and Freestyle Games update TV mode’s playlist every few days giving players a constant stream of content. While it’s frustrating that few of these songs can be downloaded and played again at a later date, TV mode extends Guitar Hero Live’s life considerably and is an interesting take on the way music games traditionally operate.

Guitar Hero Live’s main story is largely the same as what was featured in its predecessors’. You play as a career session guitarist and work through various set lists. While being able to once again select specific songs is a welcome shift, I found myself spending more time in TV mode. It’s exciting to see your favourite song show up in Guitar Hero Live’s TV and replicates the thrill many people experience when their favourite song plays on the radio. 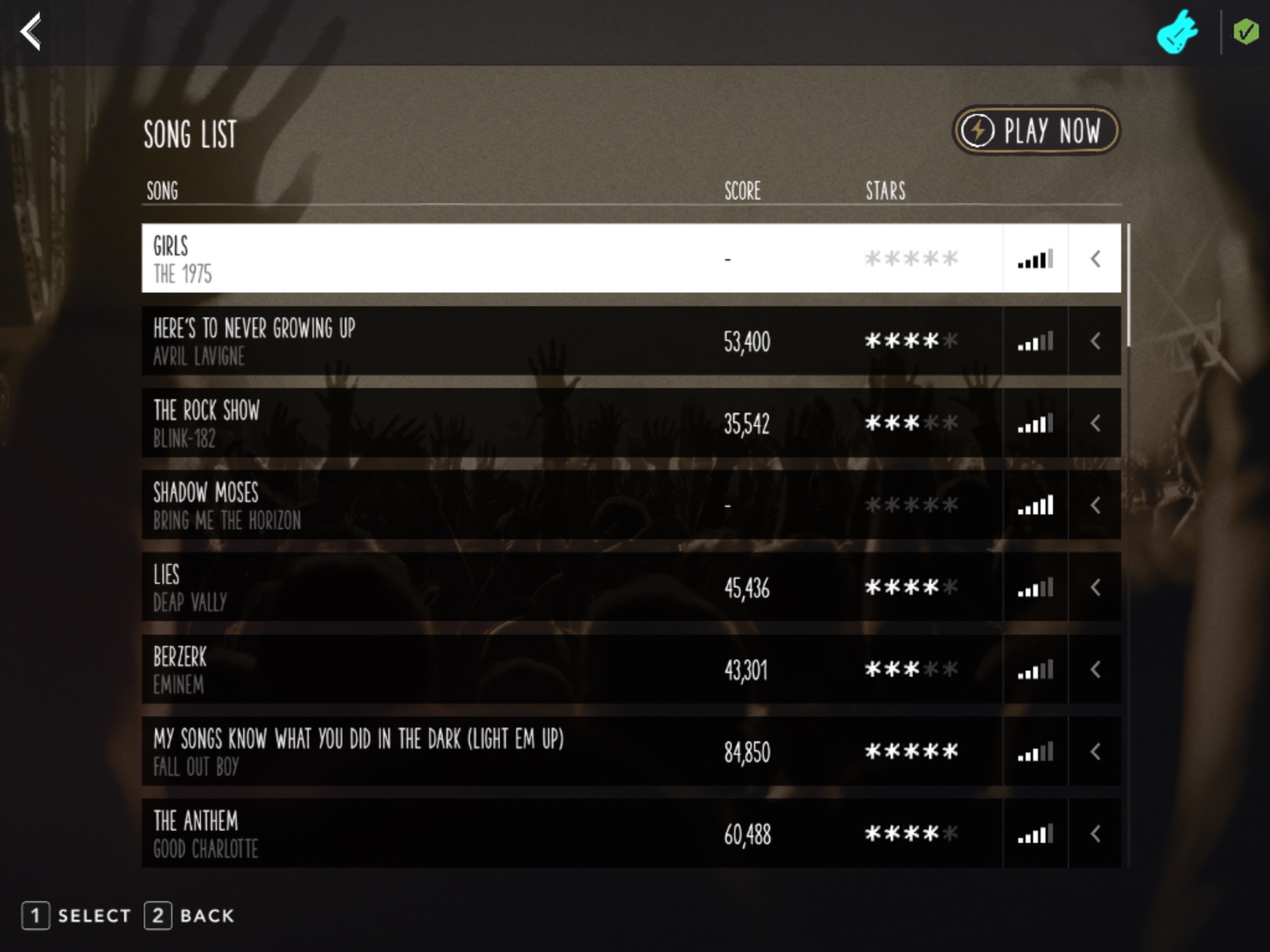 Unfortunately, the iOS version of TV is missing the live rankings that can be viewed while playing Guitar Hero Live’s console counterparts. The ability to purchase individual songs from TV mode’s stream to play whenever you want is also absent. Hopefully these features are added again in a future update.

If you enjoyed Guitar Hero or Rockband in the mid to late 2000s you’ll likely have a great time with Guitar Hero Live. Just be aware that Freestyle’s Guitar Hero revitalization effort is largely the same as past entries in the series, save for a few key differences.