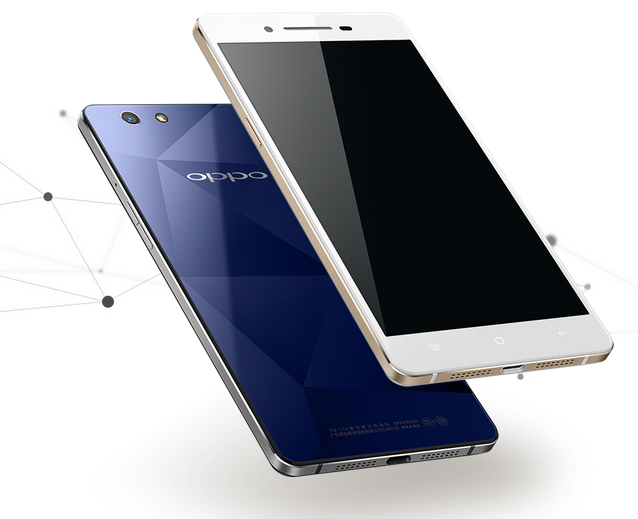 While Xiaomi teases us about its upcoming announcement for its latest flagship (whatever that turns out to be), another Chinese phone maker has surprised us with the unveiling of a new addition to its smartphone portfolio.

Of course, given the breakneck speed at which mobile hardware has evolved, it’s become relatively easy to put together a powerful smartphone without using top-of-the-line everything in the device’s construction (this is something we saw with the Moto G and it’s become more prevalent in the year and a half since). To that end, Oppo has played special attention to the phone’s design.

The R1C has sapphire glass on the back and gold or silver chamfered edges (depending on your choice of white or navy). The reflective glass is layered on top of a geometric pattern that yields a gem-like (or “diamond”) effect that looks sleek but also promises durability thanks to its scratch- and shatter-resistant material. The R1C measures in at 6.85mm thick and weighs just 130 grams. It’s about the same thickness and weight as the iPhone 6 (the iPhone 6 is 1g lighter but a hair thicker), despite the R1C’s larger display.

Oppo hasn’t talked about international availability of the R1C but the phone will debut in China on January 20th and is now up for pre-order on the company’s online store for about $480 CAD.