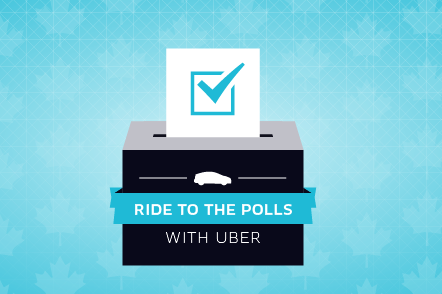 Uber recently launched its ride-sharing service, UberX, in Toronto and Ottawa. Now, the company is offering up free rides in an effort to promote its service while helping citizens perform their civic duty.

The promotion is valid on election day, which is this Monday, October 27th, and available from 9:00am to 9:00pm. Users must apply the code POLLSTORONTO or POLLSOTT to their Uber account before ordering their ride. The code will then apply to the next two trips, so you can get to the polling station and home (or back to work) without having to shoulder the cost of transport there and back.

UberX launched in Toronto in September and Ottawa in early October, and the company is currently recruiting drivers in Calgary. The company has faced criticism from the City of Toronto over driver and passenger safety. The Insurance Bureau of Canada has also warned those considering signing up as a driver that their personal insurance won’t be enough if they get into an accident.