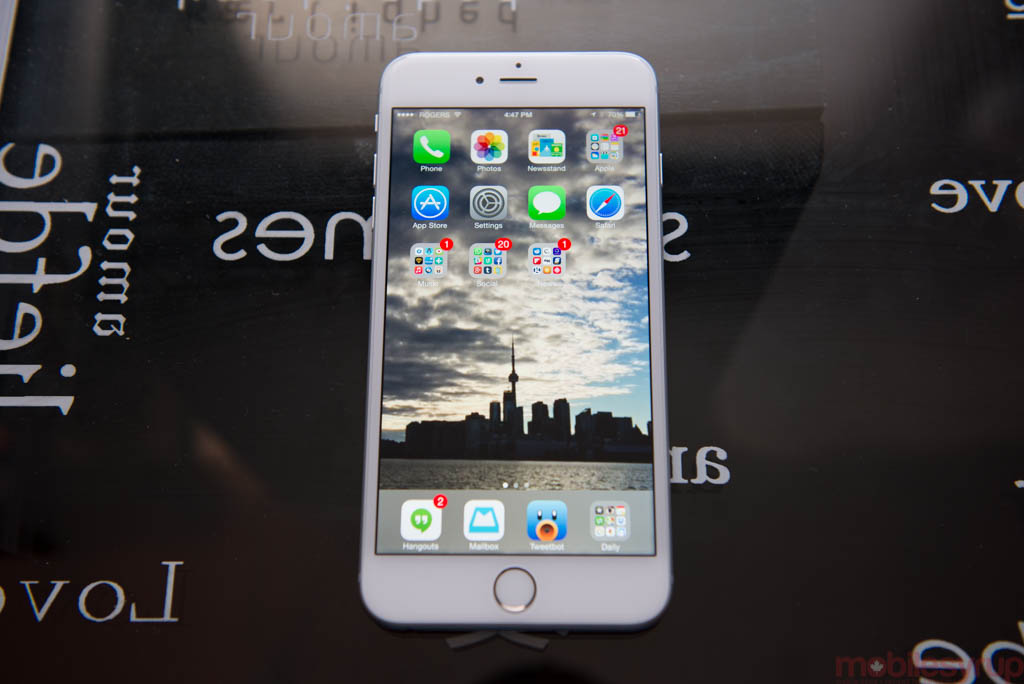 Before the iPhone 6 Plus was announced, the tallest phone I’d used recently was one Huawei Ascend Mate 2, the mammoth handset that perpetuated the notion Android was moving in one direction, Apple in another.

No longer. With Apple ceding enough potential market share, especially in phablet-obsessed Asia, to the Samsungs, Lenovos and Huaweis of the world, the iPhone 6 Plus was a foregone conclusion even before September 9th. 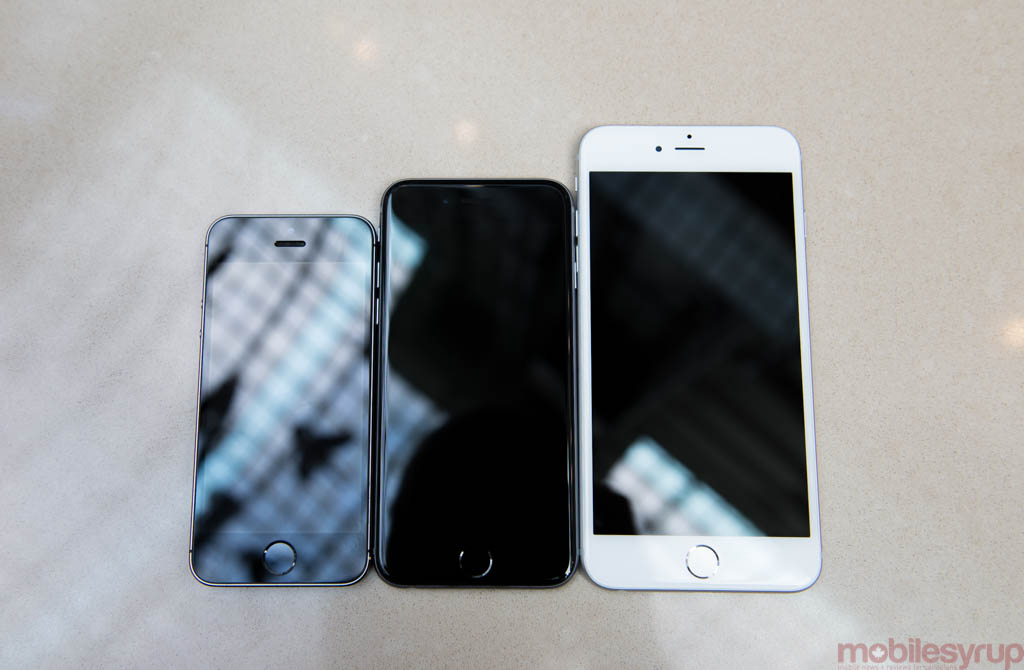 What I didn’t expect was just how immense the iPhone 6 Plus feels, even compared to market-leading phablets like the Samsung Galaxy Note 3, OnePlus One, LG G3 and other 5.5-inch-plus devices.

It’s the height: at 158.1mm tall, it’s a full 4.6mm taller than the upcoming Galaxy Note 4 which, small on paper, makes a big difference to the way the phone balances in the hand, never mind fits in the pocket. 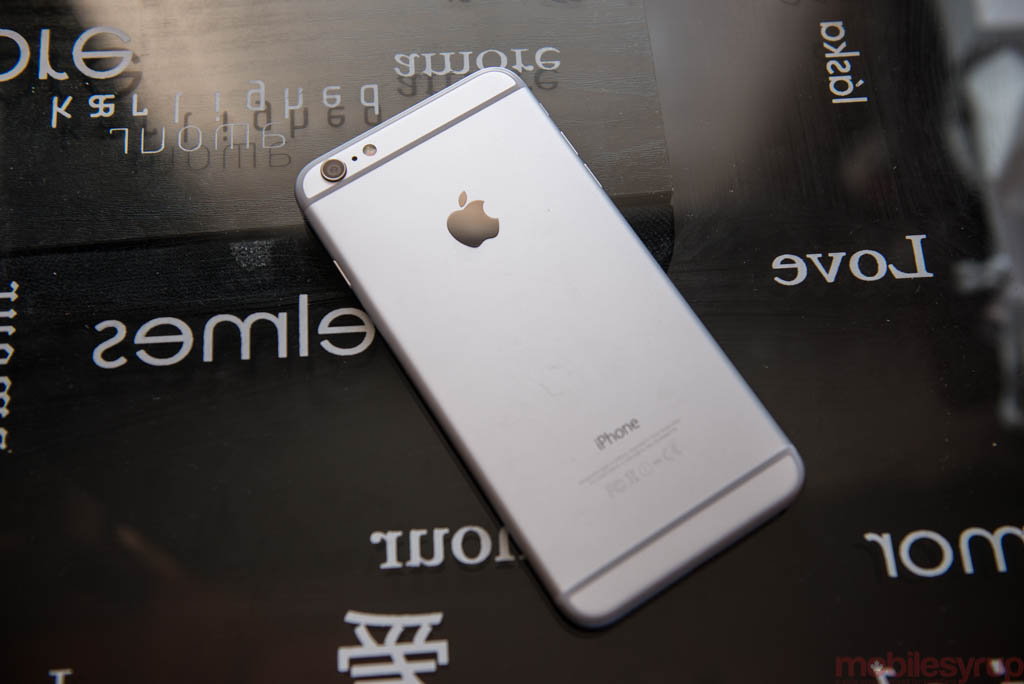 Using the iPhone 6 Plus with one hand, like most devices this size, is a non-starter: it just won’t work. Even with Apple’s half-measure Reachability setting, the device is a two-paw necessity, which almost immediately divides its potential audience into two camps.

I think that most people will, especially at first and likely indefinitely, find the iPhone 6 Plus too big but, like we did with the first Galaxy Note and its subsequent sequels and copies, lovers of its extra screen real estate will grow accustomed to it.

The size of the iPhone 6 Plus, which has a 5.5-inch 1920×1080 pixel IPS display for an Apple-leading screen density of 401ppi, makes it great for certain tasks like typing long documents or consuming text and video, but performing quick single-handed tasks — receiving and tapping out a quick response to a text, for example — will likely be slower.

I’ve grown used to having to readjust the position of my hand on larger devices, tenuously repositioning the chassis in my palm to reach certain areas of the screen — and haven’t dropped a single one yet (knock on wood) — but iOS is better positioned to prevent this.

Because most apps now conform to the system-wide swipe-from-the-left gesture to return to the previous menu, and app tabs tend to near the bottom, iOS 8 doesn’t involve as much awkward hand gymnastics as Android. But the sheer size of the iPhone 6 Plus demands more attention to be paid to hand position in general. 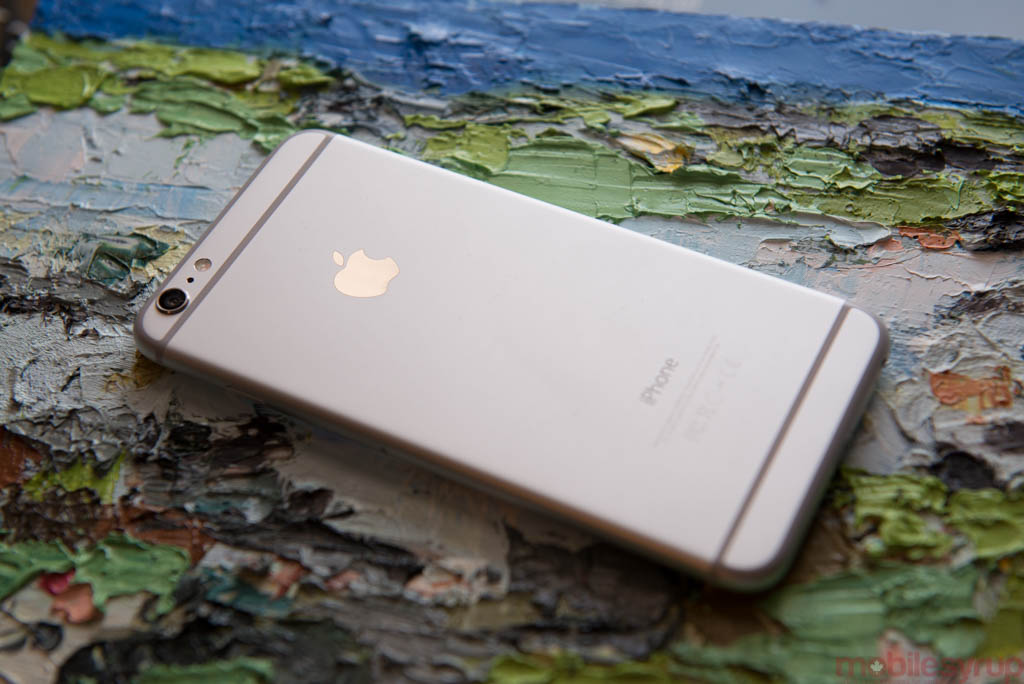 The camera sports optical images stabilization, which has already proven extremely useful in low-light situations on stationary subjects (moving subjects will still blur, because physics); and the larger battery means the device, even with a higher-resolution screen, lasts longer on a charge. From my two days of constant use, I’ve rarely seen the device go below 40% before the day is over — a significant upgrade from any previous iPhone. I have no doubt I could get two days from this thing with moderate use. 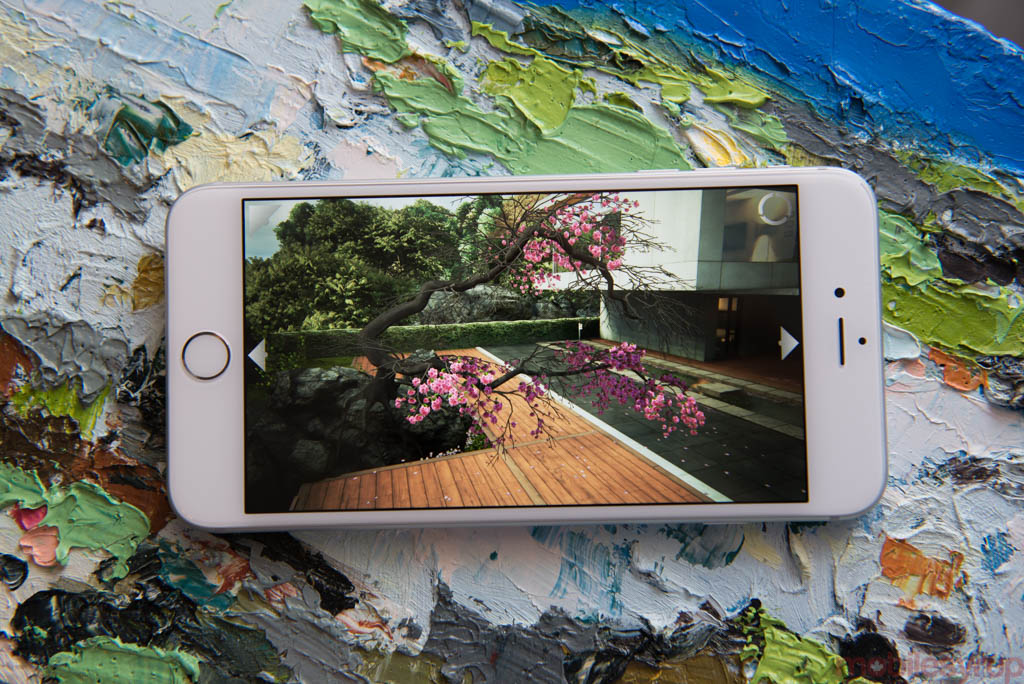 Aside from the occasional “Why are you holding up a tablet to your face?” looks when making calls, the iPhone 6 Plus will be the ideal iPhone for many people.

It has a greater chance of turning the heads of Android users than the far more iPhone-like iPhone 6, since its higher-resolution display and battery boost, in addition to its industry-leading A8 chip, may appeal more to “spec heads”. 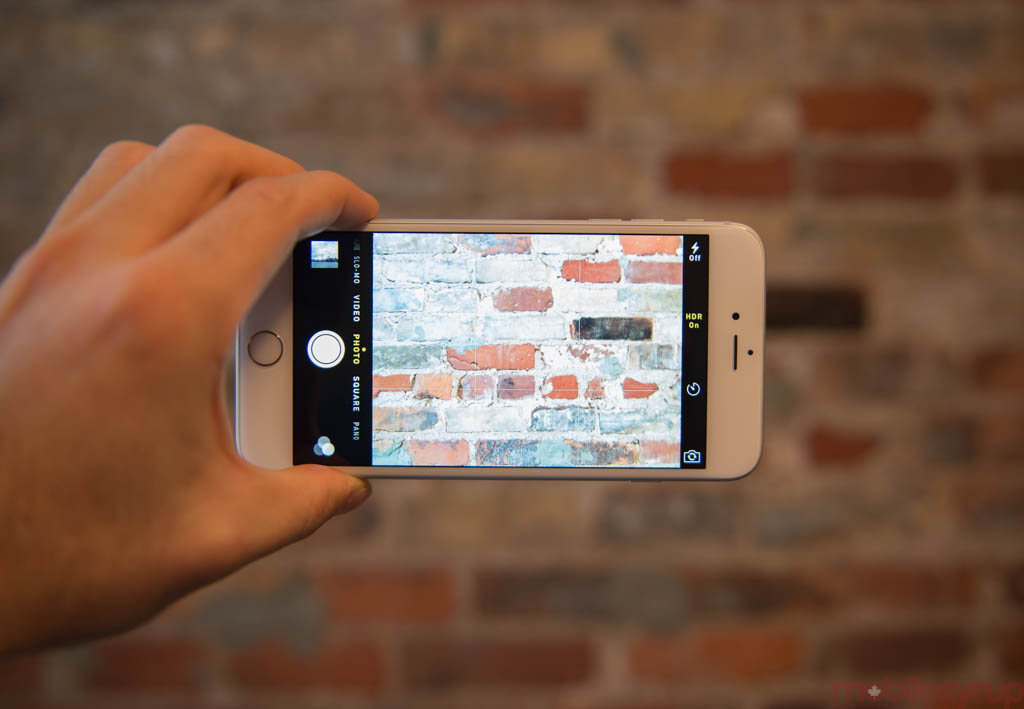 In fact, day-to-day use the iPhone 6 Plus feels unfamiliar, even by iPhone standards, and will force Apple loyalists and Android fans alike to relearn how to use it. iOS 8 is familiar, sure, but the phone’s size forces one’s brain to start from scratch and adjust to using an iPhone much like an iPad.

I even believe that Apple could have included those iPad-specific gestures on the iPhone 6 Plus without risking any consumer confusion: It’s easy to squeeze five fingers together on the large screen to return home, and swiping four fingers up from the bottom to bring up the multitasking menu is no struggle, either. 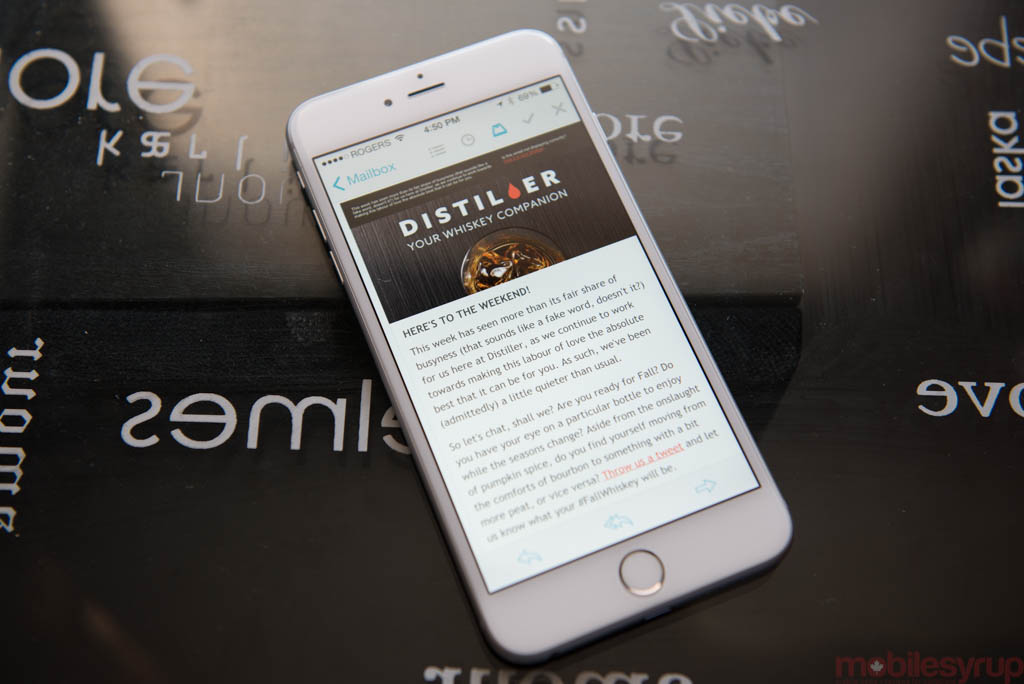 The main issue with the iPhone 6 Plus is likely its price: beginning at $375 on contract for the 16GB model and rising to $595 for the 128GB version, the 6 Plus doesn’t offer the same value proposition as the regular model: its buyers will be making a deliberate choice to go with the bigger iPhone, and that many will have likely shopped around beforehand. 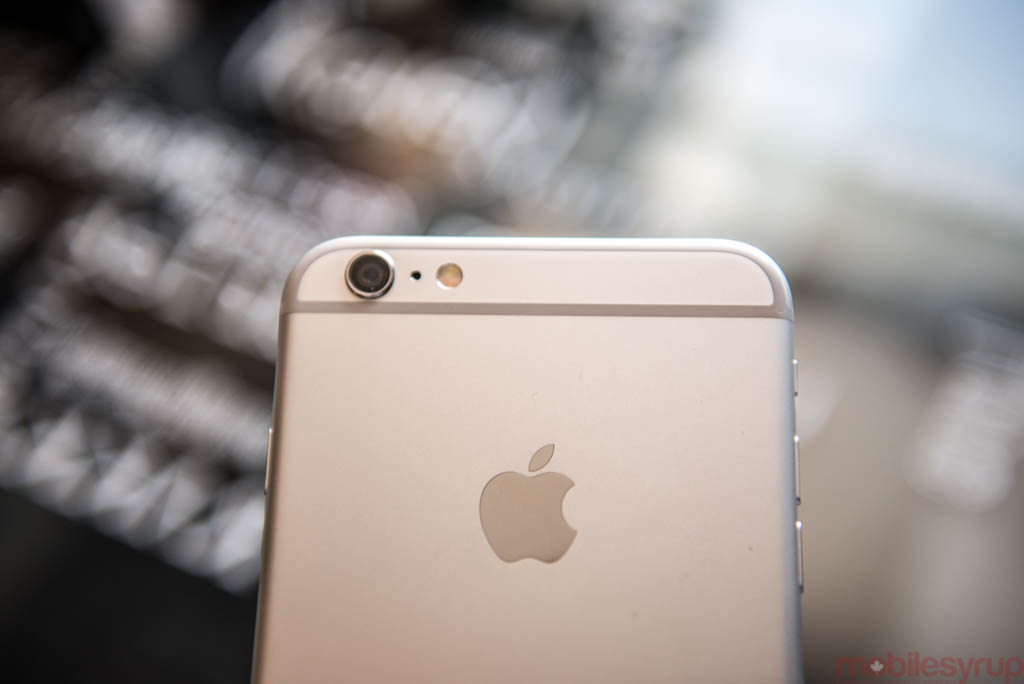 While many Android phablet users will likely give the iPhone 6 Plus a look, it’s unclear how many of them were merely waiting for Apple to create a larger iPhone, or how many are too entrenched in the Play Store ecosystem to switch camps. The iPhone 6 Plus is not a sure bet the way its smaller counterpart is sure to be, too.

And until the app ecosystem catches up to the hardware — only a small number of apps have been redesigned to take advantage of the larger screen real estate — software on the iPhone 6 Plus is largely just blown-up versions of existing iPhone 5s apps. This, of course, will shortly change, but from what I can tell the iPhone 6 Plus is going to be a confusing and likely difficult proposition for many potential buyers.

We’ll be diving deeper into the iPhone 6 Plus in the coming weeks, but this is the strangest, most interesting and unexpected iPhone I’ve ever used.