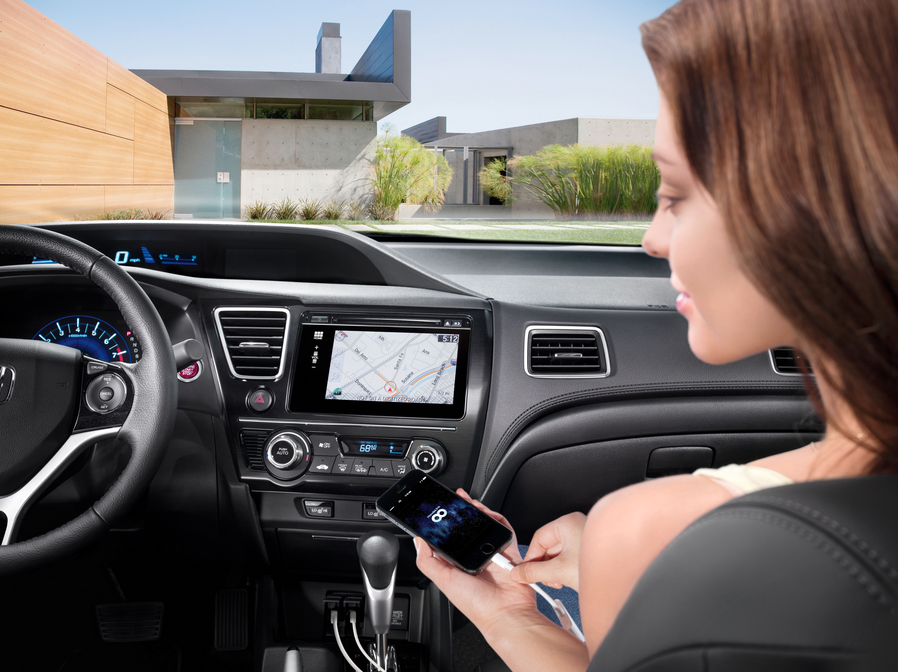 Honda has unveiled a new-look interface and what it says is improved in-car connectivity that would make it easier to integrate smartphones — particularly the iPhone — into the automaker’s vehicles, starting with the 2014 Honda Civic EX and higher.

The company announced the details in a Google Hangout it held today that focused on what it has in store for increased compatibility, including Siri “Eyes Free”, in its future models. The 2014 Civic and 2015 Honda Fit will seemingly get preferential treatment as the guinea pig cars, but features like Eyes Free will be rolled out to a number of vehicles in both the Honda and Acura lineups starting the New Year.

HondaLink will be the centrepiece of the company’s strategy to ingratiate drivers who want to use features from their phones without having to constantly grab the device. Sporting a large 7-inch HD touchscreen, the integrated head unit will have the new proprietary Display Audio software wrapped around the functionality made possible by the HondaLink platform. The capacitive touchscreen will offer standard swipe, tap and pinch-to-zoom in what Honda suggests will be a highly intuitive display.

App icons will “resemble” those seen in smartphones, though it’s not clear to what extent third-party apps will ultimately be available moving forward. Instead, Honda played up the four “specialty” iOS apps that will anchor it at the outset. These will be compatible with the iPhone 5, 5s and 5c, while a rollout to include Android versions is expected to come sometime in 2014.

The Connect App will be a core app for accessing services that include location search, weather and messaging, along with car-specific tools like maintenance reminders, service scheduling and the owners guide.

The Navigation App will be the first time Honda includes a cloud-based nav app that includes 3D maps and continuous traffic updates, except that it will cost $59.99 from the App Store, as it’s not included in the cost of the car. The app itself uses mapping data from HERE, owned by Nokia, which includes searching points of interest, storing previous locations and route planning in advance from the phone and pushed to the vehicle screen. Naturally, it also has voiced turn-by-turn directions with spoken street names.

What isn’t clear is whether other GPS navigation apps on iOS can work the same way. There are a number of them, some free like Waze and NavFree, others not, like TomTom and Garmin, so it remains to be seen how those will be handled.

The Aha App basically leverages the existing app on iOS to offer audio content, which can range from Internet radio stations, audiobooks, podcasts, Twitter and Facebook updates. If you already use Aha on your iPhone, then you should be able to see your favourites and other settings reflected on the larger vehicle display, though Display Audio doesn’t actually mirror one screen to the other.

The Launcher App will be the home of all Honda-approved third-party apps, of which none have been announced yet. Since it would be Honda’s own API, developers would have to create an app specifically for HondaLink, even if it’s meant to integrate directly with the original one on iOS. This is a curious choice for Honda, given that it’s been a failing strategy for just about every other car manufacturer. Rather than make Display Audio Android-based, for instance, the company decided to go its own way.

One thing Display Audio will also feature is Siri Eyes Free, enabling access to Apple’s personal voice assistant without touching the iPhone. After pairing the phone with the system via Bluetooth, drivers can press and hold the “Talk” button on the steering wheel to issue commands. The variety of functions include making and taking calls, dictating and sending messages and email, having incoming messages and email read aloud, setting reminders and calendar entries, checking weather and sports scores and receiving and posting tweets and status updates to Twitter and Facebook.

Honda is not the first to integrate hands-free Siri into a vehicle, as GM already had it in the 2013 Chevrolet Spark, Sonic and Trax, but it is the first Japanese automaker to go that route. Initially, the 2014 Civic, 2014 Accord and 2014 Acura RDX and ILX models will have the feature as a built-in accessory at the dealer level.