Hello gMessage! Next version of Google Hangouts will almost certainly integrate with SMS 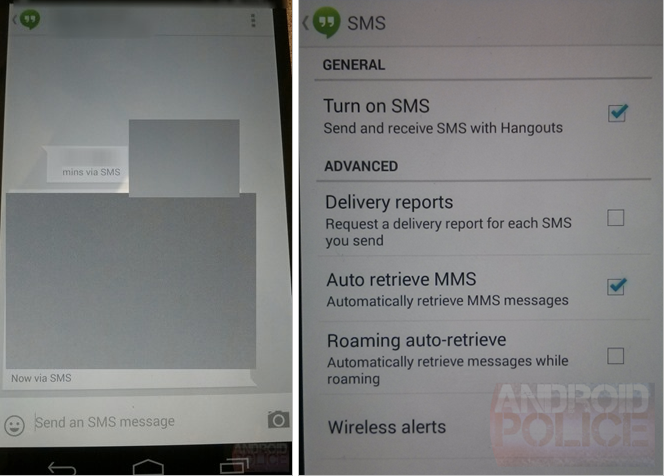 File this one under “It’s about damn time!”

The next version of Google Hangouts for Android will likely replace the stock Messaging app with a single, unified Hangouts version that detects whether the respondent is also using Google’s new multi-platform chat-and-conference service, and if so will send the message over data, and if not will send it via SMS.

The revelation was made by Android Police who, after hearing rumours of the service consolidation in Android 4.4 KitKat, received some pretty convincing screenshots showing Hangouts sending messages “via SMS.”

Such integration makes sense from a technical level, too. Hangouts already asks to verify your phone number to ensure easily lookup when searching the database of users; going one step further, it’s easy enough to see that same integration being used to facilitate Hangouts messages, even if the person you’re messaging isn’t in your phone book.

While most Android users already have a number of messaging services in their repertoire, the integration of SMS and Hangouts at a base level makes a lot of sense. Google+ began with its own messaging service until Hangouts came along last June, and Google is well known for its excellent and reliable web integration.

The fundamental question is whether this will be an Android 4.4-only thing, and how it will work with previous versions. It’s not like Google can update Play Services and all of a sudden hundreds of millions of Android users have a single, unified SMS app. More likely, Hangouts, like many third-party SMS apps, will ask to become the “default” and take over the role of the stock messaging app. Nexus devices will probably receive an update to remove the legacy Messages app and go forth with just Hangouts.

Another important rumoured inclusion in the Hangouts app is video sharing, which until now has been limited to photos.

This is all speculation, of course, until it actually happens. Shouldn’t be too long now.