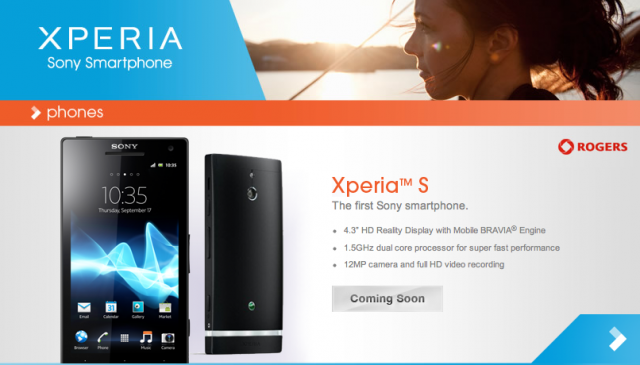 Looking for one of the next devices to land on Rogers? It could be the upcoming Nokia Lumia 900 LTE that is “coming soon”, possibly on April 10th. But another device is en route. Sony Mobile Communications – formerly Sony Ericsson – has just posted a picture on their Facebook page that clearly states that Xperia S is heading to Rogers.

It was just yesterday that Sony stated the Xperia S “is shipping globally“… no word of when it will actually arrive, as usual it’s “Coming Soon”, but it should land sometime in April. Highlighted specs of this Android have it coming OS 2.3.7 (will be upgraded to OS 4.0 Ice Cream Sandwich), a 4.3-inch display (720 x 1280), 1.5Ghz dual-core Snapdragon S3 processor, 1GB RAM, 12MP camera that captures 1080p HD videos, NFC and Playstation certified. We’ll have more info soon – in the meantime check out our hands-on here.

Update: Here’s a bizarre twist to this story. The link below now leads to the general Sony Facebook page and the Xperia S and accessories (including the SmartWatch and NFC Smartags) have been removed. Rogers even sent me an email stating that “I can confirm that while this device will work on the Rogers network, we will not be selling it directly“. We’re also hearing that Sony will be selling this directly in the Sony store, possibly unlocked. Perhaps we’ll hear more next week.