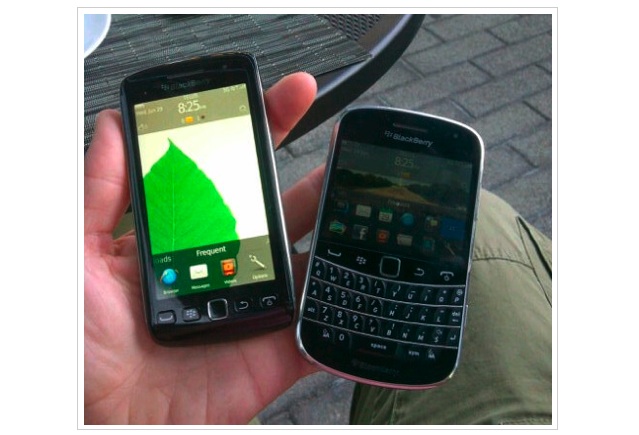 It’s expected that all major Canadian carriers will show RIM the love and bring on their upcoming devices. Apart from the announced Bold Touch 9900, many of RIM’s unannounced devices have already been leaked online. The only missing details are which carriers will release the various devices and what the confirmed launch dates are. A couple weeks ago a picture of a Bold 9900 and Torch 9860 showed up online with TELUS branding, then further confirmation came late last week when Bell’s upcoming BlackBerry lineup was revealed.

As for specs, the Torch 9860 rumoured to come with a 1.2GHz processor, 768MB RAM, 3.7-inch WVGA touchscreen display with a resolution of 800×480, a 5 megapixel camera that records 720p videos, runs BlackBerry 7 OS and comes with Wi-Fi. The BlackBerry Torch 9810 (Torch 2) is packed with a 1.2GHz processor, 3.2-inch display and has the familiar slider that reveals the QWERTY keyboard. The Bold Touch 9900 is similar as it comes with a 2.8-inch touchscreen and QWERTY keyboard (full video overview here). Finally, we’ve been given word that the BlackBerry Curve 9360 could also be making an appearance by late September, possibly under the name of “Bellagio”. This is the entry level BlackBerry that has a 2.4-inch display (480 x 360 resolution), 800 MHz processor, 5 megapixel camera, Wi-Fi and powered by BlackBerry 7.