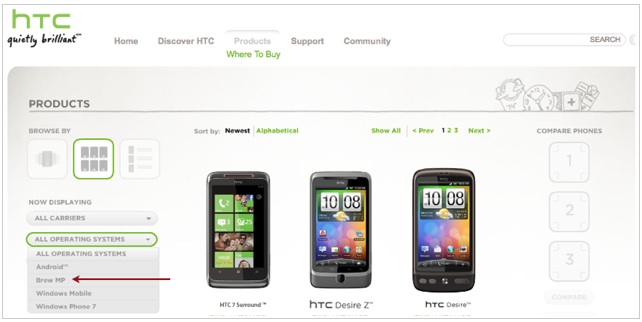 Taking a look at the HTC site this morning shows a new entry in the drop down menu for the OS. Listed are the usual platforms such as Android, Windows Phone 7 but a new one has surfaced on the Canadian side that show Brew MP (Qualcomm’s new operating system).

There is no word on which device will launch as it states that “Oops! No phones were found that match your filtered criteria. Please simplify your selected filters.:)”. However, reading over a recent AT&T press release from CES for the HTC Freestyle states that “By installing Brew Mobile Platform across quick messaging phones, which traditionally have had operating systems specific to each device maker, developers can write an application once and be able to offer it to all Brew Mobile Platform based phones from AT&T. AT&T also announced that America Movil and Rogers Wireless have agreed to use Brew Mobile Platform, giving developers access to customers throughout the Americas.”

No official word if this is the device that will be launching, but seems likely. We’ll have more info soon.