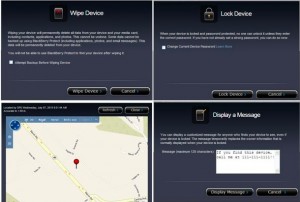 RIM has announced that their “BlackBerry Protect” will be released in a “limited beta” next week and then officially available in an “open public beta later this year”. This is a free security application that basically give users the ability to wirelessly backup, restore, locate, remote device lock and remote wipe your BlackBerry device.

We’ve seen this in a leaked screenshot before so it;s nice that this is finally making its way to your Berry.

Check it out here over at BlackBerry
Via: CrackBerry