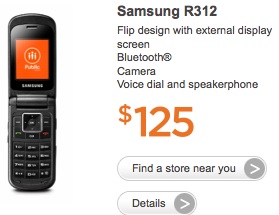 Public Mobile is now officially live with their service in Montreal. They are one of Canada’s newest wireless carriers and are heavily targeting to reach the “value conscious” segment. Public now has a total of 74 stores: 31 in Montreal and 43 in Toronto.

There big selling feature is to offer Unlimited Talk and text with no contracts or credit checks. No word on how many people have signed up but they have the capacity to capture 19 million customers. It also seems like Public is getting the attention they are looking for. They recently signed a distribution partnership with Gateway Newstands and raked in a $350 million financing deal with ZTE.

Alek Krstajic, Chief Executive Officer of Public Mobile said in a release today that “We want to give the people of Montreal an economical option. For the first time, people in Montreal can have a cell phone with unlimited talk and text at a predictable price.”

We’ve also noticed they have price dropped their first device. The Samsung R312 was originally $130 at the Toronto launch and is now dropped by $5 to $125. Keep dropping those prices… this is the best “economical option” for customers.