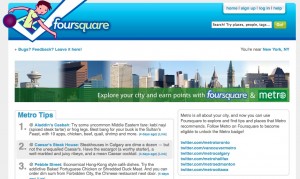 Metro has become the world’s first news outlet to partner with social media mobile app Foursquare. If you are unfamiliar with Foursquare it’s a free location-based social network mobile app that lets users “check-in” to the places you hang out… then let’s you inform your friends of where you are. Built in as gaming aspect where you can get badges and depending on how often you visit a location you’ll eventually get the title of becoming “Mayor” of that spot.

Where Metro comes in is with their reviews of city attractions and restaurants. So let’s say you are walking by a restaurant and Metro has reviewed it, you’ll automatically get an alert or what they call a “tip” with a link to the full Metro review on their website.

To promote the program Metro is giving away 5 iPhone 3GS devices over the next 4-weeks in their paper edition where Foursquare players who follow Metro and check-in near where they pick up Metro will get a Metro Foursquare badge and be automatically entered into the contest.

Jodi Brown, Marketing and Interactive Director for Metro Canada said “Metro has always offered readers the right information at the right time and place, and Foursquare lets us take that to the next level. We’re now highlighting specific articles at the exact time and place that they’re most useful, which is in some ways a revolutionary idea.”