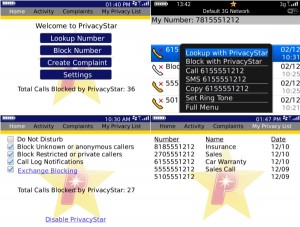 The National Do Not Call (DNCL) List has been available for well over a year now and well over 7 million Canadians have signed up. The idea behind the list is for people to sign up to stop unwanted calls/faxes from telemarketers. The list has been under speculation for many reasons ever since it launched… the main reason is that some people have signed up and unfortunately have been getting more calls.

A new BlackBerry app called “PrivacyStar” has made its way to Canada and it can assist in blocking unwanted calls and identify unknown callers. The app goes a step further to see Telemarketing violations and report unwanted telemarketing violators to regulatory enforcement authorities.

The app is free for the first 30 days but after the trial period if you want it it’ll cost you $2.99 (USD) per month. Get the app here from the BlackBerry AppWorld

Complaints from Canadians lead to $420,000 in fines for non-compliant telemarketers