Ontario bans cellphone use while driving! 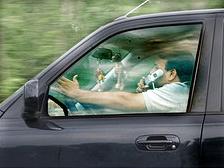 It was not that long ago that this was only speculation. Today the Ontario government officially passed Bill 118, “Countering Distracted Driving and Promoting Green Transportation Act” that bans people from using hand-held communication and entertainment devices while driving. This law will take effect this fall.

The Bill states “Driving while holding or using a hand-held wireless communication device or electronic entertainment device is prohibited. Use of such devices in the hands-free mode is exempted.”

Transportation Minister Jim Bradley said “We want drivers to focus on the task of driving: driving safely must always be a driver’s primary task and responsibility: anything less is unacceptable. Eyes on the road, hands on the wheel – it is one of the basic tenets of safe driving”.